Regal unabashedly calls the 36 a “day yacht” due to her many amenities and luxury treatments. She’s not made for overnighting, there are other models in the stable for that, but days and nights will certainly take on a new realm of entertaining when stepping aboard this engaging platform. 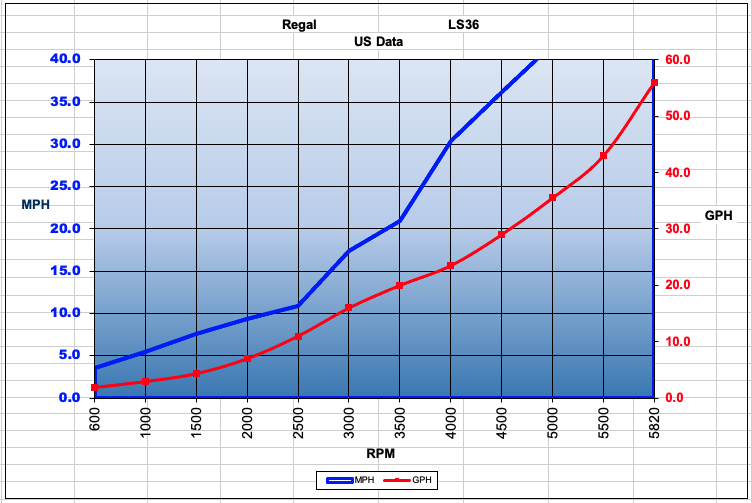 The LS36 is the largest in Regal’s fleet of luxury bowriders.  The LS is a sterndrive and it’s the model we tested but it also comes in an outboard version which then carries the LX designator.  Rather than differentiate between the two, for the sake of this report, we’ll just refer to the two models together as the “36".

Ergonomics played a big part in the design and layout of the 36. As we sit in the seats, the seatbacks are noticeably and properly reclined. A person at the grill is not impinging on the flow of people moving through the deck. The layout seems to encourage flow rather than inhibit it.

Further, the main deck of the 36 has the versatility to be either open or closed, making this a true three-season boat.  Or, to look at it another way, a multi-latitude boat.  Someone from New England or the Pacific Northwest will enjoy the shoulder seasons with the main deck closed up, while the boaters in the southern climes and the Bahamas will open up the hardtop, the walk-through windshield and the side windows and seamlessly blend the inside with the outside.  Such is the versatility of the 36.

One of the most welcome features, however, must be the addition of the companion multi-function screen.  Imagine cruising along the coast and the beginnings of hunger start to take hold across the family.  Rather than have the captain have his eyes on the screen sorting through the passing harbors looking for a waterfront restaurant, imagine the companion to port doing it.  Then plotting the course to the harbor entrance.  Or how about checking the Sirius weather screen while cruising along.  The list of benefits that sharing the workload can bring are far too numerous to be listed here.  Now to be clear, if the kids are messing with that screen, the captain still has the ability to lock it out from the navigation functions.

Regal’s 3300 is definitely a hugely popular boat for the company and her owners are a devoted bunch to the brand.  But, when it’s time to move up to something with the same mission statement of entertaining in style rather than weekending, there was nowhere to go… until now.  The LS36, with its “day yacht” catchphrase, is just the ticket those 3300 customers were looking for.  It adds another 3’4” (1.01 m) to the LOA and 2’2” (.66 m) to the beam of the 3300 and a whole new layout that drives the point home that this is a whole new boat, not a stretched version of the same.

The 36 has a variable degree deadrise hull so she handles well in calm water, but you get her in the shop in about 1’ (.3 m) chop that we had and that's where she really shines.  Put her at about 30 mph and that's where she's got a comfort level and she just eats the stuff up.

There are three engine choices for the LS36.

We can enter the cockpit from the starboard side door that measures 19” (48.26 cm) and it’s held open by a magnetic catch.  It’s conveniently at a level that matches the dock or even another boat’s deck.  A reboarding ladder can be put into place for use as a dive door.

Starting with the aft seating, it wraps around the port quarter in an L fashion.  The aft seatback adjusts into two positions that convert the aft sunpad into a chaise lounge.  Additionally, there are two cushions in the lower half of the sunpad the lift into “rumble seat” style for an aft-facing seat at the swim platform that runs 53” (134.62 cm) fore and aft. It’s covered in SeaDek nonskid ($1,420). There’s a rail along the trailing edge that swimmers can hold onto as well as a concealed reboarding ladder to the starboard side.  A better reboarding solution is the optional Power Step ($4,200) that also serves as a nice place to relax in the water.

The cockpit is spacious and includes opposing L-shaped seating.  Two tables are optional ($1,820).  Immediately, the fit and finish that we're used to seeing with the brand is evident with the patterned stitching and custom embroidery.  Of course, there’s storage underneath the seats. Flip-down armrests are to both ends of the starboard side seating.

Ahead is a galley area and it’s fully featured for a day on the water.  It includes a solid surface counter, an electric grill ($1,680) and a bin that is covered with a cutting board. There's a sink and a waste receptacle.  Underneath, double doors open and then slide into the sides to expose a 13.1-gallon (49.59 L) Yeti cooler on a slide-out tray.  Overhead is an optional electrically actuated drop-down 32” (81.28 cm) TV ($2,250).  What’s attractive about this whole area is we can work at the grill without interfering with the walkthrough or, frankly, the whole social zone.  It still stays wide open while we're in this area.

At the 29” (73.66 cm) walkthrough between the helm and observer’s seats, there’s a refrigerated drawer to one side and storage drawers to the other.  Owners can opt for this arrangement, a refrigerated drawer to both sides, fridge to one side and freezer to the other or even two freezers.  It’s all up to the owner and it’s all standard.  No upcharge.

The forward half of the cockpit area is under the protection of the hardtop but more on that in a moment.  If the sun becomes too much to bear, an electrically actuated Amerishade sunshade extends from the trailing edge of the hardtop and runs all the way to the aft limit of the cockpit seating.  This is also on the long list of standard features for the 36.

As we take a first look at the forward consoles, the first thing we notice is a continuation of the remarkable number of standard features on this boat, this time in the form of the three 16” (40.64 cm) screens, including one for the observer station so the observer becomes an active part of operating this boat.   We also have joystick functionality with any of the three engine choices on the LS model.  At 38” (96.52 cm), the helm seat is double-wide and includes a single flip bolster.

Now, all this is under the protection of a hardtop so we can have excellent climate control for operating under cool conditions.  Conversely, if we want to bring the outside in, we have two windows on the side that slide open manually.  There’s also a sliding window and opening air dam at the walkthrough to the bow.  But the most innovative is the opening sunroof.  At the front is a diverter, so if we open the roof just a little, the air coming in hits the diverter and gets directed right onto the occupants of the forward seats.  Why no one has thought of this before is a mystery but it’s a stroke of genius.  Of course, if we want we can open it up all the way and let the sunshine in.  Too much heat?  Then close everything up and activate the air conditioning ($6,995) with vents right at the helm panel.  The bottom line is, whatever way we want to control the climate on this boat, the options are there.

By sliding the port console door over, we can access the head.  It features 58” (147.32 cm) of overhead clearance, 41” (104.14 cm) of sitting headroom, another solid surface counter with a sink on top of that, and an electric flush toilet… all standard.  Additionally, we have the ship's AC power panel and a separate Seakeeper panel here.

Coming through the 24” (60.96 cm) walkthrough to the bow, the supports for the windshield double as handrails. Where we usually see a big, heavy windshield that's hinged, this one is on a slider so it’s much easier to open and close.  There’s a wind dam underneath.

This leads us to another social zone with two double-wide facing forward seats flanking the walkthrough with flip-down armrests to the inner ends.  There's a cushion over on the port-hand side that turns that seat into a lounge. Ahead is a bench seat all the way across that's aft-facing.  Recessed into the bulwarks, there are beverage holders, grab rails and connectivity. There are padded bolsters going all the way around and there are full-length grab rails on top of the caprails.  There are receivers just forward of those grab rails that will accommodate supports for a Bahama Sunshade ($1,815).  At the forepeak, there’s an anchor locker under a hatch that conceals a standard anchor windlass with chain and rope rode.  An all-chain rode upgrade ($885) is offered as an option.

Now again with storage… it’s under each of the seats, plus if we pull the starboard seatback forward, we access another compartment.  Regal calls this a Quarter-berth.

It’s large enough for a couple to crawl into and spend the night, plus there’s an optional mattress ($850) that can be utilized.  Otherwise, it’s a cavernous storage space that can be made even more efficient with the addition of a Utility Storage System ($1,170) that adds shelving to the port bulkhead.  Frankly, if you want to have the same size boat with the ability to overnight, perhaps Regal’s 36 Grand Coupe is the model to consider.

Regal isn’t kidding around when they keep calling this a day yacht.  The LS36 is so loaded with features that make it an ideal upscale dayboat.  While it’s not for everyone, it’s certainly for the discriminating buyer that Regal appeals to.  It’s also impressive how many features, that are optional on other boats, are standard on this one.  Does it drive the price up?  Probably.  But they’re items that are also going to be purchased anyway so the fact that the builder is being upfront about it right at the get-go is saying something.  They’re not drawing a potential buyer in with a lower price tag and then tacking on everything the buyer actually wants.  It’s all there right from the start.   And it’s also available in an outboard version, the LX36. 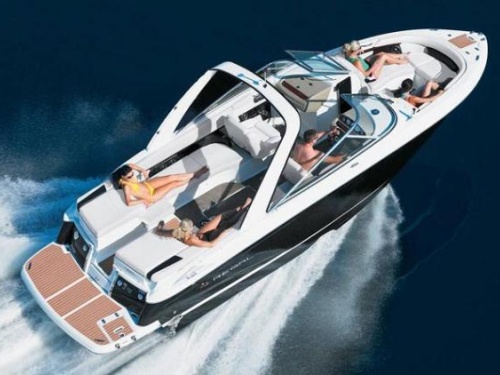 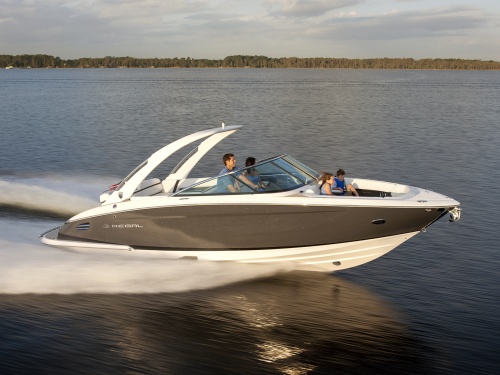 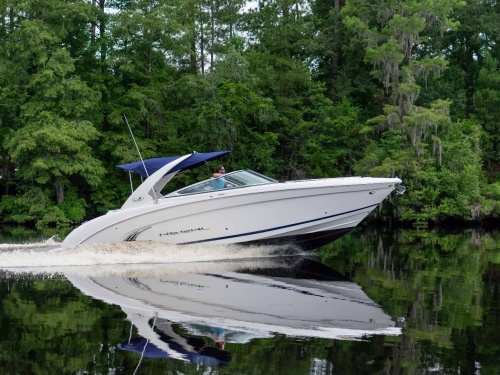 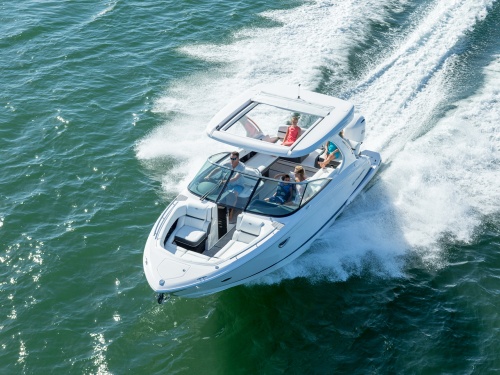