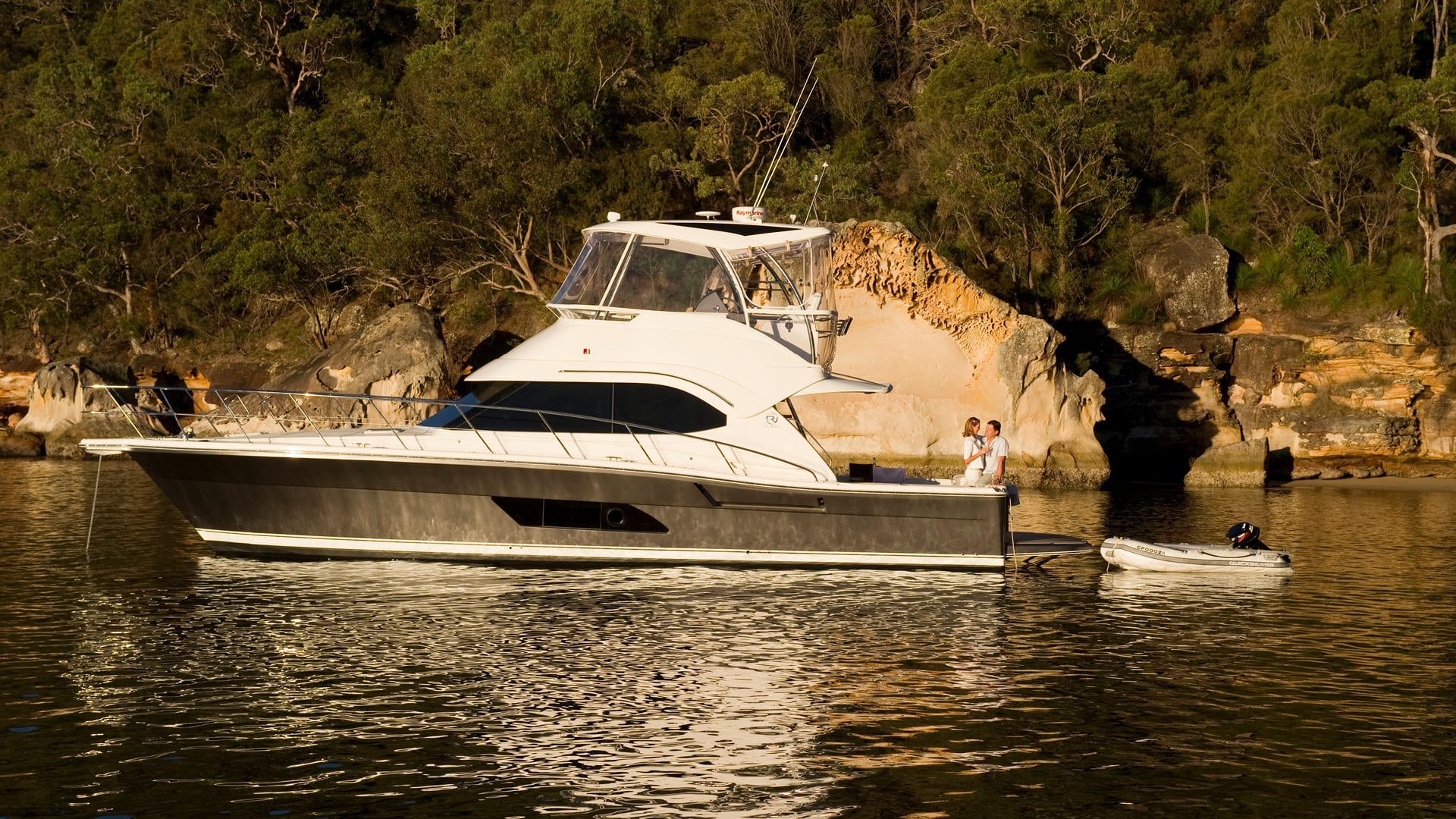 The Riviera 43 Open Flybridge is a reimagined cruiser built to the high standards of the Riviera factory in Australia.

Back in 2010, Riviera launched the first 43 Open Flybridge, and it was full of innovative features that have now become the norm.  Things like having the galley on the main deck and making the main deck single level… groundbreaking stuff then, but not so much now.  Fast-forward to today and the 43 has evolved into a very different boat.  One that signals Riviera’s commitment to its customers and the way boats should be built.

The 43 is boarded from the cockpit, and there’s a transom door if boarding via the swim platform and then into the cockpit.  Immediately there’s a sense of seamless integration with the forward stainless-steel framed door and the large window alongside both opened up to blend the inside with the outside.  Ahead is a raised mezzanine area with an aft-facing lounge to starboard that includes storage underneath.  To port is a cockpit refrigerator.  As is to be expected from a builder used to bluewater boats, the cockpit is left as an open palette for an owner to do as desired.  Most simply add removable deck chairs and perhaps a table to the al fresco dining area.  Storage is in the surrounding bulwarks and a large transom locker that can be optioned out for a livewell or even a cockpit grilling station.  Overhead, a stainless framed canvas extension provides the shade to the deck.  Stairs to the sidedecks are to port and starboard.

The main deck layout now features the galley aft.  Ahead, choose from a second helm station or a wetbar.  Dining is aft and to starboard. 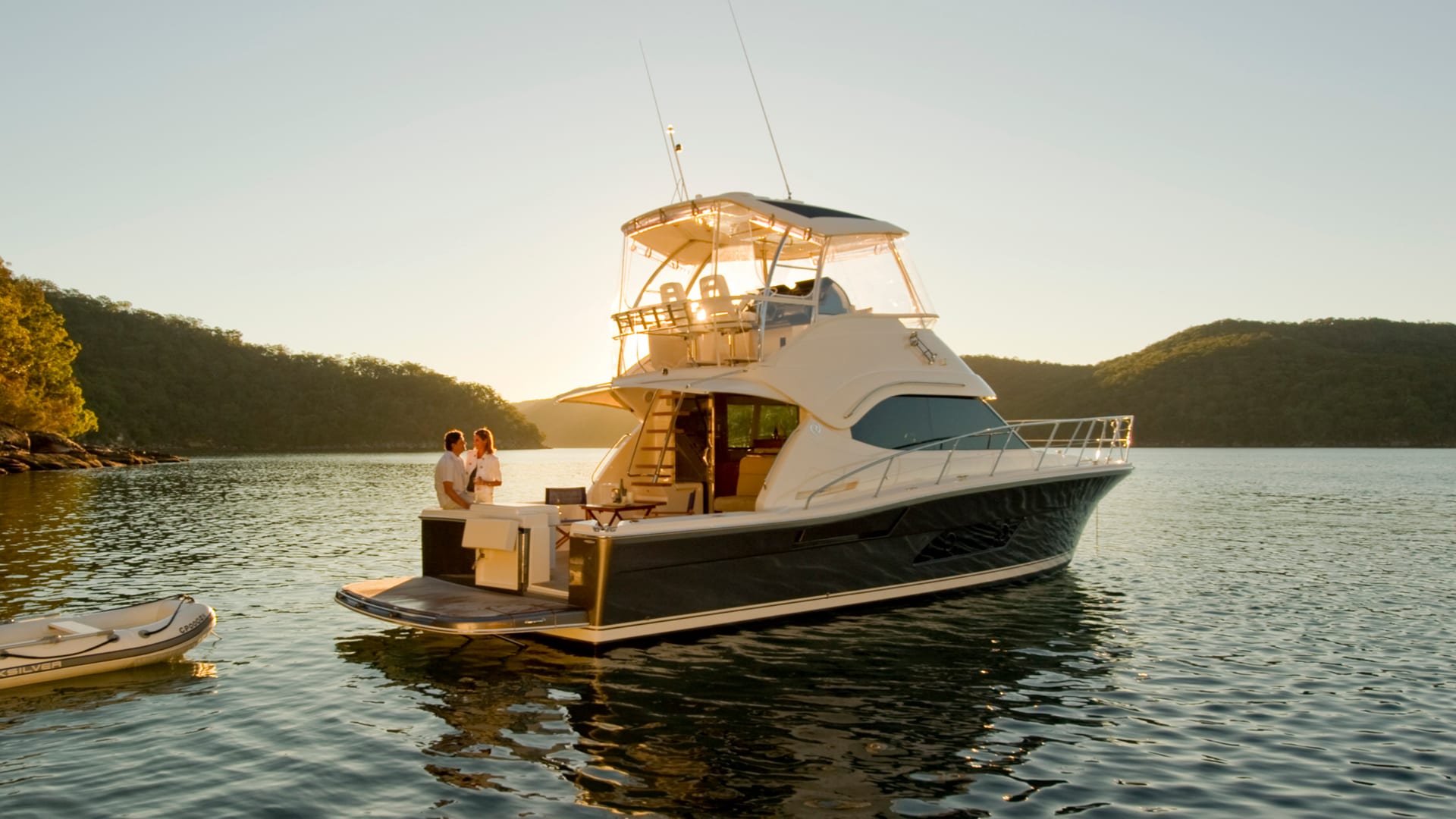 The swim platform is accessed from a starboard side gate at the rear of the cockpit.  Choose from a fixed or hydraulic platform that can launch a tender, or form a private beach. 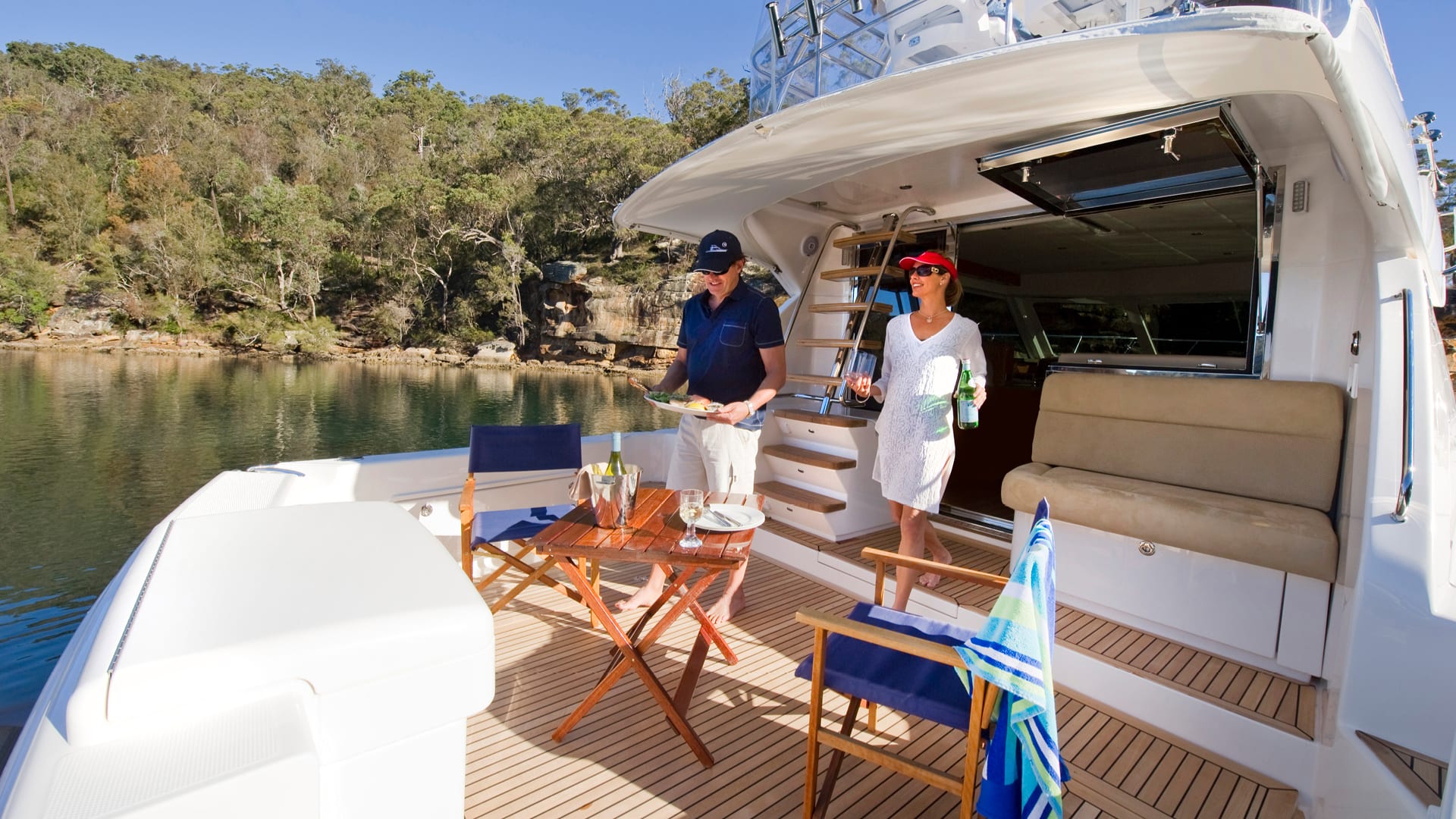 The cockpit deck is open with high bulwarks for safety.  Mezzanine seating is just ahead. 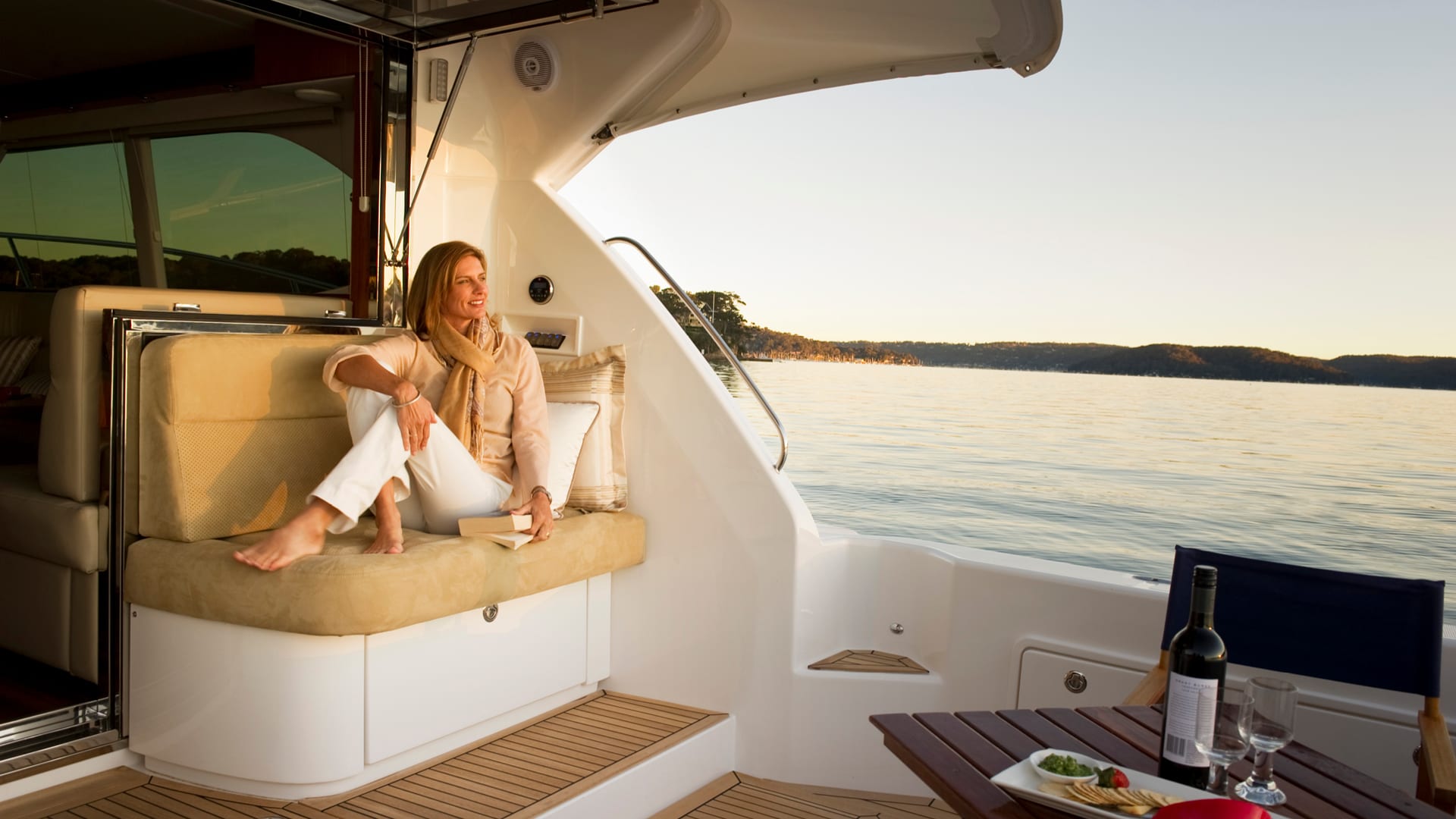 The cockpit lounge includes storage underneath.  Notice the stereo and lighting controls to the side bulkhead. 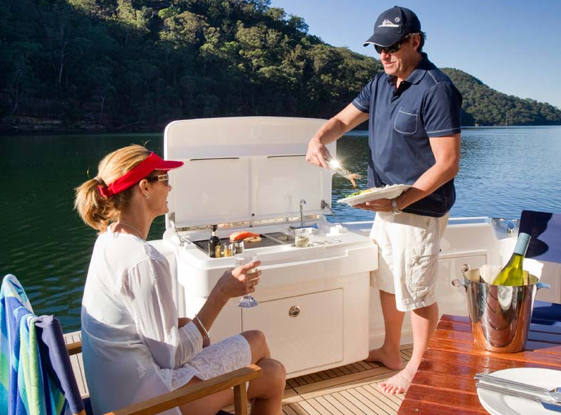 The transom storage can be optioned out as a livewell or outdoor galley with a sink. 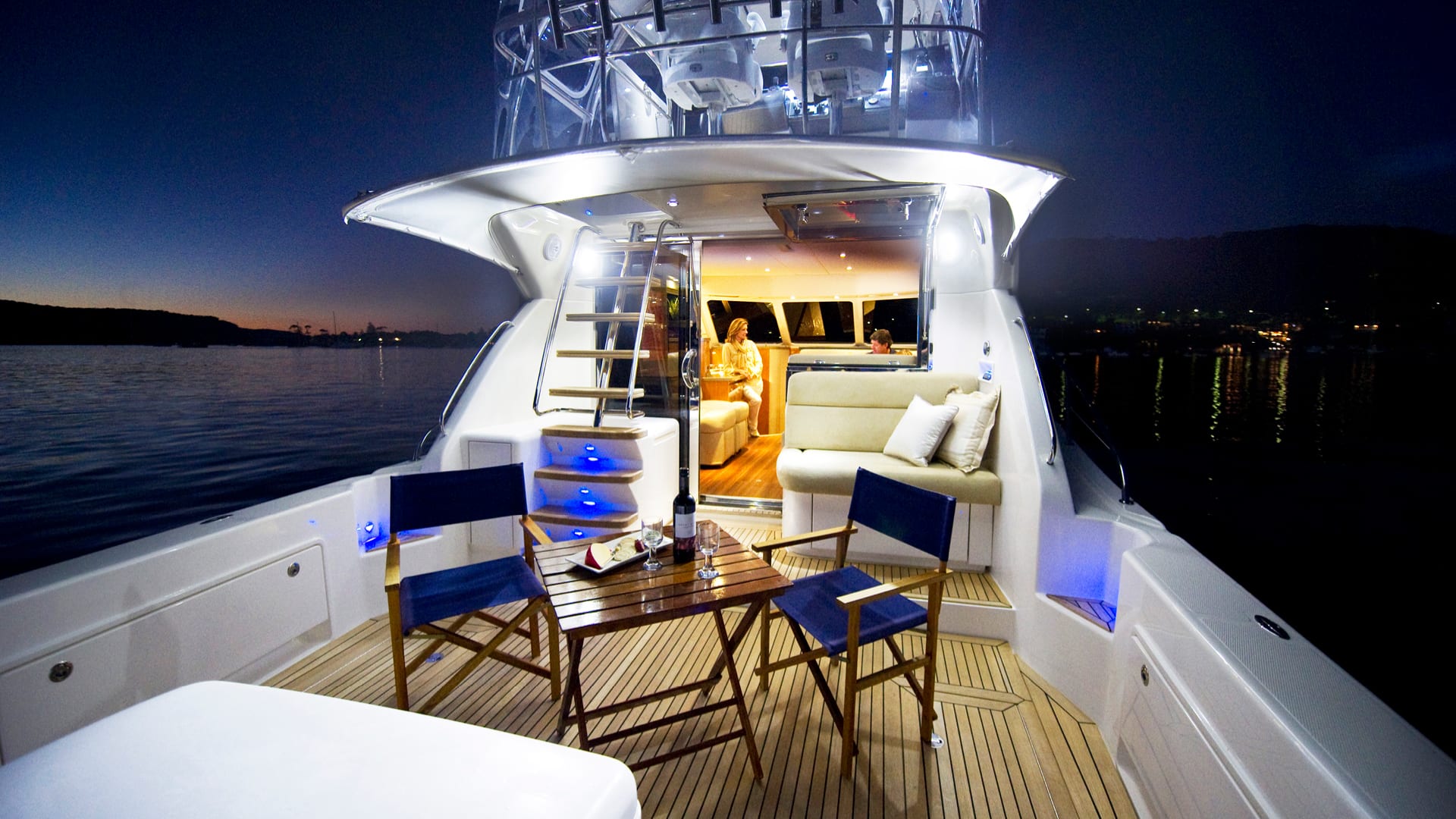 With the sliding glass door and large window opened, there’s a clear path to the forward windshields, with no bulkheads to interrupt the open space.

The center of the deck is reinforced to accommodate a fighting chair.  The entire deck is hinged from the rear.  An electrically-controlled hydraulic ram lifts the deck from the center to provide access to the twin 435-hp Volvo Penta IPS 600 engines.  Daily checks are via a hatch in the deck that also incorporates removable bins for storage. 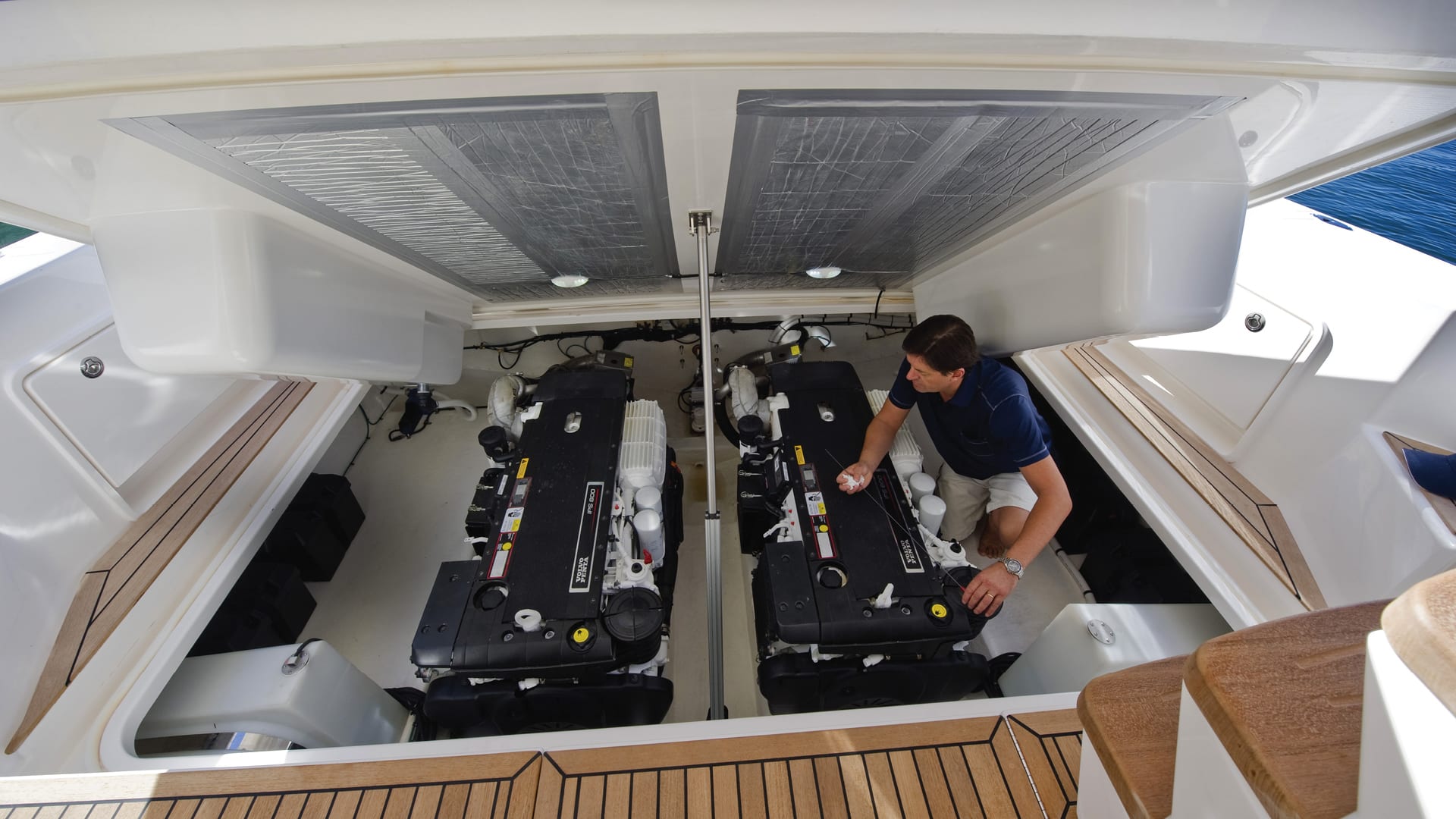 The entire cockpit deck lifts to provide full access to the engines.  A hatch is used for the daily checks.

The biggest change is that the galley has now been moved aft on the main deck.  This has become a huge trend and for good reason.  It keeps the galley between the two main gathering areas on the boat… the salon and the aft deck.  The former position of the galley, forward and to port, is now occupied by either an optional lower helm or two stools to form a breakfast bar.  Just ahead is a cocktail cabinet with dedicated glassware and bottle storage with refrigeration. 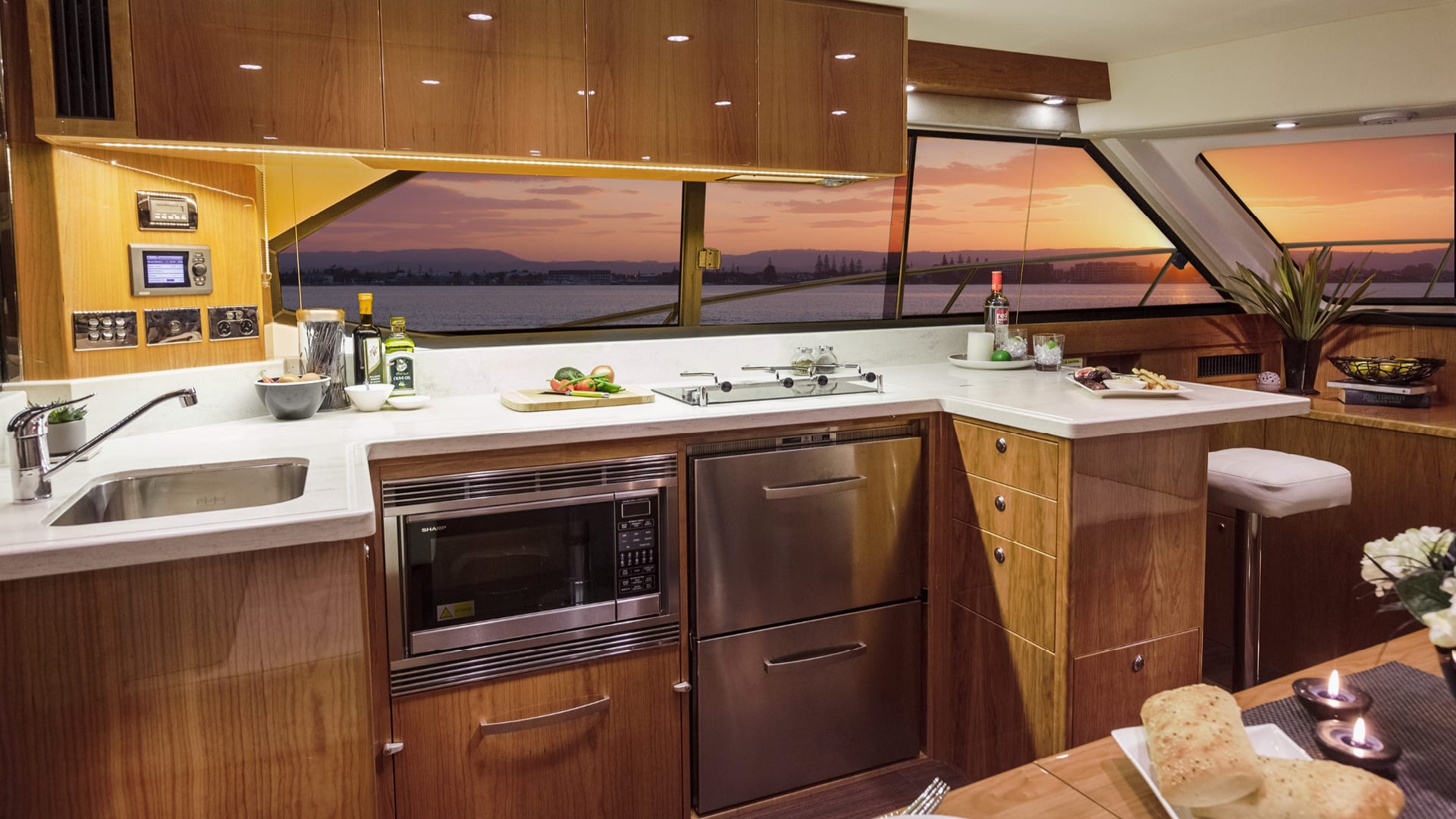 The galley is finished in gloss cherry wood with matching grains.  Notice the extractor fan over the cooktop as well as the opening side window.

The galley is well equipped with the usual cast of ingredients, such as the electric cooktop, stainless-steel sink, fridge/freezer drawers, convection microwave and plenty of storage both above and below the U-shaped Corian counter.  A dishwasher is on the options list for those truly aggressive cruisers that have full-blown meals aboard.

Across to starboard is the dining area, which is the same as in the original 43.  It consists of a U-shaped settee wrapping around a solid wood, and expandable, table on adjustable pedestals.  The whole deck is climate-controlled by the 16,000 BTU air conditioning. 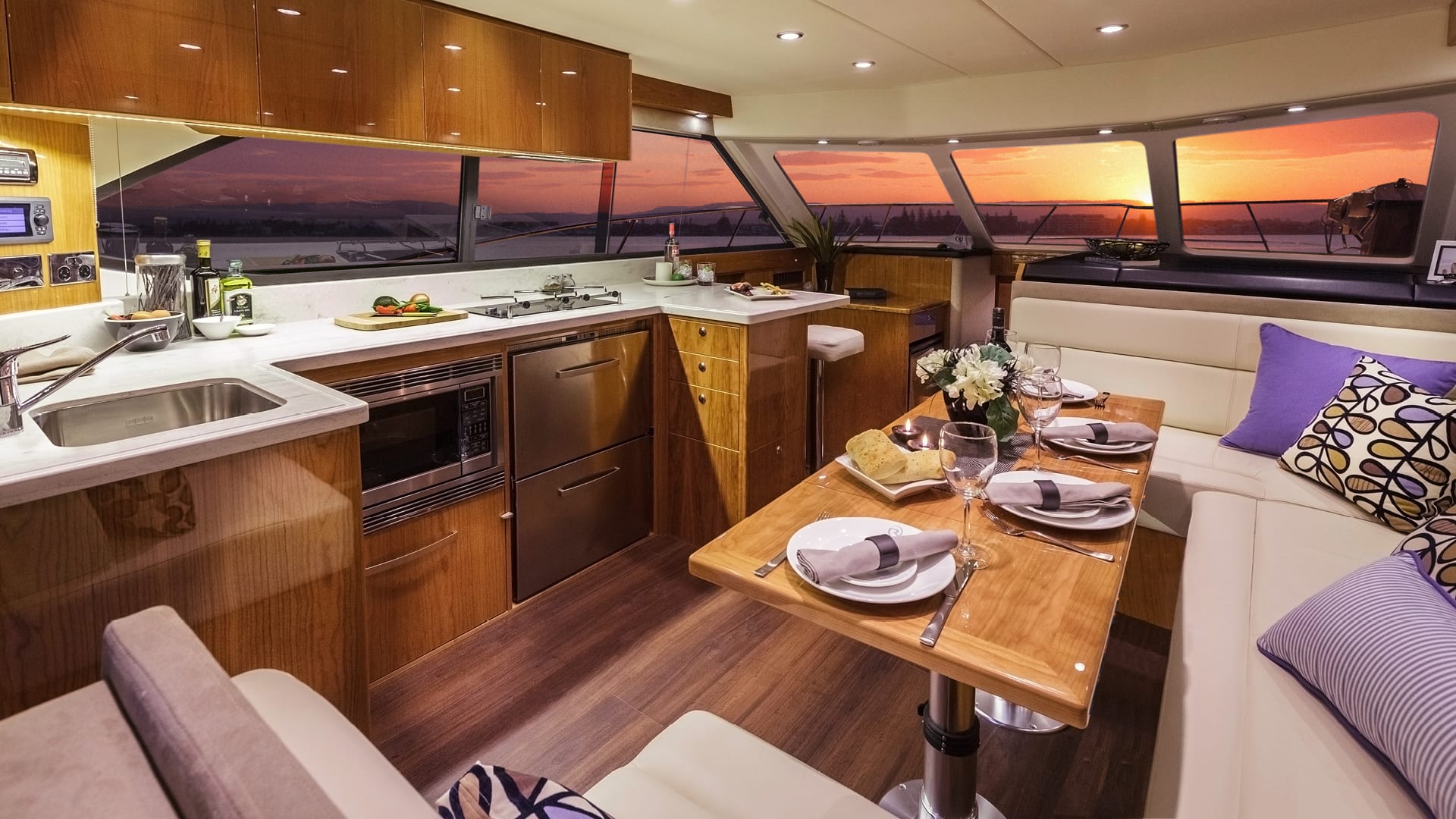 The dining area is to starboard.  The table has collapsible leaves.  Forward and to port is the wetbar if the helm option isn’t chosen. 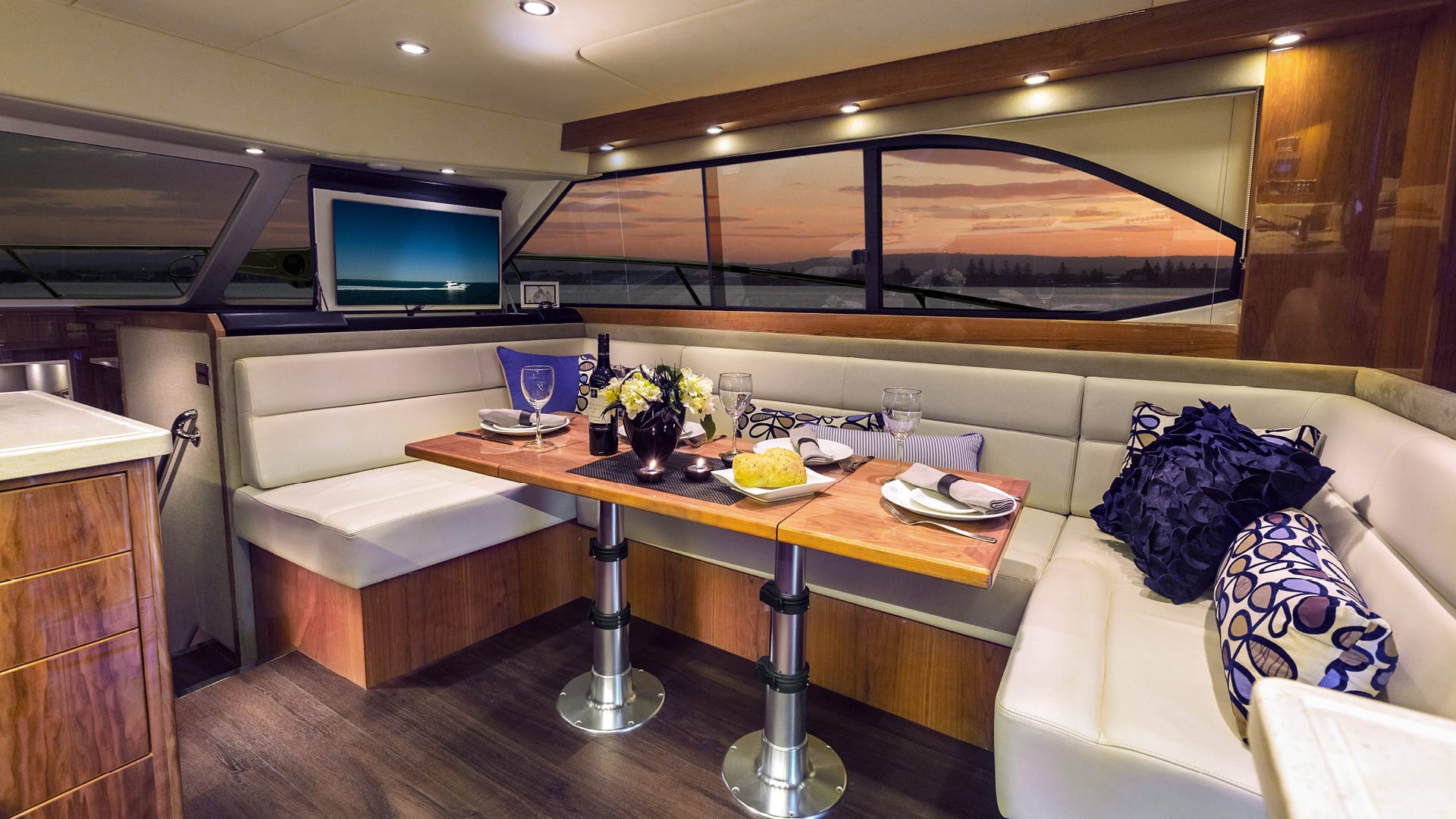 A TV lifts from the forward area.  Notice the table is on adjustable pedestals for conversion to a berth in a pinch. 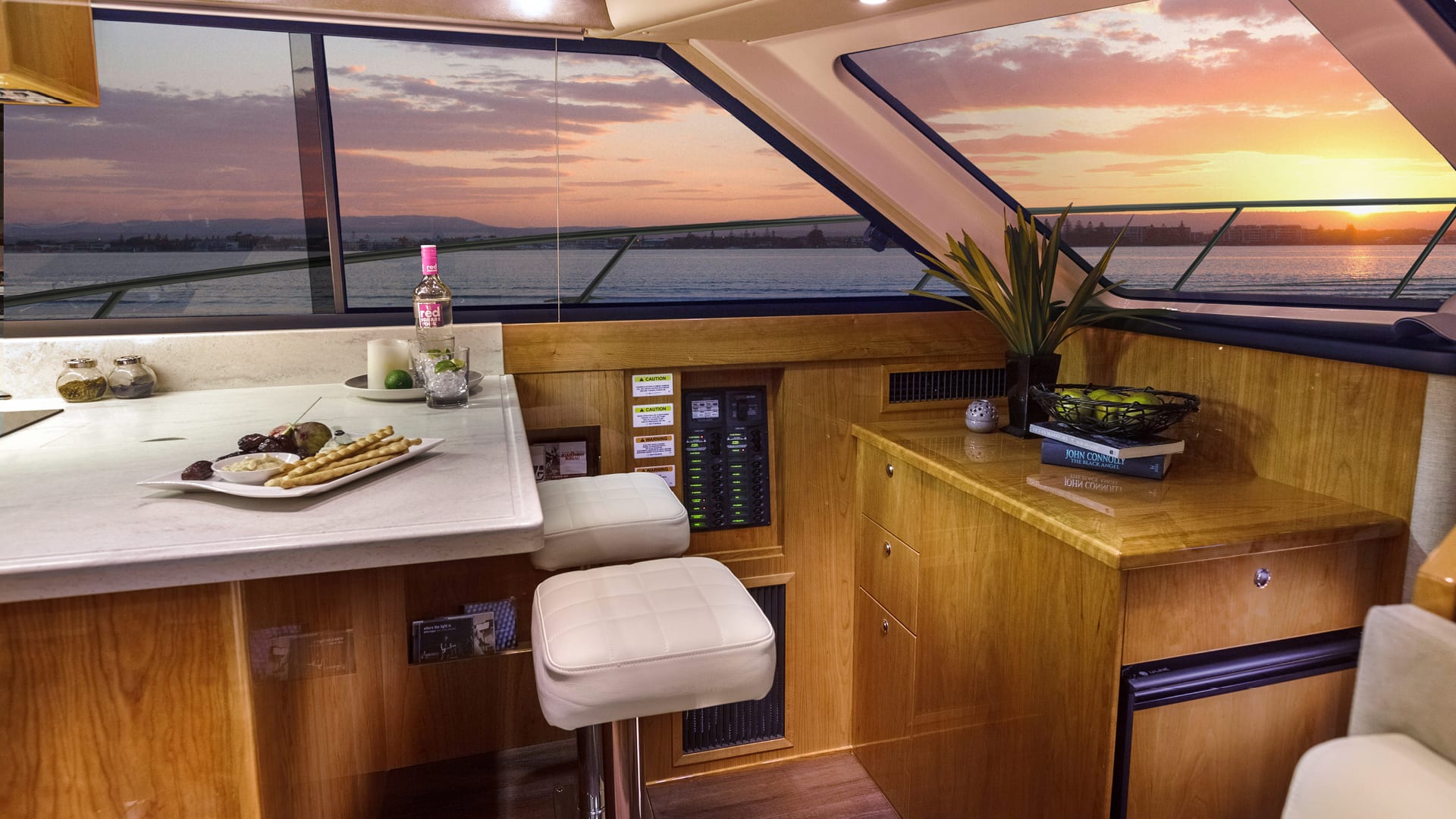 A wetbar includes a refrigerator.  The main electrical panel is to the outer bulkhead.  Stools can be fixed or movable.

The flybridge is accessed from a ladder portside and to the forward section of the aft deck, just over the cockpit refrigerator.  It’s a floating hardwood tread design.  As such, it does little to impede on the sightlines of the main deck.

The flying bridge is another entertainment venue with forward lounges ahead of an aft-mounted helm.

The helm console is positioned aft, giving not only excellent views to the front and sides, but also any action in the cockpit.  The helm can be customized to an owner’s desires with whatever array of electronics are favored.  The panel is large enough to support dual 16” (40.64 cm) multi-function displays. 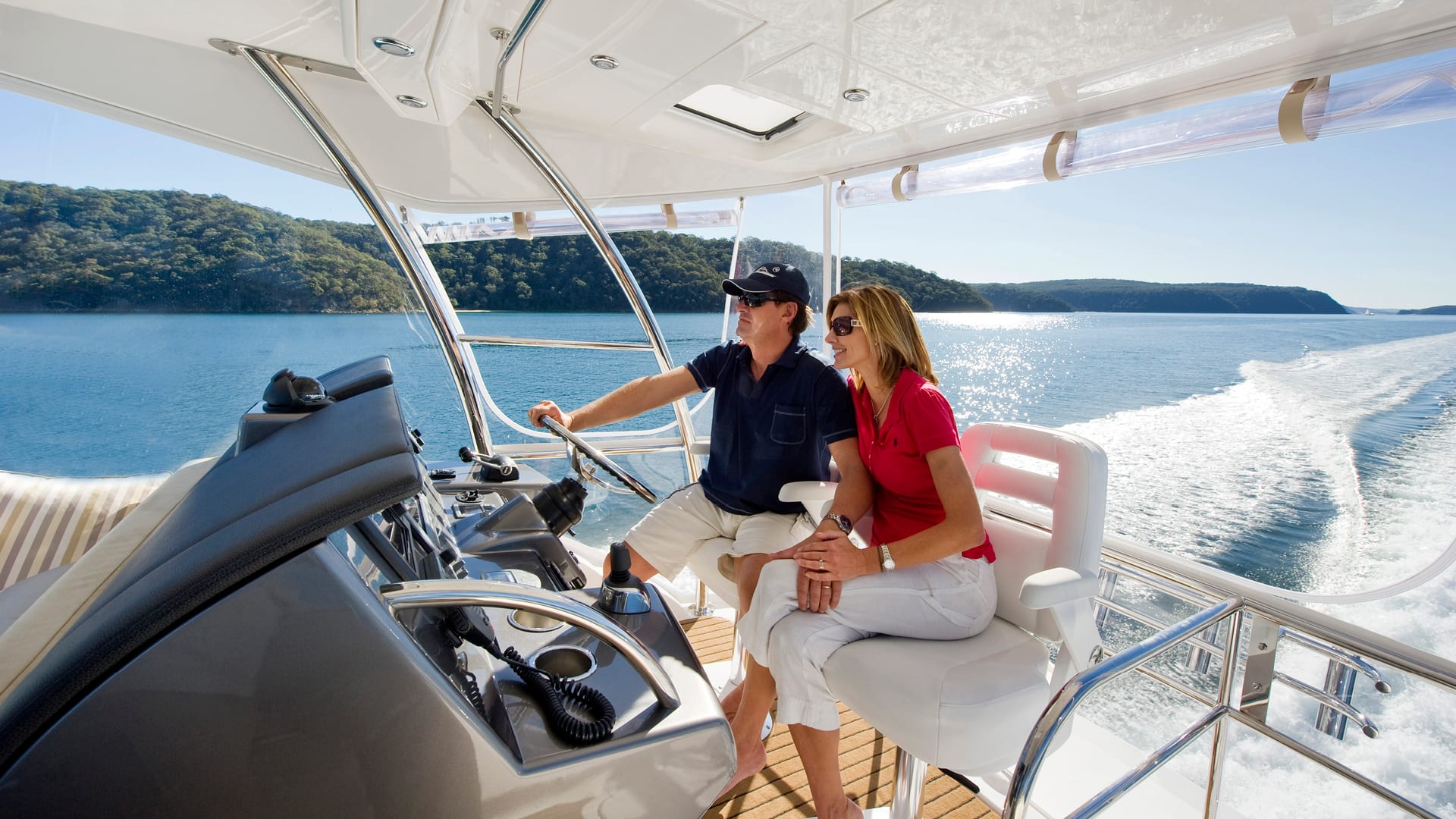 Notice the side extensions of the helm console that house the IPS joystick to one side and the digital engine gauges to the other.  All the Strataglass curtains can be rolled up.

The helm seats are from Pompanette.  Forward are twin lounges flanking table.  A portside bar module includes a sink and owner’s choice of refrigerator or icemaker.

Overhead is a solid GRP hardtop supported by stainless-steel stanchions. Since most will surround the area in a Strataglass enclosure, there is an opening hatch in the hardtop to keep air flowing. 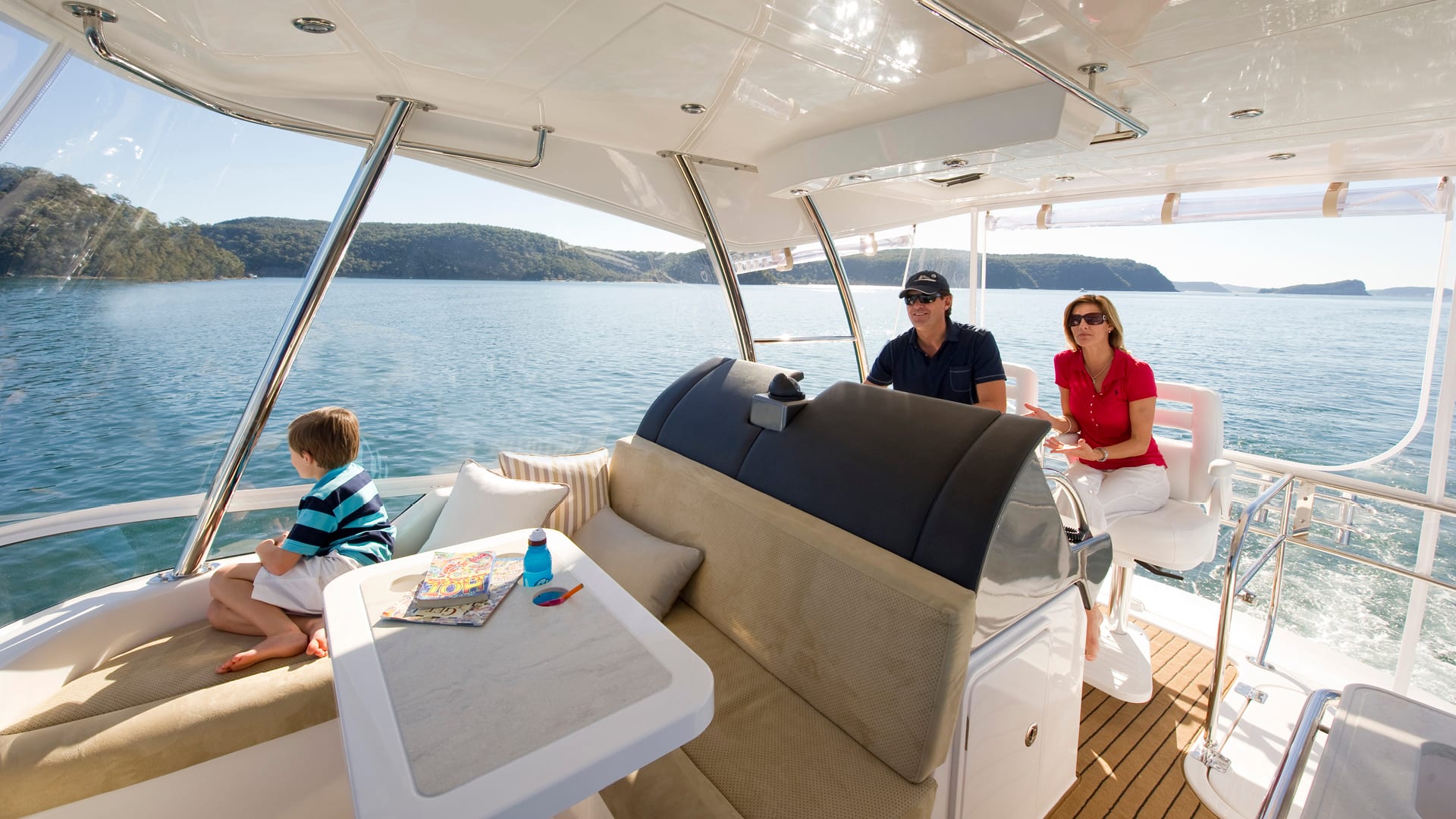 The starboard lounge wraps around a pedestal table.  Notice the overhead grab rails.  Storage is to the side of the helm console and under the seats. 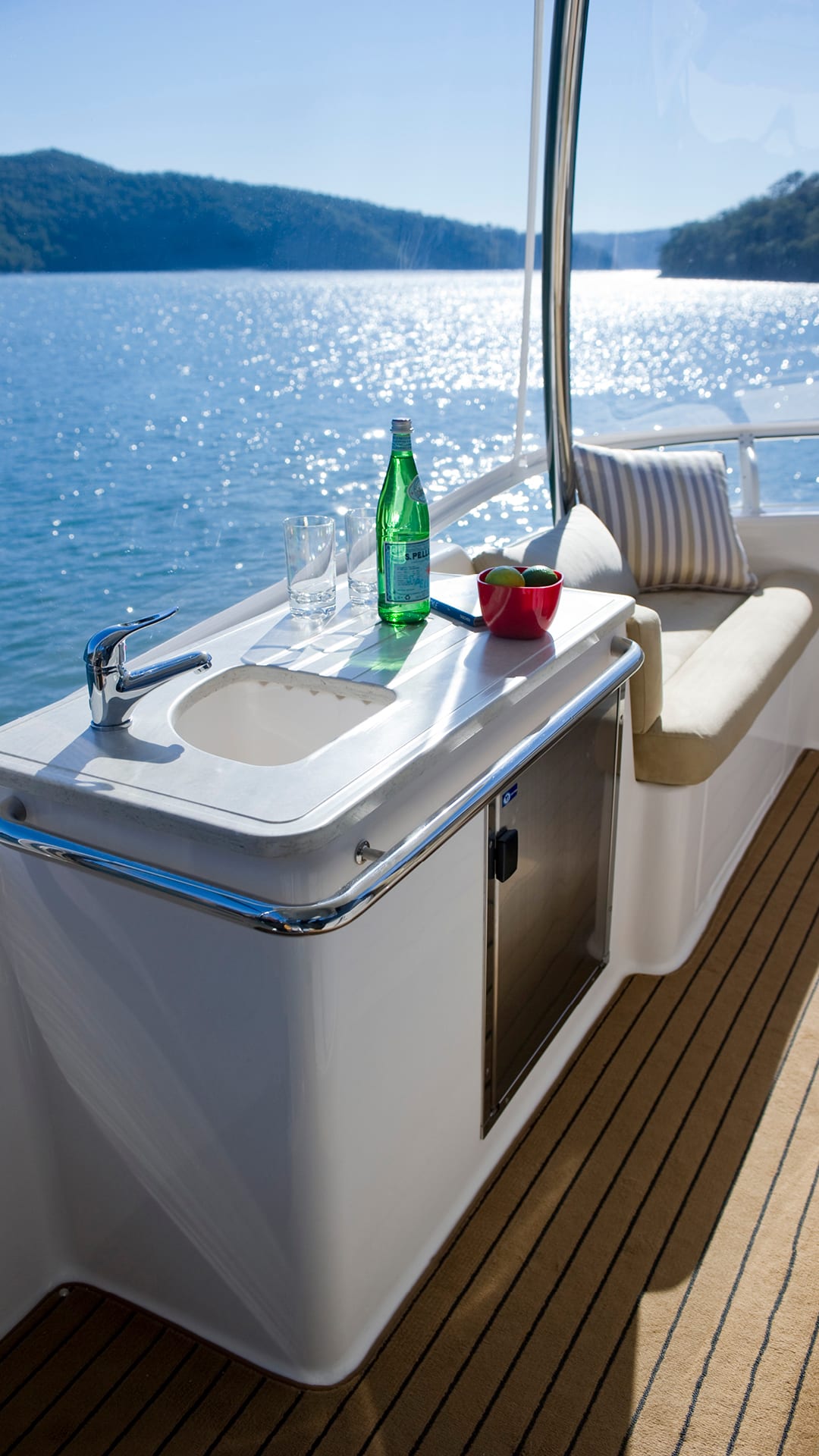 The flybridge wetbar includes a sink and fridge.  Notice the beefy grab handle.

The lower deck features a two-cabin, two-head layout with the master being forward.  The mid stateroom has three berths, with two converting into a larger single berth by sliding them together.

The 43 is designed for spending days above deck and nights below.  She’s a two-stateroom, two-head boat but sleeps 5.  The mid cabin is full beam but lacks the height to make it the master.  The space includes three single berths but includes the advantage of sliding two together to form a queen. 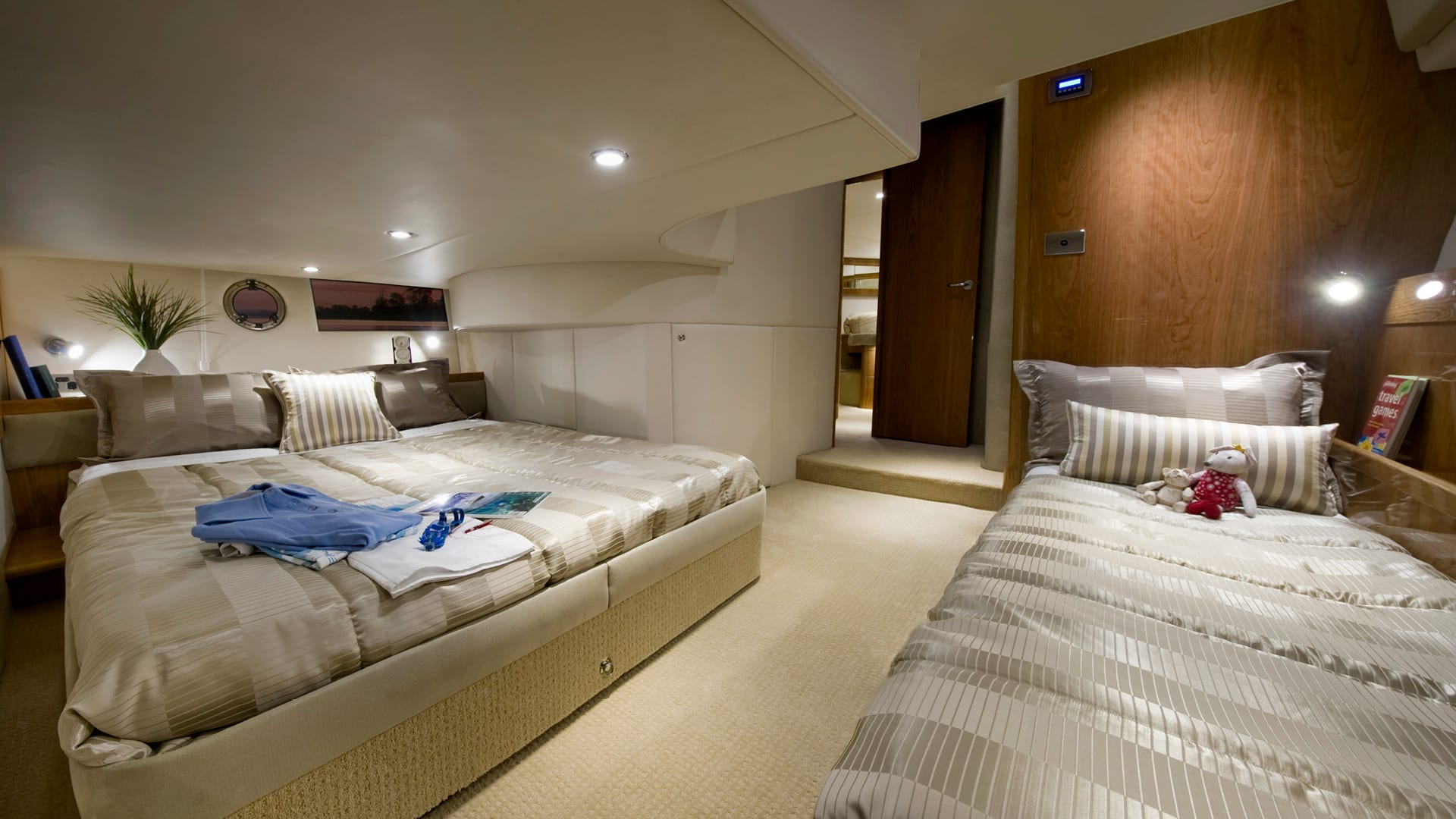 The guest stateroom includes three berths that can be reconfigured to two. 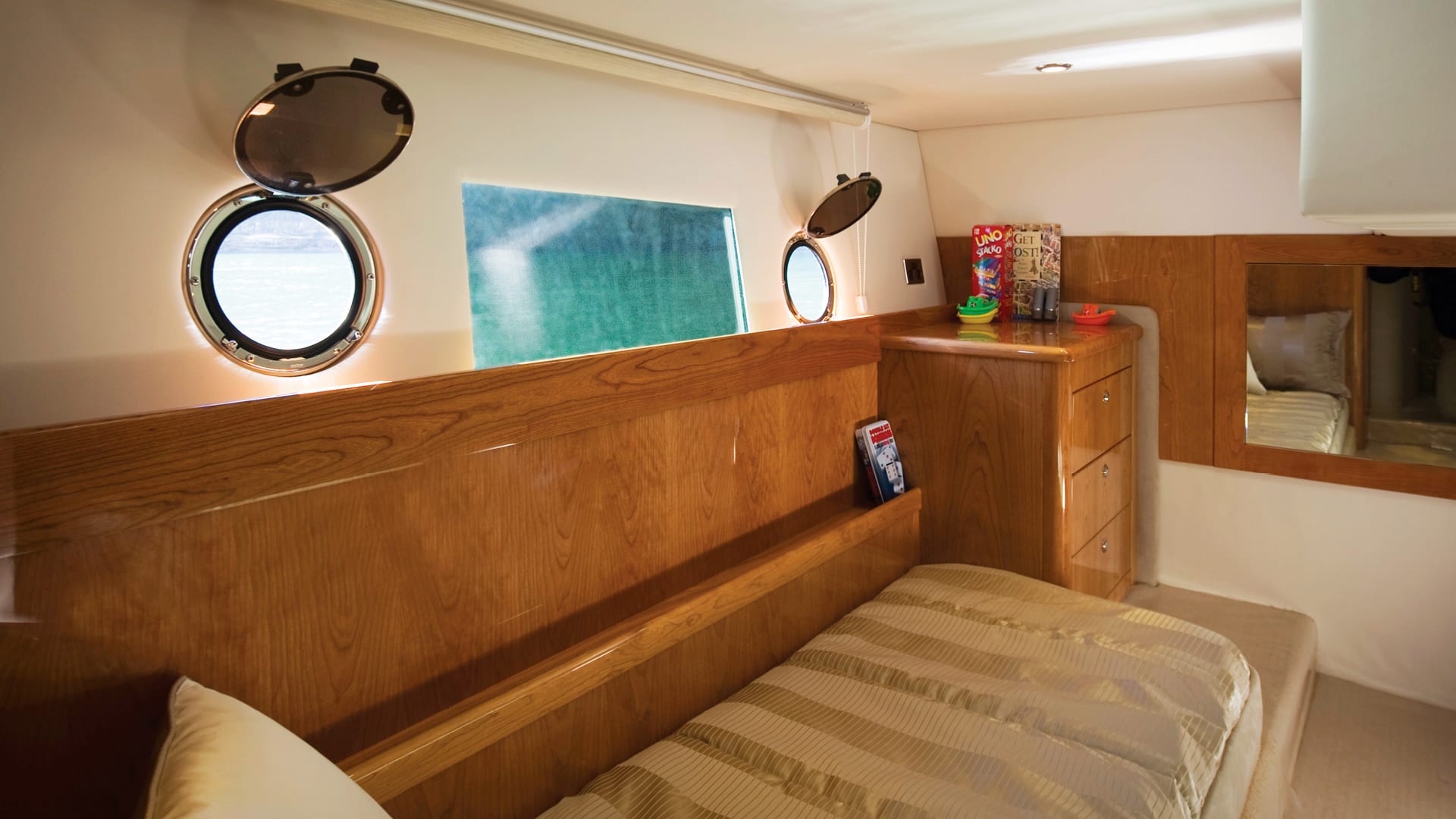 The hullside window is flanked by dual opening portlights for ventilation.  The aft bulkhead is mirrored.  Notice the convenient storage shelf.

The head has both a private entrance and a second entrance to the companionway, allowing it to serve double duty as a day head.

The master stateroom is forward and consists of the usual layout of an island berth, with access to both sides with nightstands fully forward to each side. Riviera is no stranger to the correct use of space, and as such, the side bulkhead areas are utilized for storage.  Additionally, there are two hanging lockers and under berth drawers.  A private ensuite is just aft. 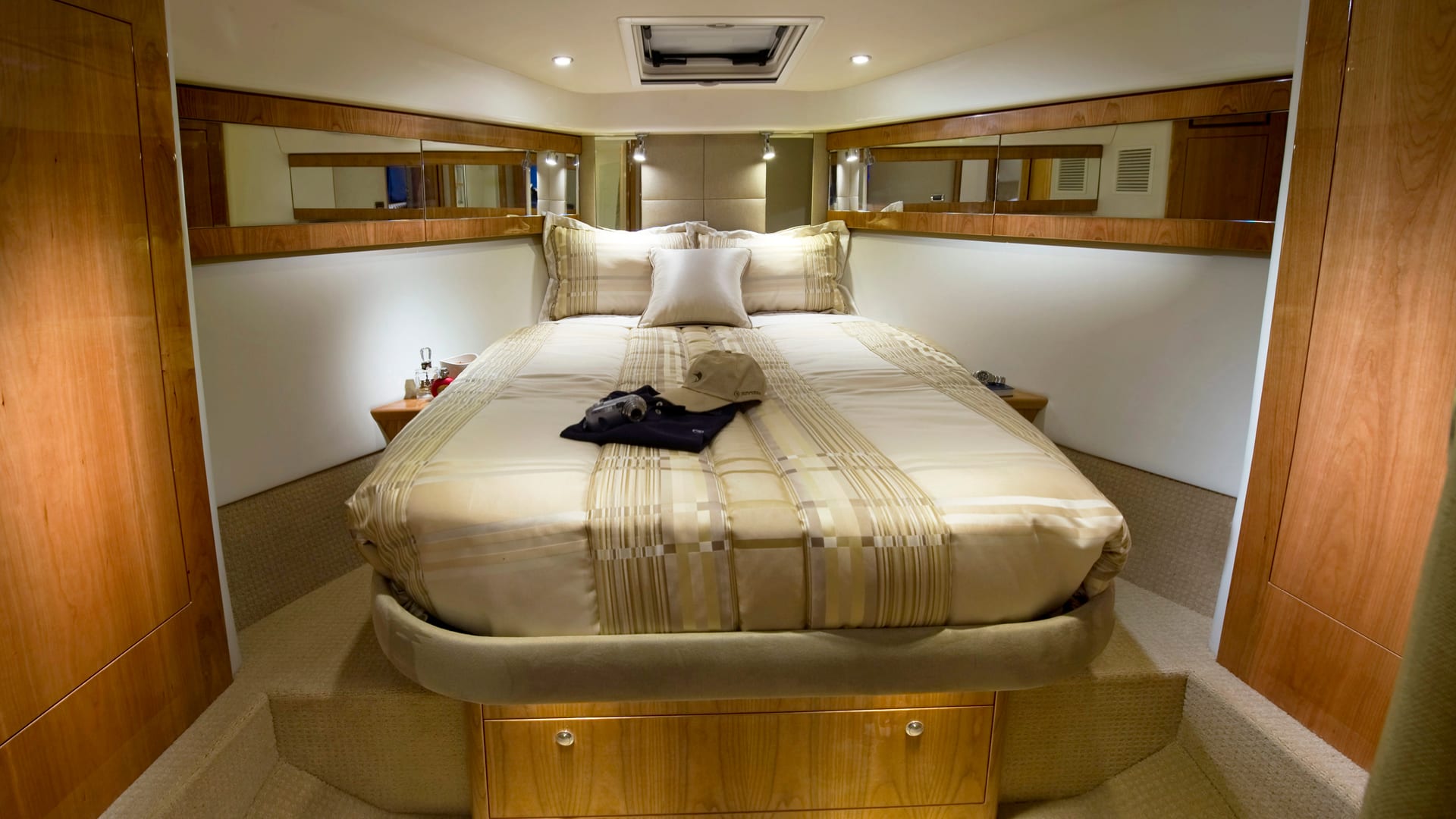 The master is in the bow and well-appointed with gloss cherry wood.  Storage to the sides is an excellent use of space that most builders fail to take advantage of. 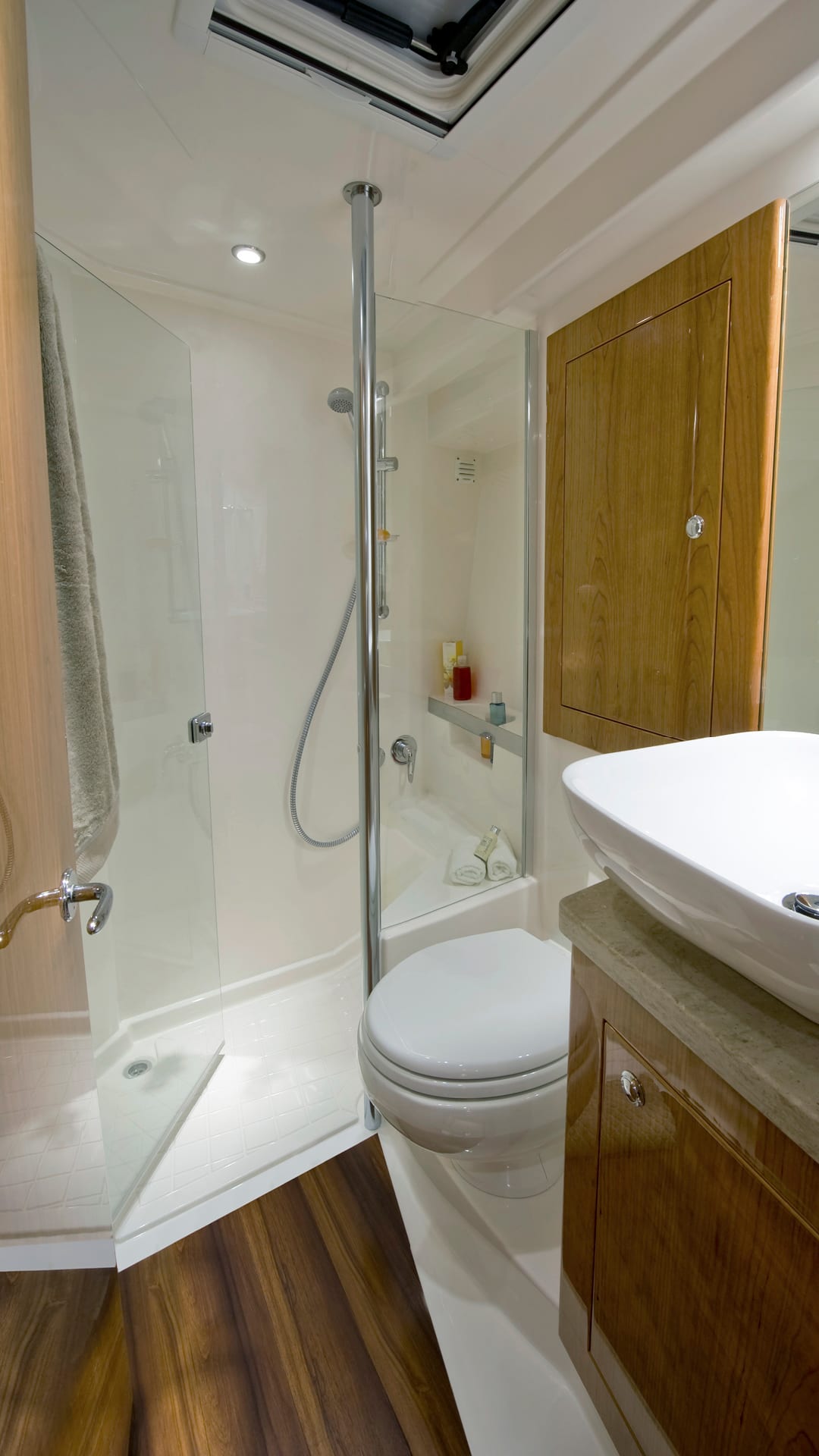 The master ensuite includes a fully-enclosed shower.  Notice the overhead hatch for ventilation.

The Riviera 43 Open Flybridge is a prime example of the tough-as-nails build quality of the brand, while at the same time keeping with a practicality that escapes others.  The interior layout is clever and ergonomic, and it includes many open spaces that make this beautiful yacht a prime candidate for entertaining as well as cruising. 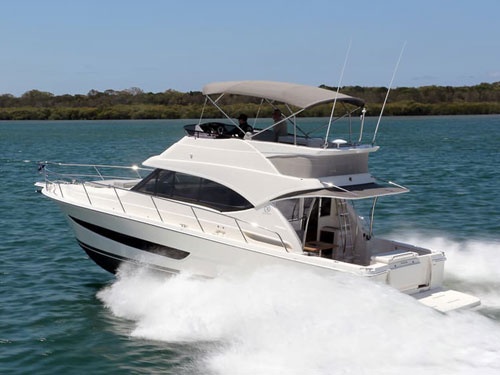 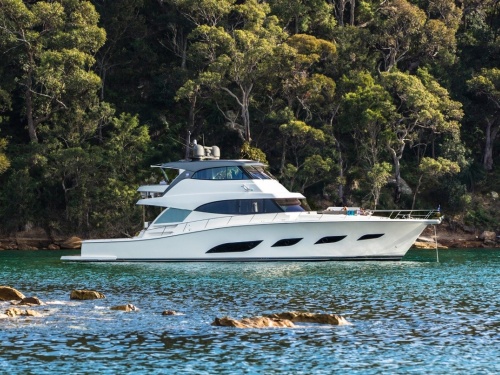 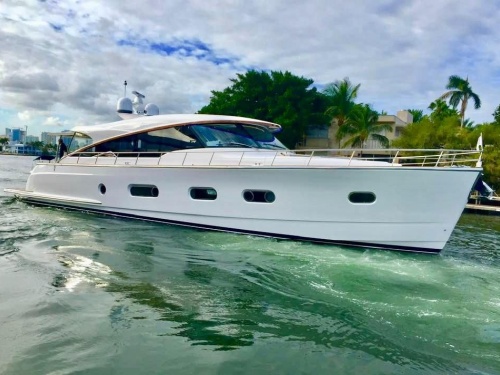