The 58 Coupé made her North American debut at the 2019 Miami Boat Show and she’s shown no signs of slowing down. Sirena actually had no interest in building a Coupe until its customers, largely in the Northeast, requested it. And this is part and parcel of the Sirena mindset… it listens to its customers and responds accordingly. She’s now the smallest in the lineup and is largely a U.S. boat. She's powered by Volvo Penta with CAT as an option.

Her low profile has shown immense popularity with the coastal and inshore cruising set that has to contend with low bridges, while not wanting to compromise on build quality or offshore handling capabilities.  And for that, the Sirena 58 Coupé is well qualified.

The engine room is accessed from the hatch in the aft deck.  Choose from either the Volvo Penta 670s or Caterpillar 650s for base power.  Options include the Volvo 900-hp or CAT 800-hp.  The boat we were on was powered with the Volvo 670s.

Upon entering, my first impression was that the engine room was a lot bigger than it needed to be but that was because this owner didn't stock it with everything that could go in here.  Items such as a second generator, a dive tank compressor, extra air handling system, a fuel polisher, a watermaker, a water filtration system… the list goes on and on. So there's more room than we would normally see in an engine room.  And to be honest, I kind of like it.

There's 5’3” (1.6 m) of overhead clearance and a full 3’10” (1.17 m) between the engines. There’s diamond plating decking all around, including over the Seakeeper 9 gyrostabilizer. There are two fuel tanks, one to each side, so we can either isolate them or connect them with a crossover. The crossover is probably a better idea because you have the 23kW generator that is feeding off of the port tank.  Now an important note with these fuel tanks is that because they are made in-house, customers can easily order another tank to increase the range of the boat.

Both engines are connected to V-drive transmissions. The port engine has an extra alternator that's feeding the demand on the House batteries.  There’s a valve on the starboard engine’s cooling system so when there's hot water going through it, we can use that to heat the hot water in the boat.  That means we don't always have to use the electric hot water heater.

The aft deck social zone starts with a 7’8” (2.34 m) bench behind a solid wood table on a pair of fixed pedestals. A sunpad is just behind surrounded by a stainless-steel rail.  Just ahead, there's an electric grill with an automatic shut-off for when the hatch is closed.  Underneath is an icemaker.  To the opposite side, there’s a single basin stainless-steel sink and underneath that is a cockpit refrigerator. All of this is under the protection of the extended overhead 7’ (2.13 m) off the deck.

We can further increase the shade by bringing out a retractable SureSHADE awning. I like that there are boarding gates to both sides of this aft deck, so it doesn’t matter which side we have the dock on.

In the quarters, heavy-duty rollers are mounted to big stainless-steel chafing gear.  There’s a big bollard just behind and an optional warping winch. The excess line is stored in a compartment just behind and it’s nice to see that the controls for the winch are up high rather than on the deck.  Of course, this is all repeated to the opposite side.

The platform is accessed from stairs to port and starboard.  In the transom, there’s a door that leads to what could be crew quarters, but this owner chose to utilize this space for a laundry room.  It includes a Miele washer and dryer right next to each other at the base of the entry steps.  If we make this the crew quarters, there would be a berth in this location.   There’s a wet head over to the port-hand side.

The bow entertainment zone starts with a forward-facing seat. There’s an option of having a table just ahead of the seat.  Further ahead, there's a triple-wide lounger. The seatbacks lift into the chaise lounge position at two separate heights.  There’s also a large storage compartment forward and to the center. There are pop-up LED lights surrounding the lounging areas, adding to the allure after the sun drops below the horizon.

The hatch next to the couch leads to the master stateroom below.

To the sides of the forward-facing couch are two hatches.  The one to starboard leads directly to the master stateroom, an interesting feature in and of itself.  The one to port is just storage, however, inside is a ladder that attaches to two points to starboard on the windshield brow, giving us access to the overhead so we can do servicing on the overhead antenna array.  Now because the storage for that ladder is to port, I’d like to see the mounting points for the ladder be to port as well.

As we move to the interior, there are two sliding doors that give us an opening of 51” (129.54 cm).  This leads us to the galley, which is located right between the two social zones on the main deck.   The features start over on the starboard side with plenty of Corian counter and open serving space.

There’s a double basin stainless steel sink with covers that have dedicated storage right underneath. There's a Miele four-burner induction cooktop and above is a vent hood that you just pull out to activate. Just below is a convection microwave oven.  Directly across are four refrigerated drawers and these can be ordered in any combination of freezers and refrigerators.

Sirena is well known for providing options and the galley area is a prime example of just how a customer’s muscles can be flexed.  We've seen plans where one will bring the aft counter way out and then add a drop-down window to create a serving area.  Another plan reverses both sides of the galley.

Moving into the salon, it's just a step up that reduces the ceiling height to 6’6” (1.98 m), so “reduces” is a very subjective word. There’s outstanding visibility all the way around through large windows and of course the huge forward windshields.  There are manual blinds, but electric blinds are an available option. Seating starts with a U-shaped settee over on the port-hand side wrapping around an expandable pedestal table.

Directly across is opposing L-shaped seating.  There’s storage underneath the seating, but Sirena doesn’t make you lift the cushions and instead outfits the sofas with drawers.  A cabinet lies just ahead that houses the entertainment system and there is a wide variety of components offered, all connected to the 50” (127.00 cm) flatscreen on an electric lift at the top of the cabinet.   Because this is a coupe version and not the flybridge, we also have skylights that open and we can slide shades across.

The helm is port-side mounted and it starts with two large displays on the upper panel.  Air conditioning and heating vents are on the sides and I like seeing that.  The digital controls are over on the left of the console. There’s a Garmin autopilot and a ZipWake controller.  The compass is right in line with the wheel.

Just behind the compass are the emergency stops and I'd like to see them in a more remote location. The ignitions are also right in front of the wheel. A Volvo Penta display is over on the right side.  Further to the right are all the electrical switches and nestled somewhere among them is the horn.  I’d always like to see that stand out so it’s more easily and quickly accessible.

Now here's one note about the steering wheel on our test boat. It’s mounted to a tilt base and that makes it protrude a bit more from the console and reduce space between the helm and the seat.  I don’t feel the tilt wheel is necessary but it is owner requested.  Standard is a flush mount to a fixed base that takes up much less space, so no points are taken for that.

The helm seat is not so much double-wide but more of a seat and a half wide at 41” (104.14 cm).   There's a manually opening window to the side and that means one less thing to go wrong years down the road.

Now let’s head below. In the case of our test boat, we had the optional three-cabin layout.  The companionway is to the starboard side of the helm station and it has been given a redesign for this model year.  Previous versions just seemed a little steep and narrow, but that is certainly not the case here. Instead, there’s a distinct comfort level when negotiating these stairs.  They lead us through a door to a balcony overlooking the master stateroom.

There’s a set of stairs immediately to starboard that lead right up to the bow.   From this elevated vantage point, we have a good view of the windows to both sides with opening portlights.  There’s plenty of storage going all the way around the stateroom.  There’s a chest of drawers up forward with shelf space on top.  There’s also a 43” (109.22 cm) TV that's recessed into the forward bulkhead.  The 74” x 60” (187.96 cm x 152.4 cm) island berth is center-mounted on the keel with nightstands to both sides. Overhead clearance is 6’5” (1.98 m).

The VIP stateroom is to starboard and it has a berth that measures 62” x 75” (157.48 cm x 190.50 cm) up against the starboard bulkhead.  Overhead height is the standard 6’5” (1.98 m) that we’re seeing throughout the yacht.  There's a hullside window with a manually operating shade — or electrical is available as an option.

There’s storage just behind, underneath the berth and in a hanging locker with a mirror on a swivel behind the door.  The private ensuite has a walk-in shower, a vessel sink, more Corian counters and an opening portlight.

Now for the guest stateroom, this one has twin berths and plenty of options are available. We can put a filler cushion in the middle, we can get an option to slide the berths together or have a queen size berth as we saw in the previous stateroom.  This one also has a hullside window and a wet head just in front.

This boat has a comfortable layout and not having a flybridge opens up a world of possibilities for cruising.  In its current layout, it doesn't have the desired 19’ (5.79 m) great loop air draft because of the antenna array on top. But if you request a reconfiguring of that to a collapsible version, then this can easily be turned into a great loop boat. It just makes for another attractive cruising possibility to an already attractive coastal cruising boat.  And “coastal” is a loose interpretation as she has a Category A offshore rating, which covers largely self-sufficient boats designed for extended voyages with winds of over Beaufort Force 8 (40 knots) and significant wave heights above 13’ (3.96 m) but excluding abnormal conditions such as hurricanes.  So, there’s that. 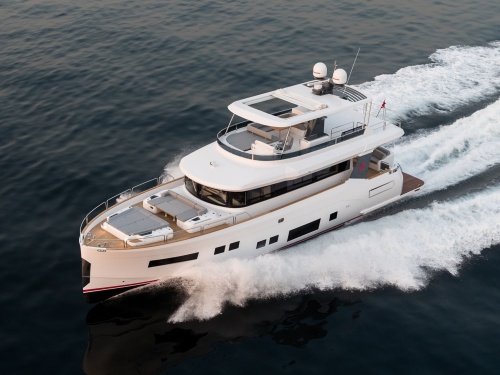 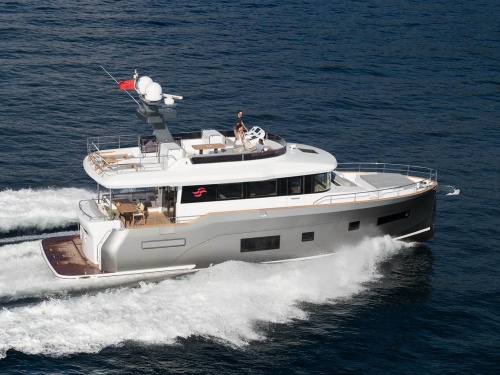 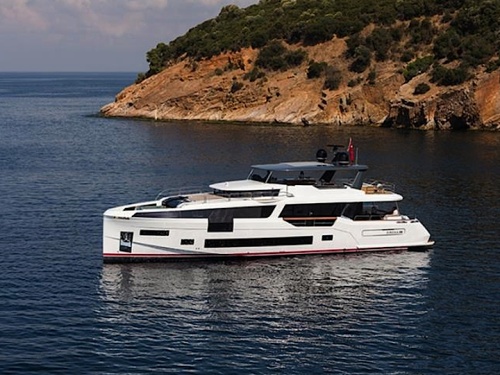 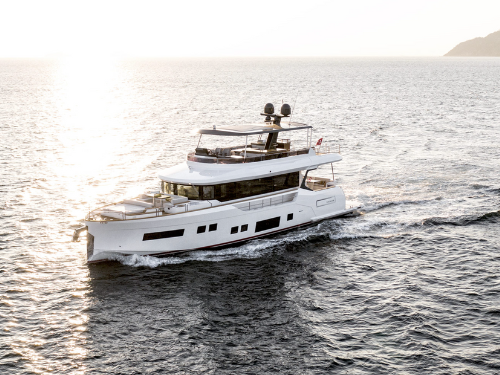