Tiara made waves at the recent Fort Lauderdale boat show with its introduction of the 4500 Sovran, a replacement for the company's star performer, the 4300 Sovran. But the 4500 isn't just a stretched 4300 – it has a different hull, a different deck, a modified arrangement plan, a new hardtop design and lots of small improvements on the earlier model, many inspired by input from Tiara owners. "We didn't just add a couple of feet and call it a new boat," said company president David Slikkers. "It's a completely different boat." Since the 4300 Sovran became Tiara's strongest seller in a shorter time than any previous model, it took courage for the company to retire it in favor of the 4500. Did they do the right thing, or should Tiara have kept the 4300 Sovran around for a while longer

The 4500 Sovran's arrangement plan is similar to the 4300's, but with one important change: The new layout will let dealers or buyers add a washer/dryer in the salon; there's a locker for it built into every boat. The 4300 required special cabinetry for the washer/dryer, which meant reducing the size of the dinette – a factory job only.

When first working up the 4500, Slikkers and his team sifted through databases to find critiques of the 4300 Sovran, looked at warranty records to locate any recurring problems and consulted with owners to find out how they used their boats and to elicit suggestions on how to improve them. Many of these consultations took place at Owners' Rendezvous, attended by company management and employees as well as Tiara owners. "We try to make the next generation better than the earlier one," said Slikkers. "The 4300 Sovran was a gold performer for us; in the 4500, we wanted to go for platinum."

The 4500 adds a lounge on the foredeck, two large skylights over the salon and an optional bench seat that folds out of the "garage" aft.

Dealer feedback also played a part. Some dealers said they'd lost sales to other brands because buyers wanted a washer/dryer, optional on the 4300 Sovran but requiring a change in salon cabinetry that had to be done when the boat was built. Other dealers lost sales because their stock boats had the washer/dryer option, which robbed space from the dinette. By modifying the accommodations, and having more boat length to work with, Tiara's design team included a large locker in each 4500 Sovran, big enough for a washer/dryer. Dealers can add the units at the time of sale, and owners who discover it's nice to have clean clothes while cruising can do the same at any time. 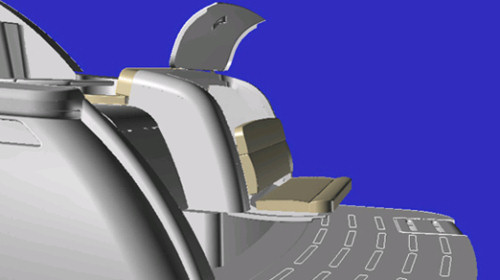 You can never have too much stowage: While the 4300 Sovran had a large garage in the transom, the one aboard the 4500 has 215% more volume. The optional aft-facing bench seat is a good place to sit and watch the kids play in the water. The 66"-deep platform is big enough for a RIB or PWC, and can be accessorized with a hydraulic lift to make launch and recovery simple.

Fun Under the Sunroof

One popular feature of Tiara's 5800 Sovran was a sunroof in the hardtop. It was a very expensive addition to the bigger boat, said Slikkers, but less so in the 4500 where it's now standard. A sunroof admits lots of natural light into the deckhouse, but even more now comes in through a larger windshield and side windows – 504 sq. in. more glass than in the 4300, said Slikkers, thanks to eliminating the center panel and reducing the size of the pillars; that also improves visibility for the helmsman. 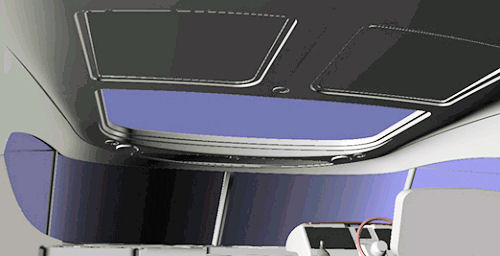 A redesigned and extended hardtop in the 4500 Sovran allows for a large sunroof, a popular feature of Tiara's largest boat, the 5800. It's standard on the 4500. 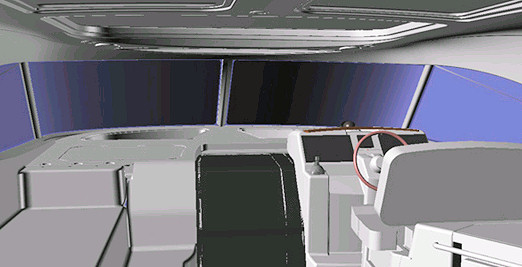 While the sunroof lets in light from above, restyling the 4500's windshield to eliminate the center panel and reduce the thickness of the mullions makes for improved visibility. There's more than 500 sq. in. of extra glass vs. the 4300. The helm is wider, too, with a double bench seat, and can fit more electronics. "Customers can't have enough electronics," said company president Slikkers.

Along with IPS drives, the 4500 Sovran takes advantage of Volvo Penta's IPS Joystick Plus, which makes close-quarters maneuvering intuitive rather than stressful; Volvo's electronic engine controls and steering; and their digital engine monitoring system, with vital signs fed to a 7" color display at the helm. (About the only thing at the helm not linked to a computer is the Ritchie SuperSport compass.)
An Onan 11.5-kW genset provides power when the shore cord is unplugged; we'd add an inverter for brewing coffee, watching TV and other low-amperage chores – with three separate battery banks, including five house batteries, there should be enough juice without starting the genset. 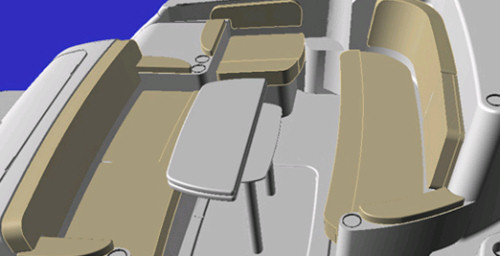 The lower cockpit has ample seating, and the fiberglass table is 60% bigger than aboard the 4300. A hatch provides everyday engine access; the cockpit floor lifts for serious mechanical work. An electric grill is optional here.

It's hard to go far wrong by buying a Tiara, and from what we can see the 4500 Sovran should be no exception. But don't take our word for it: Listen to the market -- the 4300 from which the 4500 derived was a very strong seller, and the new boat looks even better. It's enough bigger than the earlier boat to allow for significant improvements in layout, both above and belowdecks; the redesigned hardtop, sunroof, windshield, helm, garage and platform are all attractive features. We think Tiara will find itself with another winner; at press time, only two weeks after the boat's introduction, three had already been sold. 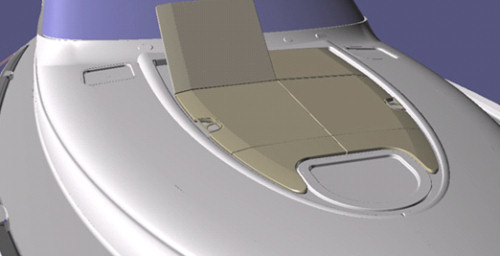 What's a boat like the 4500 Sovran without a sun pad on the foredeck? Adjustable backs convert it to an erstaz chaise lounge. There will be skylights on both sides of the pad, and a transparent hatch ahead of it. 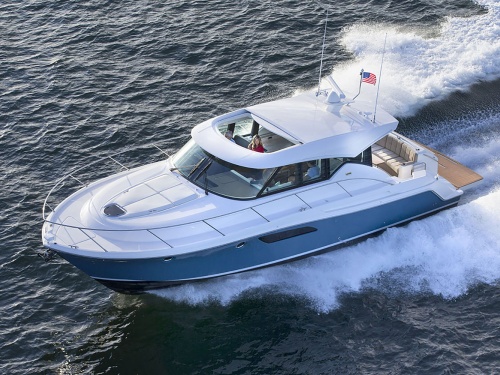 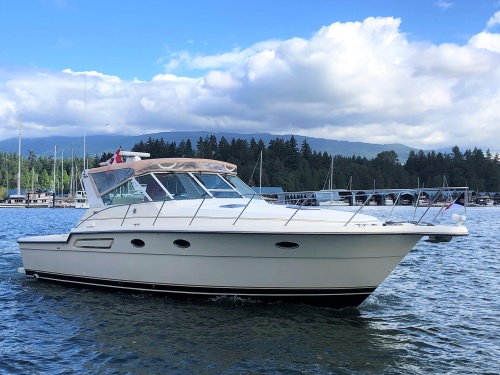 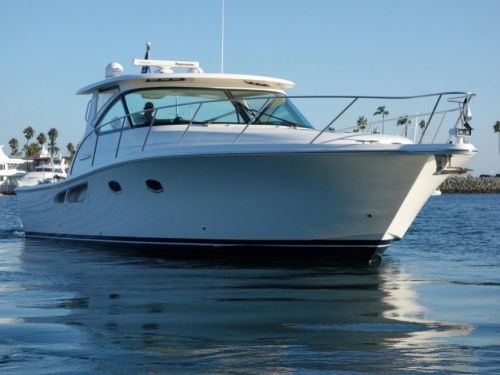 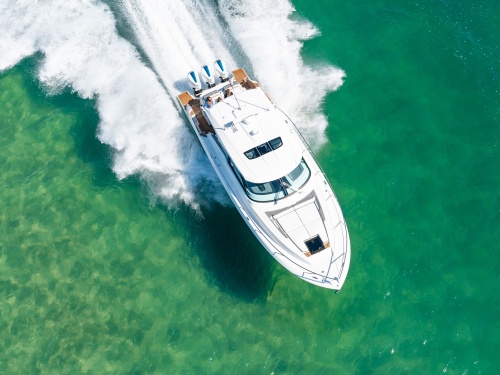