The new Yamaha 252SD is the builder's latest launch that pushed the boundaries of what a 25-foot boat can be. There are improvements in every area... comfort, technology, handling, fit-and-finish to create what may be the ultimate Yamaha bowrider. 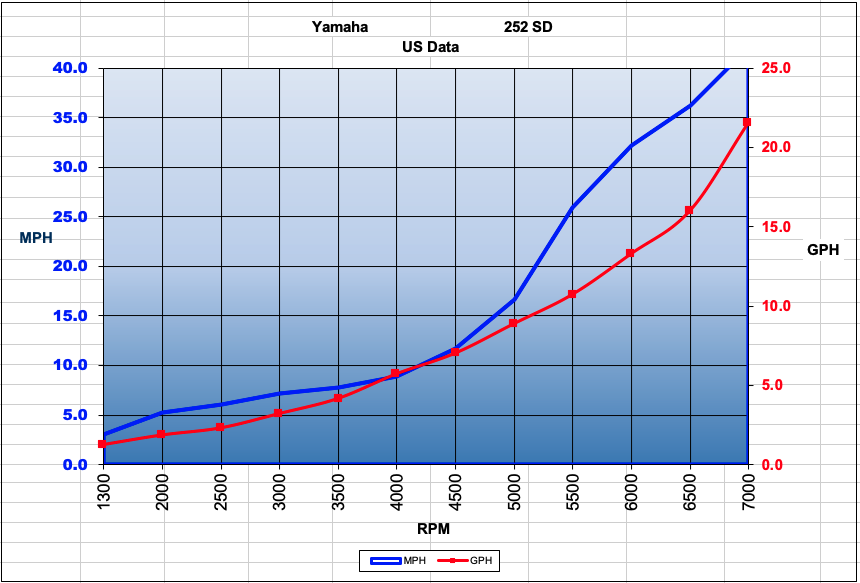 The new Yamaha 252SD is the builder's latest launch that pushed the boundaries of what a 25-foot boat can be.  There are improvements in every area... comfort, technology, handling, fit and finish to create what may be the ultimate Yamaha bowrider.

Not only is this boat exciting and versatile, but it also adds a boatload of technical improvements – most notably in the form of the Floating Connext Touchscreen.  This screen has several features, such as fuel level, battery voltage, bilge pump, blower activation, water depth and time that are permanently docked regardless of what screen is selected.  At the top are seven icons to select alternative screens.

Home – will always return to the main screen.  This will show the stereo control to one side and water temp to the other, when in float mode (engines not running).  Start the engines and the display reverts to showing the two tachometers with gear indications at the bottom, and boat speed in between the two.

Map – switches the screen to a GPS-based moving map.  We can scroll in or out on this map and even revert it to a full screen, which will still be inside the permanently docked icons discussed earlier.

Cruise – This page gives us the ability to dial in target speed and acceleration curves for watersports.

Music – gives us controls over the source of our tunes and the ability to control the various levels for volume and tone.

Switching – The boat icon allows us to control the tower courtesy lights, the water pump for the stern shower, helm lights, interior courtesy lights with the dimming capability and the forward dock lights.

System – Finally, there’s the system controls that provide access to the main menu to set the language, current time, Units (MPH, knots, etc…) as well as the boat’s wellness, which means intervals between various maintenance requirements.

Because this boat is now “fly-by-wire” it allows Yamaha to add some convenience features.  First is a push-button start for both engines.  In the lower right corner of the Connext screen is an icon showing the throttles.  That’s a regular dual-throttle mode.  Touch it and it reverts to a single-lever mode that allows for controlling both engines with one lever.  Of course, the engine RPM’s will be synchronized in this mode, but with dual lever, as long as the levers are close to each other, the engine will still self-synchronize.  Now touch that icon one more time and it reverts to DRiVE technology, and this is a game-changer that we’ll discuss in a moment.  Lastly, there’s Cruise and No Wake modes that allow for holding speed at the touch of a button, and further being able to adjust those speeds incrementally with up-down buttons.

DRiVE Technology allows for controllability at the dock by using dual paddles at the backside of the steering wheel.  The right paddle is for forward (go right ahead) and the left is for reverse.  Both are progressive in that squeezing them more adds more throttle, but never more than docking speed.

So in this manner, we can be standing at the helm, with one hand on the wheel, and dock the boat effortlessly just by turning the wheel and activating one paddle or the other.  It’s a huge deal and so much more comfortable than having to sit and manipulate the usual engine controls to try and get that docking down right.

Yamaha has always done an exceptional job with its stern gathering areas, but with the 252SD it’s taken it to a higher plane of functionality.  There are still the two levels, as usual, but now the lower level includes a padded backrest for times when we’re sitting directly on the platform with feet dangling in the water.  This adds the first of several additional comfort features.

The upper level, really an extension of the cockpit seating, is now more of an actual seat that includes sliding seatbacks with storage access under the seatbacks.  Being that they’re sliding now means the seats can be utilized as just an aft-facing seat or even a chaise lounge.  Finally, not only is there a side mount for a cockpit pedestal table, there are two pedestal mounts just under the rubrail at the transom.  These will accommodate custom-made units that can serve as underwater seats one way, and when flipped upside down, revert to tables over the water.  This is a huge deal and remarkably innovative.  Of course, Yamaha also includes the freshwater shower, stereo remote and speakers at this popular location.

Even though this boat still has the typical 8’6” (2.59 m) beam, it’s carried much further to the outside creating more space than we’re used to in a typical 25’ (7.62 m) boat.  We measured 37” (93.98 cm) between the opposing seats, as well as a cockpit depth of 37” (93.98 cm).  The two seats consist of L-shaped lounges with high bolsters serving as backrests.  The starboard seat also functions as an aft-facing seat with an additional backrest at the forward end, up against the refreshment center.  At the walkthrough to the transom seating, we can add a filler cushion to create full wraparound seating from one side to the other.  We can add still more seating by swinging the helm and observer’s seats around to join the crowd. Both of those seats are thickly padded with a protruding headrest and flip-down armrests.

It’s hard not to appreciate the fit-and-finish in this cockpit.  There are multiple tones of upholstery, contrast bead-welting and heavy stitching.  The upholstery is heavy duty so it's able to withstand the rigors of the marine industry.  To the bulwarks, there's a grab handle, a little storage area with a net, speakers and beverage holders.  All this is repeated to the opposite side and there’s even a subwoofer to the port side. And of course, all the decking throughout is non-skid rubberized Marine Mat.

Walkthrough to the Bow

Between the consoles, there’s plenty of storage.  There’s a door to the port side of the helm console plus another hatch in the deck leading to storage there.   However, the real star of the storage show has to be in the port console accessed from a side door that opens into the walkthrough.  Inside there's utility storage.  We also have dedicated storage for the cockpit table, and we can configure this as a head by putting an aftermarket Porta-Potti in, thanks to the 4’ (1.92 m) of headroom.

The bow area also has its share of upgrades.  Yamaha carries the beam well forward so there’s more room to the interior.  There is the usual configuration of dual lounge seats, one to both sides, much as we see in nearly every bowrider.  However, not one's to stop there, Yamaha also brings versatility.  Remove one, or both, forward cushions to add regular chair-style seating to the mix.  Add filler cushions to create a large sunpad or move those same cushions back to create three across forward-facing seats.

All of this versatility also comes with the usual wrap-around bolsters, a built-in, self-draining cooler fully forward and a rubberized non-skid matting on both a step and the hatch over the anchor locker to facilitate bow in boarding and even beach reboarding. 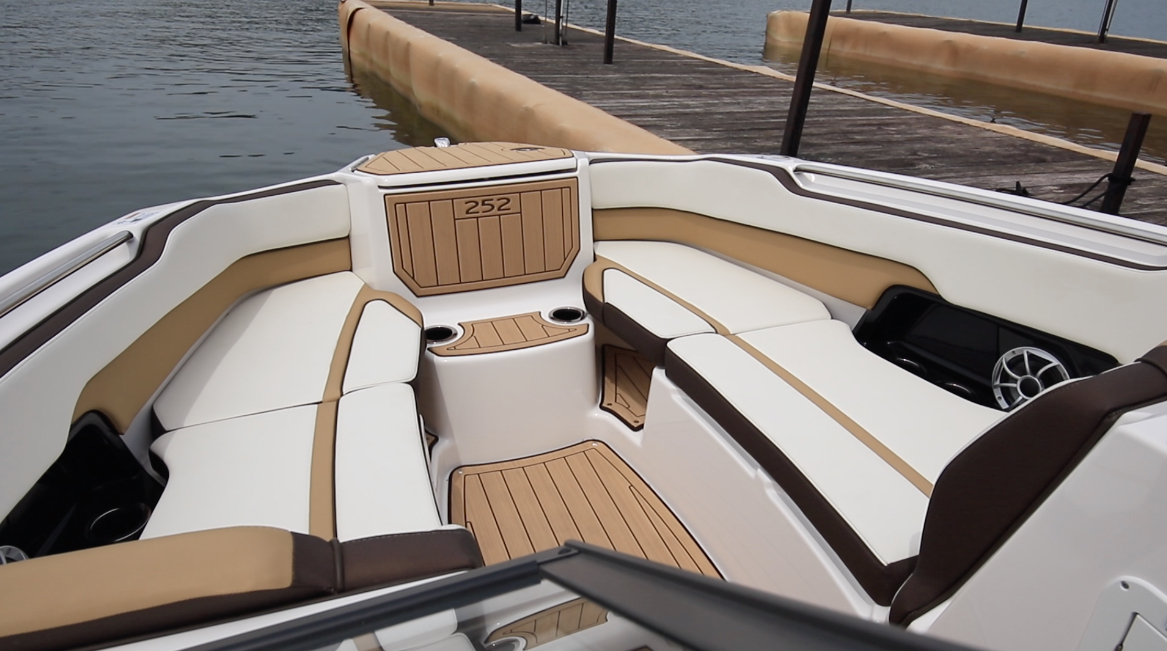 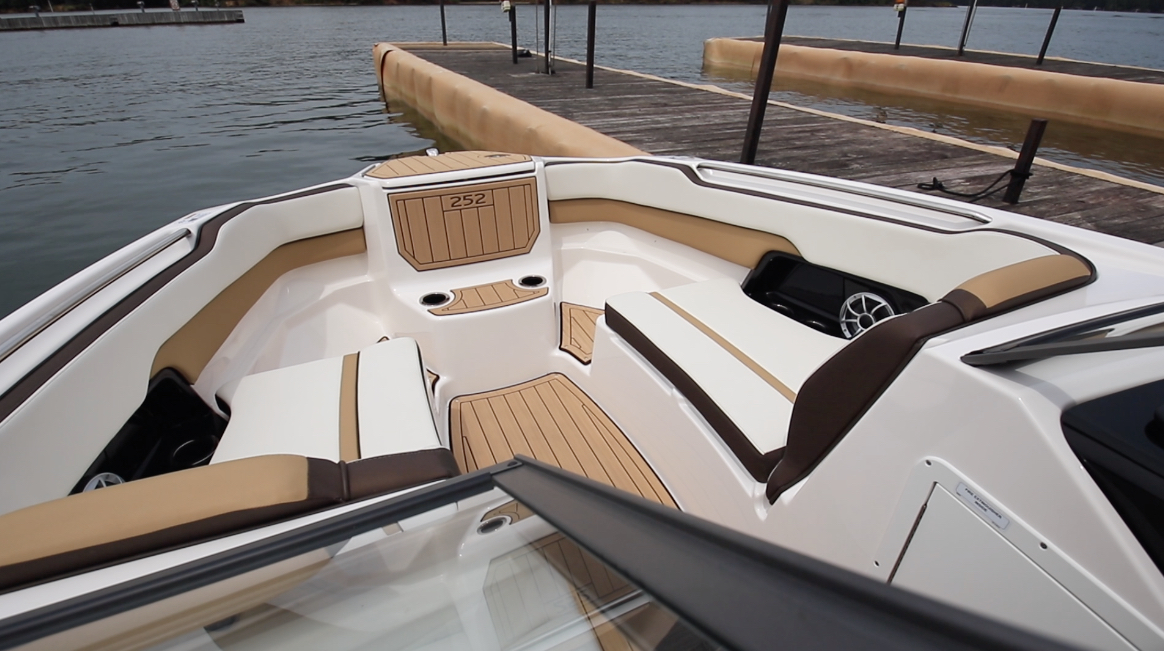 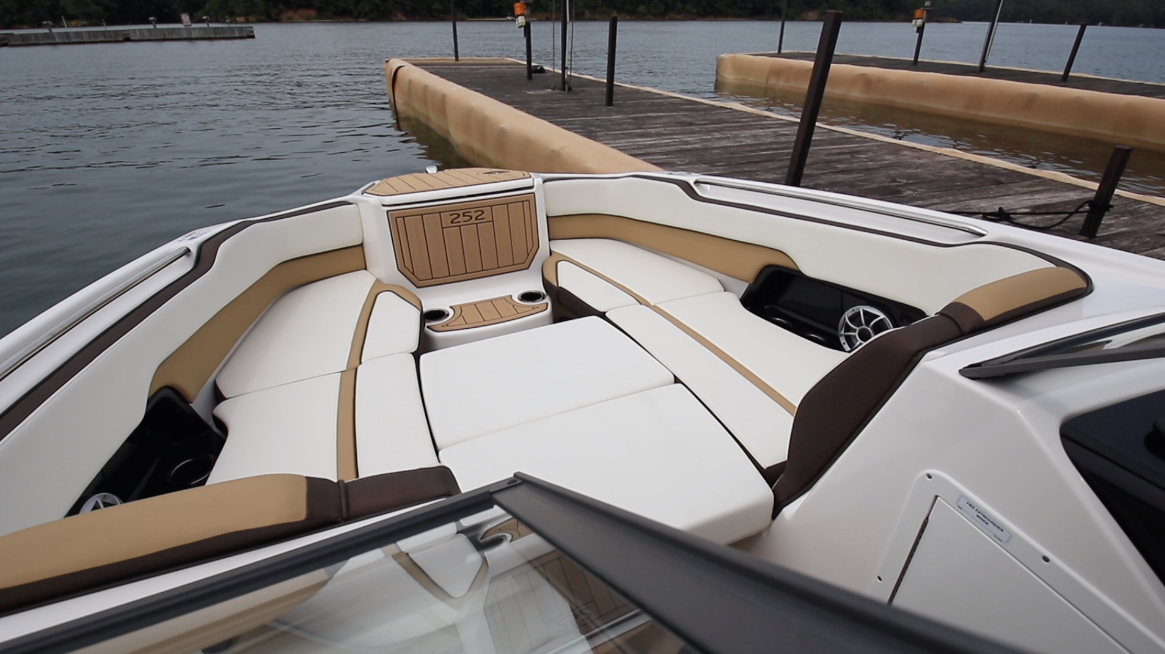 As expected with any Yamaha boat, the 252SD has exciting handling characteristics. With the twin 1.8L high output engines, she’s quick out of the hole.  We reached planing speed in an average of 2 seconds flat, continued through 20 mph in 5.5 seconds and right on through 30 mph in 8.5 seconds.  She has ¾ turn steering that has most jet boats spinning out in the turn, but Yamaha has eliminated that and kept the boat in control throughout.  I noticed no chine walk or adverse slide to the turns and only a little bit of speed bleeding off.  I also noticed that even without the single lever feature activated, if the throttles are anywhere near close to each other, the engines will automatically sync to each other.

It’s clear that Yamaha was trying to raise the bar on just what a 25’ boat could be, and they seem to have hit the nail on the head.  Combine the roominess, upscale features, versatility, technology with jet power safety and it’s simply a winning combination.