The Evinrude E-TEC series of engines has been living up to its claims pretty much across the board during a series of tests we recently conducted on some of its engines. That, coupled with the fact that Evinrude is backing the engines with a 3-yr warranty and a required dealer maintenance schedule of once every 3 years or 300 hours, makes it plain to see that this makes for an attractive series of engines. Today, we test the E-TEC 300 H.P. that is bolted onto a Dusky 233 to see how it performs.

The Evinrude E-TEC 300 H.P is available in several different types: DCX, DCZ, DPX, DPZ and DSL. The information on this page represents the DCX type unless specified. 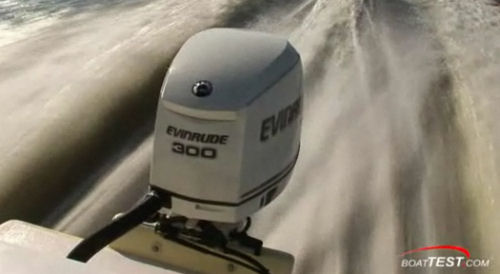 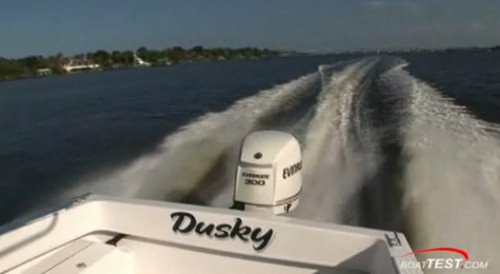 We tested the Evinrude 300 on a hot summer day with high humidity.
Comparison to Other Engines
In looking over our tests of other center console boats in class powered by other engine brands, we didn’t find any powered by a single 300-hp. Next, we checked the performance testing of the outboard companies looking for a 300-hp single engine CC in boats with a dry weight of about 3700 lbs., which is what our Dusky weighed. Bingo! One of the makers of a 4-stroke 300-hp engine had done their own test on a sistership of the same Dusky 233 we tested.
A Comparison Caveat
This is potentially one of the most apples-to-apples comparisons we have seen, but we hasten to add that these kinds of tests, even when done with BoatTEST.com's captains at different places, at different times on the same model are never apples-to-apples. There are always differences in temperatures, weight of the two people aboard, liquid levels, wind and water conditions, humidity, prop geometry or material, testing gear and tester technique. Further, no two sisterships are exactly the same weight, and even if it was exactly the same boat, we tested the Dusky 18 months after the 4-stroke engine maker so the boat was likely heavier.
In this case the recorded date shows that it was 14-degrees F hotter when we tested the Evinrude and the boat was probably 350 lbs. (159 kgs.) heavier because we had a full load of fuel aboard, not a half load as in the 4-stroke test.
With that caveat, the performance numbers are breathtakingly similar. To us, this was an important affirmation of Evinrude's claim to be as fuel-efficient as 4-stroke engines. If you remember the old 2-stroke engines of yesteryear and how they guzzled gas, then you will be amazed at what the new Evinrude's E-TEC engines consume. 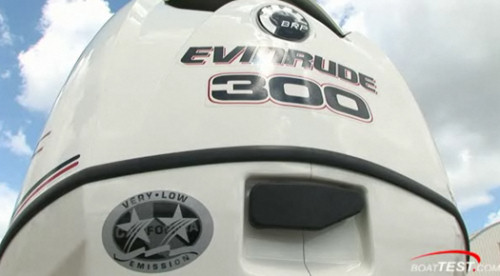 The Evinrude 300 meets the toughest emission standards all over the world.
The E-TEC 300 Features
The skeg is large enough, starting at 5 3/4” and increasing to 12” as it rises above the prop. The lower unit itself is an SLE (Straight Leading Edge) and it has its water intakes on the forward section of the lower unit, forward of the prop. A second water intake is mounted to either side of the casing and each measures 1 ½”. They’re removable for easy cleaning.
Also mounted to the forward end of the lower unit was pickup for the speedometer. This means no drilling into your boat for mounting a pitot. Great feature. The propeller on our test boat was a 15 1/4x19”P Rebel. The anti-ventilation plate measures 21 1/2”x6” and included a trim tab hanging underneath to counter torque.
I love the engine-mounted trim switch, and even though that’s not a new or even unique feature, this one has a limiting switch that prevents the cowling from coming into contact with a splash-well or high transom. Plus, it’s adjustable by the end user with no tools. And while the engine is tilted up, you can lower the attached trailer bracket to take the load off the hydraulics while trailering.
The main electrical harness is conveniently located, as you can see in the video, and for once, someone got the brilliant idea to mount a spare fuse right at the harness connection. Thank you, Evinrude.

Anglers like the low cost of Evinrude's scheduled dealer maintenance, which is the bugaboo of many 4-stroke engines.
Telling Tales
Not only is there a thru-hub exhaust, but there are dual ports above the waterline as well. The upper is for engine exhaust, and the lower for cooling water. That lower cooling water port is also fitted with a tell-tale stream that you can direct as you desire with nothing more than a spark plug wrench. Removing the fitting entirely allows you to attach a garden hose for flushing the engine out with fresh water.
Stopping Engine Knock
Getting a dose of bad gas can start an engine knock that could cause serious damage. Evinrude E-TEC 300 H.P. comes with a knock sensor that detects a bad burn and corrects it, saving the engine from damage, the company says.
We’ve all had senders that have had to be replaced now and then. I couldn’t help but notice that on the 300, the thermostats were easily accessible, and believe it or not, they’re replaceable with just a spark plug wrench.
Speaking of self-servicing items, the fuel filter deserves a mention. First it’s mounted with the screw attachment facing up. Some have these facing down for some reason, and when you unscrew them, they dump fuel all over the place. These keep everything nice and tidy. The fuel filter is also a water separator, and if water does get into the system, a signal alerts you to the need for a filter change, and likely a fuel change as well. 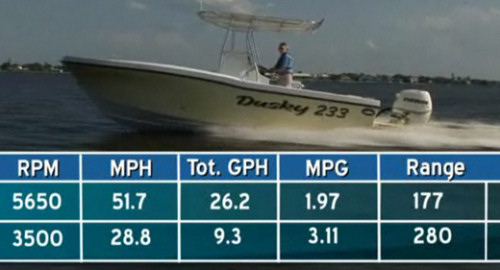 WOT numbers on the top row and best cruise reading are on the bottom row.
Fly-by-Wire
The E-TEC 300 H.P. is an easy-to-operate engine. It uses a system Evinrude calls I-CON™. A digital throttle control sends a signal to an electronic servo that is in turn connected to the shift and throttle linkages. The result is a gentle control for both shift and speed. This is a great feature as you won’t experience cable stretch or linkage problems affecting your control travel.
The downside is if you’re one of those people like me who tend to rest your hand on the control at all times, then each bounce of the boat will result in a speed change. Small price to pay and I just moved my hand from the top of the engine control to the base, then wrapped my fingers around the shaft of the engine control and problem solved.
The digital world that this engine lives in also comes into play with the I-Command™ gauges. They’re multi-function and totally customizable. We had three separate ones that were showing dual bits of info that we set them up for. One had engine temp and voltage, another showed RPM and GPH, and another showed MPH and MPG. I like that these are customizable as different operators like to have displays. 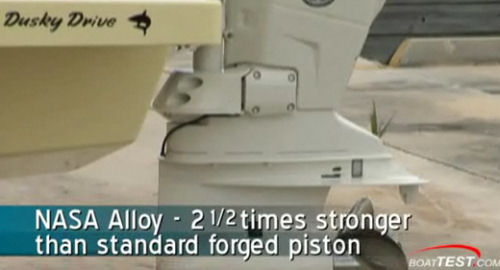 In many respects the Evinrude 300-hp E-TEC engine is the highest-technology outboard engine on the market.
Goodbye Corrosion…
...Or at least “see ya later.” While nothing can eliminate corrosion in metal parts when combined with warm salt water, Evinrude has gotten on the stick to slow it to a crawl so that it takes a longer time to show itself, according to company engineers. (We have yet to test this aspect of the Evinrude engines, but we plan to.)
The company's engineers tell us that their anti-corrosion approach is a four- part process.

In addition, sacrificial anodes (zincs) are added and their job is specifically to deteriorate before any other metal components.
All said, I have to say I was impressed with the E-TEC 300 H.P. Not only was it a great performer, but it has the features that separate one engine from the others in critical areas where the rubber meets the road. 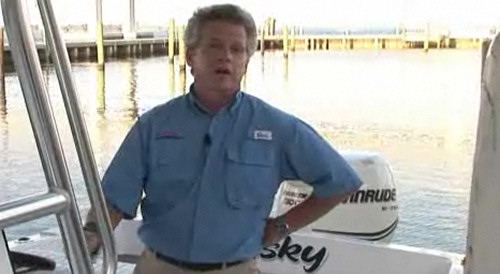 Capt. Steve is never at a loss for something to say and he was impressed with the fuel consumption numbers of the Evinrude E-TEC 300-hp.
Recommendation
When buying an outboard motor there are six things that seem to us that everyone should want –

Because the Evinrude E-TEC has 250 fewer parts than a conventional 4-stroke outboard there are a lot fewer things to go wrong which goes a long way towards addressing the issues of reliability and longevity.
The performance numbers we achieved, along with the comparisons speak for themselves when it comes to fuel efficiency and power. When we looked at tests of other boats with the two other major brands of 4-stroke 300-hp outboard engines on 23' boats that were several hundred pounds lighter and several hundred pounds heavier we found performance numbers that roughly tracked with what we got with our Brand-X comparison discussed above. The Evinrude-powered Dusky 233 was faster and more fuel efficient at WOT in all cases. At best cruise the 'Rude Dusky was a bit slower but more fuel-efficient in these rough comparisons.
Our take away from our test and test-comparison research is that E-TEC engineering, at least in the 300, has put to rest any concerns one might have about Evinrude's 2-stroke fuel efficiency.
And as stated previously, Evinrude’s required dealer maintenance is once every 3 years or 300 hours, and the maintenance itself is basic. The company offers a three-year warranty.
Taken together, all of that is a strong recommendation in itself.