ZF recently announced the introduction of a pod drive system with docking joystick control for single-engine applications up to 480-hp. This new product could be revolutionary for the marine industry because it will bring the ease of joystick docking to tens of thousands of boaters worldwide who prefer single engine propulsion. The new ZF system incorporates both its proven pod drives with its own bow thruster and black box software to control the system.

Capt. Steve Says…
I have to admit, this one had me curious. I’ve tested my share of pod driven boats and they’ve never failed to impress. But this was much different. This was the first single pod application… ever! How could I not get excited about this boat test?
Before you get too excited, keep your checkbook in the drawer. This boat is not for sale. It’s a proof of concept demonstrator developed by ZF Marine and being shown as an OEM product. In other words, it was manufactured to entice builders to offer the drive system in their boats, and then sell them to you. But if the line of people all aching to take their turn behind the wheel at the Miami Boat Show is any indication, you won’t have long to wait. But to all those people in line… sorry, me first.

With just a single pod driving our 14,000 lbs. (6,350 kg.) test boat, we reached a top speed of 37.7 mph and cruise economy of 2.14 mpg at 32.1 mph. That spells prodigious range.
The Platform
The boat that ZF chose to demonstrate the pod drive system was the SeaVee 340i. The standard single engine configuration is 440-hp diesel -- the ZF demonstrator was powered with the 480-hp CMD 5.9 QSB. Connected to that engine is a 4.25” (10.7 cm) diameter 7.8’ (2.4 m) long carbon fiber jackshaft driving the 2800 series ZF pod.
The Pod
With a weight of only 573 lbs. (260 kgs) this pod can handle engines up to 500-hp. And you can easily picture the amount of weight that is taken off the stern of the boat now that outboards are out of the picture. The Cummins is mounted inside the center console which gives this boat better weight distribution.
One of the nicest design features of the ZF pod is that there is no “port” or “starboard” model. They are built to be both, and one of the ways that they exercise their ambidexterity is by giving the cooling water intake the ability to mount on the left or right side. Same with the exhaust dump, mount it facing left, right, or straight down for thru-hull exhausts. 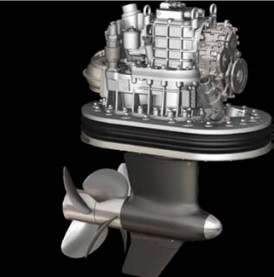 At the right of the unit you can see the flange where the jackshaft connects to the pod. Just below and in front is the raw water inlet that can be moved to the other side as desired.
Having the cooling water enter through the pod is a great feature for the builders, as it means there’s one fewer thru-hull that needs to be cut into the bottom of the boat. There’s a grate that will filter large items like plastic bags and leaves from entering the intake, but there’s still a need for a secondary water strainer inside the boat.
The main components of the pod are easy to identify. A large electric motor at the front is the steering motor. A wire coming out of that is clearly the control input wire. At the top you can easily identify the trolling sensors and valves. Right between the exhaust outlet and the raw water outlet is the steering sensor, which is mounted on a slotted base so that it can be swiveled roughly 30 degrees from one side to another. 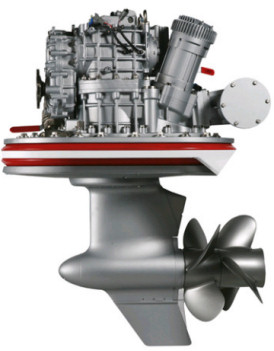 At the upper part of the pod there are two red handles, one at the left for the raw water intake, and at the right for the cooling water outlet. The large circular piece at extreme right is the exhaust dump that can be mounted in four different directions. The cylindrical piece mounted at 45-degrees is the steering motor. Above the skeg there are three set screws holding the sacrificial skeg in place. There are three more on the other side.
The steering sensor is wired into the programmable steering control unit. The reason for the steering being programmable is fairly straightforward. You don’t want the full range of movement, which would be required when coming into the dock, when you’re at WOT or even at cruise speed. When you’re maneuvering around the dock the pod will have 180 degrees of movement. At slow cruise, or no wake mode, the range of motion is decreased to 50 degrees. Finally at normal cruise, the range of motion is reduced even further to 16 -20 degrees.
The programmable aspect of the pod also allows plug and play functionality -- thus adding control stations simply requires another wire run to a control hub. Our test boat was equipped with a control station both at the helm and in the tower. 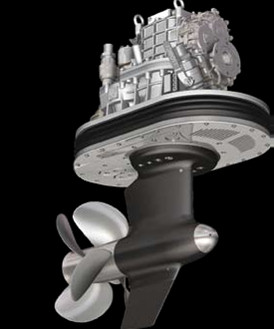 On the underside you can clearly see the water intake grates. The sacrificial skeg is made of composite material and easily replaced. The entire lower unit is made from cast aluminum for light weight.
Unique Thruster
Of course the joystick functionality that you will enjoy does not come just from having the single pod, but works in conjunction with the ZF bow thruster, a 6-kW model 185. My first reaction to seeing that it was an electric thruster was “uh oh”. Anyone who has been around thrusters long enough knows that electric thrusters tend to overheat and shut down when you need them most. This is one feature that I intended to fully put to the test. 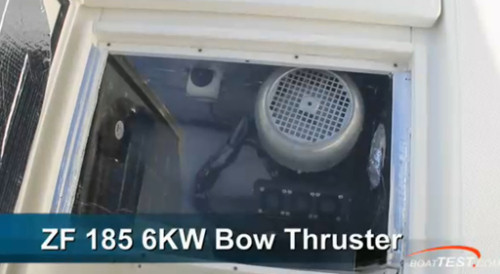 The ZF electric bow thruster is one of the most impressive thrusters we have ever tested. It has three internal cooling fans and is rated for 30 minutes of continuous use. We have never seen an electrical thruster with such capability.
As it turned out, this ZF thruster, with its three top-mounted cooling fans, is rated for 30 minutes of continuous operation so my worries were unfounded. Further, unlike some other thrusters that work at two speeds only, zero or 100%, this one’s output is proportional to the amount that you’re pushing against the joystick.
Move the joystick a little, the thruster pushes the bow a little. Move the joystick a lot and the power to the thruster increases. It also kicks in its proportional programming to hold heading as you maneuver the boat sideways. And, the thruster works as a solo act just by pushing against the un-activated joystick. In this manner you get thruster functionality just as you normally would, although with proportional power output. 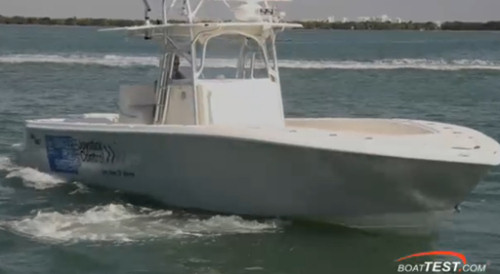 ZF's joystick software vectors the single pod in concert with the single bow thruster to maneuver the boat just as if at had twin pods or drives.
Performance
Now let’s go over the numbers. Our SeaVee 340i had an empty weight of 12,500 lbs (5,670 kg). Add the weight of our 5.9 CMD, the pod, five people, fuel, and test gear and our test weight came in at 14,715 lbs (6,675 kg). Top speed was reached at 3470 rpm and 37.7 mph.
Our fuel burn was 24.2 gph which translates to 1.56 mpg, or 491 miles. Best cruise was found to be at 3000 rpm and 32.1 mph. More interesting however, was the fuel burn associated with this engine and pod relationship. At cruise speed we were burning only 15 gph, and getting 2.14 mpg for range of 675 statute miles. This is remarkable range for a cc with 350 gallon of fuel, and a 10% reserve.
Of course being that this was a turbocharged diesel we weren’t experiencing breakneck performance in the acceleration department. Time to plane was 11.5 seconds, time to 20 mph was 12.6 seconds and we accelerated through 30 mph in 18.2 seconds. Upon hitting the throttle there was a slow buildup of speed until reaching 2000 rpm, at which point the turbocharger would kick in and the acceleration rate would increase accordingly. 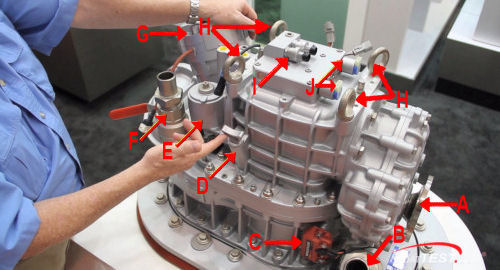 The ZF 2800 pod: A -- Flange for drive shaft connection; B -- Water intake; C -- Mercathode Corrosion Protection; D -- Oil dip stick; E -- Oil filter; F -- Engine exhaust water dump; G -- Steering motor; H -- Lifting rings for installation; I -- Trolling vale sensors; J -- Trolling Valves.
While maneuvering the boat at speed the range of motion limitations to the pod became apparent. High speed turns created a very large turn radius, but backing off the throttle even a little would increase the directional range of the pod, and therefore tighten the turn accordingly.
Handling
Of course the performance only tells part of the story. The main benefit of pods, or in this case pod, is the joystick functionality and the associated increase in maneuverability around the dock. At this point it’s important to note that this application was merely a proof of concept installation and therefore the programming aspect had not been dialed in, nor did ZF intend to on this boat.
That said, I found the thruster and pod to work very nicely in conjunction with one another. It did differ from a dual pod installation in that operation was limited to moving fore and aft, and side to side, not diagonally.
I didn’t find this to be much of a drawback as it is intended for small boats that would really have limited use for diagonal movement. Still, I was able to put the boat exactly where I wanted, and how I wanted it. 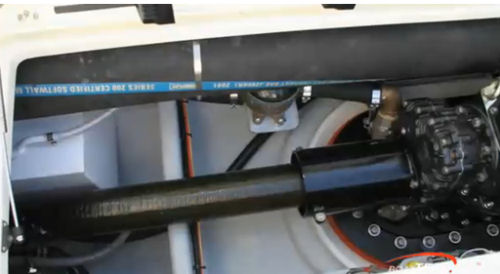 A 7.8' (2.4 m) carbon fiber jackshaft, 4.5" (11.4 cm) in diameter saves lots of weight and is as strong as stainless steel in this application. This configuration better balances weight in the boat.
If anything could be viewed as a downside, it would be that ZF had not dialed in the programming to this particular boat. As a result, one maneuvering quirk that I dealt with was a 3-4 second lag time between moving the joystick and experiencing a reaction from the input. It was easy to work around this, and I only mention it for no other reason than the lag time existed on this prototype. But past experience with ZF’s innovations have shown their ability to program out any design quirks. I have little doubt that once the system enters production it will work flawlessly and instantaneously, as promised.
The fact that we were able to move a 14,000 + lb. boat over 37 mph on a single engine with such economical fuel consumption speaks volumes for the innovation that ZF is now bringing to the small boat market. Pods have certainly found their place in the marine world, and now that we have a cost effective advantage to adding a single pod to small boats, things will only get better, not only for those looking to save money but for those looking to increase their confidence level while operating around the dock with a crowd watching. 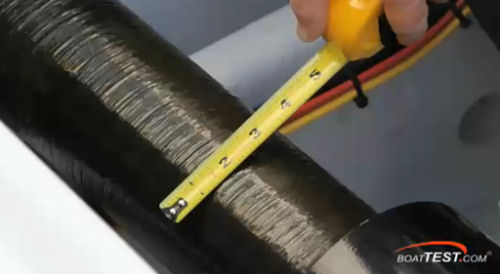 Yep, the carbon fiber jackshaft is 4.5' in diameter. It is remarkably strong and light, and can be easily installed by one person.