Two days before, at Lake X near Orlando, Fla., Mercury Marine invited the boating press to view and experience the prodigious horsepower from this robust block. Six boats measuring from 42’ to 54’ (12.80 m to 16.45 m) were on hand for running by the boating press. Not only was the new outboard engine platform the largest ever built, but it also incorporates a long list of innovations.

The Biggest Outboard Block on the Planet

This outboard has been five years in the making and is designed to propel boats in the 35’ to 55’ (10.66 m to 16.76 m) range. It’s a naturally aspirated, V12 quad-cam, 64-degree V powerhead with dual throttle bodies that creates a package that produces a tremendous amount of torque.

To harness this power, Mercury used a lower unit with twin counter-rotating props that feature a four-blade prop in front and a three-blade prop behind. Mercury has a full range of props up to 18” (45.72 cm) in diameter. Big boats typically have many power-hungry features like gyro stabilizers, air-conditioners and concert-worthy stereos, so the alternator cranks out 150 amps. In comparison, the Mercury 400R produces 70 amps.

Mercury teamed up with German gearmeister ZF to produce a two-speed automatic transmission that uses a higher 2.97:1 gear ratio to help heavy boats get on plane quickly before shifting into second (2.5:1) when the load lessens for better high-speed performance.

The hydraulic, wet-clutch transmission engages without the characteristic outboard-clunk we’ve been accustomed to. This smoothness was especially noticeable when using Mercury’s Joystick Piloting for Outboards or when using features like its Skyhook virtual anchor, which often require lots of shifting to perform their respective functions.

With the advent of joystick docking, it’s now normal to see outboards facing in different directions when performing advanced maneuvers like walking the boat sideways. With a steerable gearcase — that’s totally submerged — no matter what docking maneuver is being performed; onlookers won’t see the Mercury V12 Verados move at all. Not only does this eliminate the challenge of having to mount and pivot a 1,260-lb. (571.52 kg) outboard, but it also allows Mercury to mount these surprisingly slim motors on a 27” (68.58 cm) center, which is only one inch more than is required with virtually all multiple outboard installments.

Usually, with big, long boats, a lot of rpm is needed to make a boat spin or move sideways and quite often a bow thruster is required. During our experience on the six boats available, it also allowed the boats like the twin-engine 42-foot (12.8 m) Sea Ray to be whipped around in turns like an SDX 250. All the boats we operated on Lake X were equipped with automatic trim tabs and Mercury’s Active Trim features, so all the operator had to do was select the desired speed and steer.

All routine maintenance, like checking the oil or automatic transmission fluid, can be performed by opening a hatch on the top of the cowling. Despite its sophistication, the 600-hp V12 Verado doesn’t require any scheduled maintenance for 200 hours.

At the press event, we asked to have the cowling removed and this proved to be a big ask since it required a wrench to perform this task. Because of the sophistication of the engine, maintenance, scheduled and otherwise, should be performed by an authorized dealer.

The second scheduled maintenance is at 1,000 hours or five years, whichever comes first. No maintenance procedure requires the boat to be lifted out of the water. Even procedures like changing the oil can be done with a suction device that uses the dipstick tube. 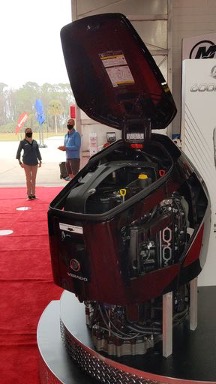 A new, more ergonomically correct, more feature-laden binnacle was also unveiled for the V12 Verado and all other Digital Throttle and Shift (DTS) outboards down to the 175 FourStroke. The top of the control box is free of any obstruction or buttons so owners can lay their hand flat on it for those who like to work the throttle lower down the lever.

This also allows the driver to curl their hand over the top to access the manual engine trim buttons with their fingers. There’s a built-in display screen on the binnacle base’s face to allow the driver to easily scroll through the menu using soft buttons. The green neutral indicator light has been moved from the base of the binnacle — where it could be obstructed by the levers — to the top of the lever’s grip for easy reading.

How Does it Perform?

On the Formula 500 SSC, which was the longest and heaviest boat in our demonstration lineup, the quad V12 Verado outboards pushed the boat on plane in 6.58 seconds with little bowrise. It reached 20 mph in 7.87 seconds and 30 mph in 12.8 seconds with a top speed of 69 mph.

Considering these engines were pushing nearly 24 tons of fiberglass, we consider this excellent performance. These aren’t fire-breathing racing engines, but instead are intended to be reliable, high-torque, economical engines that are civilized to drive, easy to dock and low on maintenance.

Who is it for?

We think Mercury hit the mark by creating an outboard that can handle boats up to the mid-50-foot range, but it also can have single-engine applications in smaller boats, such as a 30-foot long, 10-foot-wide pontoon boat. Engine weight and boat balancing factors will obviously dictate the size of the boat that uses this engine.

The MSRP of the engine is about $77,000, which sounds like a lot until you consider that in most applications it will reduce the number of conventional engines needed by one. In fact, those who are looking to buy boats that need quad Mercury 450R outboards to achieve acceptable performance can instead get 1,800 horsepower with three 600-hp V12 Verado engines for about the same money, we’re told.  Further, the engine's other innovations and attributes are a considerable step up from existing outboard engines on the market.

The announcement of the new V12 600-hp outboard from Mercury Marine answers a lot of questions we have had.  The first was why didn’t Mercury get to work on its own high horsepower engine when a few Mercury engineers left to start Seven Marine in 2010?  And, last year, why did Volvo Penta drop the Seven Marine platform it bought in 2017? Now we know the answers to both of those questions.

Clearly, the two largest engine makers knew years ago that there was about to be a paradigm shift in consumer acceptance of high-horsepower outboard engines on large cruising, fishing and day boats. We expect that trend to continue.

Mercury Marine rejected the concept of taking a GM engine and marinizing it for a lot of reasons, preferring instead to develop its own new engine platform tailor-made for the market. That took a huge investment in both money and time.  But now it has a versatile 7.6 L platform that can be downgraded to 500-hp (which it simultaneously announced with the 600) for commercial applications.  It can also engineer engines that can get even more horsepower out of their new V12 block.

We think this remarkable new engine platform from Mercury Marine opens up many opportunities for both it, boatbuilders and consumers – all of whom see the advantages of ever-larger boats with outboard power.

The charts below were based on tests done by Mercury Marine.

Range data provided below by Mercury Marine is based on 100% fuel capacity. 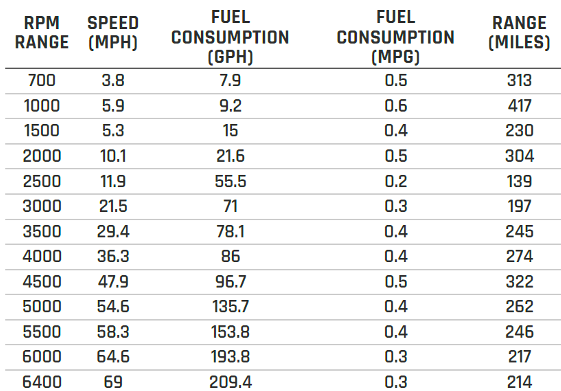 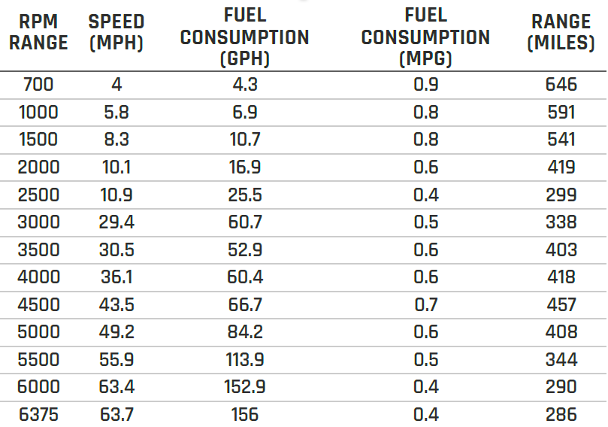 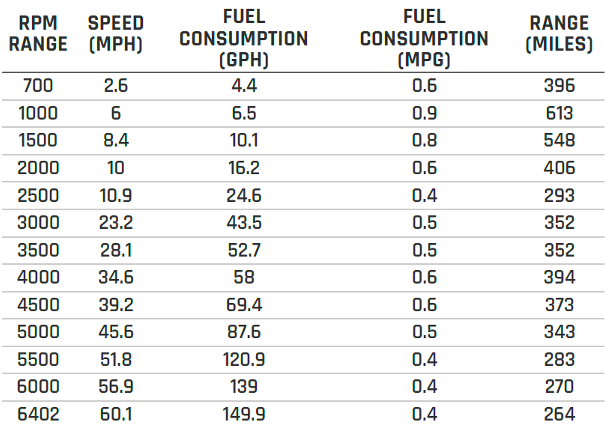 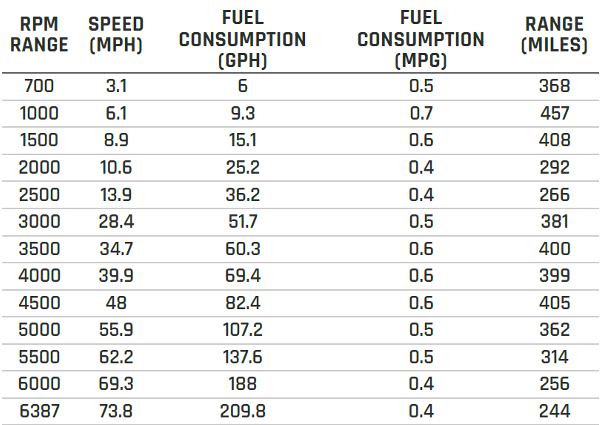 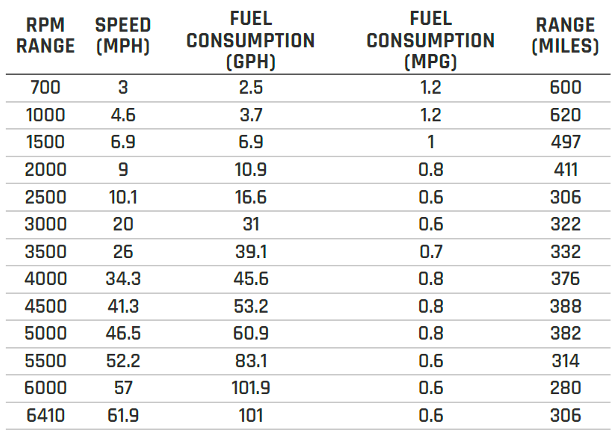 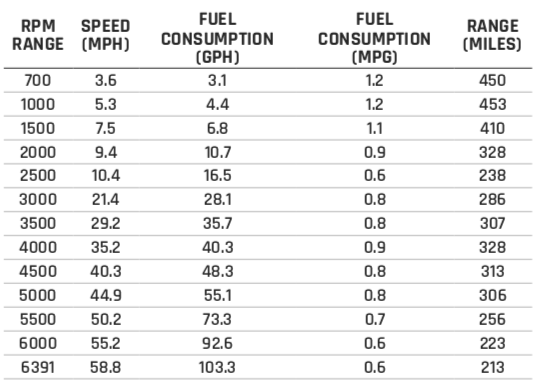