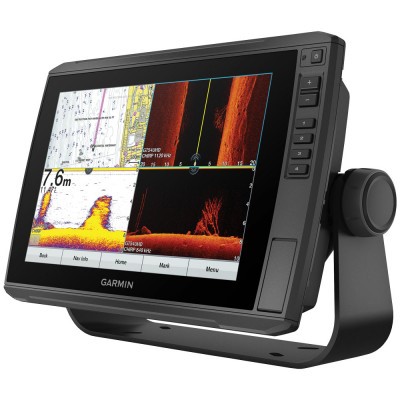 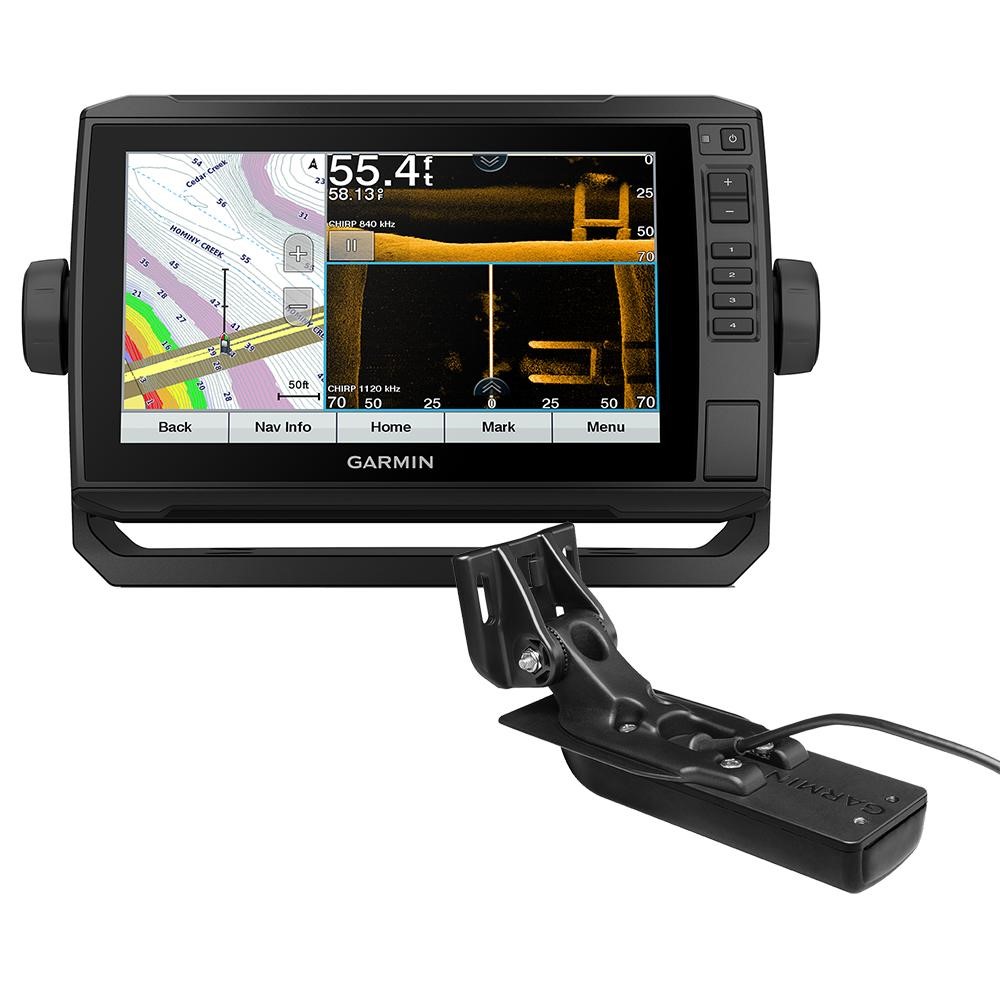 Combining the new ECHOMAP UHD with the right transponder is key to taking advantage of the technology.

The Garmin ECHOMAP UHD Series takes fishing to a new level by allowing us to see below the boat with incredible detail, navigate any water with the optional charts, or even keep station with compatible trolling motors. It can even act as another display for monitoring engine data through a NMEA interface. The screen is easy on the eyes and the picture is clear, even in bright sunlight. Most of all, it will help catch more fish. 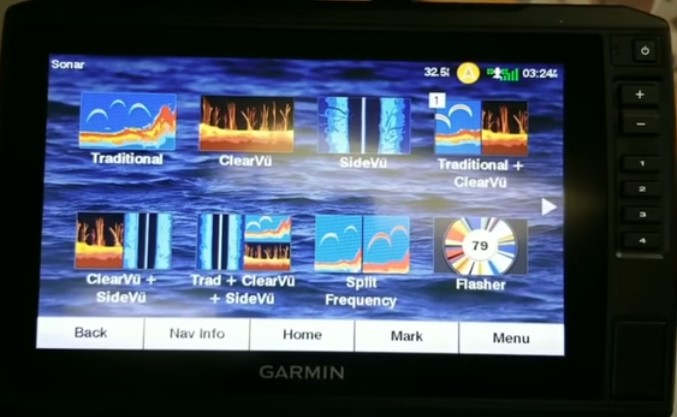 The Echomap UHD has touchscreen capability AND also pushbutton menu controls to the right side to facilitate ease of use.

All sonars send out sound signals or ping at certain frequencies. When the signal bounces off an object and is reflected back it can virtually outline the object - even fish. The low, medium, and high range sound frequencies appropriate to different imaging situations are operator controlled. The operator can also concentrate the beam width and vary the distance scanned. 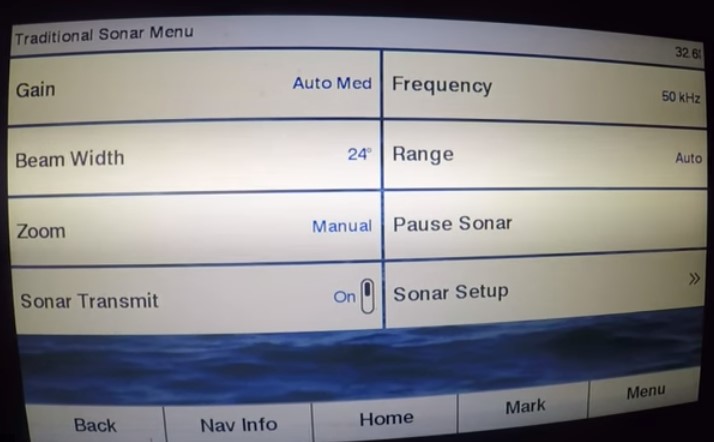 Garmin lets the operator set frequency, range, and beam width to match the depth of the water and speed of the vessel for best resolution.

For instance, low frequency sound is best in deeper water, so one would typically use low frequency, 40 - 60 Kilohertz (KHZ), and a narrow beam for fishing offshore. Conversely, in shallow water, the best imagery is often achieved with high frequency, 150 - 240 KHZ, in a wider beam.  Medium frequencies of 80 -160 KHZ would be appropriate in 10 - several hundred feet of water. 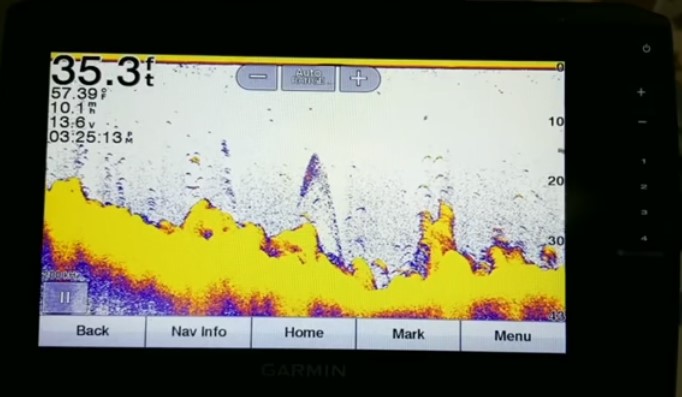 Chirp sonar display shows the yellow contours of the bottom below the boat but also purple shadows above the bottom that indicate fish.

Chirp stands for compressed-high-intensity-rapid-pulse. What Chirp does is allow multiple frequencies within an entire bandwidth (low, medium, or high) to be transmitted and read for better resolution. The unit sends out sound signals across the entire frequency range. This methodology is successful at seeing the bottom and fish below the boat. 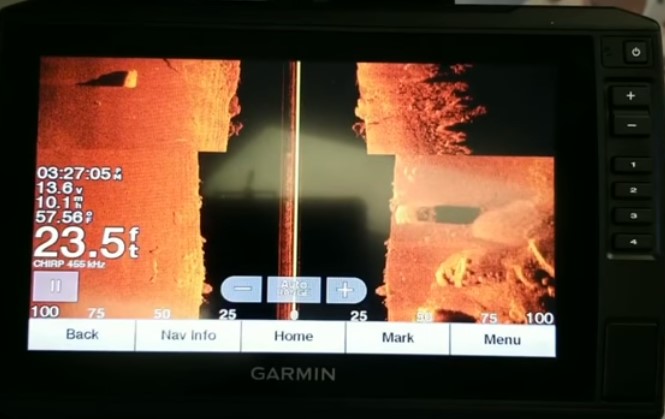 The screen displaying SideVu has distance settings just above the touchscreen menu. In this case it shows 35 to 100 feet to either side of the boat.

In order to see off to the sides, SideVu very high frequency (VHF) sonar was developed. As with Chirp, the operator can set the distance, frequency, and beam angle – but with SideVu sound signals are shot off to the sides of the boat. This technology can show fish but it is more often used to show structure around which fish gather. 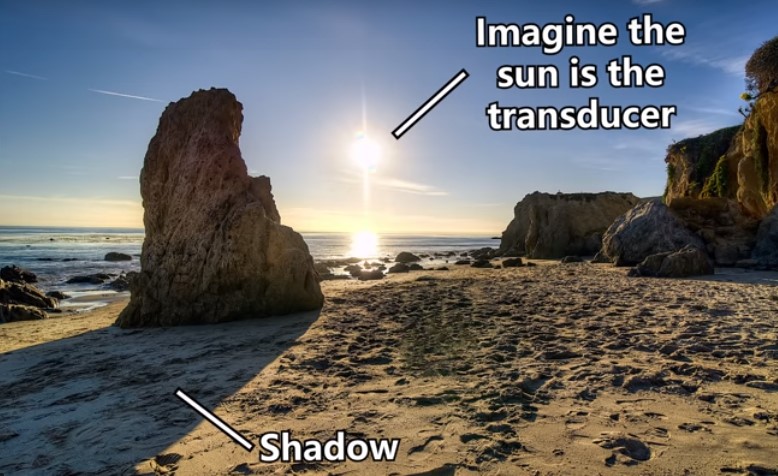 Often times with SideVu shadows are cast behind a rock or object as even sonar can not see through a solid object. The length of the shadow often indicates the height of the object.

ClearVu is also a very high frequency sonar that also shows what is under the boat but it is better at showing structure than fish. With the combination of sonars, anglers are able to see fish and the structures around which they gather. 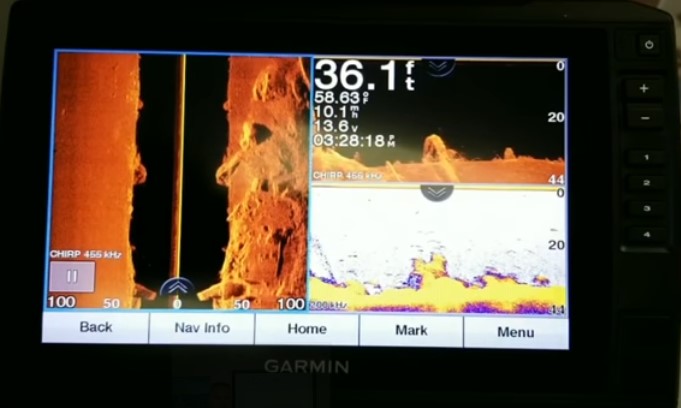 This split screen shows SideVu on the left, with ClearVu, over traditional Chirp on the right. Learning to interpret images from these three different views is an art form in itself.

Selecting the right transducer(s) to connect with the Echomap UHD screen is dependent on the kind of fishing, type of boat, and mounting location for the transducer.

Garmin sells the Echomap with or without the transducer(s) so consulting with your Garmin retailer about the specific locations the equipment will be used in and your boat should determine which transducer(s) to buy.

The Echomap with Chirp, SideVu and ClearVu only come in the 7” and 9” screen sizes designated with the SV label.  Echomap in 6” screen size comes only with ClearVu and traditional Chirp. The 7” screen can come either way - again, check the SV or CV designation.

The 6" Echomap screen, the 63CV, only supports Chirp and ClearVu so buying a SideVu transducer would be a waste of money. If you buy the ClearVu model with a transducer it will come with the compatible GT24 transducer. The seven inch screen is available with either ClearVu (73CV) and/or SideVu (73SV) so again be careful ordering. The nine inch screen (93SV) is a SideVu so it is capable of displaying all three sonar types, but again provided you have the compatible transducer(s).

Your boat’s hull type may also dictate the transducer and mounting options. 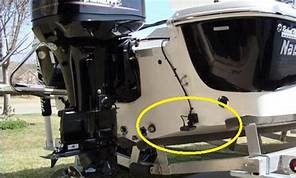 There are many options for mounting transducers; transom mounts are the most popular.

An in-hull transducer sits in the bottom of the boat in a puck and sends its sound signals through the boat’s bottom. For these reasons, in-hull transducers do NOT work on boats with cored bottoms or in metal hulled boats.

For those applications a hole needs to be drilled in the boat’s bottom and a thru-hull transducers is used. Some boats with deep-v hulls need a transducer on each side of the centerline to cover the bottom, or a wedge kit is installed to keep the transducer level with the surface of the water. 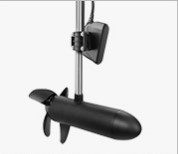 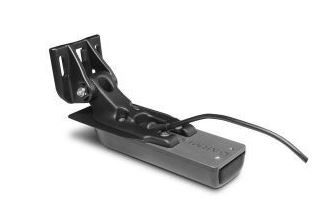 The Garmin GT54 transom mount has Chirp, ClearVu, and SideVu crystals in one transducer unit and produces a “True” down image from the dedicated down sonar crystal.

All UHD units support ClearVü which provides a nearly photographic view with excellent resolution and target separation in both freshwater and saltwater. For customers who want to see what’s located on both sides of the boat, the ECHOMAP UHD 7- and 9-inch SV models add support for SideVü, provided the transducer also has the right crystals. SV units packaged to include the transducer will have the SV crystals.

The fishfinder feature allows for zooming in on individual areas. 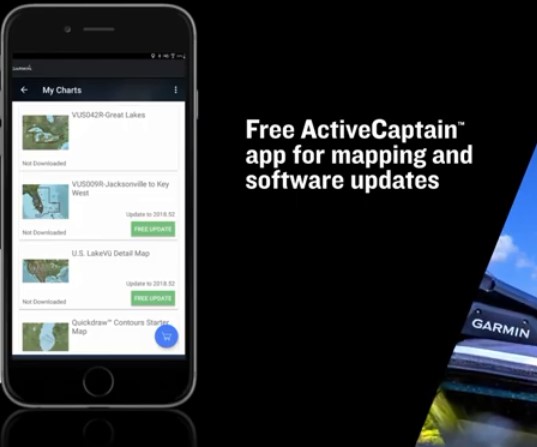 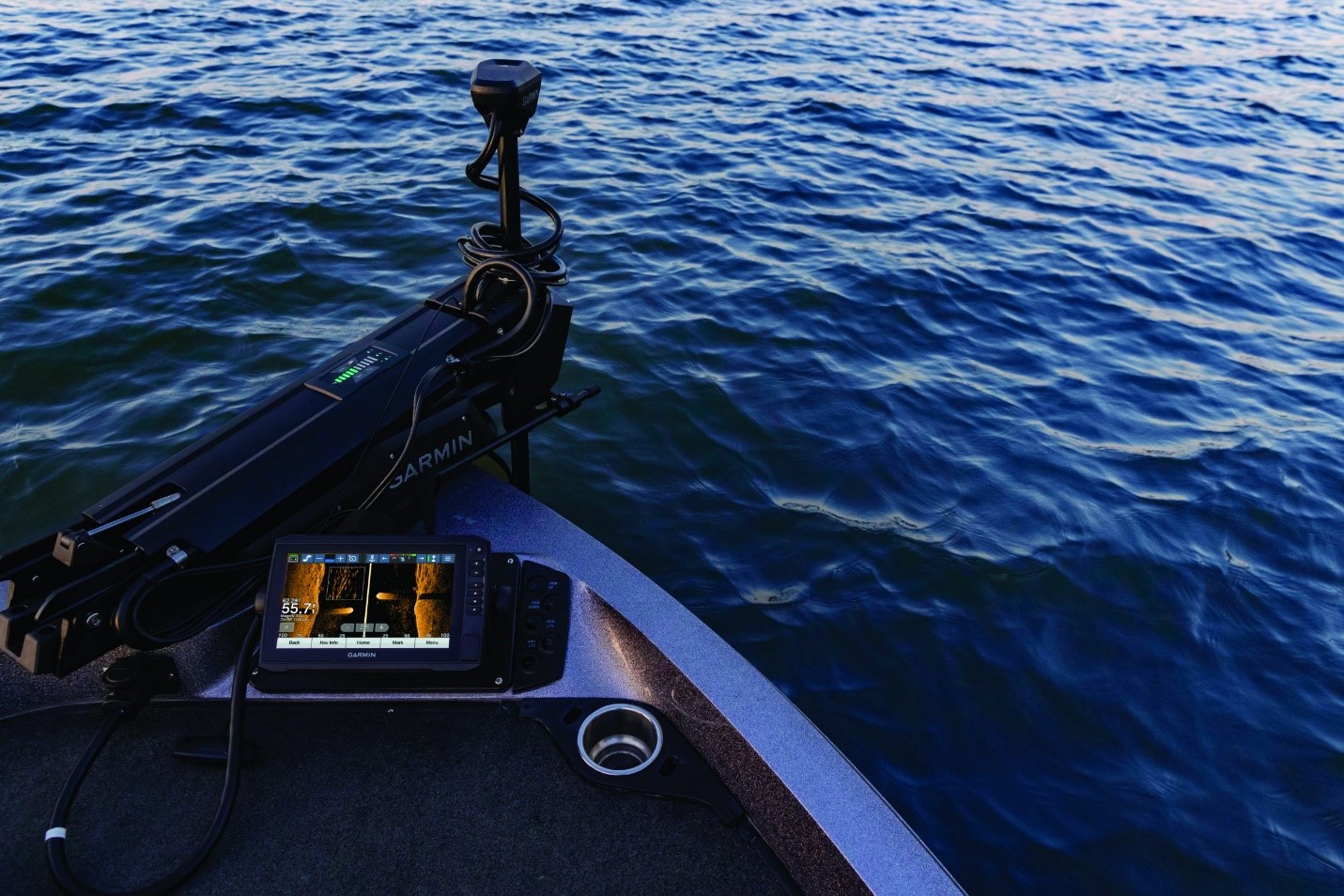 Compatible trolling motors connected to an Echomap can automatically maintain station or be set to navigate to waypoints.

Compatible ECHOMAP PLUS or ECHOMAP Ultra devices can share information such as sonar, user data and charts among them.

The Garmin Echomap UHD series is compatible with and has a port for connecting with optional Panoptix LiveScope. 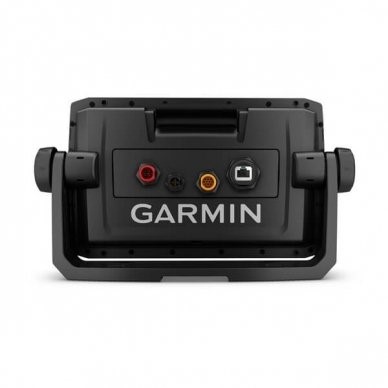 Echomap screens have quick-release bail mounts that allow the operator to easily remove and secure it.

The Echomap also has the capability to connect autopilots, digital switching, weather, engine data, Fusion-Link Audio system, VHF and AIS data via NMEA 2000 and NMEA 0183 support - in a single screen.

Echomap with ClearVὕ and Traditional Chirp comes with choice of map(s). Transducers are extra.

Echomap with SideVu and ClearVu and Traditional Chirp come with choice of map(s). Transducers are extra.

Extra $100 on all products that include GT54 Transducer Bundle.

Echomap UHD are also available with a flush mount unit. 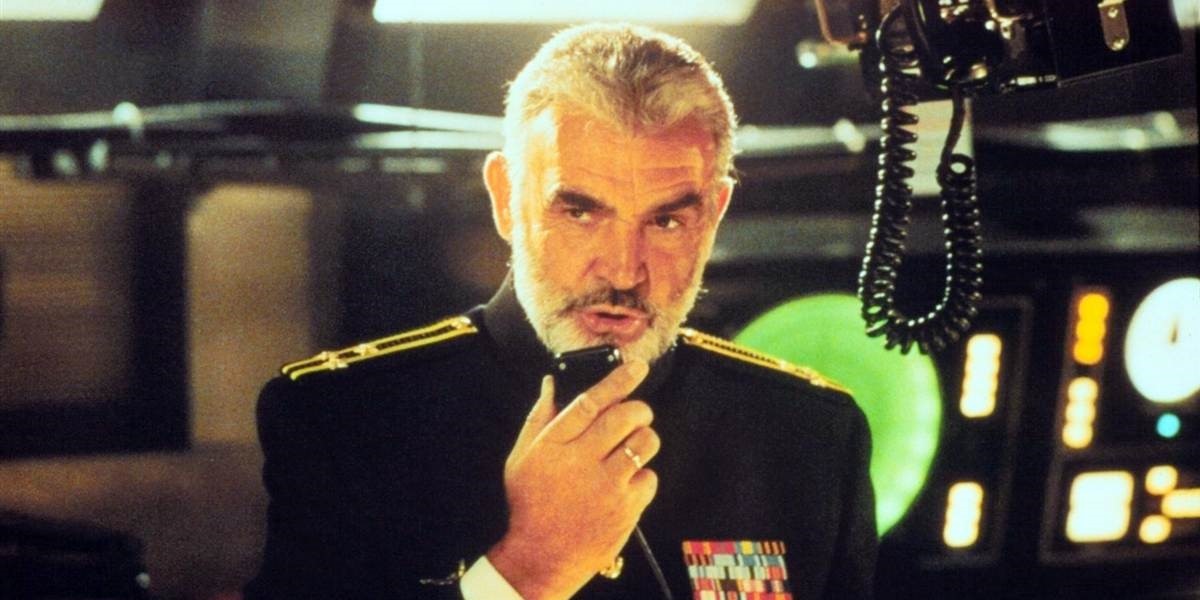 Sean Connery in Hunt for Red October asked for “one ping only”. Sonar has come a long way since then.

For over 30 years, Garmin has pioneered GPS navigation, wireless devices, and applications that are designed for people who live an active lifestyle. Echomap’s chart navigation helps identify and mark an angler’s favorite spots. The sonars show what is there when the boat arrives, and the system can even direct a Force trolling motor to take direction from the system to patrol a favorite patch. That’s a lot of capability in a detachable screen that stays clear even in bright sunlight. Echomap makes a very appealing package for boaters and anglers alike who care what lies beneath the waves.