Marinco’s new 30-Amp Surge & Safety Pigtail is a new shore power connector designed to protect against electrical surges and detect unsafe electrical conditions that can damage equipment on your boat. It has integrated LED lights that illuminate when they detect unsafe conditions such as an open ground, open neutral or reverse polarity.

The male side of the pigtail has a 90-degree right-angle dockside plug. It’s rated for 30 Amps and 125 volts and it locks to the outlet at the dock. The female side is also for 30-Amp 125-Volt connections and has a sealing collar system.

The pigtail has a surge protection rating of 825 Joules with a response time of less than one nanosecond. Integrated three-color LED status indicators detect faulty pedestal wiring conditions such as an open ground, open neutral or reverse polarity, and will alert you if a surge has compromised the adapter. The three-colored LED lights make it simple to check the status at a glance. 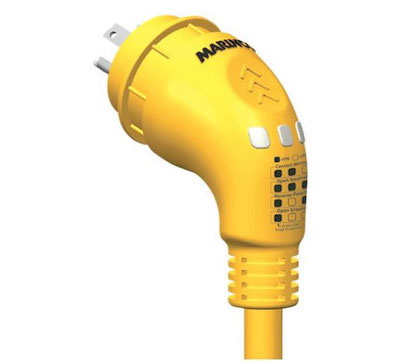 The new male plug has an ergonomic right-angle design to make it more comfortable to use and the LED lights indicate the status of the electrical system it’s being plugged into.

The cord and couplers are made from PVC nylon and have a five-year warranty.

The new Surge & Safety Pigtail along with a full range of Marinco electrical products can be purchased at Defender Marine.