The Back Cove 29 had a very good seven-year run, but now it is time for a new, improved version – called the Back Cove 30, and she is all-new from bow to stern. The first Back Cove 30 is scheduled to hit the water this month June. Orders have already been taken, so new customers will have to take a number. The new Back Cove 30 comes with the Yanmar LP 315-hp as standard power, she is 2,000 lbs. (909 kgs.) heavier, is 9” (23 cm) beamier, and a foot longer (30 cm) than the 29’ model it replaces. Most important of all, Back Cove has managed to hold the price pretty much where it was with the smaller, older boat – about $198,500 MSRP. We think the Back Cove 30 is a significant improvement over the boat it replaces.

The new Back Cove 30 is slightly longer, wider and heavier than the old 29 she replaces.

While there are many changes and upgrades in the new Back Cove 30 over the old 29, 9 things pop out at us right away as being noteworthy. Let’s take them one at a time—

The nine inches of added beam may not sound like much, but it is 7% more, and that has allowed Back Cove to do two important things on the bridge deck. First, it permits a bench seat to be placed on the portside facing forward so that a companion or two can join the skipper in piloting activities. We like facing forward when we’re boating and now three sets of eyeballs can be keeping lookout forward. Second, a sofa for two has been added to the port side just abaft the forward-facing seat. These two additions mean that four more people can be seated on the bridge deck of the new 30-footer.
Added beam also pays off in the cabin, as well, creating a larger, more comfortable V-berth both for sleeping and when using the berths as seats around the table. Nine inches also turns into more usable stowage space for dry goods and oil skins. In the cockpit, Back Cove has been able to add an extra step from the cockpit sole up to the side decks.
The added beam will also make the boat more stable at rest.

There is a lot to like about the new Back Cove 30. Compare it with the old 29 below.

While the Back Cove 29 was conceived as a boat for a couple, perhaps it did not fully appreciate how much the boat would be used for entertaining. And the prime entertaining area on almost every boat in this size range is the cockpit. The Back Cove 30 was two comfortable seats, one each in the port and starboard quarters of the cockpit. This not only provides seating, but also much-needed storage beneath.

The 29 did not have a transom door. That meant that visitors who came by tender had to climb over the transom to get aboard. From a floating dock it meant that everyone had a big step up from the dock the boat’s gunwale to board. With the new transom door on the 30, entrance and egress will be easy.

When we tested the old 29 several years ago she was powered by the Yanmar 315-hp engine, so we have a pretty good idea of how the new boat might perform. The added beam and the 2000 lbs. (909 kgs.) added displacement will – all things being equal – reduce the boat’s speed somewhat. But, of course, all things aren’t equal. The hull is one foot longer, there is an “advanced prop pocket hull design” and the boat has reverse chines – all elements which should improve performance. The WOT speed we recorded on the old 29 was 27.5 knots with a 7/8ths fuel load and two people aboard.
Backing off the throttle 14%, at 3250 rpm our Back Cove 29 registered 21.7 knots and got 1.85 nmpg. This is where most people will feel comfortable running the boat, and maybe even a bit slower at 20 knots. (We find that running a 20 knots makes navigational math easier.)

As noted above, the new Back Cove 30 has 2,000 lbs. more displacement. Most of that added weight is because of the added material required to make the boat beamier. Other new structures such as the new seats in the cockpit and on the bridge, also added to the boat’s weight. We like the extra weight because it makes the boat more comfortable in a seaway, and it, along with the added beam and reverse chines, will make the boat more stable at rest.

The new 30 has what Back Cove calls a “traditional spoon-shaped bow” that flares to throw water down and away from the hull. That and secondary spray rails should do a lot to help keep the deck and windshield dry. Another benefit of the new bow flair is that an added storage shelf can be installed in the forward cabin.

The new 30’s entire helm deck sole rises on a hydraulic life to expose the engine compartment below. This is said by the folks at Back Cove to make access to service points on the diesel engine “exceptional.” This is a big improvement on the access hatches on the 29 to the engine and engine room.

The most obvious change is the slight tumble home added to the transom. That, together with the flair in the bow and the rounded edges of the cabin, all work together harmoniously to create a pleasing “Downeast” look without being squared-off like most Maine workboats.
Back Cove has made its reputation by giving good value for money, and for doing the important structural and mechanical things right. The company is owned by the same folks who build the Sabre powerboat line, which is more expensive and more up-market than is the Back Cove line. So, if the price-point of the Sabre models are too rich for your blood, or you just don’t think you’ll be using the boat enough to justify the extra cost, then Back Cove’s line of boats is a good option. 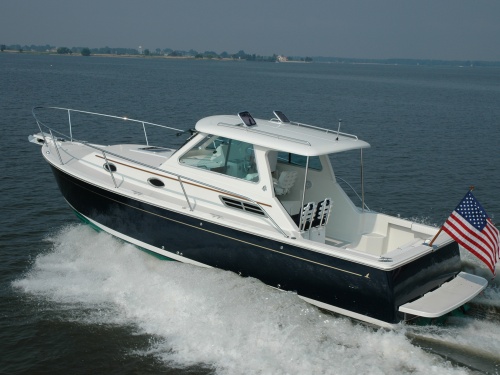 Back Cove 29 (Not in Production) 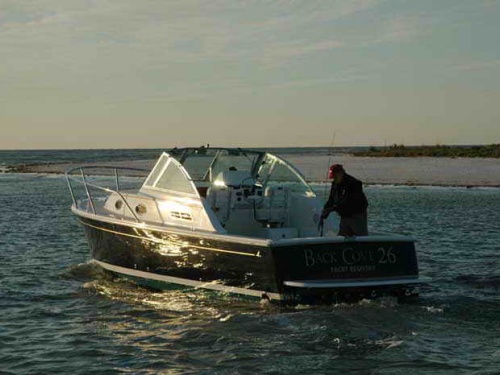 Back Cove 26 (Not in Production) 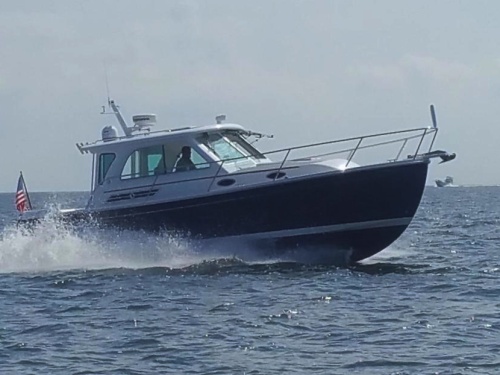