Deckboats are huge in popularity due to the fact that they hold so many people, 14 in this case, and do so while still being able to handle coastal conditions better than pontoon boats with comparable capacities. With outboard power, the 250 SunCoast OB is able to add even more interior space without sacrificing performance or handling. 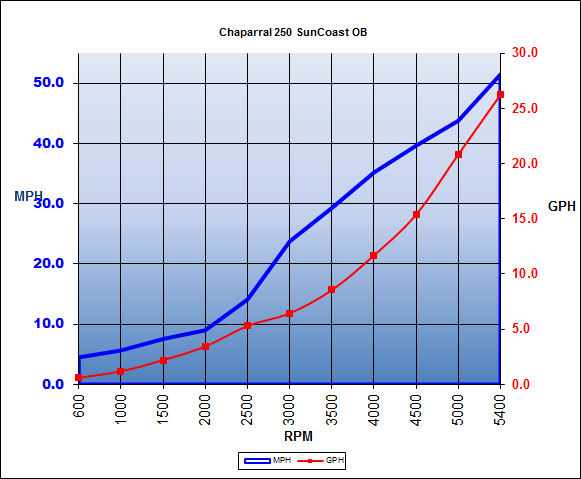 Chaparral created the 250 SunCoast OB to meet the needs of boaters looking to acquire a premium deckboat with outboard power. Our tests show her to have the trademark Chaparral handling along with quality treatments to the interior that we’ve now come to expect from the brand.

For example, there’s an abundance of stainless steel, which can be seen in the usual places, such as all grab handles and drink holders, as well as in the more mundane places, such as speaker grills and door latches. Vinyl is thicker, 38-mm with a 10-mm topcoat and the multi-density foam includes a mildew inhibitor. We’re also impressed that the integral swim platform has full walk-around capability instead of being cut off ahead of the motor well. All of these little details add up to a quality boat that excels at entertaining while maintaining the agility of a sportboat. 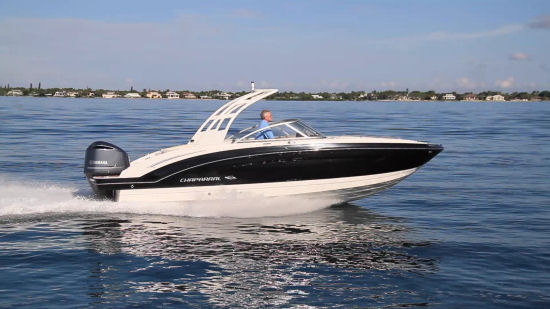 Top speed during testing was 51.5 mph.

She was also quick to accelerate reaching planing speed in 3 seconds, coming to 20 mph in 5.2 seconds, and continuing past 30 in 8.5 seconds. 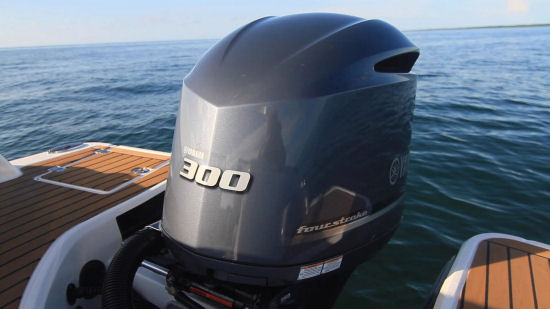 Chaparral will power the 250 SunCoast with a 250-hp or a 300-hp outboard from Yamaha or Mercury. We tested with the 300-hp Yamaha XCA.

She leans a comfortable 11-degrees into the turns and shows no tendency towards chine walking or falling off the turn. Her minimal bowrise upon acceleration produces no loss of visibility from the seated position. 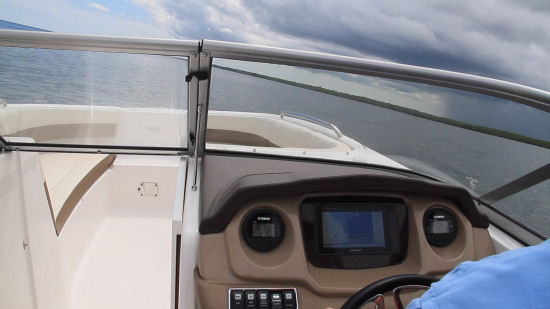 The 250 SunCoast OB leans 11-degrees into the turns, remaining comfortable throughout.

We had a perfectly flat calm test day so we can’t comment on her sea handling capabilities, but Chaparrals don’t disappoint and she did present a solid ride of a much heavier boat. This bodes well for those who tend to bring guests aboard that are nervous boaters.

With any deckboat, the main feature is accommodating guests, and with the 250 SunCoast OB she has a capacity for 14. Let’s look at where we can seat those guests.

The bow features the typical seating arrangement of twin lounge seats. However, since Chaparral carried the beam so far forward, these seats do not meet each other as they come forward. Instead, a step to the foredeck divides the two. Further back, the seats have 27” (68.6 cm) of separation so occupants facing each other won’t be knocking knees. Between the bolsters there’s 6’2” (1.9 m) so no one will be feeling claustrophobic either. There’s also plenty of room for the standard side-mount pedestal table. It has dedicated storage in the helm console. 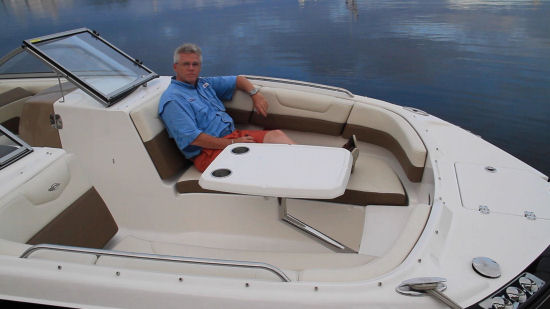 Even with legs stretched out, Captain Steve still has additional room past his feet. The table does little to limit the useable space for gathering. Naturally an optional filler cushion is available to turn the entire area into a sun pad.

There are the usual accommodations for storage underneath the seats but Chaparral went to the added trouble to include articulating hinges to the aft side of the cushions. Also, the grab handles got a little bit of TLC as well. Instead of having a round cross section, these are all elongated. It makes it just a bit easier to wrap little fingers around and that’s a feature that parents will appreciate when the kids are riding up front. Chaparral does this to the rails in-house. Parents will also welcome the depth of the bow seats, 17” (43 cm) to the top of the bolsters…20” (51 cm) to the top of the rails.

The cockpit makes a perfect spot to gather for conversation, snacks, or docktails. Seating wraps nearly all around the full cockpit, interrupted only by the walkthrough to the transom. The side-mount pedestal table can be relocated here to increase the entertainment aspect.

The observer’s seat can be used either forward or aft-facing simply by lifting and flipping the seatback fore and aft. The helm seat, having only a fore and aft slide, does not swivel to join the crowd at the cockpit. 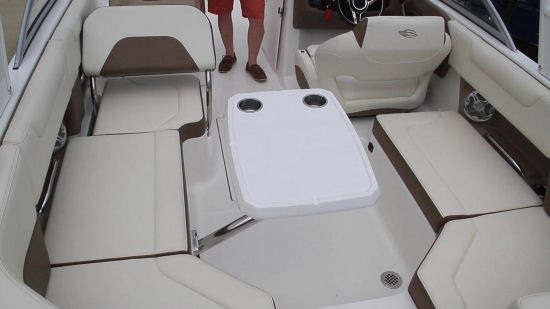 U-shaped cockpit seats end at the helm to one side and a reversible observer’s seat to the other.

Coving, or anchoring and swimming off the stern, is a pastime enjoyed by the vast majority of boaters. That means the stern has become an integral component of how we enjoy our boats. For that reason, two aft-facing seats have been added to the stern of the 250 SunCoast OB. The surfaces of the seats are non-skid so they serve double duty as steps to a fixed pier. An optional stereo remote was located to the starboard gunwale on our test boat. 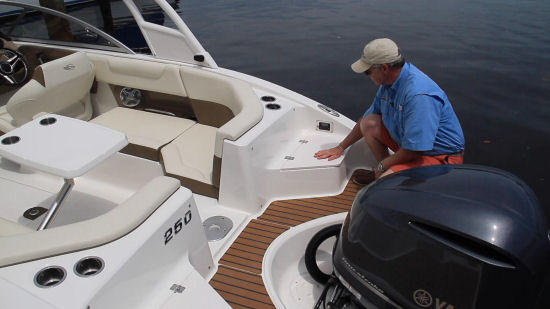 Two aft-facing seats at the transom make a great place to watch the kids swimming off the stern. Cushions would be a welcome addition. A stereo remote is to starboard.

Under these stern seats are spaces housing the battery switches to starboard and the batteries themselves to port. Both are in areas that go right down to the bilge area. Because they are so deep, with no dividers, it really isn’t fair to call this storage, but the inclusion of removable bins would certainly be a step in the right direction for Chaparral.

Chaparral did a nice job with the helm on the 250 SunCoast OB. Digital gauges to either side of an optional Garmin 70S make what can only be described as a minimalist, but quite functional, helm panel. 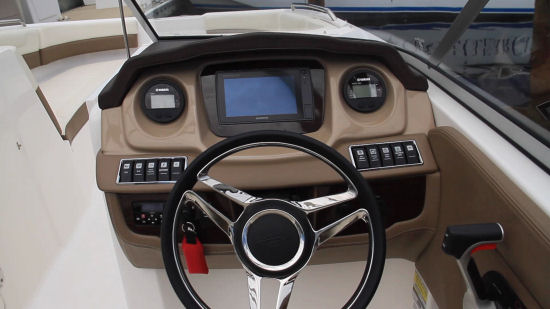 Earth tones eliminate any concern for glare either from the panel or from reflections in the windshield. A dark vinyl brow contrasts the tan console. The automotive type steering wheel is stainless with a leather grip surrounding. Rocker switches all have labels and icons for international use. The stereo is to port. An over-wide 32” (81 cm) helm seat includes a flip-up bolster, and in pure Chaparral fashion, the control for the slide release is located at the left side of the seat, not hidden from view underneath.

Among a long list of attractive features on the 250 SunCoast OB are the various amenities that make the boating experience more enjoyable for both the owners and their guests.

A beach reboarding ladder is among the top of the features that most will enjoy, particularly since the 250 SunCoast OB lends itself so well to beaching. Chaparral managed to do what others haven’t figured out how and that is combining the reboarding ladder and the anchor in the same compartment. Time and again this is an “either/or” proposition but not so here. 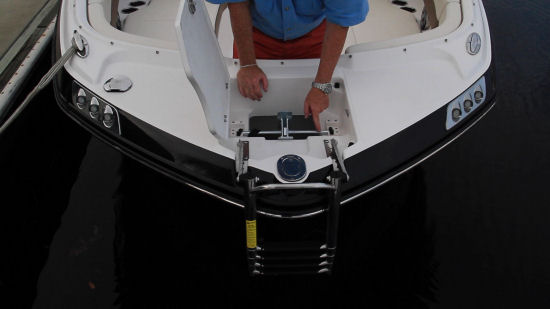 Chaparral combined both the reboarding ladder and anchor in the forward compartment. The navigation light is flush mounted and flips when in use.

The foredeck is treated with non-skid so it serves as a safe boarding zone as well as a launching point for entering the water. The ladder itself is a four-step and the bow is notched to accommodate both the ladder supports and the anchor rode. The forward navigation light is flush to the deck and flips around when in use. Two pull-up cleats are to either side of the bow, the first of the boat’s eight cleats total.

An optional bow freshwater washdown serves to clean off those sandy feet before stepping back aboard as well as making an ideal anchor washdown. It’s tapped into the boat’s 10-gallon (37.9 L) water supply and features a stainless hose, which is easier to store thanks to the weight, plus it won’t kink. Three LED docking lights to either side of the bow are on the boat’s standard equipment list. 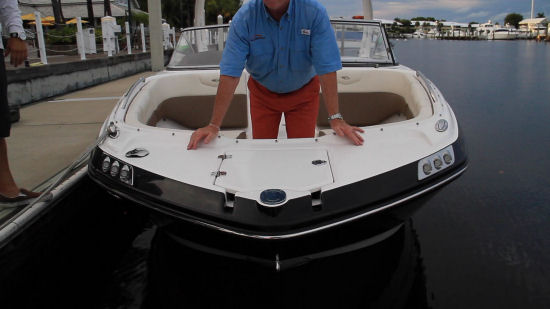 The foredeck is treated with non-skid. A shower is just to the left and below are the standard LED docking lights. 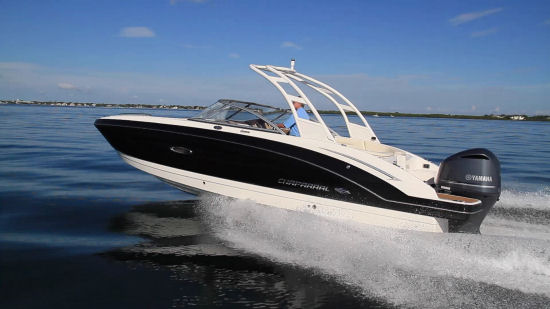 A hinged sport arch is available as an option. It provides for an elevated towpoint and it adds well to the good looks of the 250 SunCoast. 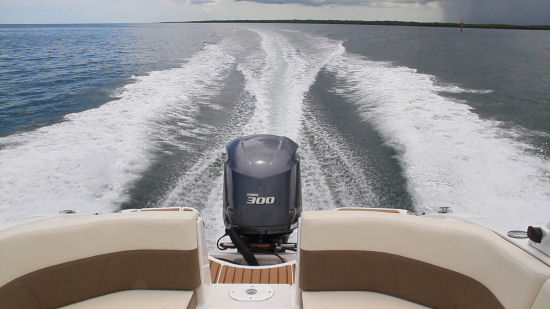 An additional ski tow pylon can be added to the walkthrough and will keep the towline over the top of the outboard.

Storage is Another Area Where Chaparral Excels. In the 250 SunCoast OB, we had deep in-deck storage measuring 7’10" x 2’5” x 16” (2.4 m x .7 m x 40.6 cm). To the side cockpit seats there’s a built in, self-draining, insulated cooler to port and a 25-quart (23.7 L) carry-on cooler to starboard. Under the aft seats is full-beam storage and a dedicated spot for the optional water toy inflator. 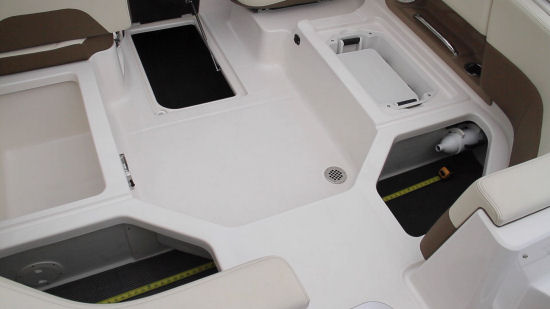 Here we have coolers to port and starboard, in deck storage, and full beam storage across the transom. 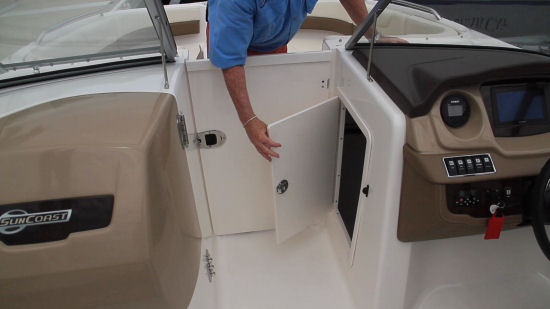 Additional storage is under the helm console. A separate door is behind the air dam, which lies flush with the console when in the stowed position. Notice the stainless latches.

A head compartment occupies the port console. As a large number of boaters choose to use this space for additional storage and there is built-in storage behind the standard Porta-Potti for the optional bow filler cushions. An electric toilet is also offered and the cabinet and sink are upgrade options, too. Inside there’s 45” (114 cm) of overhead clearance, just enough for our test captain to not have to duck his head while seated. 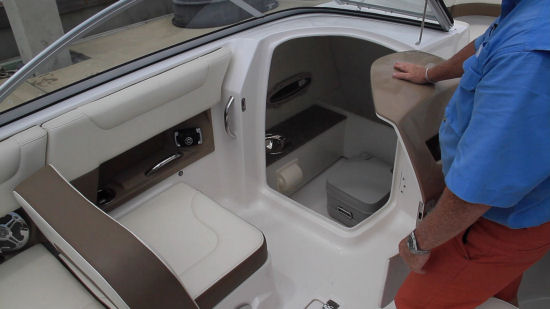 The head door can be opened even with the observer’s seat converted to aft-facing.

The swim platform is not without its perks. Firstly, it’s large enough to accommodate full walk-around capability. Normally the area ahead of the engine is blocked off and we have to step across from one side to the next. Here, there’s plenty of room to walk on the flexi-teak decking from one side to the next. The platform also extends all the way to where it is even with the back of the engine which makes entering and exiting the boat easier. A concealed reboarding ladder is to the starboard side. 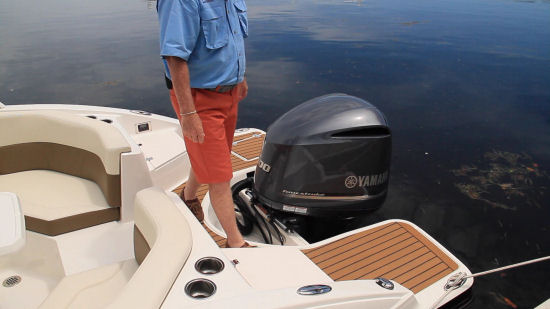 The swim platform is large enough to walk across the front of it and extends to the back of the engine.

This is a new model for Chaparral and we tested hull #1. As such, she’s still getting tweaked just a bit and therefore pricing was not available as yet. But from what we’ve seen, she certainly fills the bill for a well-heeled entertainment platform, whether the good times will be at the dock, on the water, or at the end of a towline. 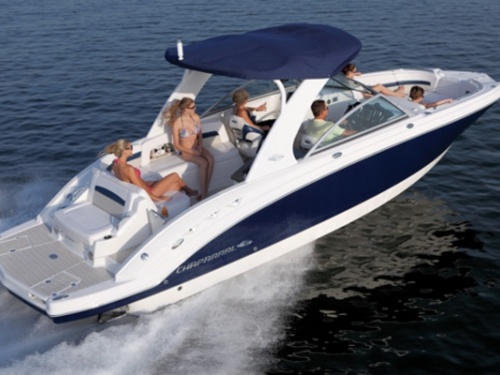 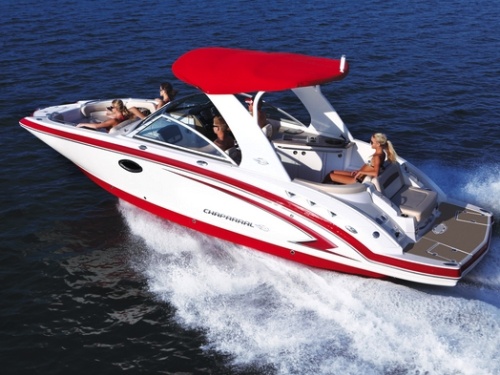 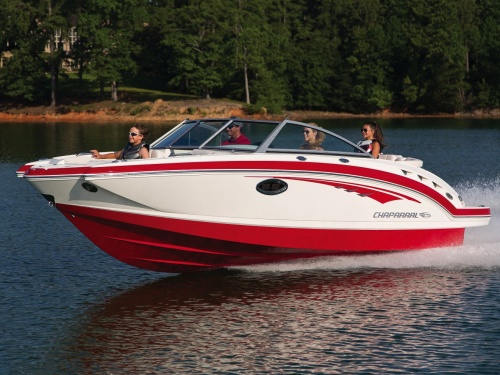 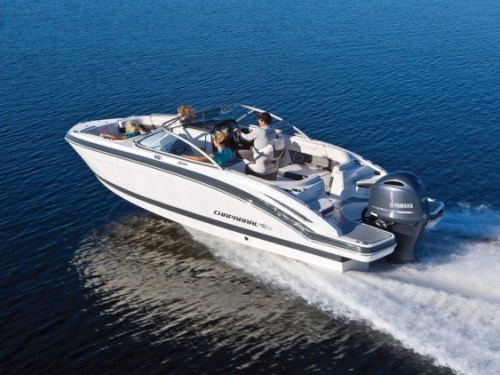