Whether you believe in global warming or not, or that the world’s oil supply is running low, or that we all descend from aliens, the truth is simple: Fuel is getting very expensive, no matter what the cause. And powerboats burn a lot of it. It’s bad enough in the U.S., but even worse in Europe, where gasoline costs almost as much as single-malt whisky, and even diesel can put a dent in your Euro-stuffed wallet. So is it any surprise that a couple of innovative designers have developed the Greenline Hybrid 33, kind of a seagoing Prius that combines batteries, solar cells and a Volkswagen diesel to create an economical cruiser? No – what’s surprising is, these guys are from Slovenia, not usually considered a boatbuilding Mecca. 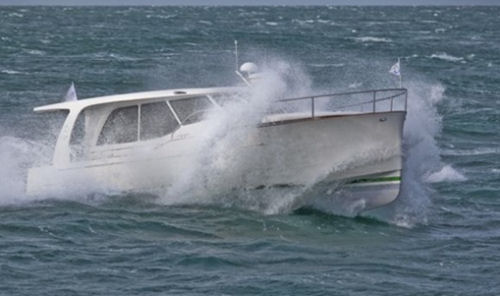 The Greenline Hybrid is engineered and built in northern Slovenia (a long way from the sea) by Seaway, one of the world’s leading boatbuilding companies. We hope they remembered the windshield wipers.

Jernej and Japec Jokopin designed the Greenline Hybrid 33; the brothers work together as J&J Design. Since founding their company in 1983, they have designed more than 250 powerboats and sailboats for Beneteau, Jeanneau, Dufour, ETAP and other noted builders. Their designs have won 33 Boat of the Year awards in countries around the world; the Greenline was voted European Powerboat of the Year for 2010.
Fifty Greenlines have already been built, even though production started only in January 2010. Most of them have been delivered in Switzerland, Germany and the Benelux countries. We have not located a dealer in the U.S., although there are many scattered worldwide, and at press time the company hadn’t responded to our request for price information. You might have to fly to Europe to buy one. 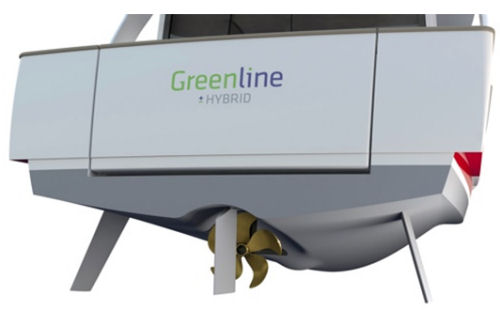 Tear-away stabilizer fins not only knock down rolling, but also protect the prop and shaft during groundings and deflect debris from fouling the running gear. The fins will tear away during a hard impact without damaging the hull, and are easily replaced.

The Jokopin brothers designed the Greenline hull for maximum efficiency. Its underbody, derived from sailboats, is shaped to require less energy to move at displacement speeds, but also to be able to achieve up to 15 knots with minimal power. They call it the Superdisplacement low-drag hull, and claim it will consume half the fuel per mile of a typical displacement hull and one-quarter that of a semi-displacement, twin-engine planing boat. Its modest horsepower requirements allow efficient electric propulsion using power supplied only by batteries and solar cells.

The electric motor/generator is mounted between the diesel and shaft, where the gearbox ought to be. Electric motors have such high torque at low rpm that they don’t need a reduction gear to spin a full-sized prop. Juice comes from both an array of lithium batteries and solar panels; when voltage drops, the engine starts. It all happens automatically.

Combining an efficient hull with modest speed will result in low fuel burn, but low wasn't enough for the Jokopins – they wanted zero, at least at times. Rather than simply install a low-power diesel, the brothers designed a hybrid powerplant that combines a Volkswagen marine diesel linked to a conventional propshaft, an electric motor/generator, lots of lithium batteries and solar cells on the coachhouse.

For cruising, the main propulsion is the diesel, just like in a hybrid car the engine does most of the driving. Top speed with the standard 75-hp diesel is 10 knots, according to the builder, with a range of 700 nautical miles at 7 knots. A 165-hp VW diesel is optional, and boosts top speed to 15 knots, again according to the company; we haven't tested the boat ourselves.

The main-deck layout is typical, about all you can do with a boat like this. The saloon can sleep three in a pinch. The galley is the L-shaped cabinet aft, to starboard.

But for low-speed work, the electric motor can do the job on its own. It will move the boat up to 20 nautical miles at 4 knots if the batteries are fully charged, shorter distances at 6 knots, the maximum speed under electric power. The Greenline Hybrid carries a 240-amp/hr bank of lithium batteries that can be discharged 100% and brought back to life, just like the batteries in your laptop or cell phone. The builder claims a typical battery bank will last for 10 years and thousands of discharge/charge cycles. Maintenance-free, the batteries weigh about 1/7 as much as lead/acid cells and take up 1/3 the space. Connected to a 3-kW inverter, they produce a constant 230 volts for ship's power, too.

The V-berths can slide together to create a double; they are standard size, just like single beds on shore, so regular sheets will fit fine. There’s lots of hanging-locker space, and a nice head compartment. But the Hybrid systems take up a lot of space.

The Achilles's heel of electric motors is, of course, maintaining the power supply. So how do you keep the Greenline Hybrid's batteries charged when away from the marina? When under diesel power, the electric motor switches hats and becomes a 5-kW generator; the diesel is also the primary charging system at anchor, running in neutral: A controller starts the engine automatically when voltage drops. 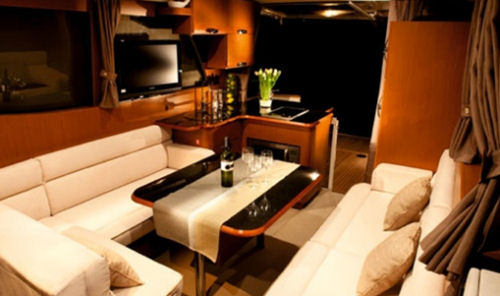 Seaway does a nice job building the Greenline – dig the joinery and décor in the saloon. Putting the small galley way aft means it can serve the cockpit as well. The aft door opens wide to integrate indoors and out.

It’s a Solar Sailboat, But Slow

If the sun's out, the 6-solar-panel array on the cabintop can produce up to 1.3 kW; the company says the solar panels alone can recharge the batteries to 80% in a full day of sunlight. When motoring slowly under electric power – the builder says around 3.5 knots -- the solar cells can produce the same amount of energy the motor consumes, turning the Greenline Hybrid into a "solar sailboat," at least until nightfall. But 3.5 knots is pretty slow, so we think not even sailors will be happy at that speed. 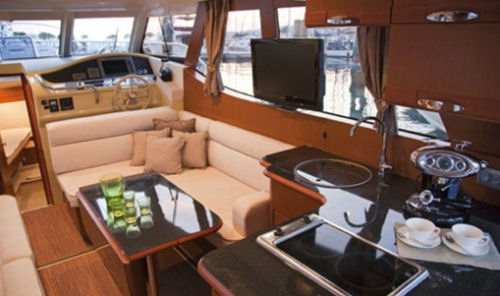 Looking forward in the saloon from the aft door. The galley is rudimentary, but adequate for the kind of cruising most folks will do with this boat. We’re not crazy about the TV perched over the L-settee; maybe it’s an option. The sculpted helm has a flip-down seat. 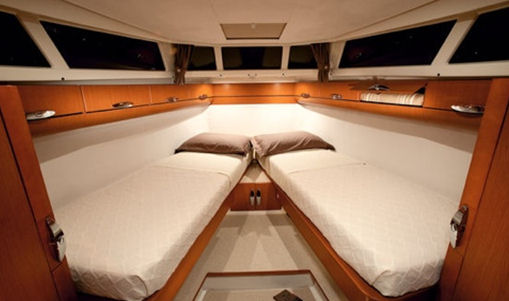 The only cabin is forward, with V-berths than will slide together to create a double. There’s lots of stowage here – note the lockers over the berths – and plenty of light from wraparound windows on the cabin trunk. You wouldn’t want to live on the Greenline Hybrid, but it’s a nice boat for a cruising couple looking to get away for a week or two.

Some of us here at BoatTEST.com are dedicated Greens – we drive Priuses and so forth. Others are not. (“Gas-guzzling cretins” comes to mind.) But we all like to save money, and we bet you do, too. Is the Greenline Hybrid 33 the way? It is a cool boat, but will the cost (which, again, we don’t know) and complexity be worth the fuel savings? We expect not: You can save money and stay simple by buying a low-powered diesel trawler and cruising at 7 knots – fuel burn skyrockets when you want to go fast. The Greenline is basically a 7-knot boat, and almost any 7-knot boat is pretty cheap to run. If you really want to save fuel, buy a sailboat – a wooden sailboat, since fiberglass resin is made from petroleum, too.
If we lived in Europe, where just looking at the price at the pump makes one’s eyes water – and then you realize the prices are per-liter, not per-gallon! – we might think differently. But what we like most about the Greenline Hybrid – the retro styling and excellent finish – isn’t dependent on the powerplant. It’s a nice boat, but would be just as nice with simple diesel power, and probably more reliable, too. (Although we like the solar panels for keeping the batteries charged at anchor.) So if you believe in being green at all costs, take a look at one. (Don’t think about the carbon footprint you leave by flying to Europe.) Otherwise, shop among ambling, low-powered trawler yachts. There are scads of them.