Plumbing and wiring are among the most important jobs on any yacht, and how this is handled varies from one company to the next. At Hatteras Yachts, they take a serious approach to the issue, and we recently took a factory tour to inspect how they do it. 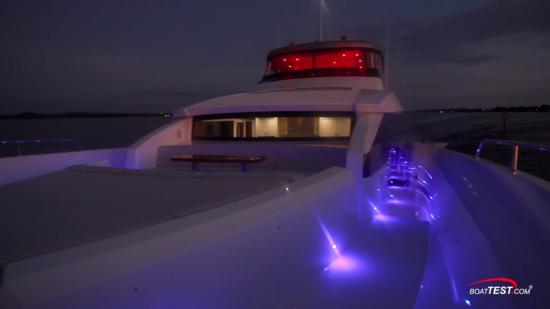 With so many electrical connections on a large yacht, the work must not only be done right the first time, but made to last for the life of the yacht. This is not as easy as it sounds because of the harsh marine environment. Imagine your house pounding through 6’ waves for years.

Plumbing and wiring is a factor that the company takes seriously, since long down the road, failure is not an option. After the hull is released from the mold, that’s the time to go in and do the motherload of the installations. After the hull is released from the mold, the workers go in and tackle all the plumbing and wiring tasks.

ABYC Standards. Not only does everything need to be secured properly, but secured at specified intervals so that it all stays secured when the boat is underway. Obviously, all the wiring is ABYC (American Boat and Yacht Council) compliant, and Hatteras standards exceed those standards in several respects. For example, standards call for two tie wraps between each 12” (30.5 cm) to 18” (45.7cm) of clamp spacing, but Hatteras goes with three between 12” clamp separations.

It should be noted that Hatteras personnel over the years were instrumental in writing the ABYC standards in the first place, because they were judged by their peers to be the most knowledgeable and experienced engineers in the industry. 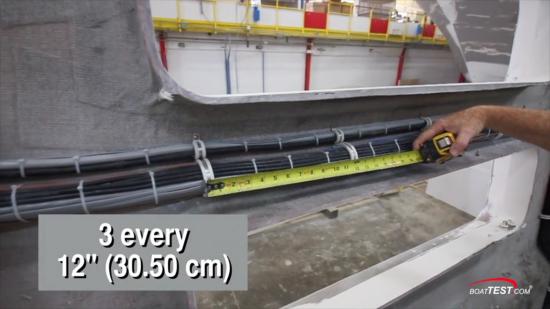 Hatteras uses three tie wraps for every 12” of clamp separations.

The plumbing and water lines are secured the same way but with two ties between clamps. Even though all these will be hidden, they are still properly routed and secured rather than just draped from the beginning point to the end. Where workers leave coiled plumbing lines, they’re waiting to get connected to the components that will be lowered in to that location later. 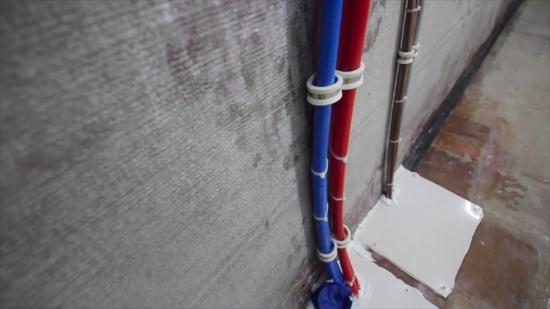 Water lines get supported twice between clamps. Notice where the lines go through a deck; added support is included, and the pass through is sealed with adhesive caulking.

The process doesn’t stop there. The entire electrical system is bonded together. Hatteras uses a 2” (5.08 cm) wide copper bonding strap that goes from stem to stern, and everything from all the underwater gear to any heavy metal devices are bonded to this strap. 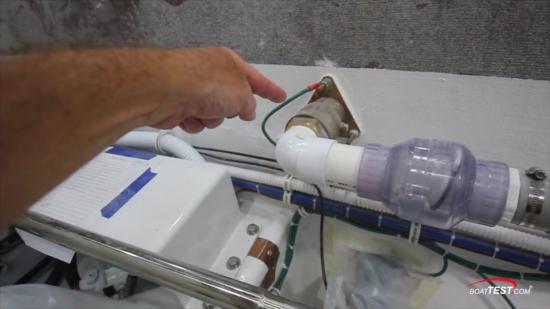 Here we can see where a wire is connected from a thru-hull fitting down to the bonding strap below.

It, in turn, goes straight to the stern where it can be seen running through the engine room, and even connecting to both struts as well as being cross-tied across the struts from one side to the other so the entire system has maximum contact with the water under the hull. 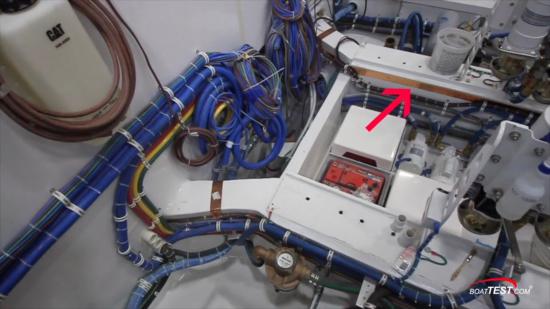 Here, we can see the copper bonding strap that runs through the length of the hull.

Wires are connected from the thru-hull fitting to the bonding strap on the stringer below. There are still more connections to the electrical system and even the main engine raw water thru-hulls. The bonding strap is also connected from through bolts to a bonding plate at the transom that then serves as a sacrificial anode. It deteriorates before anything inside the boat, much like the zincs on our rudders and shafts.

So, clearly there’s much more to wiring and plumbing a premium-level yacht than meets the eye, and now we can see how it all comes together in a Hatteras. It’s this attention to detail that makes the difference… the Hatteras difference. 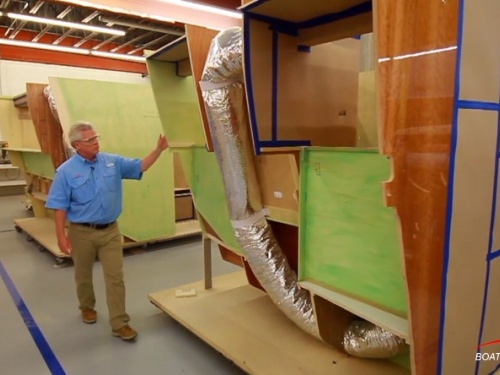 Hatteras Factory - Why So Expensive?