By any standard the new Jeanneau 64 is a remarkable yacht. She is about the same length of the 12 m "Courageous" which won the 1974 and 1977 America's cup -- but she has 5'6" (1.68 m) more beam and weighs 10,000 lbs. (4,536 kg) more! She is not just big, she is also superbly engineered, and easily handled by a couple despite her 1,829 sq. ft. sail plan (also about the same as a 39’/12 m yacht). No coffee grinders deck gorillas needed. She has a guest-friendly entertainment platform with 40% of it given over to the cockpit, and she is as modern and trendy below as a Paris runway during fashion week. Because she can be configured and decorated so many different ways, she can be considered a semi-custom build, as only the hull, engine, deck and basic rig remain the same in most versions. 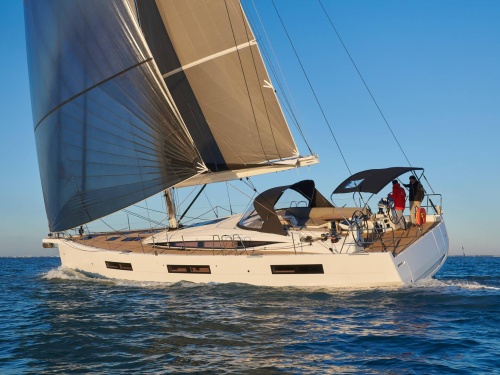