The Manitou 25 Encore was created to provide a more cost effective solution to those wanting to acquire a premium build, but not get all of the bells and whistles that drive the price up. While quality is still in the build, a lot of the puffery is left to the options list for the individual buyer to dial in to a specific price point. In this manner, the Encore has risen in the popularity ranks for Manitou, and it shows no signs of slowing. 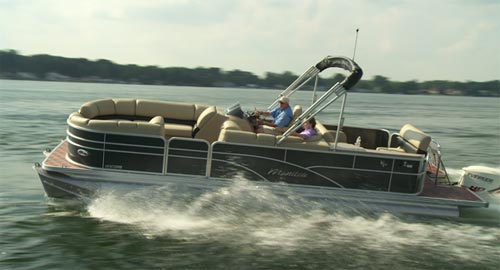 The 25 Encore’s mission is to create a premium build absent of the premium price tag. Moreover, she is big, roomy and ready to host a large party for friends. Three toons and adequate power make her watersports-friendly.

While we’ve seen varying tube configuration from several manufacturers, Manitou has their own take on the system and our testing proves that it works well.

The 25 Encore can be purchased in either a two-toon or three-toon configuration. The two-tube version costs less not only because there are only two tubes, but also because the outboard engine rating is smaller.
The two-tube version should be considered by people who don't plan to get into aggressive watersports activities. They’re more appropriate for sedate cruising, moderate-speed tubing, and of course for using her as a moveable swimming and entertainment platform.

Boaters wanting to go faster or take part in wakeboarding or waterskiing should consider the three-tube version. This boat can get up on plane quicker and also take on a larger engine, up to 150 maximum horsepower in this case. Because the center tube on the Encore is 5-1/4" deeper than the outboard tubes, it creates a pivot point for the boat to lean into turns rather than away from them. 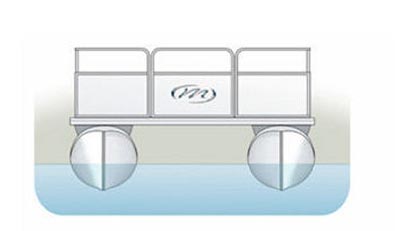 Twin tubes is the traditional pontoon configuration which is ideal for slow cruising with low-hp outboards.

Manitou's VP hull is capable of speeds in the low 30s with a 150-hp outboard and can be used for towing skiers. Note the lifting strakes on the large, center tube.

Manitou says that its V-Tube design was the result of over 10 years of research into discovering the best tube diameter, position, and shape to deliver optimal performance.

70% of the boats sold by Manitou are three-tubes incorporating the patented V-Toon configuration. It is this design which truly sets the 25 Encore apart from other brands on the market. The builder claims that this design allows the boat to have "sportboat-like" handling characteristics, that is to say, she leans into the turns like a V-bottom boat.

Lifting strakes are one of the few places where pontoon boat builders can easily differentiate their products. Manitou does not use reverse angles, which it says can cause pounding, but rather uses positive angle strakes to provide lift and improve performance.

The VP model has lifting strakes just on the center tube and the nose cones are of conventional thickness.

The VP performance package is simply designed for boats that operate at less aggressive speeds and lower horsepower. SeaStar hydraulic steering is standard, lifting strakes are only used on the center toon, and the nose cones are conventional. Maximum horsepower on the 25 Encore with the VP package is 150-hp. And that is what we tested her with.

The engine is mounted to an integral transom, rather than a separate engine pod. On deck, there’s a flat surface for working on the engine and easing daily engine checks. 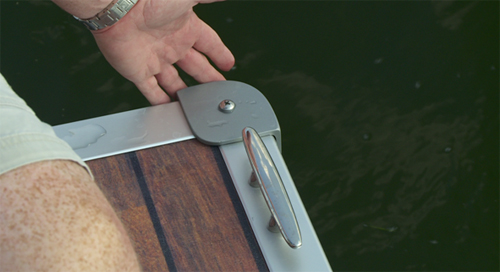 The aft corners are reinforced so as to take a hit against the dock. Four cleats are in the corners, but I’d like to see two more added to the center of both sides. 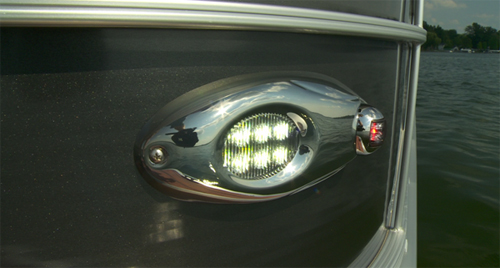 The LED docking lights are built into the assembly for the navigation lights. It is then mounted high up on the fence well out of the trip zone. 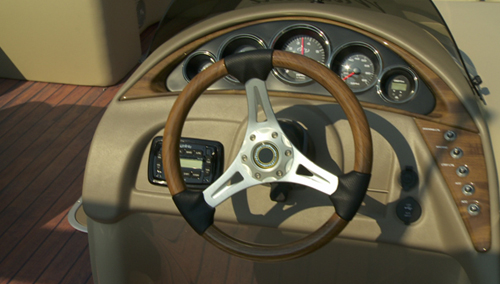 The helm consists of light tan colors so that glare is kept to a minimum, and Manitou included just the right amount of wood tones and dark faced gauges to add a certain level of class. Full instrumentation lines the top of the helm, and a switch array is to the right. All switches are lighted when activated. The three-spoke, wood rimmed wheel is mounted to a tilt base. 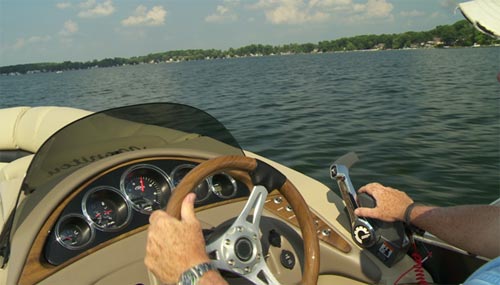 The engine controls are mounted to a 30-degree angle which is a big step in the right direction. 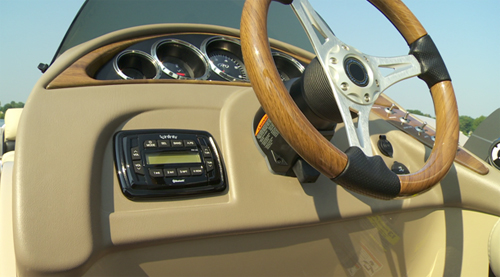 A premium sound system is offered that includes Bluetooth functionality. A remote control is at the stern booth seating.

The VP performance package did its job and clearly had us leaning into the turns with a modest 10-degree maximum bank angle. She was quick to respond to the throttle, planing in less than 3 seconds. However, the Sea Star Hydraulic steering was on the stiff side so there was no cranking and banking to be had. This kept maneuvers more sedate and docile which pontoon passengers will be more likely to appreciate.
As is typical with pontoon boats, adding more power doesn’t translate into a smaller turning radius, but does allow for completing the turn quicker. This is something to remember when approaching the dock. Adding a burst of power does not kick the stern around. She accelerated from a level attitude and settles back into the water the same way when taking power off. 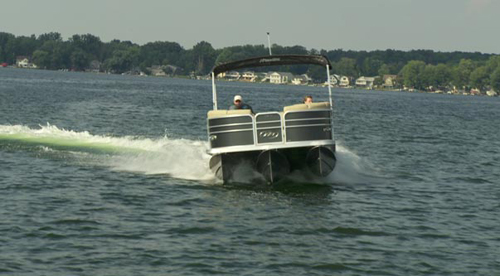 The Encore 25 has a modest 10- degree lean into turns as seen here.

The deck layout of the 25 Encore takes on the familiar configuration of twin couches at the bow, to either side of the forward entry gate. The port side couch is shorter than the starboard side to accommodate the port gate. All upholstery is comfort touch marine- grade vinyl. The usual accommodations for storage are underneath. 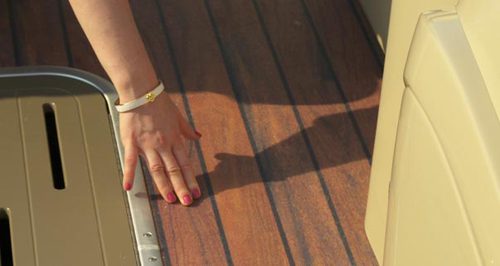 Low maintenance faux teak vinyl decking is offered as an option and it adds a classy look to the 25 Encore.

Across from the starboard side helm is a port-side quarter-round seat. Under the seat back is a trash receptacle. At the forward end is a concealed changing room that opens to provide privacy for getting out of the wet swimsuit and into some clothes for the waterfront restaurant. 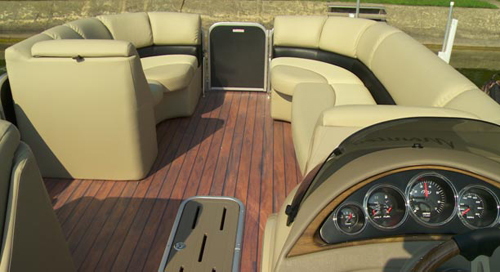 The configuration of the couches takes on the familiar look of one to either side of the forward entry gate. All are covered with pillow top cushions. All vinyl is marine grade for less upkeep while maintaining high looks. 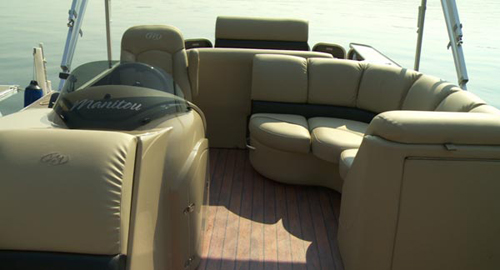 Curved seating is located across from the helm. This is a pleasant departure from the usual straight couch we typically see, or even the single bucket seat. 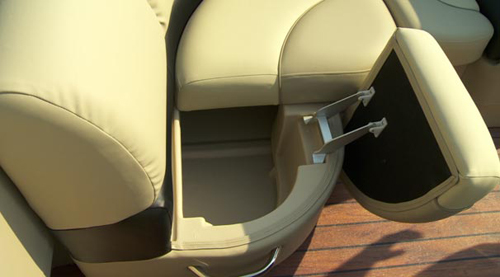 The usual accommodations for storage are under the seats, but notice how the hinges allow for full access without having to hold the seat cushion up with one hand. 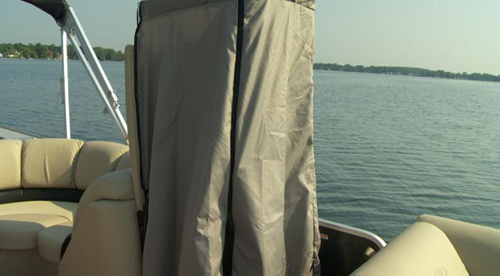 The forward end of the quarter round seat to port has a changing room concealed behind the back of the couch.

The new SR layout on the Manitou 25 Encore VP.

The stern has been updated to offer a new layout Manitou calls its SR layout. It consists of booth style seating providing opposing conversational couches. A pedestal table is provided to turn the area into a light dining venue. The aft seat back flips forward to create a double-wide chaise lounge. To the port side is counter space for preparing snacks. Storage solutions are underneath, and dual aft boarding gates are to either side of the aft couch. 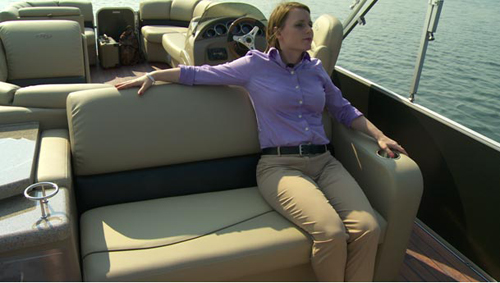 A double-wide aft facing couch serves as a comfortable place to relax, even while the 25 Encore is underway. 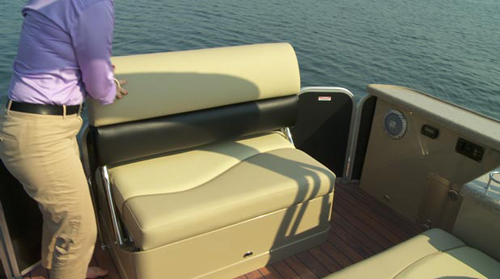 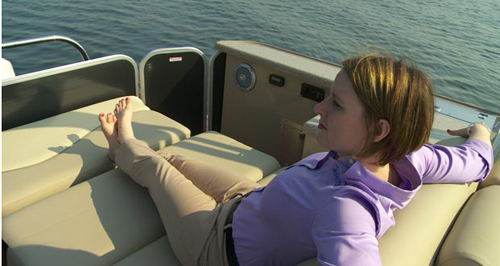 An opposing couch provides an intimate conversational area. And the seat back flips forward to create a double wide chaise lounge. 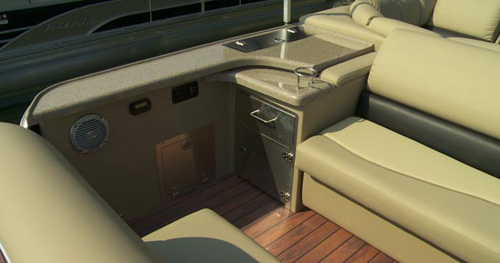 To the port side is counter space with storage on top creating a much needed area for preparing snacks for all onboard. 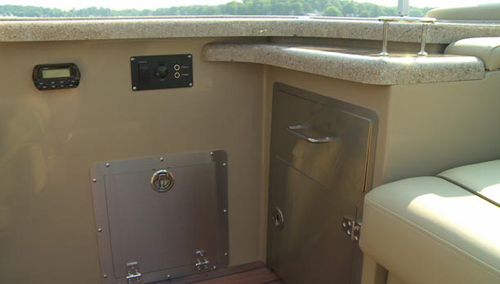 Under the counter is storage, including space for a carry-on cooler in the lower hatch. The hatch to the left opens bin-style to drop items into. An optional refrigerator is offered and would really round out the entertainment capabilities of the 25 Encore. 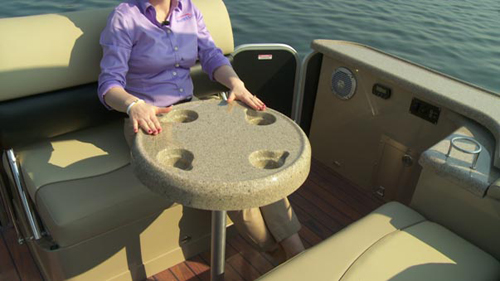 And the snacks can be enjoyed at the removable pedestal café table. 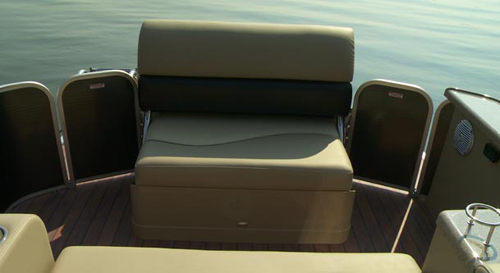 Boarding gates are to either side of the aft couch, both leading to swim platforms to both sides.

While Manitou strived to keep the price within line, she’s still a premium build, and that’s an area it won’t be compromised on. There’s still a level of luxury present, and that, coupled with the kind handling characteristics makes the 25 Encore an attractive package. 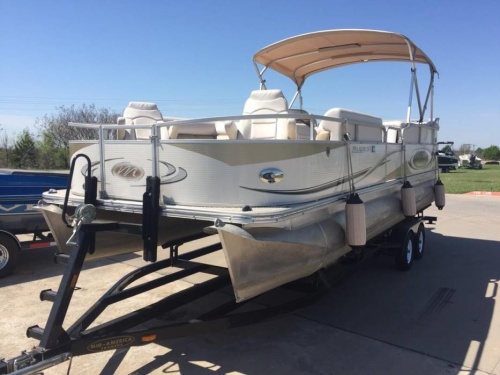 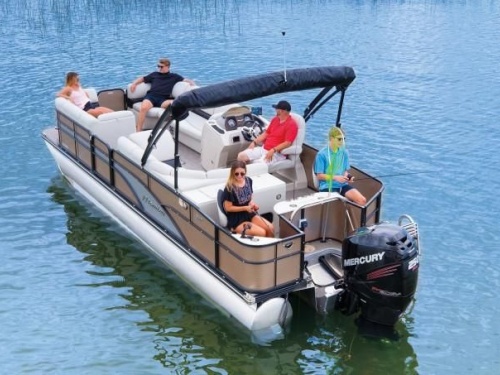 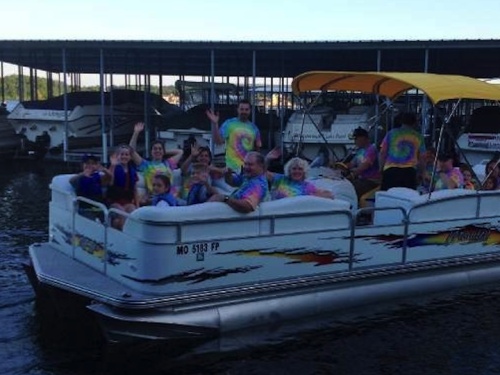