Since 2005 Princess Yachts has been building its nifty 42 (LOA is actually 43'8'') flying-bridge cruiser, an ideal boat for a couple or a small family. Since her launch, the 42 has been one of Princess's most popular models world-wide – but she wasn't sold in the United States. For 2011, things have changed, and the 42 is one of several new-to-America Princesses debuting at this month's Ft. Lauderdale International Boat Show. With two staterooms, two heads, a compact salon and a watersports-friendly cockpit and platform, the Princess 42 will appeal to folks looking for European styling and quality in a mid-sized package.

The guest stateroom has two single berths tucked under the lower helm station; singles make the Princess 42 more appealing for families, since the kids can have separate berths. Both heads have circular stall showers; the port head is ensuite to the master cabin.

A Change of Badges

Until this year, Princess yachts were re-badged as Viking Sport Cruisers for import into the U.S. Beginning with the 2011 model year, yachts built for North America, Central America, and the Caribbean will be branded as Princess, with Viking Sport Cruisers continuing as the sole distributor for these markets. Princess and Viking Sport Cruisers tell us this decision was made with a mutual recognition of the benefits of both companies working together to build a global brand, while acknowledging the foundation of success that Viking Sport Cruisers has created in its approach to world-class support behind the product. 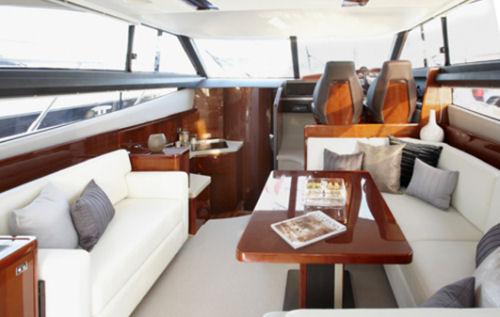 The restyled 42 has redesigned saloon furniture vs. the "old" boat, updated materials and, overall, more functional styling. The boat to be introduced at Ft. Lauderdale will have a walnut interior and ultraleather upholstery.

Princess, home-ported in Plymouth, U.K., is one of the most respected yacht builders in Europe, as Viking is in the U.S., so the marriage was a good one. And it will be still: The change in relationship means very little to boat buyers. Viking will still be servicing and supporting Princess yachts sold in the U.S., just as in the past; the only difference will be the nameplate on the boats. VSC, with a close eye on the American market, suggests to Princess what models should be imported, and brings in a selection to reflect a sampling of the total range of Princesses. This year, Princess and VSC are offering the 42, along with the V52, V62 and 85 Motor Yacht, all four to be shown for the first time at Ft. Lauderdale. (Expect more models to follow in 2011.) 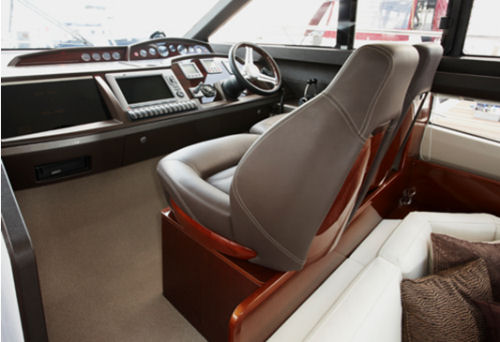 Included in the redesign were the helm seats, now improved to be more comfortable and elegant. We like the two separate seats rather than a single bench, and the clean-but-functional dashboard layout. Big windows make for excellent sight lines.

The 2011 Princess 42 is a revamped version of the "old" 42, basically the same as the previous model but with many styling improvements and modernizations. The builder wanted a more "European-influenced" feel, said a Viking Sport Cruisers spokesperson. The layout was "tweaked" to be more in keeping with Princess's new models, with improvements in furniture design and materials. Some accents have been changed, and there's a new flying-bridge table. Externally, though, the new boat looks almost just like the old one. 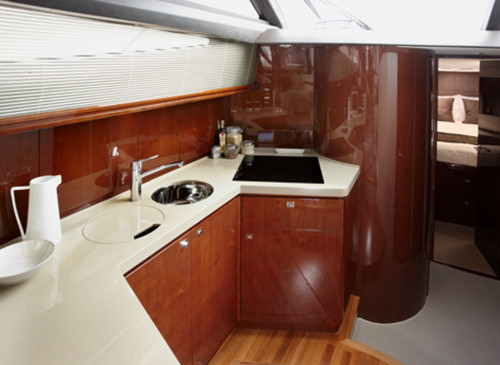 Too many boats this size have so-so galleys, but Princess has designed a nice one for the 42. There's enough counter space, twin sinks, electric stove, microwave oven and under-counter refrigerator. We might even like to cook here.

The Princess 42s that Viking imports to the Colonies include a lot of "standard" equipment not included on the other side of the Atlantic. For example, Princess doesn't include air conditioning – but nobody in the U.S. wants a boat without it, especially not at this price level, so Viking makes it standard. Ditto a genset (11.5-kW), vacuum-flush toilets, 19" TVs in the saloon and stateroom, a heavy-duty rubrail (European boats dock stern-to, and seldom have rails that amount to much), a Simrad VHF and a U.S. electrical system. The boat is delivered upgraded and ready to go. 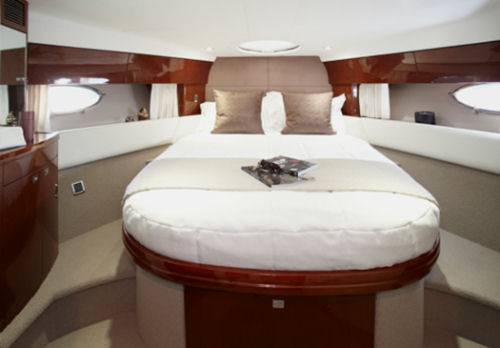 Hullside ports provide both light and fresh air, and we like that the berth is accessible from both sides, not just the foot as is too often the case. Princess sells the 42 without air conditioning in most of the world, but Viking adds it to their standard equipment list for the U.S., along with a TV/DVD and stereo in the stateroom.

Standard power for the Princess 42 is a pair of Caterpillar C7 ACERT diesels, 455-hp each. We haven't tested the boat yet, but the builder claims a top speed of 30-31 knots, cruise of 26-28. There's an oil-change system for engines, gearboxes and generator.
Other systems and equipment include an icemaker in the cockpit; a wetbar, refrigerator and barbeque on the flying bridge; and a Bose 3-2-1 DVD home-theater setup in the saloon, with a 32" TV (a Viking upgrade from the standard 19").
Although built in the U.K., the Princess 42 as imported by Viking meets U.S. Coast Guard regulations and recommendations set forth by the American Boat and Yacht Council, and are certified by the National Marine Manufacturer's Association. Boats built for distribution to other countries don't meet these standards – folks thinking of buying their Princess 42 elsewhere to save a few bucks (the extras Viking adds to the boat also add cost) should consider that.

The flying bridge has lots of seating, a dinette and wetbar. There are twin helm seats, but we wonder if it's awkward getting in and out of the companion, outboard of the skipper's chair? There's a large sunpad with stowage underneath, and another pad forward.

We are told the Princess 42 on display at Ft. Lauderdale will have a retail price of $1,029,280, which includes a full electronics array: dual-station autopilot and Raymarine C120W multifunction navigators at both helm stations, linked to an open-array 48" 4-kW radar scanner. There are also chase tubes for wiring satellite TV. The boat even includes pillows and a complete set of bed linens.
What do we think? This is an expensive boat, but it's targeted at the yachtsman or -woman who wants something special, and has the resources to buy it. Its price is in keeping with other boats of this size, type and quality, especially given its complete equipment list. Whether you add the Princess 42 to your list of possibles depends on how much better-than-necessary construction and European-influenced styling means to you. We like the boat, we like Viking and therefore we think it's worth a close look. 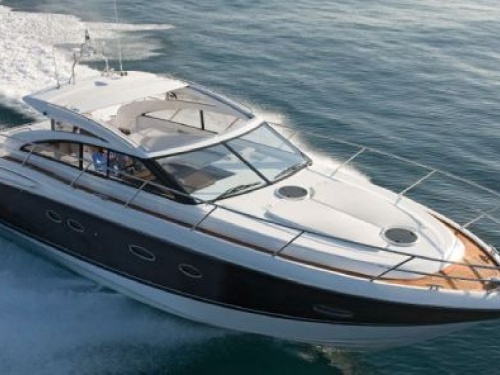 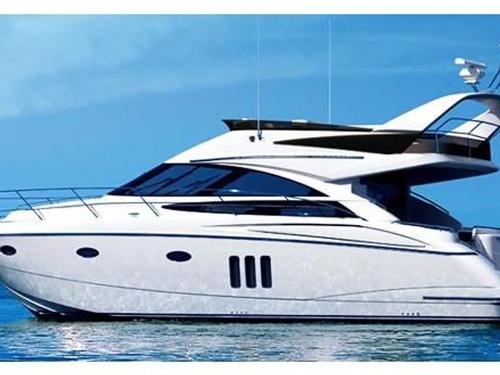 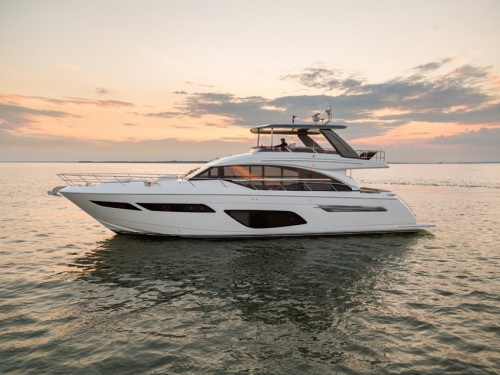 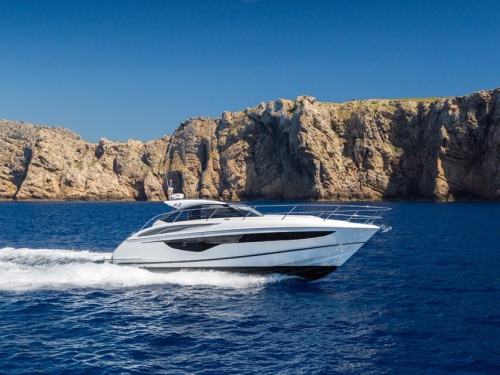