Introduced at the beginning of the 2017 model year, the Ranger Boats VS1782 represents a retooling of the entire Deep V lineup of multi species boats that includes this VS1782 and her bigger sibling, the VS1882. With all aluminum construction and no wood, this tough fishing boat will be ideal for everything from shallow and rocky rivers to choppy open lakes. She even comes packaged with a Road Armor Equipped single axle trailer. 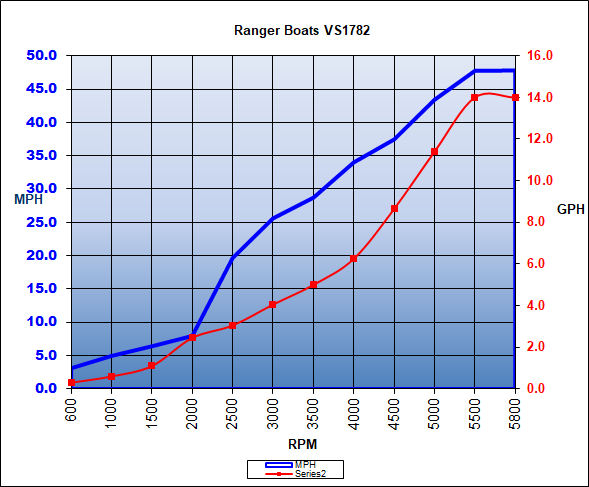 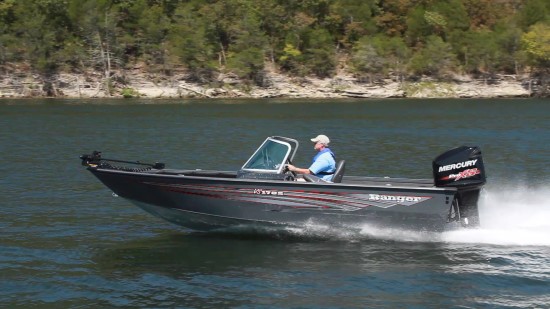 The layout of the Ranger VS1782 is a typical fish boat with a cockpit flanked by two elevated casting decks.

Since its release, the Ranger Boats VS1782 has become the most popular of the four, and indeed the walkthrough configuration overall is in the most demand. She can be ordered as a single or dual console with the high windshield that gives the deep-sided, multi-species boat its characteristic look. And one big aspect of this line, that the company is particularly proud of, is the zero-wood construction. 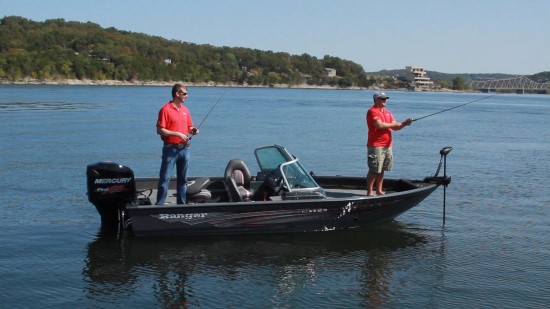 The Ranger Boats VS1782 can hold up to six, but for two guys fishing it’s just the right size.

With any fishing boat, the bow is going to be the place where most of the action happens. Here there’s plenty of room for two anglers to work alongside each other with the space measuring 6’4” (1.93 m) wide x 7’10” (2.39 m) fore and aft. A receiver is in the center of the deck to accommodate a pedestal seat. Optional cargo netting lines the space under the gunwales making for a clever use of space for storage. Two dry storage compartments are under the deck, one to each side and the starboard side also shares space with one of the boat’s two livewells. 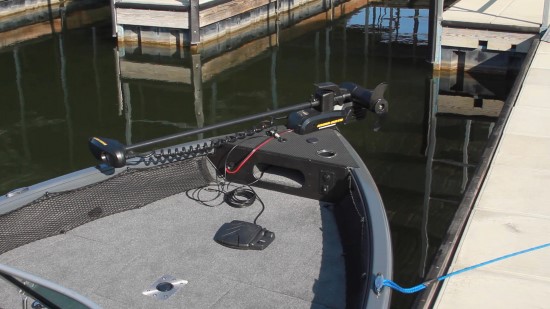 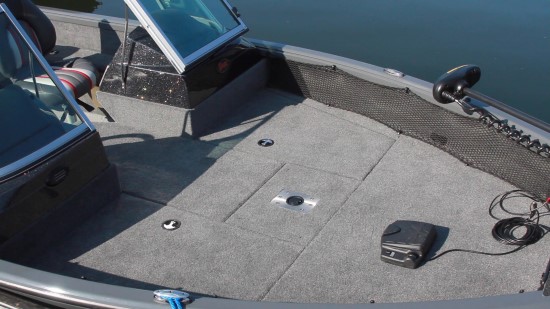 The forward casting deck has storage compartments and a base for the removable pedestal seat. Notice the cargo net storage under the caprail. 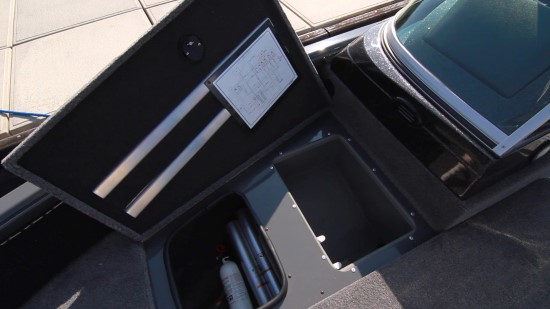 To starboard there is dry storage and a livewell. Notice the electrical schematic under the reinforced hatch. 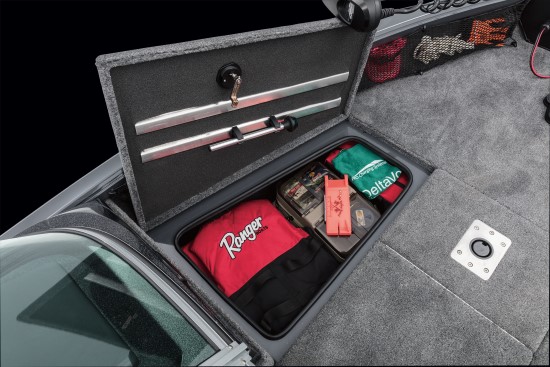 The portside compartment is all dry storage.

Now, as we look around, there are no rod holders, and only a few drink holders. Instead, Ranger integrated a track system running along the inside of the powder-coated caprail surrounding the boat. This can accommodate a wealth of accessories suited to each individual owner. We’ve seen everything from the basics mentioned here, on up to downrigger mounts to kite holders, and fishfinders to phone mounts. So it makes sense to leave out the fluff and let the owner decide what to add, and where to add it. 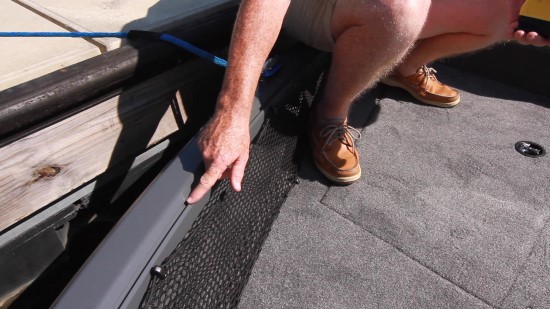 An integrated track system holds a multitude of accessories. 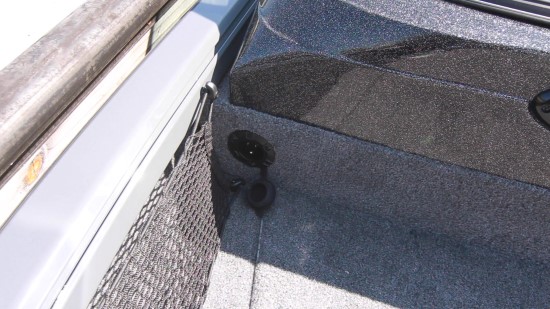 Just ahead of the helm console is a plug for connecting the battery charger to 110v power.

At the walkthrough, there’s a large, lockable center rod box that runs 7'6" (2.29 m). We measured 23” (58.4 cm) between the high windshields and of course the center windshield closes off for added protection from wind and rain. 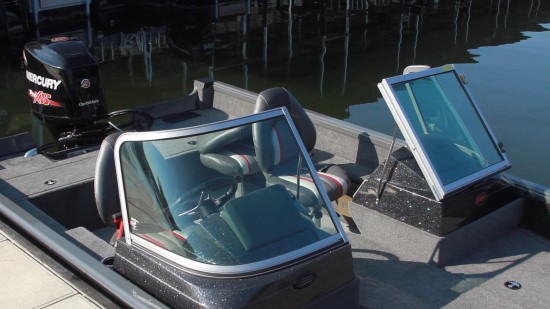 The high windshield is the spotters cue for any quality multi-species fishing boat. 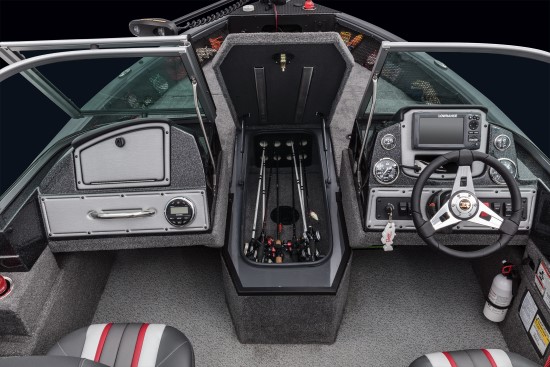 The heritage that Ranger has with building fiberglass boats is carried over here with the consoles. They have the same sparkle highlights that we see in the bass boats, and being fiberglass, they have the strength to resist flexing and twisting as pressure is put on the wheel or if we lean against them. 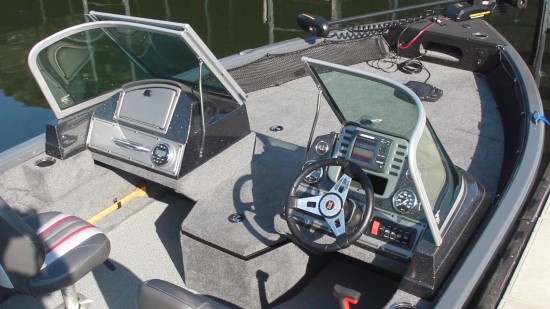 The fiberglass consoles are made in-house and have the telltale Ranger sparkle added in.

The helm console is well outfitted with a flush-mounted Lowrance Hook 5 fishfinder. Analog gauges are to both sides and a convenient storage cubby is right in the middle. The steering is hydraulic and the wheel is mounted to a tilt base. To either side of the wheel are rocker switches and we’re happy to see that the horn stands out nicely in red.

The port console has lockable glove storage and the control for the Kicker stereo. 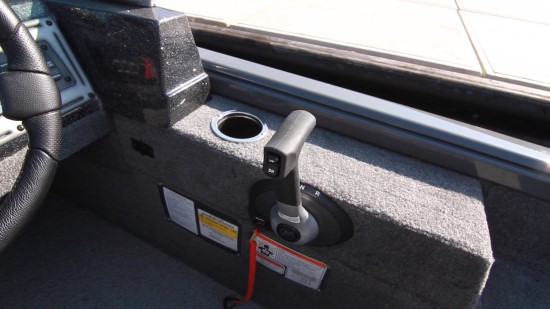 To the right side, there is a protruding and carpeted armrest with the engine control mounted to the inside. Just ahead is a beverage holder. 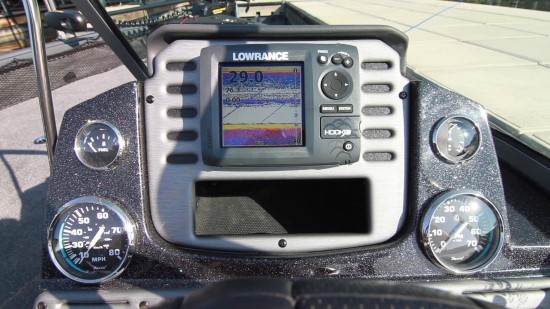 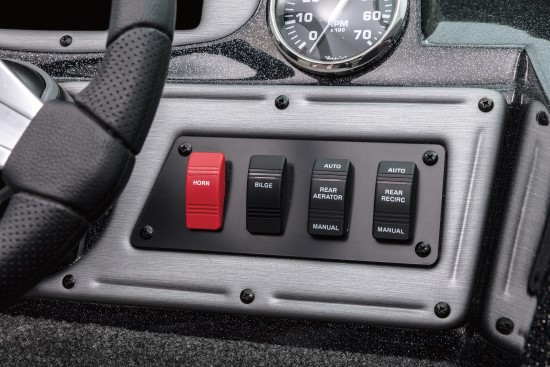 Among the rocker switches is the easy to find horn switch.

The seats include premium upholstery and, like the consoles, are built in-house. With Ranger building not only the boat, but the components as well, it means that the company can better stand behind the product and service all of it and better satisfy the needs of the customer. Of course it also means that it can keep a better rein on quality control. The third seat can be relocated to either the forward or aft casting deck. Or for that matter, left in the garage. The driver’s seat has swivel and slide capabilities.

We measured 23” (58.4 cm) of cockpit depth for safety. The vinyl decking is a nice touch over the carpeted decks we’ve seen on competing brands. This sheds water much better and has a better non-skid factor with its raised treatments.

In the center of the two console seats is another hatch that opens to reveal the two trolling batteries. This speaks of the clever weight distribution Ranger utilizes. Rather than pile all the weight at the stern, this makes for a more level boat both at rest and underway. These, along with the fuel tank just behind, are mounted further ahead and on the centerline. More to the point, however, is that none of these components are crammed into position, and all, save for the fuel tank, are easily accessible and serviceable.

Notice the battery compartment in the center of the deck, just ahead of the fuel tank. This keeps the weight centered better both laterally and longitudinally. 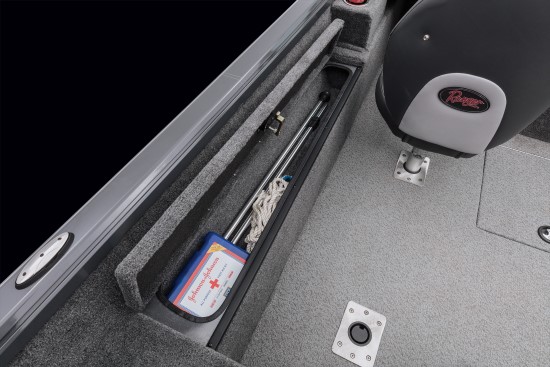 Storage is to both sides of the cockpit. To port the compartment serves as lockable storage.

At the stern is another elevated casting deck and to port is a covered livewell that is aerated and includes a divider. To starboard is the cranking battery, oil reservoir, trolling motor breaker, and a bait bucket in a recessed holder. 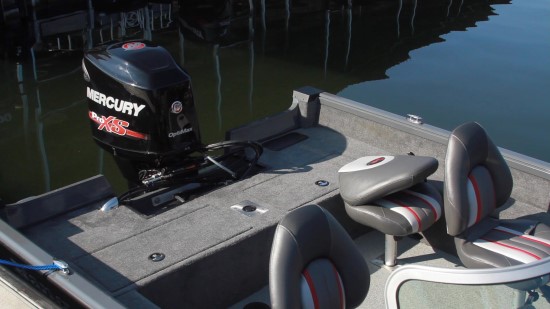 The aft casting deck has a pedestal base to accommodate the removable seat in the cockpit. 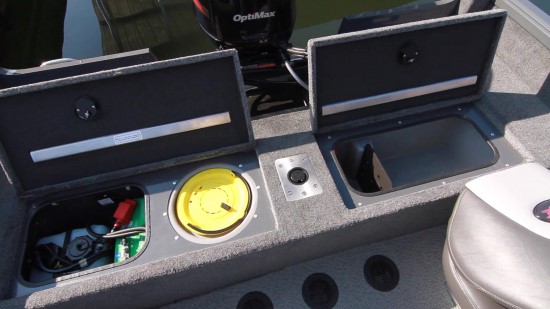 Under the aft deck hatches we can see the divided livewell, a bait bucket in a dedicated holder, the crank battery and outboard oil reservoir.

The Ranger Boats VS1782 is offered with power from either Mercury, Evinrude or Yamaha. 150-hp is the rated maximum.

We reached that planing speed in 3.0 seconds, accelerated to 20 mph in 4.9 seconds, and continued through 30 mph in 6.7 seconds.

This light boat feels like a much heavier boat on the water and that’s due to her solid feel. She has sport handling characteristics and is quick to respond to the helm. Hit the throttle, get her up on plane and bring that trim up. You want a bass boat like rooster tail, and off she’ll go. But unlike a bass boat, she stays more stable when crossing wakes and there’s no need to reduce speed. She rolls nicely into turns and shows just a touch of chine walk when held over hard. The high windshield was appreciated and it deflects wind nicely at speed.

The Ranger Boats VS 1782’s aluminum construction provides many benefits. It’s light and easy to trailer, but more to the point, it’s durable. The boat can easily be dragged onto a rocky Canada beach. It’s also appealing to the customer fishing in dicey river systems or anyplace where it gets shallow or there are pop-up sandbars. It has a lot of fishability features of a big boat, all nicely packaged in a smaller, easy to manage boat.

It’s equally appealing to the entry-level guy making his first boat purchase as it is to the seasoned guy who has a larger boat and needs to accommodate the small lake behind his house.

And lastly, this boat comes packaged with a custom built trailer. No surprises there as Ranger has long been an advocate for selling boats that are virtually “water-ready”. Options exactly that… optional. There’s nothing optional on this boat that is necessary, and that’s an attitude that other companies just can’t seem to wrap their marketing around. There tends to be more of a mindset in the industry of pricing boats low and upselling the necessities at closing time. Ranger is the exception to that rule.

This standard trailer is a C-Channel trailer with Road Armor protection to prevent rust and corrosion. 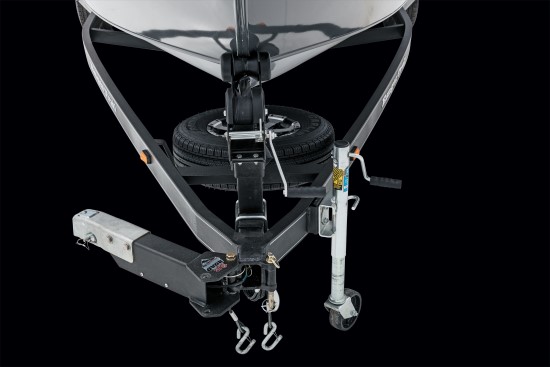 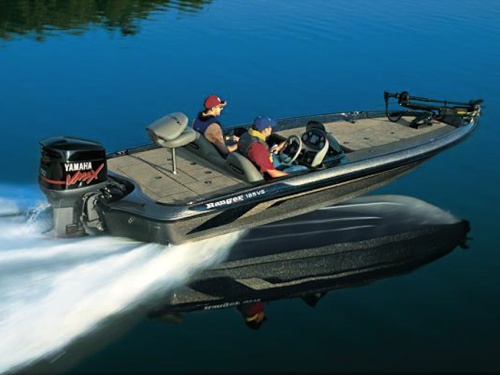 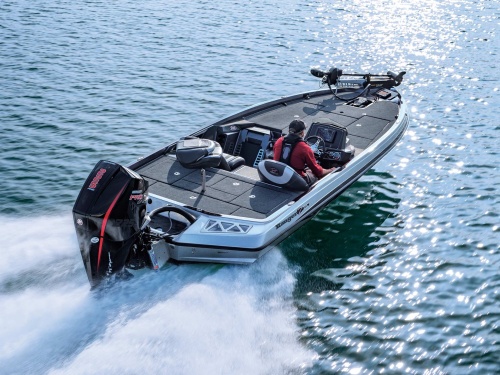 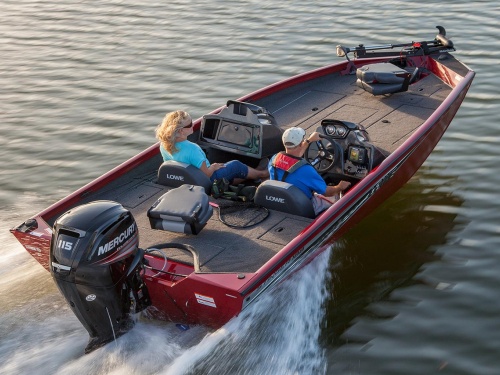 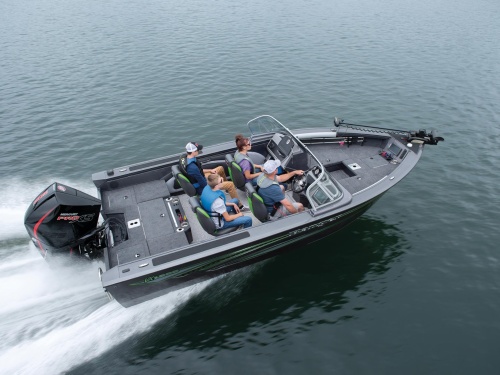