The Fish Pro is the first specialized fishing personal watercraft produced by Sea-Doo. The craft comes with a long list of standard features that include navigation, charting and fish-finding capabilities as well as a trolling mode and a cooler that doubles as a workstation. 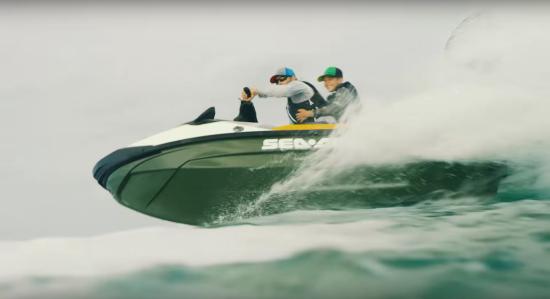 The Fish Pro is the only Sea-Doo craft standard equipped with an 18.5-gallon fuel cell. The standard STX hull has 15-gallon capacity.

The Fish Pro is a contender for those looking for an alternative to paddling out in a kayak or something cheaper than a fully outfitted aluminum fishing boat. Sea-Doo took its GTX 155 PWC and added fishing specific amenities and modifications to make the Fish Pro capable of extended trips and able to handle rough waters. This watercraft is comfortable, stable and an efficient workspace for fishing. 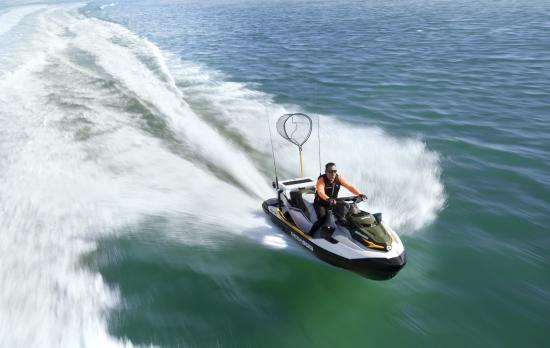 The low-slung top deck keeps the center of gravity low, and the craft is less likely to feel top heavy. 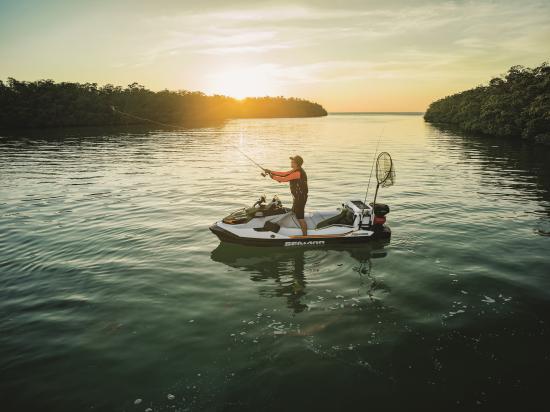 The Fish Pro is very stable on still waters.

Sea-Doo designed the ST3 hull to handle well in rough conditions. The deep-V on the Fish Pro softens the ride as it cuts through the waves, rather than bouncing atop them while the extended running surface contributes to the craft’s ability to track better. The hull is also built wide and short, taking advantage of a relatively low center of gravity, which increases stability while cornering and while walking around the craft. 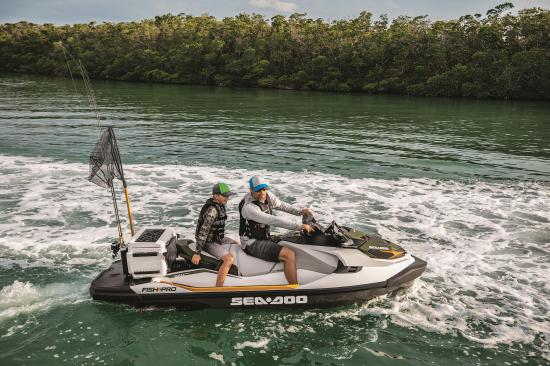 The seat is modular and the aft section is completely removable.

The Fish Pro is powered by one 4-stroke, three-cylinder Rotax 1503 naturally aspirated engine. It generates 155-horse power, displaces 1,494 ccs and incorporates a closed loop cooling system to keep out salt water and debris.

The vessel has Sea-Doo’s Intelligent Throttle Control (iTC), which gives the driver control over the jet propulsion. With this system, the Fish Pro starts with the engine automatically in neutral without immediately propelling the craft forward. Drivers are able to manually control the impellers and reverse gates, or to choose from pre-set modes, which automatically correct for fuel efficiency and speed. 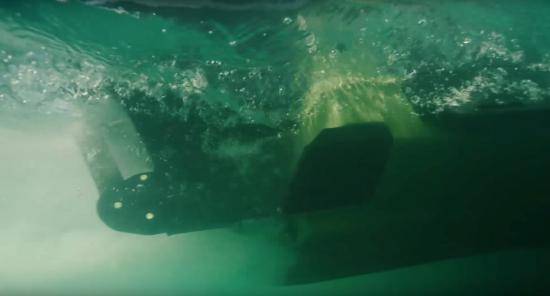 The Fish Pro also has the D-Sea–Bel system, which uses a series of resonators and vibration absorbing components that reduce sound emissions.

The display is also used to monitor and control the Variable Trim System (VTS), which allows the operator to adjust the angle of the nozzle, allowing the vessel to ride parallel to the water and adjust for weight distributions. 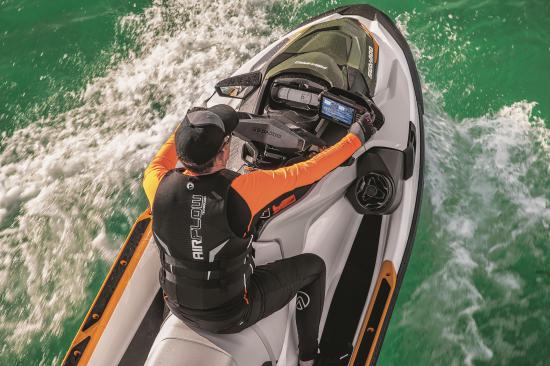 The digital dash is set above the handlebars. To the right is the Garmin fishfinder. 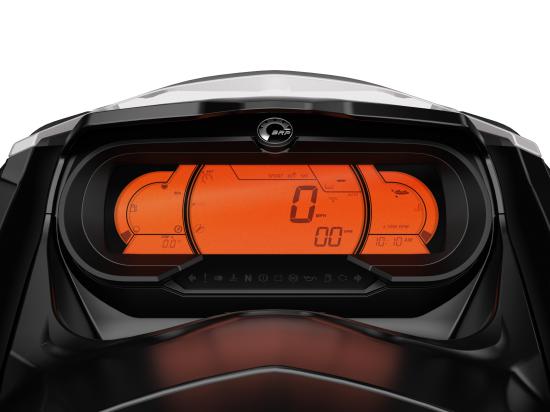 The LCD display is amber lit, which is easier to read in daylight. The digital display will also show the settings for Trolling Mode.

A watertight, impact-absorbing phone box hangs just below the handlebars, and there is also an option to install a USB port ($109.99) for charging convenience. The driver can also lift the handlebars to access the 27-gallon central cargo compartment, which comes with a bin organizer. Sea-Doo designed this feature so that operators can access this space from a seated position, which is an improvement from standing up and leaning over the handlebars, although it does result in a reduction of storage space. 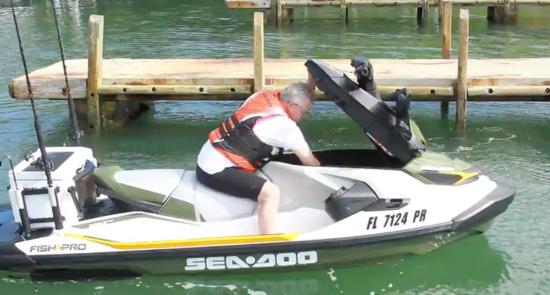 A storage bin is included in the central storage compartment.

In addition to the iTC modes for touring, sport and eco, the Fish Pro has an additional Trolling Mode. Similar to a no-wake or slow speed mode, which allows operators to control speed in half-mile and full mile per hour increments up to 9 miles per hour.

Operators press the cruise control button when in forward and adjust the speed by pressing the corresponding arrows on the handlebar. This control allows operators to keep the vessel moving hands free, so that they can turn and cast lines or reel in a catch.

While the right hand controls the throttle, the left controls the Intelligent Braking and Reverse (iBR). Squeezing the left trigger will lower the reverse bucket behind the exhaust duct to redirect the flow forward, putting the watercraft into reverse. This feature is useful for docking, avoiding obstacles or backing off beaches. Sea-Doo reports that this system allows riders to stop up to 160’ (49 m) sooner than watercraft not using a brake. 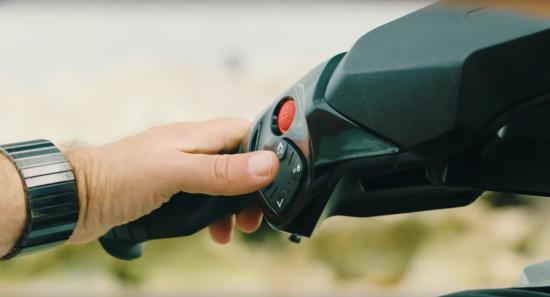 The left handlebar has the start button, and below are panel button controls for the sport and eco modes and arrows to interact with the digital dash.

Sea-Doo has added a selection of fishing specific features to the Fish Pro. These include a water temperature gauge, which is shown on the digital display, and allows the operator to identify ideal fishing conditions while underway.

Positioned just behind the bench seat is the LinQ Fishing Cooler, which has a 13.5-gallon (51 L) capacity. The cooler attaches to the deck of the Fish Pro via the LinQ system and features a recessed work surface, storage net, multiple options for vertical and angle mounting positions, trolling slots, tackle and bait storage. It comes with four rod holders, with the option to purchase more. 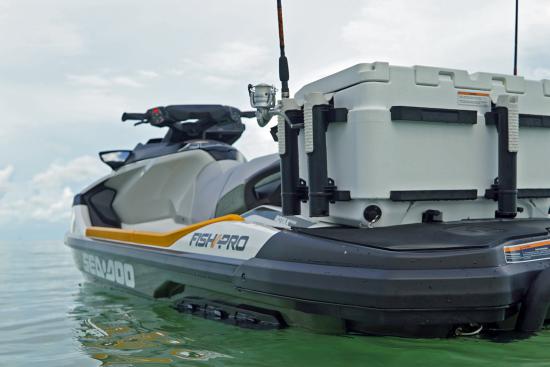 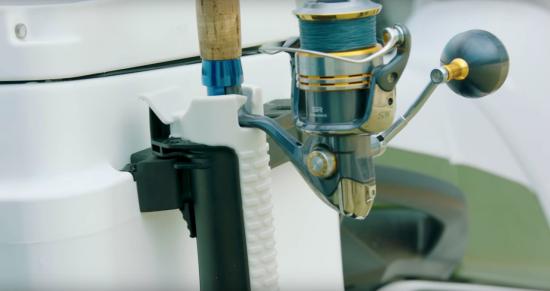 Close up look at the rod holders. A rubber cap keeps the rod in place. 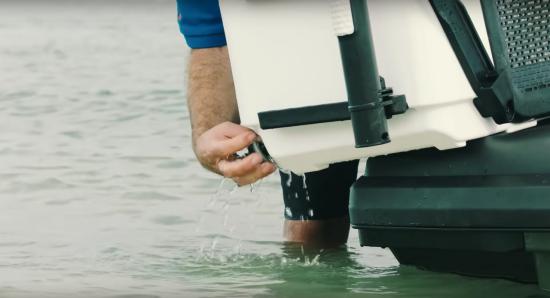 A pair of drains on the cooler makes it easy to empty.

The Garmin ECHOMAP Plus 62 CV fishfinder, which is mounted on a bracket attached to the right-hand mirror pod, shows charts, depth, course heading and the seafloor on a full color 6’’ screen. The Garmin uses CHIRP technology to produce live view, high definition images in conjunction with the standard in-hull transducer. 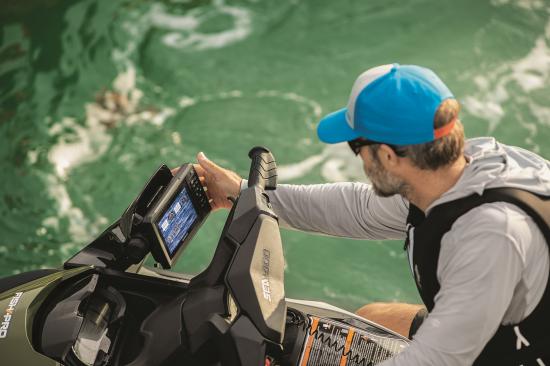 The Garmin EchoMap is hardwired to the battery and the in-hull transducer.

The bench, which can seat three, is designed so that the driver can comfortably maneuver to lateral and rear facing positions, while the angled side footwells, which have non-skid padding up the side of the gunwales, are deep and wide for comfort and stability. 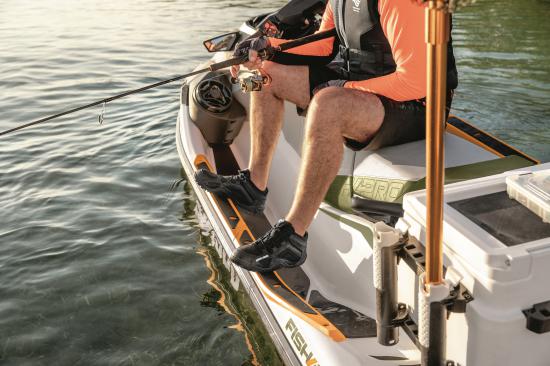 The seat has been redesigned to be flatter so that it is easier to move fore and aft. The angled gunwales and deep footwells keep the driver secure while moving around the craft or fishing off the side. 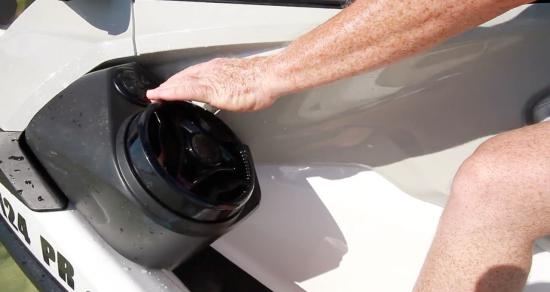 Speaker pods for the optional Bluetooth BRP Audio Premium sound system are set into the footwells and can be controlled by a control pad above the left speaker.

For the Fish Pro, Sea-Doo also added an 11.5’’ deck extension. It has a re-boarding ladder and a second LinQ attachment set. This deck can be used as a casting platform, a watersports prepping area or as a storage space for additional gear such as a second cooler or a spare gas can. 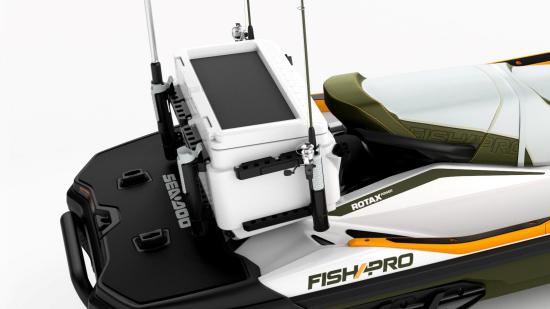 The deck extension adds more buoyancy to support the added weight of the cooler. Note the re-boarding ladder and LinQ attachment points, which can be pushed down flat against the deck when not in use. 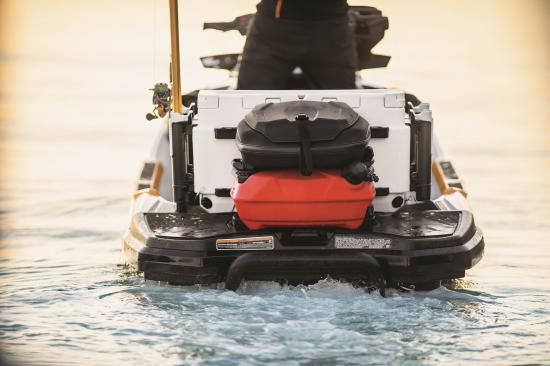 The LinQ System is Sea-Doo’s proprietary quick-latch accessory technology. Sea-Doo has a 4-gallon fuel caddy, a 5.5-gallon storage bag, ski-pylon and a cooler that is compatible with the system. The Fish Pro has two sets of attachment points.

The Fish Pro’s ST3 hull is built to handle reasonable chop. The deep-vee has similar characteristics to Sea-Doo’s RXP racing T3 hull, with a 22-degree deadrise and a sharp angle from the keel line up to the midline. This makes the ride more controllable while the craft cuts through waves and helps to keeps the Fish Pro stable in heavy-handed steering.

While the T3 hull featured a soft chine, the ST3 uses a hard chine to minimize pitching, and Sea-Doo re-profiled the strakes for straight tracking and steady control under high speeds. Midway starts a second, offset chine which adds approximately an inch of width to the vessel and enhances stability both at rest and at high speeds. 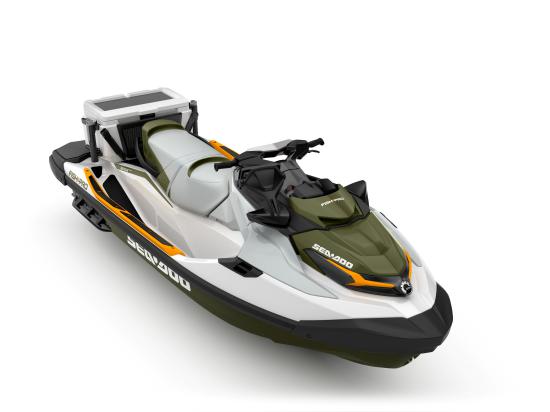 The ST3 Hull is an inch wider than the previous hull generation, increasing the stability at rest. Passengers can be confident that the craft is unlikely to tip over if the first, second or even a third person stands or moves around.

The Fish Pro comes with the Digitally Encoded Security System (D.E.S.S.) anti-theft system. Each key communicates with the watercraft via a wireless, radio frequency chip. Without the key, the craft will not start.

The optional custom trailer has a galvanized frame with adjustable carpeted bunks and sealed wheel bearings. The base model starts at $939.

BRP Limited warranty covers the watercraft for one year.

The standard equipment on the Fish Pro is more than enough to get out on the water. But some options to consider include wind deflectors for the handlebars ($99.99), the ergolock knee pads ($129.99) and the Ski and X package ($149.99), which adds ski mode and the display will show average and top speeds.

There is nothing else quite like the Fish Pro out in the market currently. The ST3 hull is an excellent choice for a fishing-specific vessel, with its stability and ability to handle rough conditions. The choices that Sea-Doo made to modify the ST3 hull for this particular model result in an even more stable watercraft with more useable space. 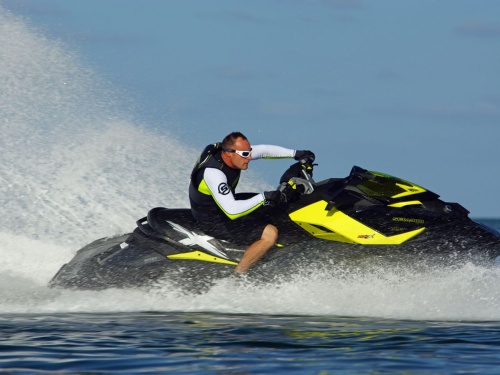 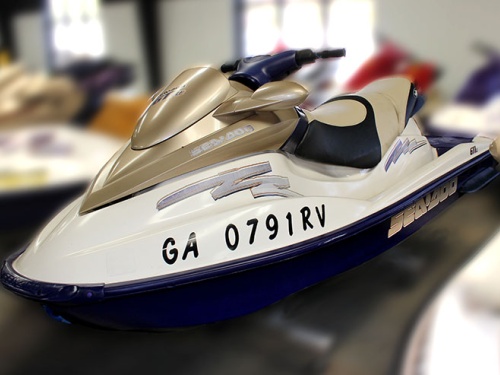 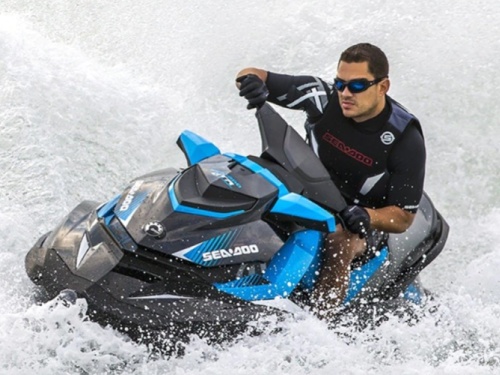 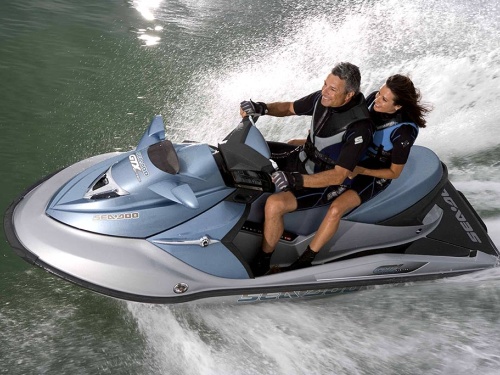