These hand polished stainless-steel anchors are not only functional, but certainly add to the class factor of our boats. And really, if the anchor is going to be on permanent display, do you want to see this, or an ugly galvanized model? Kind of a no-brainer, but anchors aren’t just about looks, so let’s look at the features and see how this anchor does its job.

Anchors have been around for thousands of years and the quest for the perfect anchor is one of every boater’s life-long quests. Popular anchors come and go, but the ULTRA anchor is one that we think is going to stay around for a long while. 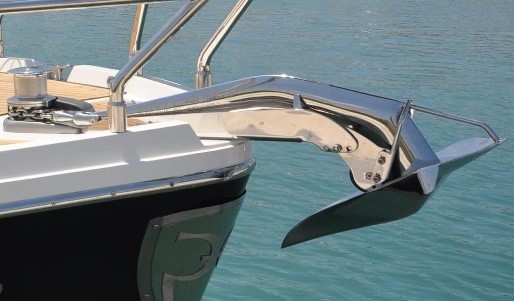 The ULTRA anchor is a one-piece polished stainless-steel unit.

First, its geometry makes it applicable whether used thru-the-stem, integrated into a pulpit, or as part of a standard roller setup. They run from 5 to 360 kg (11-800 lbs.) and the weight detail is stamped right into the shank, along with the serial number.

The eye is reinforced to prevent bending or breaking. ULTRA Marine tells us that the shank is 3 1/18” LN duplex stainless-steel and is likely the strongest anchor on the market. The entire shank is hollow – allowing weight to be concentrated on the lead filled tip, so it never lands upside down. The tip always falls into attack position. This is one key to its effectiveness. 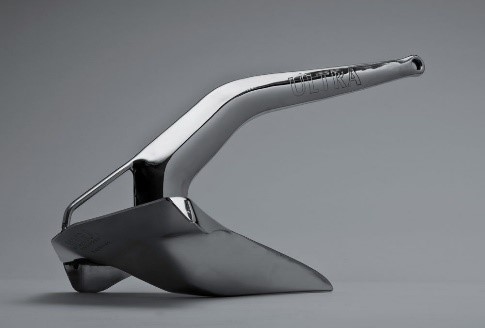 The ULTRA Anchor’s weight distribution efficiency along with the curved tip at the bottom makes it ideal for grabbing ground material while the eye is facing upward towards the vessel.

That tip is curved so it digs in and stays set even when rotating from a tide swing, thanks to the side swing plates that prevent the ULTRA Anchor from being pulled sideways. It is simply pulled out because it is one piece, and sets again. The angles allow it to set, even if it lands against a rock. The concave base has the appearance of a shovel and it has a greater surface area than some conventional anchors.

Our favorite feature has to be the clever anti-foul bar. This ensures that the chain simply cannot wrap around the shank and it provides the ability to attach a trip line. Plus, it makes the anchor easier to carry because it is heavy. 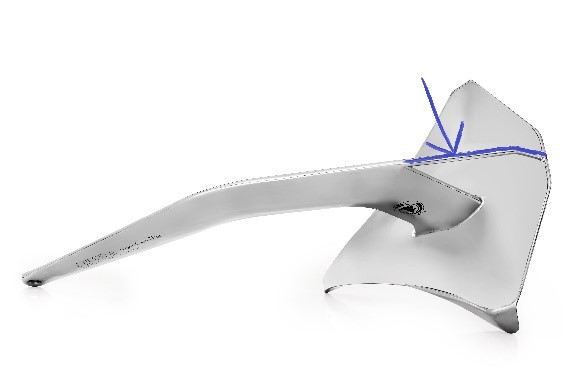 Anti-Fowler Bar – This little handle extending from the shank ensures that no chain gets wrapped around, and it makes for easier and safer carrying since the weight is where the bottom tip is.

ULTRA Marine also makes its own swivels and they are extraordinary. It connects the chain and the anchor without the need for shackles. It allows a 30-degree rotation and 360-degree swivel, so it can recover the anchor right-side up, and allows the anchor to enter the roller correctly every time. 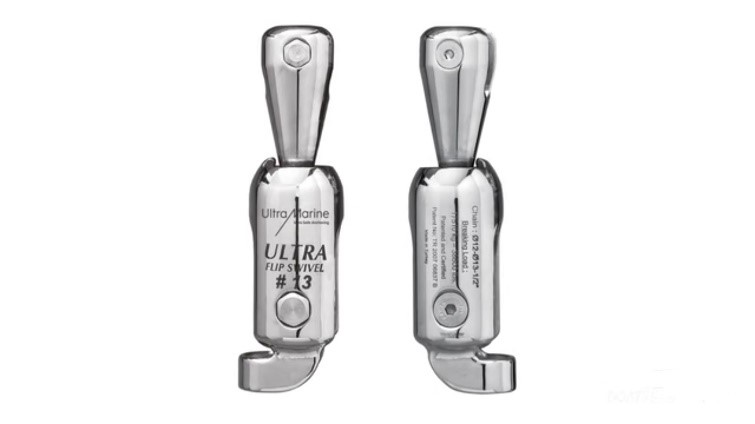 Swivels – ULTRA Marine makes these swivels that form the perfect combination of ground tackle for a boat.

So, in action, the ULTRA Anchor lands in the correct position every time. Put about a 45-degree angle on the rode from the roller and then put a strain on it. The ULTRA Anchor digs in and holds in minimal distance, usually within its own length. The more pull, the more it digs in. 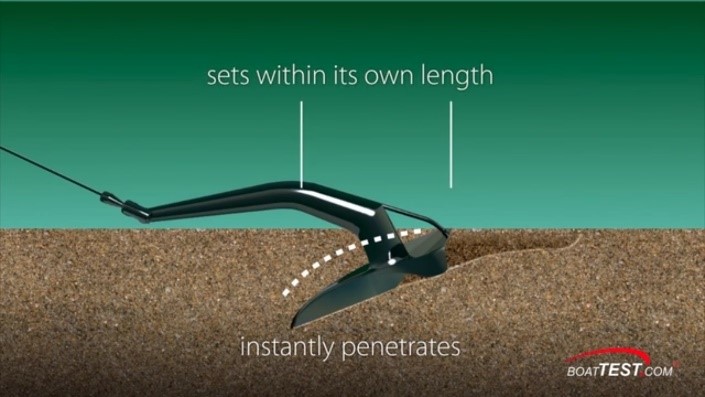 Anchor Digs In – The ULTRA Anchor gets its holding power from its ability to dig into the bottom and hold, even when being rotated due to a tidal swing.

Even when the ULTRA Anchor lands on its side, it still returns to attack position and holds. Recovery works in the traditional way – drive over the anchor, add a strain and up she comes.

These hand polished stainless-steel anchors are not only functional, but certainly add to the class factor of our boats. If the anchor is going to be on permanent display, the ULTRA anchor will make its owner proud.

Anchoring can be a difficult job for some people, but having the right tool makes the job easier. In our experience, the ULTRA Anchor presents an addition to any boat’s ground tackle that eases the job and makes everyone look like a professional.

ULTRA Marine stands behind its anchor with a lifetime warranty against failure – the swivel is warrantied for five years. Couple that security with performance and good looks and it’s easy to see why we’re seeing these anchors on more and more boats.

One of BoatTEST’s staffers used an ULTRA anchor in Alaskan sand, mud, and rocks, and found that it set immediately in all three of these conditions. BoatTEST recommends this anchor.