It’s always interesting to compare boats, especially if they come from opposing sides of the “pond”. This week, we take a peek at Europe Marine’s slick express cruiser, the Viper V303, which is made in Germany. Europe Marine is a large German marine marketing firm located in Budenheim, near the Rhein River south of Frankfurt. Aside from her sleek lines, we like the fact that the V303 has lots of wood and exceptional stowage space below, and its engine option list is 25 choices long, twin and single. Half of the options are diesels, including three VW diesels connected to Bravo III stern drives. Does this portend America’s future? 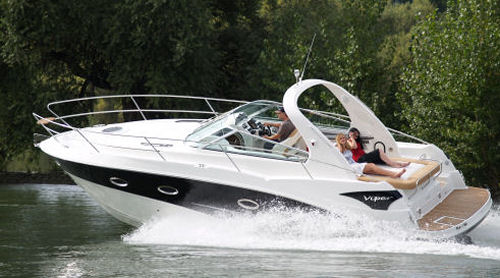 We like the Viper V303 in that they do the layout a little differently than it would be in the U.S.

I’m thrilled to see that Euro builders are making boats look more like boats. This Europe Marine Viper V303 is very similar to several boats on the market, at least externally. Internally, there are some distinct differences, and I think better differences that set this boat apart from the pack. It makes for an elegant couples weekender that has comfort, style, and eye appeal. And I suppose if I had to, I could manage to share this boat with another couple, if they brought food.

The helm if functional but it’s lacking in glare protection. The dash and gauges are angled back to face the driver, but no glare shield above, and anti reflective backing would also help. As it is, everything is mounted against bright white gel coat. A navigation display lies front and center, switches are grouped to either side of the panel, accessories and equipment to one side, lighting and courtesy to the other. I’d like to see the engine controls mounted horizontally. Having an even swing from forward to reverse feels so much more natural than having to re-position my hand when backing down. Sometimes it’s necessary to angle them, not here. 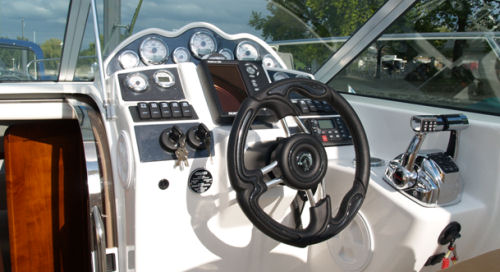 There is room for a chartplottter in the center, below the dials. Note slightly canted throttle controls.

I very much like the dinette and table to port of the helm. Being near the operator is paramount to a good time on the boat, and the more people that can do it, the better. That said, once in a while, you’ll just have one person there. That person needs the choice of sitting facing forward or aft. 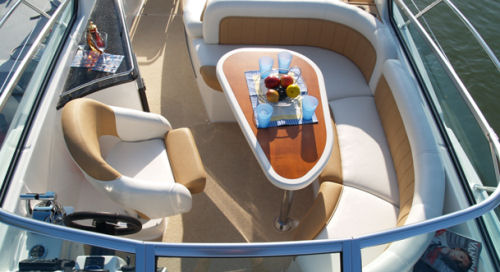 We like the rounded settee and contoured table. A navigator will likely stand in the companionway well.

Here’s an interesting feature. On top of the engines lies a sun lounge big enough to hold a party. We’ve seen this before, but the difference with this version, is underneath. Hinged from the port side, and lifting from the walkthrough side, reveals a large storage area. It’s finished inside and cavernous enough to hold just about anything, particularly your wet gear. The lounge has a head rest, and stainless steel rails in all the right places, and does double duty as grab rails for the swim platform. And thank you for making the reboarding ladder four steps. Too many builders only use three, and it’s not enough. I also like that there’s a door that closes off the walkthrough for safety. 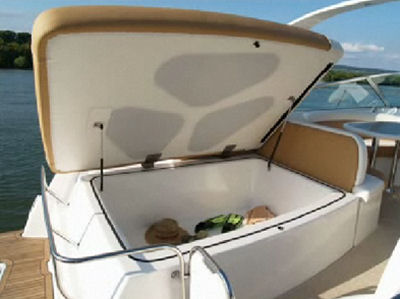 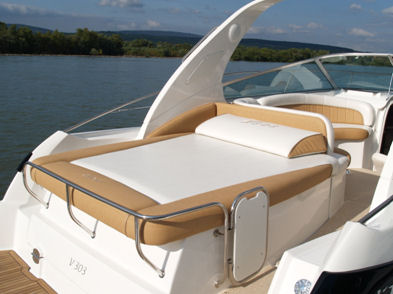 Moving below, and we have a very comfortable space. There’s the normal V-seating forward that converts to a berth. And check out the storage overhead. Normally we see either storage, or portlights, not both as we do here. Very nice touch. The modest galley lies to port and notice how there are no covers over the sink or stove, that have to find a home when either of these items gets used. And I’m thrilled to see fiddles around the counter. All cabinet doors are latching, and with 5 portlights, the area is swimming in natural light. But that’s not much help at night. No worries though, the Viper 303 has no less that 14 cabin lights. 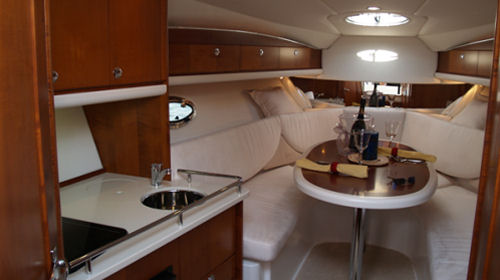 Please note the stainless steel fiddles on the galley counter which look good, keep things from sliding onto the soul, and even provide something to grab in a sea way.

The head is modest, but it doesn’t need to be more than what it is. It’s a wet head, so no separate shower stall. One complaint, what’s up with that T-handle next to the commode? Am I actually supposed to pump that handle up and down to flush? I don’t think so. That may work on a smaller bowrider or a sailboat, but here, that sort of thing won’t wash... so to speak. This boat has an electrical system... use it. 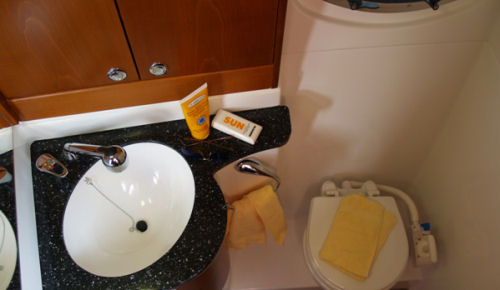 There are a lot of well done details visible here: note the opening portlight, positive latch push-pulls on both cabinets, and the teak grate on the sole for the wet head shower. Capt. Steve takes umbrage at the old-fashioned pump-out head.

Now here’s something we like. The double berths in the mid cabin. And clearly there’s an option for opening up the dividing cushion to make a double. Now if this were a boat for one couple, this would make a great spot to sleep, and then wake up and walk over to the table. Of course, you may have people sleeping there if you’re popular, but for two people, what a scenario. 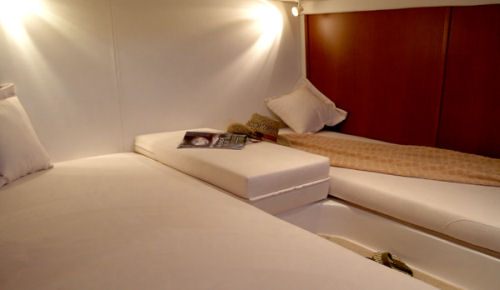 Mid cabins on 30’ boats are a struggle, but the Viper V303, has as nice of one as we’ve seen on most any boat in class.

Well there’s no shortage of options to power your Viper V303. Twenty-five to be precise, with both single and twin applications to choose from. And, as this is a European built boat, the choices are also steep in the diesel range. Topping off with twin 320 HP, you’ll be hard pressed to find a speed that can’t be achieved while still maintaining a semblance of a comfort level.