Yamaha unveiled its newest sportboat model at the Miami Boat Show this past February and it immediately wowed the attendees present. The 190 FSH Sport represents a clear departure from the previous models and signals Yamaha’s commitment to innovation. She’s a center console jet boat that has features appealing to both fishermen and families alike. We got a chance to conduct a full sea trial and our full video is ready for viewing. 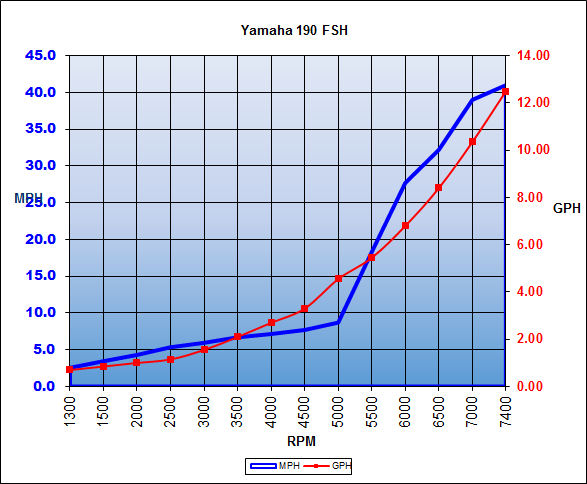 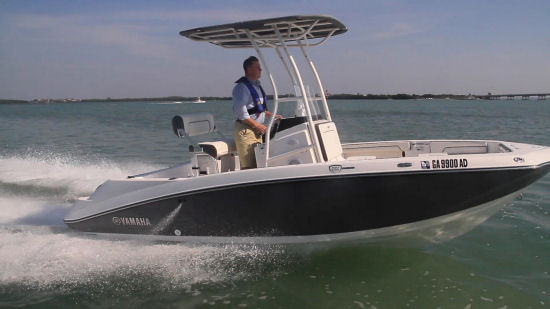 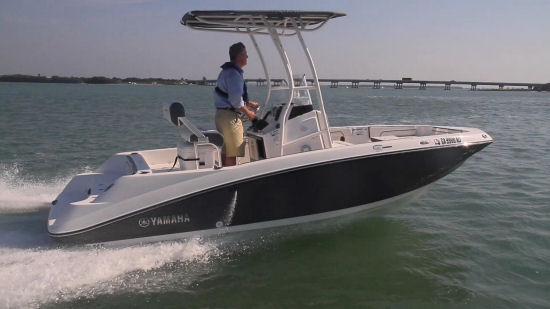 Top speed during our test was 41 mph.

We love when a company keeps innovating, and Yamaha has done just that with the first of a series of center console jet boats. The 190 FSH is available in three different versions, and in true Yamaha fashion, the main differences are in the amenities each includes. Choose from the basic FSH, the Deluxe version with added features that include a bow pedestal seat and Bimini top, or the FSH Sport that even includes a standard T-top.

The center console layout offers plenty of walk around room for everything from fishing to family fun. 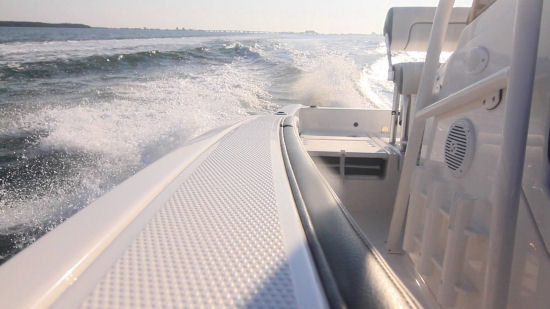 Boarding the 190 FSH Sport is made safer with the addition of the non-skid surface on the wide caprails.

We’ll Start Our Look at the Operational Features with a Tour of the Helm.

The stainless steel wheel is mounted to a tilt base. The throttle is mounted at approximately a 30-degree angle. All switches are kept close at hand and well organized. There's open space to the right panel for mounting electronics, and below the stereo is a recessed area for putting quick drop items. Additionally, at the top of the console is a raised lip for holding items in position and to the right is a removable organizer. 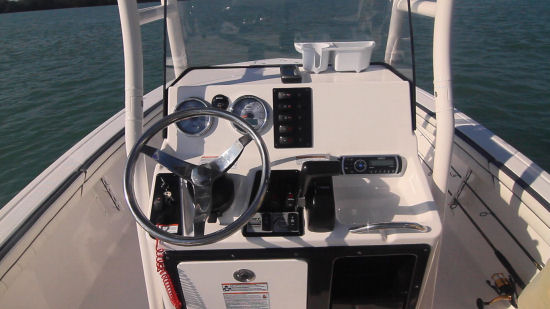 The helm is well laid out with plenty of space for holding loose items. A space in the panel can accommodate flush or pedestal mounting of an after-market electronics display.

The ignition is located high, well above the knee strike zone. Below is a lockable storage compartment with good capacity for holding a large amount of items. An open storage space is just to the right. Down at the bottom of the console, Yamaha included a footwell to allow a bit more comfort to the operation.
Of course visibility is hardly a concern but we would like to see the windshield be raised a little bit more so that it does a better job of blocking the wind.

With shade being a valuable commodity on the water, everyone will appreciate the standard T-top over the console. This top is also collapsible to allow for easy storage of the boat in a garage or rack room. The windshield can easily be removed to allow the top to lay all the way down to the top of the console.

At the bow, Yamaha included an anchor locker so we don’t have to impinge on the under-seat storage for holding this important item. A pull-up cleat at the bow will secure the rode. 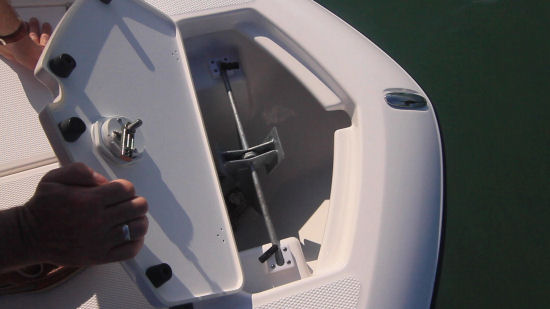 The anchor locker includes a keeper to hold the ground tackle in place. 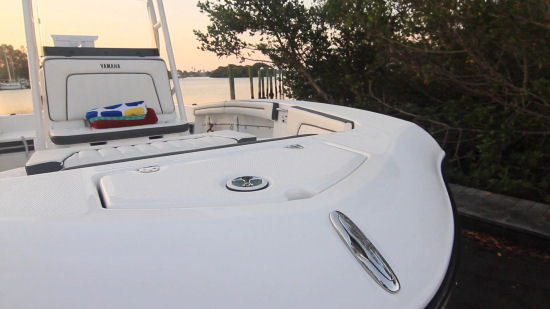 A forward cleat can be used to secure the anchor rode. Being so far forward on the bow eliminates any chafing of the gel from a taut line.

At the stern, there’s a hatch in the swim platform that provides access to a cleanout port. This allows clearing of the jet intake should the boat be operated in weeds, or over a plastic bag that a careless boater tossed overboard. When the hatch is lifted, a cut-off switch in the forward right hand corner kills power to the engine, keeping this process safe.

There’s a definite focus on fishing with the 190 FSH Sport, and being a center console, we’d expect nothing less. There are casting decks both forward and aft. At the bow, steps to both sides take the pressure off the knees from repeated trips up and down.

is a bit more comfortable as there’s the added benefit of the flip-back helm seat giving the angler a comfortable spot to sit while still keeping the line wet. It is also here that we have a nearby aerated livewell inside a starboard in-deck compartment. Just behind is dedicated storage for every fisherman’s best friend… the 5-gallon (19 L) bucket. 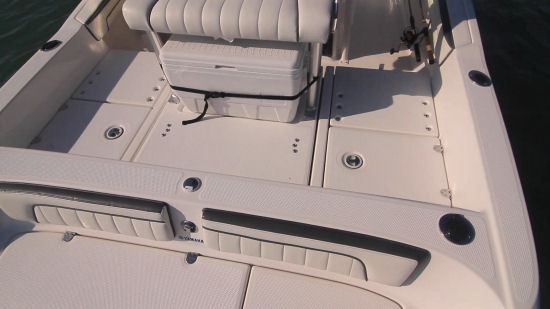 The aft deck offers plenty of walk-around space for fishing. 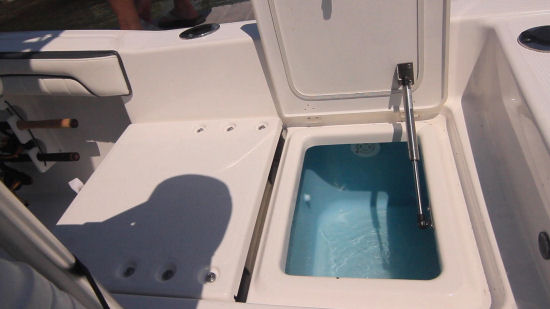 An aerated livewell is convenient to the fisherman at the aft deck. 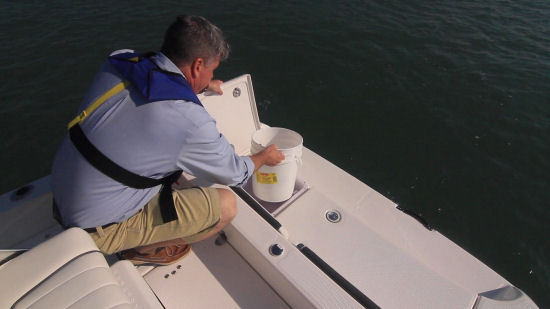 Bucket storage is just behind the livewell. 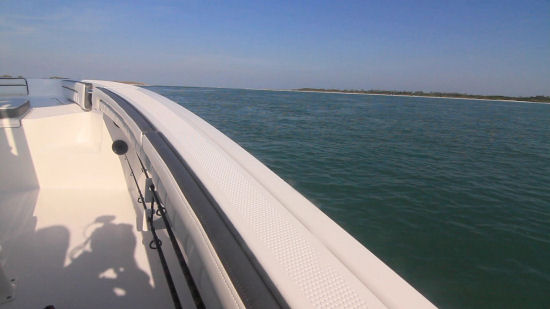 Padded bolsters surrounding the cockpit add a touch of comfort when working a fish or relaxing.

Where a PWC would have the typical “tell tail” water stream shooting up in the air, here that same outlet has a hose connected to it, allowing for a raw water washdown. All water used to hose down the decks flows aft and out the self-bailing cockpit. 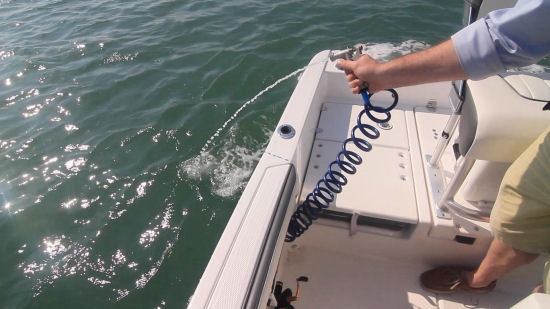 A raw water washdown comes standard on the 190 FSH Sport. 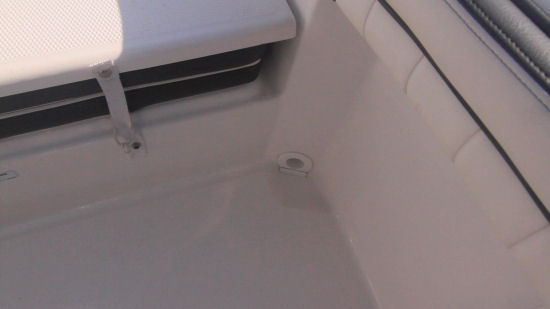 Aft drains allow water to be evacuated from the self-bailing cockpit.

Yamaha did a good job of accommodating storage on the 190 FSH Sport. Naturally, rods have a home nearly everywhere, starting with flush mounted rod holders in the caprails. When not in use, rods can go into vertically mounted holders to both sides of the center console. Under gunwale storage can accommodate rods up to 8’ (2.44m). Under the forward casting deck are two storage hatches, plus a nearly full-length insulated storage compartment just behind that can swap between generic storage, an insulated cooler, and an insulated fish locker. Naturally it is self-draining overboard. 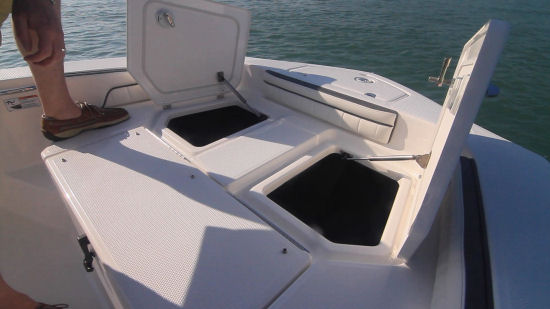 The forward hatches open with a turn and the lock latches are held in the open position with gas assist struts. The after hatch opens by grabbing a rubber strap that is also used to secure it in the closed position. 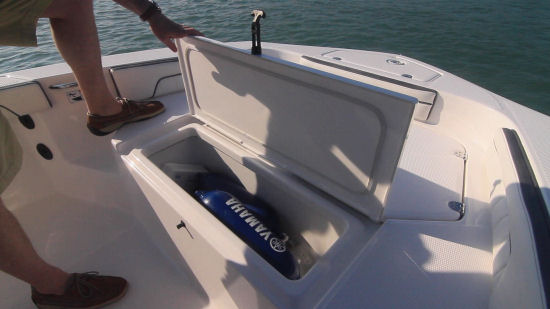 An insulated locker at the bow can serve multiple purposes. 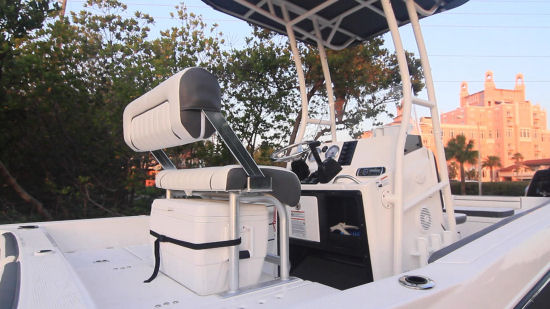 A carry-on cooler is just under the helm seat. Notice the seat has a flip back so it can serve double duty. 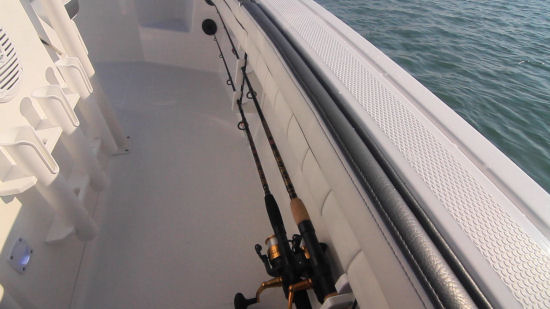 Under gunwale rod storage can handle rods up to 8’ (2.44 m) long. Vertical rod storage is to the sides of the console.

Of course, even with a focus on fishing, the 190 FSH Sport still accommodates the family just as well. Family features start with the aft seating at the swim platform. This is a characteristic common on all Yamaha boats and it makes a comfortable spot to relax at any time that the 190 FSH Sport isn’t underway. The swim platform has a three-step reboarding ladder that can be easily deployed from the water and a pair of grab handles just ahead eased the transition from the water to the deck. 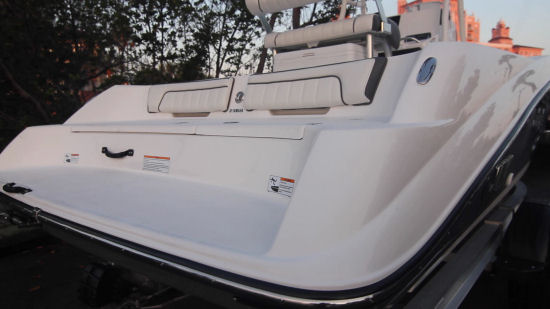 Yamaha’s aft seats have come to define the brand and are often among the most used on the boat. 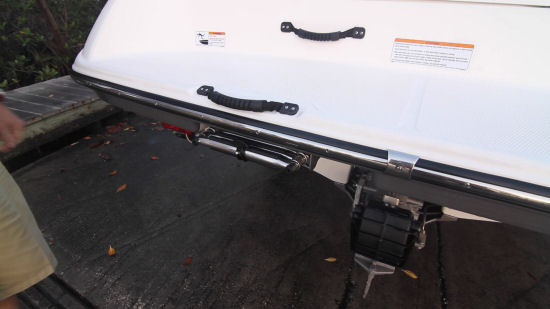 A pair of grab handles are mounted just ahead of the three step reboarding ladder.

At the bow, a cushion snaps onto the forward deck adding to this area’s comfort level. While the cushion doesn’t cover the entire deck it does serve to add to the conversational atmosphere in conjunction with the forward console seat just behind. 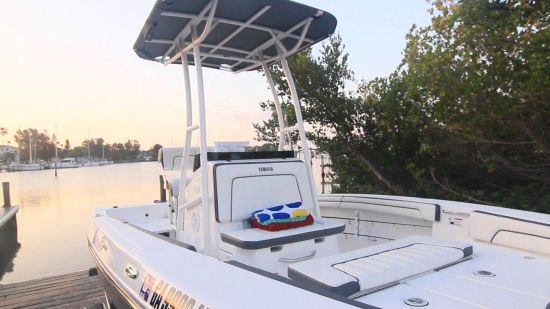 The forward deck has a cushion that makes a seat just ahead of the forward console seat. A pedestal table would be a nice touch here.

Of course there are two additional seats that flip open to both sides of the aft deck. These have the added benefit of their close proximity to the helm seat, keeping the occupants within a conversational distance to the operator. 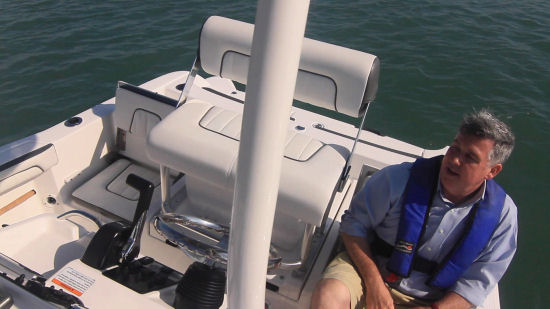 Jump seats to both sides of the helm seat keep riders close to the driver. 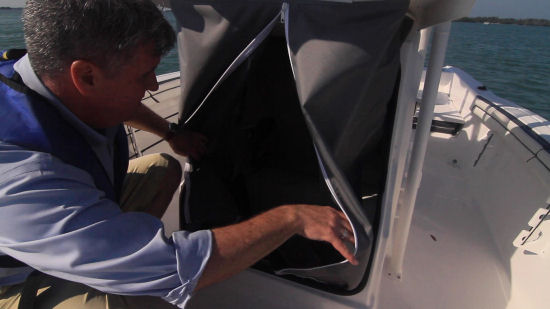 For transitions from the water to the restaurant, a pop-up changing room, a-la pontoon boats, is under the forward console seat. 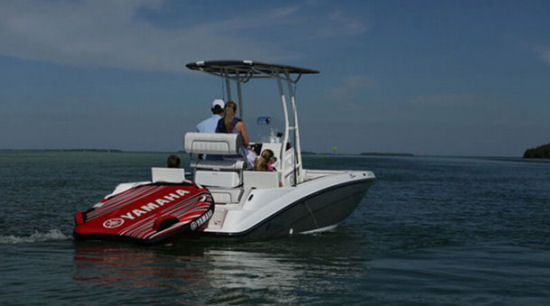 The ski tow eye allows for utilizing the 190 FSH Sport for watersports.

The Yamaha 190 FSH Sport is powered by a single, high output, 1.8 liter, naturally aspirated, marine specific engine putting out 180-hp. It is a direct-drive, being connected right to the jet pump, and it’s also digitally controlled. It’s easily accessed by lifting the center section of the aft deck, helm seat and all, to expose the engine compartment. 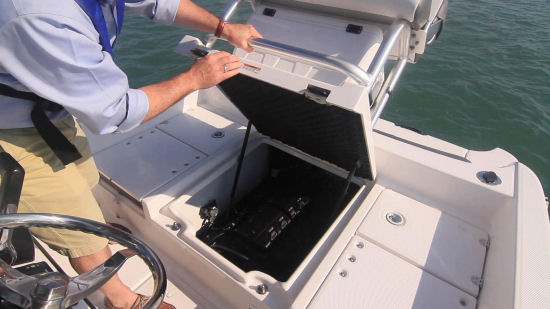 The engine is easy to get to for daily checks. The helm leaning post makes it even easier. 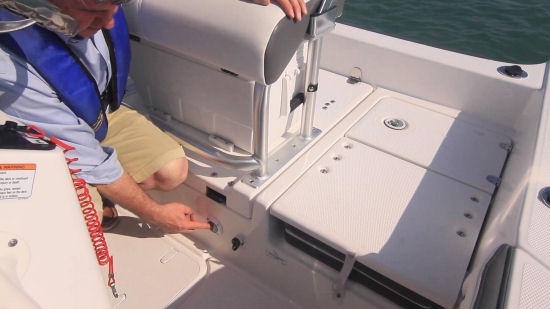 Ahead of the engine compartment is a fire extinguisher discharge port and right alongside is a freshwater flush connection for the garden hose. 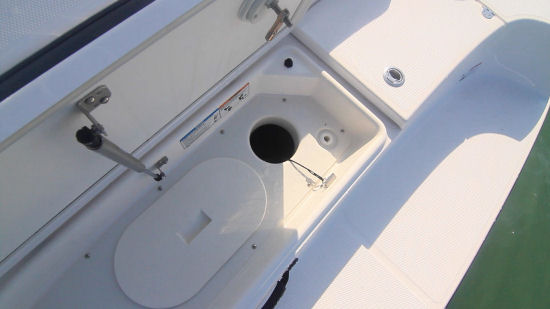 Under a hatch at the swim platform is a clean out port. A black engine cutoff switch can be seen in the upper right. 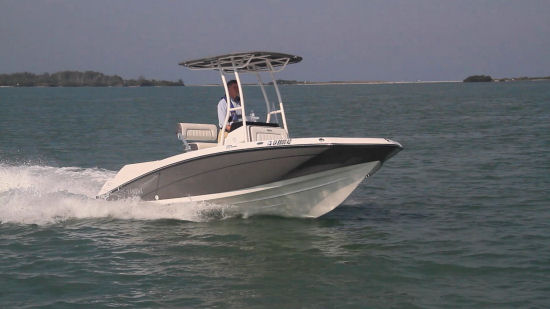 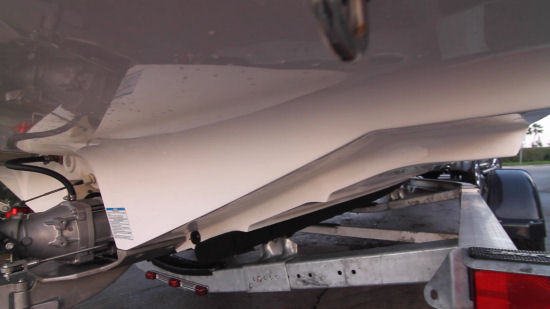 The 190 FSH Sport has an 18-degree deadrise, a step to the rear of the hull, and dual strakes leading to a flat chine.

She’s an exciting boat to drive and responsive to the helm with half turn steering from lock to lock. She tracks well during turns, banking slightly into the turns rather than remaining flat. If the turn is held to long, she will ultimately spin out, much like any other jet boat. She's also quite maneuverable at low speeds, which will serve her well when fishing in the flats.

That low speed maneuverability comes primarily from the addition of Yamaha’s Articulating Keel that extends below the exhaust nozzle. This provides not only improved steering at low speed but also off-throttle steering. Normally we see no steering on jet boats unless the throttle is engaged. Now, with the Articulating Keel, steering is provided as long as the boat has any measure of way on. 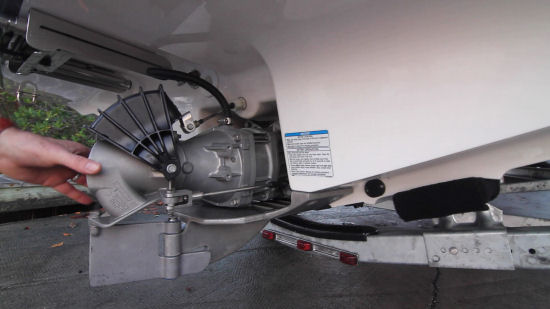 With the Articulating Keel, Yamaha was able to add off-throttle steering in addition to better handling at all speeds.

The FSH Series are available in three models, each increasing in amenities. They start with the FSH at $27,999. Stepping up to the Deluxe model adds a Bimini top, dual batteries, bow pedestal, bow cushions, and the convertible leaning post along with a retail price of $29,999. The top of the line is the FSH Sport, the subject of this report. It adds a T-top over the center console and retails for $31,999.

The 190 FSH certainly garnered a lot of attention at her unveiling, and it’s easy to see why. She represents a boatload of out-of-the-box thinking and brings Yamaha reliability to the table. With the new Articulating Keel, maneuvering abilities have been greatly improved. We can easily see how this will be an attractive model and takes Yamaha from being a company that attracted families to watersports boats to one that now can attract anglers. 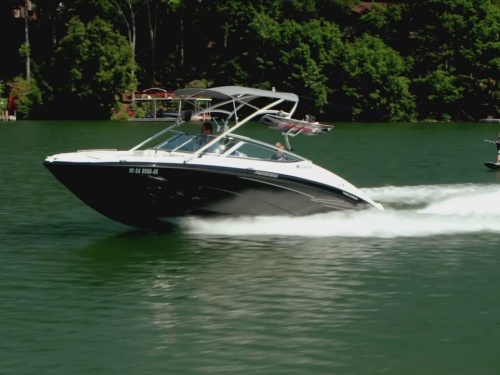