The Yamaha VX Limited is an upscale PWC equipped with Yamaha's new TR-1 High Output engine. The company reports that the engine is 40% smaller than the motor it replaces, yet produces 12.7% more power. The VX Limited was very quick getting on plane, with 0 to 30 mph times of just 2.4 seconds. Top speed is 53.1 mph at 8100 rpm, and most efficient operation is at 6000 rpm and 31.2 mph, at which point she burns 3.4 gph for a range of 155 miles with a 10% fuel reserve. 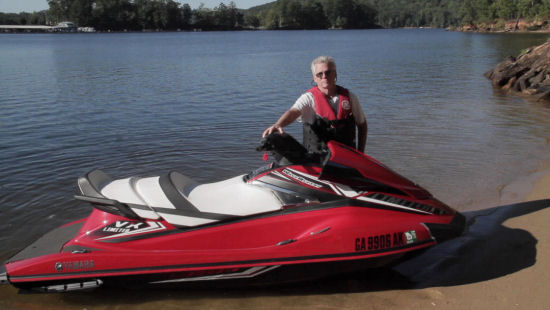 The Yamaha VX Limited is built around the popular VX WaveRunner, but with many accessories added. Note the Metallic Red color.

Yamaha has taken the mission of family fun seriously, putting together a package deal consisting of its popular VX WaveRunner and every accessory needed to get on the water, get towing, and store it all properly. It’s a long awaited get together that is sure to rock some boats… literally and figuratively. 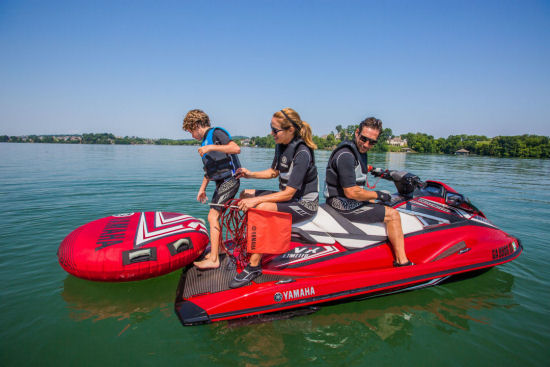 As a watersports platform, the VX Limited is ideal for family fun.

This package comes with every accessory that a family may want for fun times on the water. Here’s the list -- 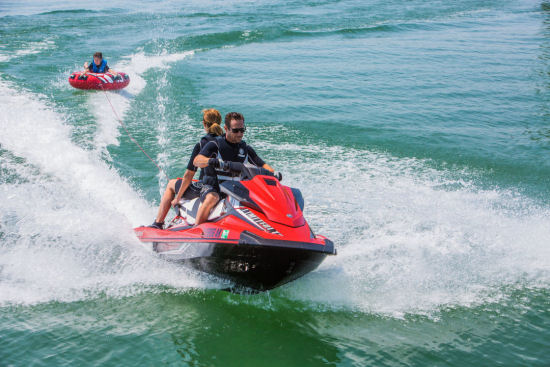 The VX Limited comes complete with everything needed for family watersports. 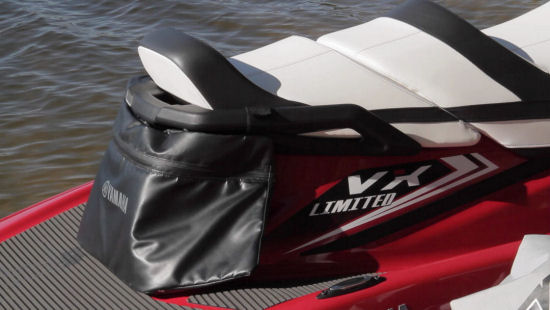 An accessory bag attaches to the rear of the seat.

As for the Yamaha VX Limited itself, it’s not a starter model, but more of a mid-level designed to carry up to three people. Let’s look at some of the features.

RiDE is one of the most significant advancements we’ve seen in personal watercraft. While the spring-loaded throttle trigger is in its normal position on the right side of the handlebars, the left hand handles another trigger that controls reverse. With RiDE, and a simple squeeze of the left trigger, the VX Limited enters reverse mode. Because the reverse bucket directs thrust out the sides, drivers get the benefit of instant steering response. Keep in mind that the reverse steering is backwards… left is right and right is left, and this takes some getting used to, but it does come. We used the bottom of the steering handlebar -- not the top -- to dictate the VX Limited’s direction of reverse travel and got the hang of it pretty quickly. 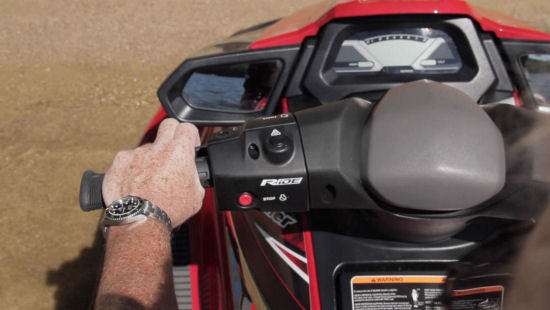 The trigger for the RiDE features is located on the left side of the handlebar. Left is reverse, right is forward.

We’re cruising along and all of the sudden, a sandbar appears ahead of us, just under the surface. We need to stop… now. What happens if we grab the RiDE trigger from full speed? The RiDE technology adjusts the deceleration and reverse accordingly so that the watercraft will still stop in the most efficient manner while remaining in control. When riding at cruising speeds, the engine deceleration is moderate. At higher speeds, the deceleration is more pronounced. It allows the craft to slow and stop in as short a distance as possible while still remaining in control, and without launching the driver over the handlebars. Yamaha says that stopping travel distance is reduced by 30%.

What if there’s a new rider onboard, and he/she grabs both triggers at the same time? The RiDE electronics correctly assume that the vehicle still needs to be stopped and works as if only the left trigger was activated.

Yamaha powered the VX Limited with the new TR-1 engine. It was designed to replace the MR1 that has proven itself for years in Yamaha watercraft. The new model is more powerful, lighter and smaller than its predecessor. Let’s look at some specifics of this engine. 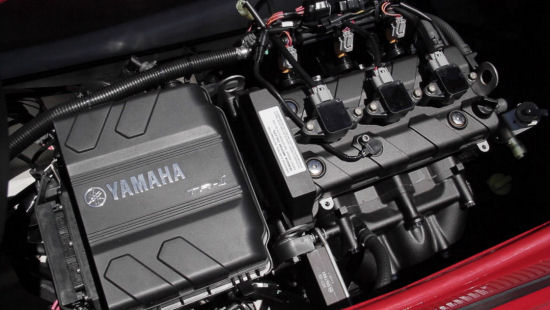 The TR-1 is smaller than the old MR1, so there’s more room around all sides of the engine for easier maintenance.

For the new motor, Yamaha dropped from four-cylinders and five valves to three cylinders and four valves. Displacement is reduced from 1051cc to 1049cc and the overall weight is lower, 160 lbs. (73 kg) versus 216 lbs. (98 kg). That’s a 25% reduction. While the new engine is 40% smaller and 25% lighter, Yamaha says it increased power by 12.7%. This means that the new generation of WaveRunners, including the VX, is lighter, has better acceleration, better top speed, and more nimble handling. For better serviceability, the TR-1 has more of a convenient location for the oil filter, air filter, and service checkpoints. Improved engine coatings lead to improved corrosion protection. 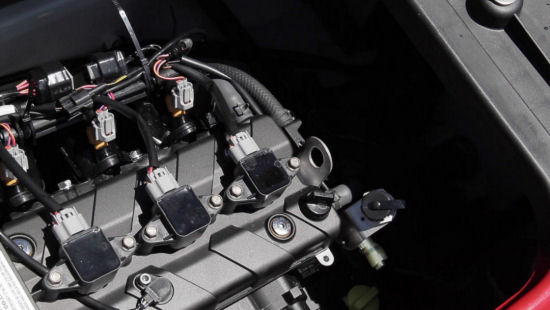 That black cap to the rear is a freshwater flush connector. Just attach a garden hose to rinse away any saltwater.

On any WaveRunner, it’s tempting to squeeze the throttle trigger the whole way and let it rip. But sometimes there’s a need to travel through no-wake areas and holding the trigger at a precise setting for a long time is inconvenient, so Yamaha came up with the Cruise Assist/No Wake buttons. A single press and three-second hold of the No Wake button is answered by three “beeps” and the VX will set a forward cruise speed of approximately 5 mph. It’s slow enough to produce no wake but fast enough to make progress and provide thrust for steering without having to touch the throttle. To return to normal operations, just squeeze the trigger and No Wake is disengaged. For cruising, bring the VX Limited up to a comfortable speed, press “SET”, and squeeze the trigger fully. The Cruise Assist will engage and hold that speed regardless of the throttle position (unless it’s released). Then the cruise speed can be adjusted incrementally with the Up and Down arrows. This feature would be good for towing a tube, or perhaps when two or more WaveRunners are traveling together. 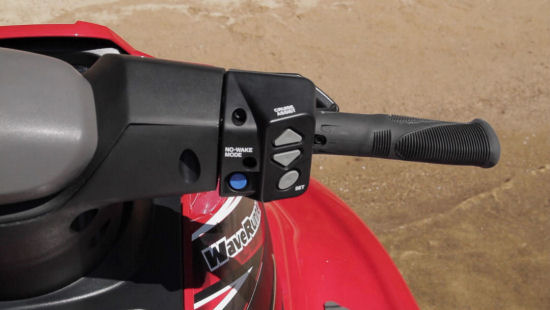 The Cruise Assist and No Wake buttons are located on the right handlebar.

The NanoXcel hull far surpasses its fiberglass counterpart in terms of light weight and strength. It starts out life as a flexible sheet. When put under extreme pressure, it becomes solid with extreme strength. In the case of the WaveRunner, the pressure is actually a machine press in the shape of the hull. When the two parts of the press come together on the sheet, the hull is formed and the solidifying takes place. Separate the press and out comes the hull. 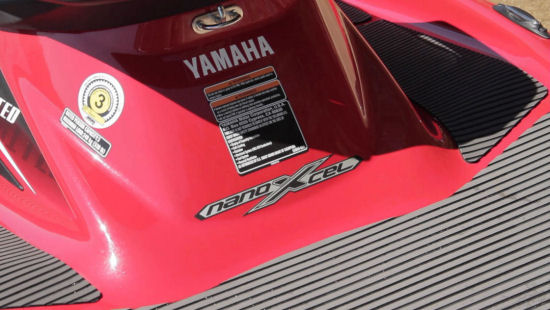 The NanoXcel hull is light and strong, which makes for a sportier ride while burning less fuel. 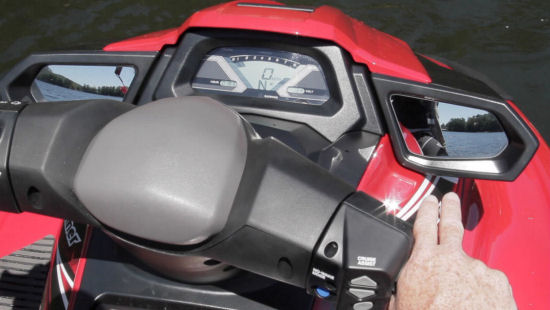 In the center of the panel is a multi-function LCD gauge that gives speed and engine rpm as well as an indicator for forward, neutral and reverse.

The VX Limited features higher-quality accessories, including four pull-up cleats (two on each side), and chromed highlights, such as the Yamaha logo at the rear of the machine. 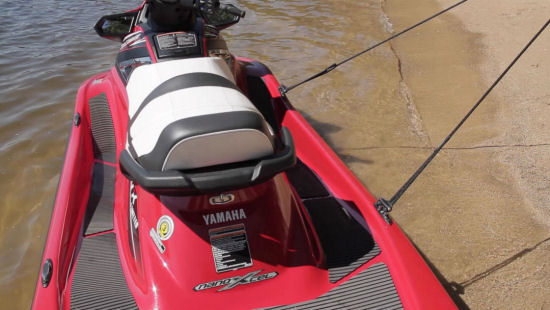 Four pull-up cleats that enhance the VX Limited’s versatility are another example of the complete accessories package this watercraft comes with.

The three-person contoured seat is comfortable and it accommodates a rear-facing observer during towsports. It’s upholstered with a thick marine-grade vinyl. 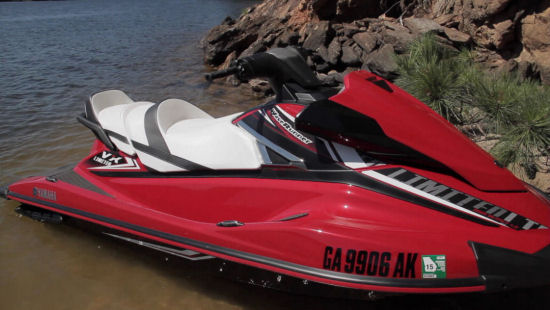 The rear section of the cruiser seat curves up to provide more safety for the third rider.

The VX Limited is fully compliant for tow sports with its three-person capacity and accommodation for a rear-facing observer. It’s also legal for states that require rearview mirrors for towing. It makes sense that the rear deck is large enough to serve as a staging area for getting onto the tube, and as a reboarding platform. To reboard from the water, flip down the spring-loaded step and climb aboard. 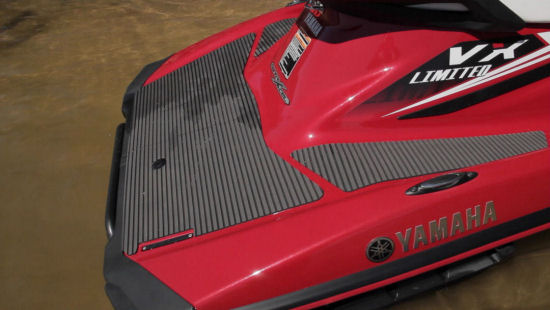 A full-sized platform at the rear makes for a convenient staging area for getting into the water. 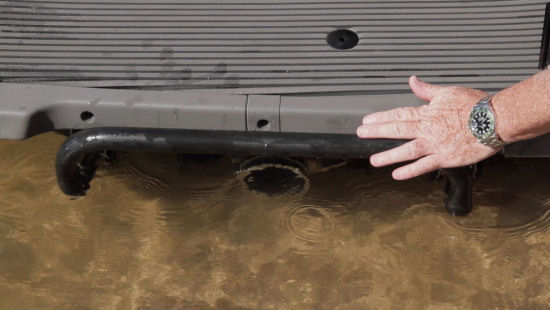 The Yamaha VX Limited comes with 24.6 gallons (108 L) of storage in three separate compartments. The front compartment is the largest and it includes dedicated fire extinguisher storage. The hatch is held open with a clever hinge that locks when opened past a detent. 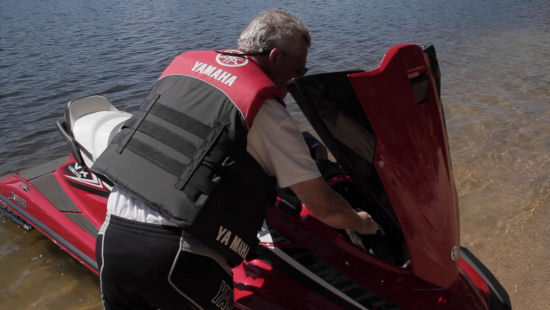 We kept extra life vests in the forward storage compartment and there was available space for more.

Just ahead of the driver is a smaller glove-box-style compartment. It would be good for items such as sunscreen and vessel registration and it’s large enough to hold a couple of water bottles. The VX Limited is the only WaveRunner with a 12V power plug and Yamaha located it in this compartment, providing a place to plug in the electric water toy inflator. 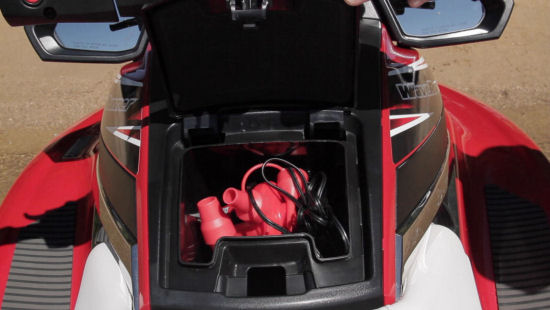 Drop quick retrieve items into this convenient compartment just ahead of the driver. 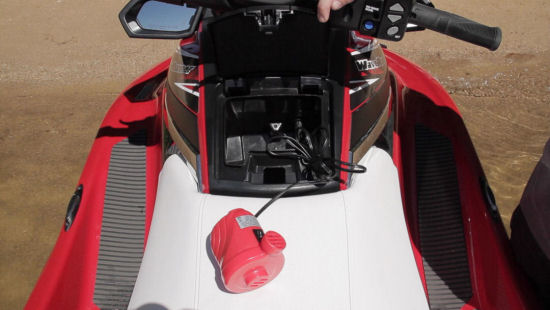 The water toy inflator plugs into a socket in the center storage compartment.

Remove the seat to uncover waterproof storage. This container has a screw top with a rubber O-ring to keep items dry and it’s removable. 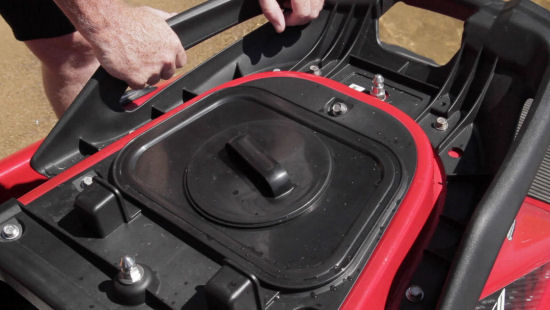 Yamaha covers the decking in Hydro-Turf non-skid matting to allow for a better grip for bare feet. It also remains cool to the touch in direct sunlight. 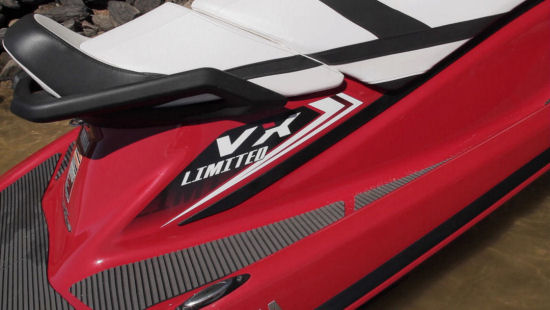 Mounted on the stern of the VX Limited just below the seat, the tow hook is an easy attachment point for a towrope. 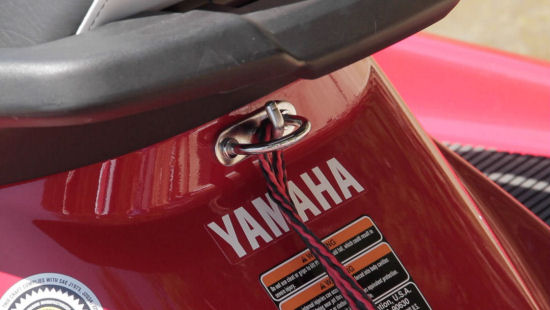 A tow ring allows the VX Limited to be used for tow sports.

Dual mirrors molded into the front visor give the rider better spatial awareness and let him or her keep an eye on the end of the towline. This is a required feature in some states for all watercraft being used for towing. 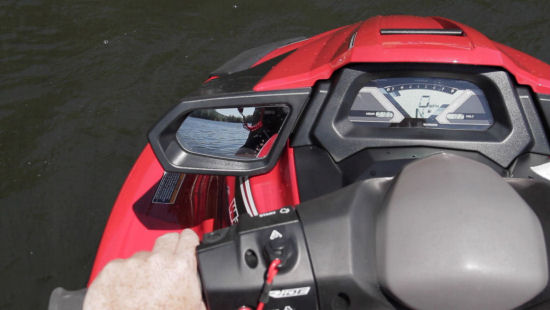 The dual mirrors are integrated into the visor for a streamlined look.

The WaveRunner VX Limited is comfortable to sit on and in maneuvers, she transitions from one move to the next. This is a family watercraft designed to keep everyone out of trouble. 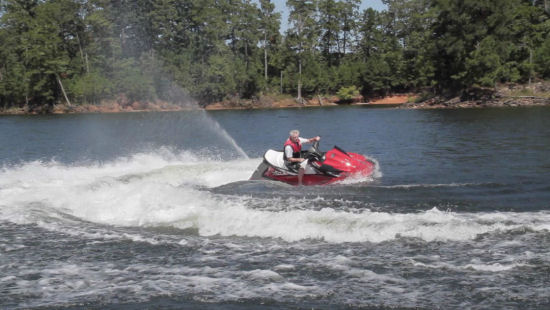 The Yamaha VX Limited doing what it does best… cranking and banking. 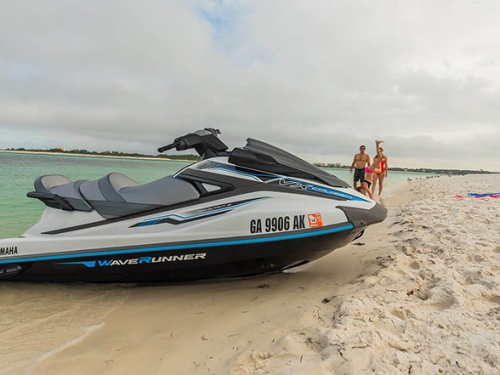 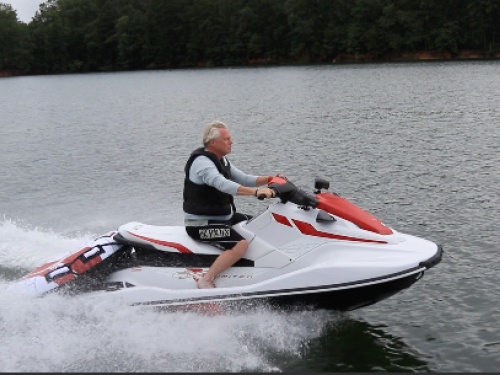 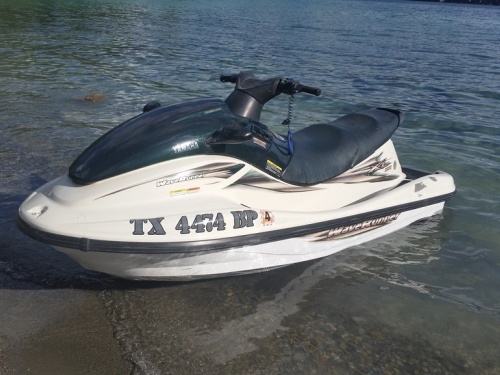 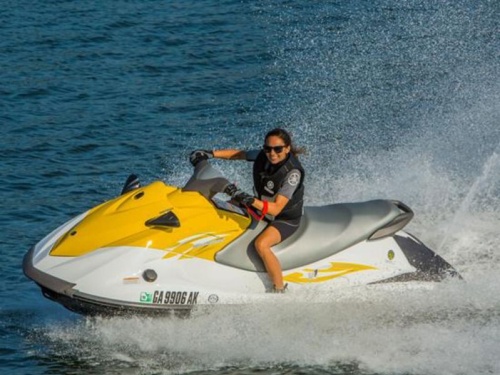