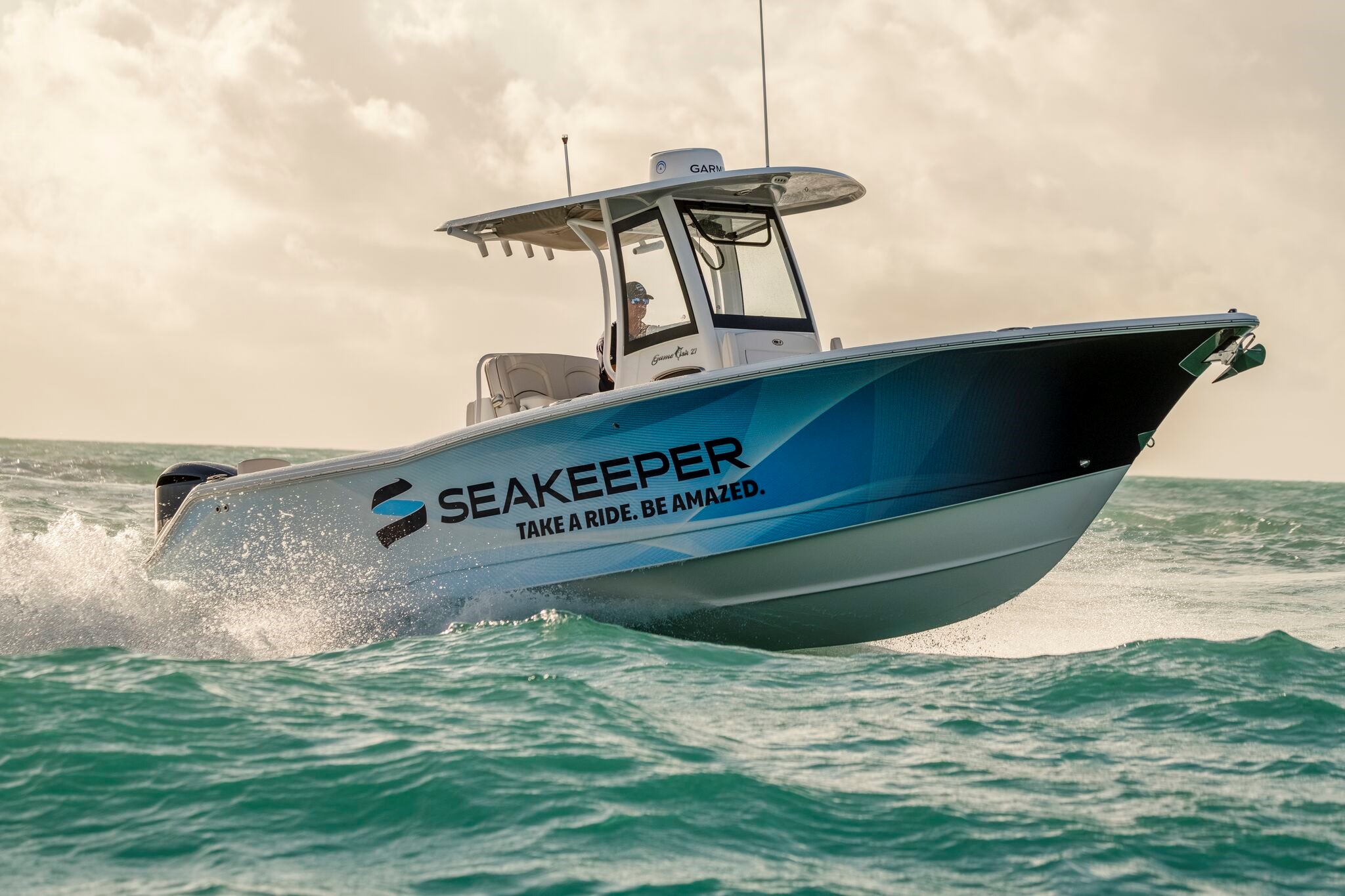 Seakeeper is a computer-controlled gyroscope that eliminates up to 95% of boat roll, according to the company. Its proprietary design, inspired by aerospace technology, centers on a powerful steel flywheel that spins at high speeds in a vacuum, eliminating air friction and allowing weight, heat generation, and power consumption to be minimized. The technology works in all sea conditions, both at rest and underway.

Completely self-contained, Seakeepers produce no drag and, unlike fin stabilizers, have no risk of damage from impact or snag. A Seakeeper can be installed as a new build feature or can be retrofitted to virtually anywhere on the boat.

Since the first gyro shipped in 2008, more than 13,000 Seakeepers have been sold, according to the company. The company offers models to accommodate boats up to 85’ (26 m) and larger, with options for multiple installations on vessels greater than 85’.

The newest Seakeeper, the Seakeeper 1, is the smallest unit yet, and has been designed for boats from 23’ to 30’ (7 to 9 m) and, much like the Seakeeper 2 and 3, runs on 12 V DC power. Its small envelope and flush mount design means that it can be installed nearly anywhere on the boat. That flush mount design is what separates the model 1 from all the others, which have the large flywheel protruding from the bottom of the unit.  That enables the versatility that allows this unit to be mounted right to the deck rather than to the stringers.

More than 30 OEMs have already equipped their models with a Seakeeper 1.

For those who have an older boat and want to retrofit it to stop the rocking and rolling, Seakeeper has performed more than 3,000 refits – and confidently says they can find space to enhance practically any boat. 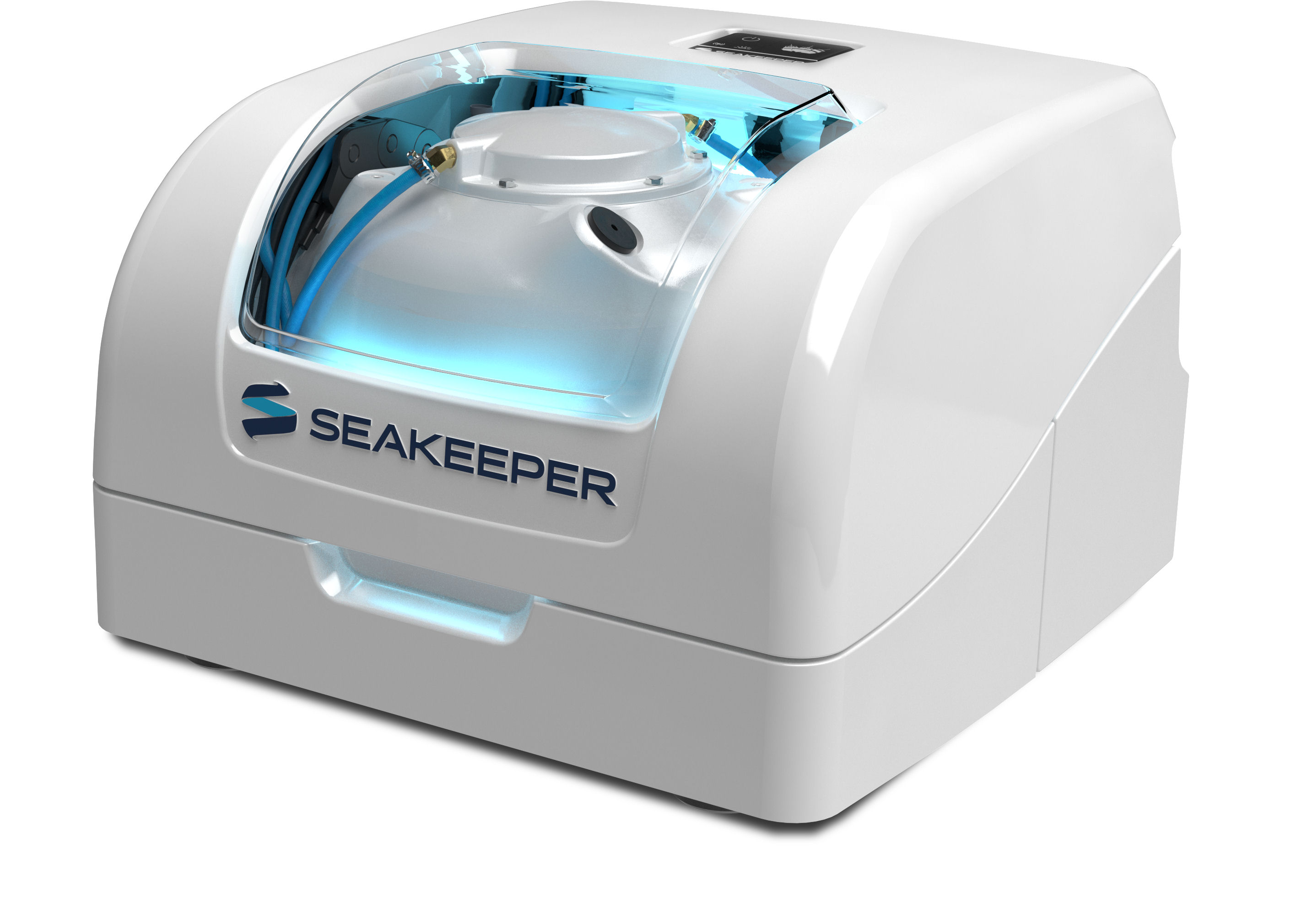 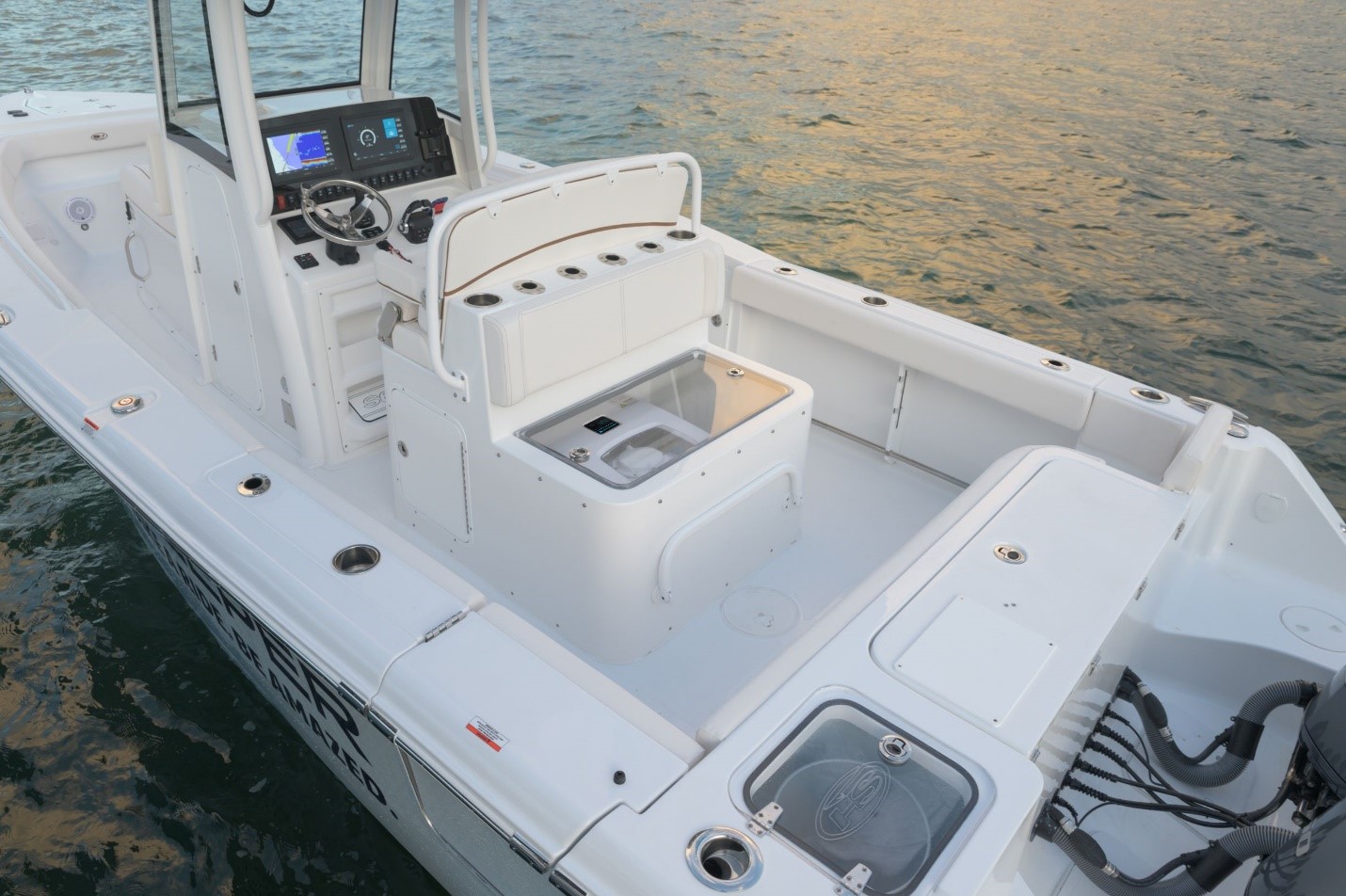 Designed specifically with smaller boats in mind, the Seakeeper 1 features a flush mount design, completely containing the unit with no part of the sphere hanging below the point of installation.  It can be mounted virtually anywhere, even off the centerline of the boat.

With most standard seats coming in at 16” to 17” (40 to 43 cm) high, the Seakeeper 1 is able to fit beneath most seats on board, making finding a place for installation easier than ever.

The Seakeeper 1 features a control keypad, called the ConnectBox, directly on top of the unit with the option of a separate helm installation. This eliminates the need for the separate Seakeeper display, which could take up valuable space on the helm of a smaller boat.  That helm display is what fed information to MFD's in the panel, but now that information can come from the display mounted right to the boat.  A simple NMEA 2000 connection is all it needs to talk to the MFD.

The flywheel in the Seakeeper 1 has been completely redesigned, making the total package smaller and allowing the unit to spool up to stabilization in just 15 minutes.

Drawing a max 55 amps at spool up, the Seakeeper 1 draws less power than your stereo cranked up! 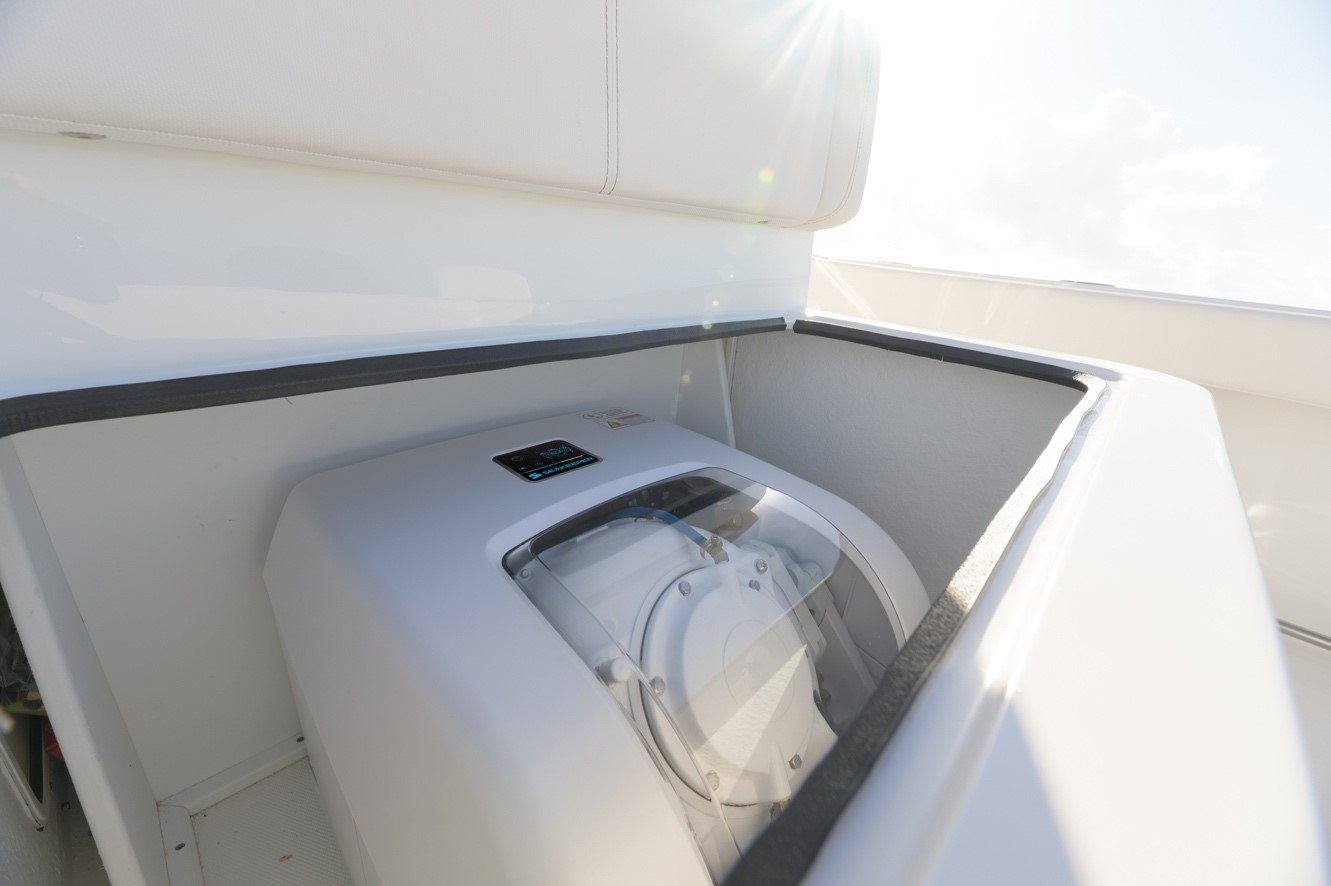 The Seakeeper 1’s ConnectBox control keypad is accessible right from the top of the unit. 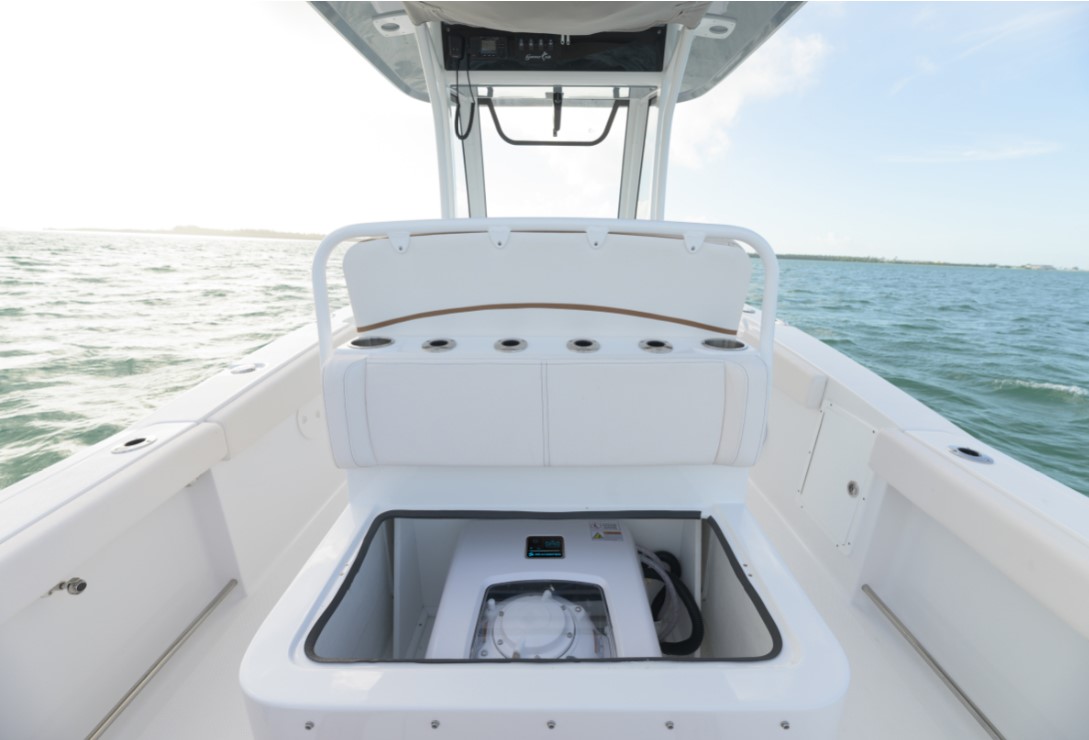 The Seakeeper 1 is mounted beneath the aft-facing seat in this Sea Hunt 27.

Like all mechanical devices, Seakeeper recommends scheduled maintenance that should not be done by a DIY boater or untrained technician.

By housing the motor, bearings, and flywheel in a vacuum, Seakeeper says the flywheel can spin up to three times faster and halve the power consumption while also reducing flywheel weight by 2/3. The vacuum also isolates the internal components from the marine environment.

There’s a patented cooling system featuring a glycol/seawater combination which enables the flywheel to operate in its vacuum without overheating. 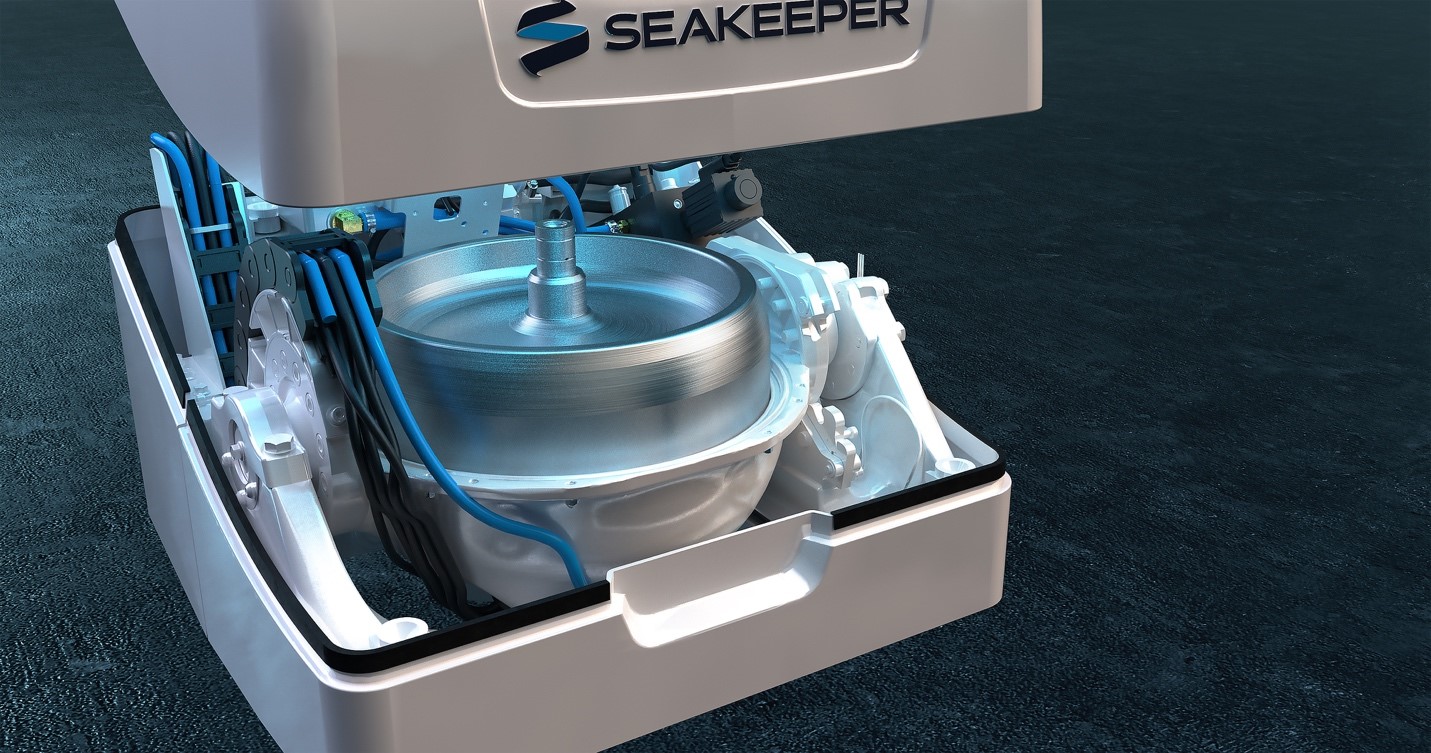 All Seakeepers are computer-controlled, allowing the Seakeeper to actively sense the sea conditions and adjust performance accordingly.

The Seakeeper 1 was designed with a flush mount, so no part of the sphere hangs below the mount – making for easier installation on the boat’s deck, in the bilge or in a storage compartment.

Unique to the Seakeeper 1 is the single cylinder, hose-less brake system, making it replaceable in the field.

Different from all other flywheels in the Seakeeper product lineup, the flywheel of the Seakeeper 1 was redesigned entirely to reduce the height of the unit, allowing it more flexibility for installation locations.

Its redesigned motor operates between 68 and 75 decibels and features vibration isolation – making it the quietest Seakeeper yet, according to the company. 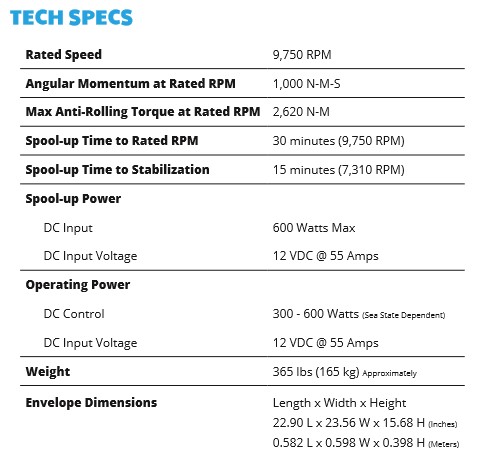 Like all mechanical devices, Seakeeper recommends scheduled maintenance that should not be done by a DIY boater or untrained technician.

Since most of the critical components operate in a sealed enclosure, protected from the corrosive moisture involved in life on the water, maintenance is minimal. Outside of the sphere, the closed loop hydraulic circuit and cooling circuit should be periodically inspected and serviced.

While the units are designed to take occasional spray, Seakeeper recommends a gentle freshwater washdown following exposure to seawater. Recommended maintenance should be performed by a certified Seakeeper dealer or Seakeeper factory technician.

BoatTEST has tested the Seakeeper 1, and have found the roll to be significantly dampened in all cases. Handling is not much different than without the Seakeeper.  That is to say that the unit does nothing to stop the boat's pitching moment.  So operating in heavy seas still has the boat rising and falling to meet oncoming waves leaving the handling characteristics the boat was designed for intact.

Crossing waves on the beam or quarter are another matter entirely.  Now the boat will stay level, greatly enhancing the handling.  We found this most notable when crossing wakes.

Sea legs are also another matter.  When standing on a rolling boat, seasoned boaters automatically use their legs to remain perpendicular to the horizon and keep their balance.  That won't work with the Seakeeper engaged.  As the boat starts to roll, the legs compensate but the boat stops short and you no longer need to compensate by bending one knee, like sailor Bill. The Seakeeper puts a whole new meaning to the term “sea legs.”

And, there is the subject of mal de mer – the whole reason the Seakeeper was invented.  With rolling reduced by 95%, mal de mer should be greatly reduced. The boat will still pitch, but our experience with guests aboard is that they usually get sick at low speeds, when drifting, or in a rolly anchorage – all situations where the Seakeeper performs admirably. 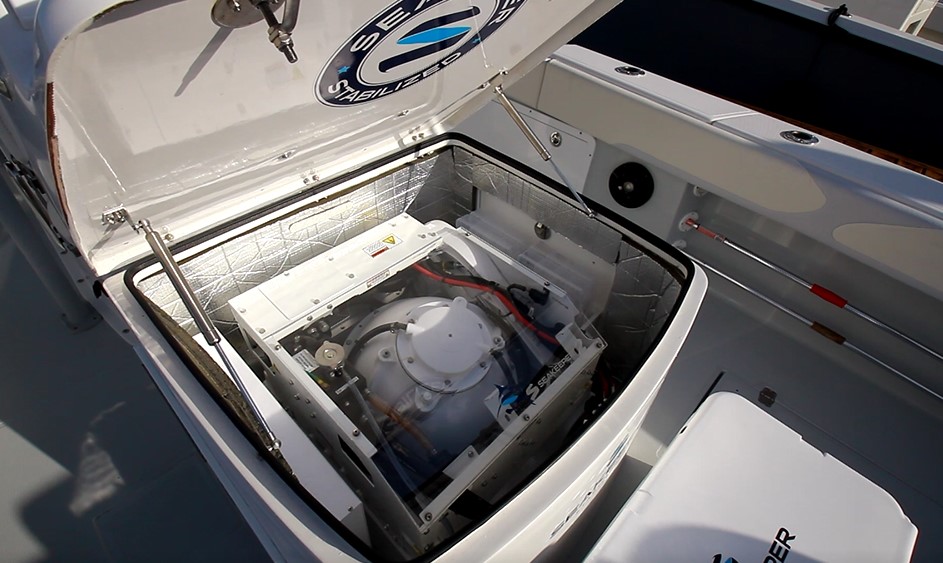 Here’s a Seakeeper 2 installed on board a Bluewater 2850 that we tested recently. The Seakeeper 1 is 35% smaller and 15% lighter than the Seakeeper 2.

The Seakeeper 1 retails for $15,900 which does not include installation.

Every recreational unit in the Seakeeper lineup comes with a standard two-year/2,000-hour warranty with extended warranties available.

To inquire about a refit installation, there’s likely a Seakeeper dealer near you. 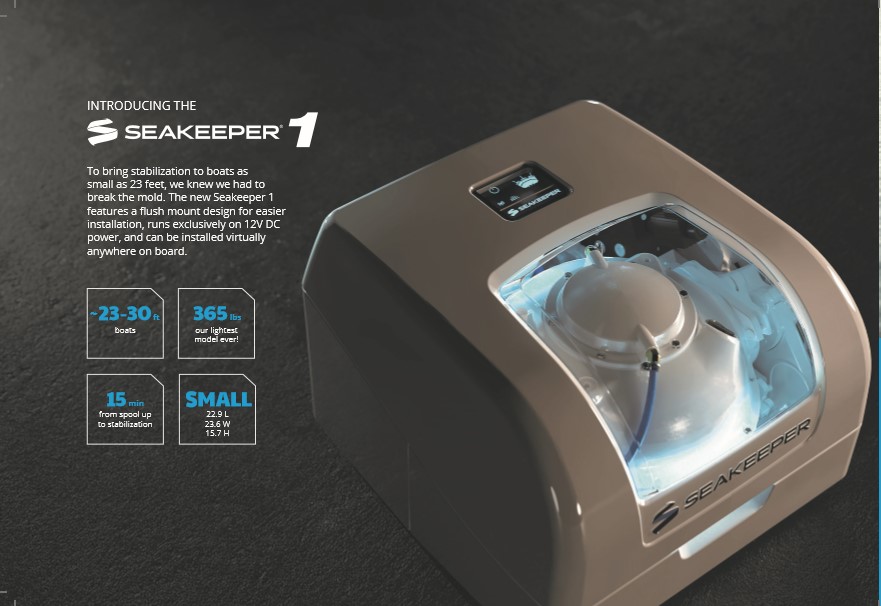 Seakeeper knew that they needed to break the mold with the Seakeeper 1 to deliver a unit for boats as small as 23’ (7.01 m).

With all of our previous positive experiences with Seakeepers, we note that they have taken their proven technology and adapted it to a new market – perhaps, the most important of all. They’ve produced a new product that takes less time to spin up to operating speed. It has a new quieter motor, and maintenance items like the braking system have been modularized so that field maintenance is easier. The Seakeeper 1 runs off DC power and draws only a max 55 amps at spool up, which makes it practical for most installations in the small boat size range intended.

A Seakeeper onboard will add value to any boat, and on the used boat market will certainly make the boat stand out from the rest, and boats with one should sell at a handsome premium. Let’s face it, for the cost of some fancy electronics, nothing else is going to keep all of the guests onboard comfortable like a gyro stabilizer.