Here's the latest drug runner toy from Europe. This thing can reportedly scream across the English Channel at 60 knots with a full load of fuel and...whatever. The story goes that the British Coast Guard was so astonished by the speed of the unknown boat when picked up on radar that they brought in a special high-speed helicopter to chase it. We're told that the craft was designed with low profile and painted black to make it difficult to spot on the water. Allegedly drugs were found on board when they caught it. 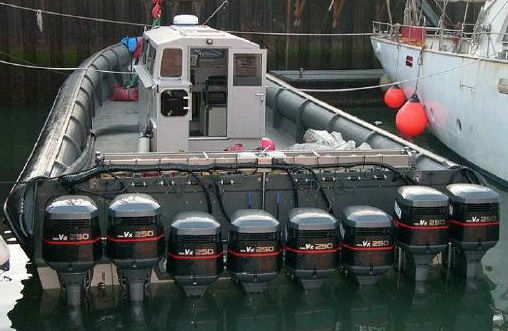 The story began late last year when Spanish authorities conducting anti-drug smuggling operations seized a number of boats sold by a British company and reported their use to UK customs officials. The craft were allegedly used to smuggle drugs from Northern Africa to Southern Spain. The company was a front for supplying high-speed inflatable boats to illegal drug merchants, advertising them as high-speed, uncatchable craft that have a "low radar signature." (As in "flying below radar" we assume. Guess the druggies had never heard of radar "sea clutter.")

According to our sources, an enterprising British boat dealer was finally arrested in England. Evidence presented during the man's trial this year indicated that he was making secret deals for boats like the one pictured between 30 ft. and 60 ft. long, costing as much as $680,000, and featuring up to eight 250-horsepower engines that enabled them to haul grass at speeds up 60 knots.

BoatTEST.com would like to do an official performance test on the boat, but unfortunately our calls have not been returned.