Perhaps we’re a little more sensitive to the potential debilitating effects of Ethanol in fuel because when it was first introduced to Long Island Sound marinas (BoatTEST.com is located in Stamford, CT) it caused a summer of hell for many boat owners around our office. For some owners of outboard engines we know, the summer was pretty much ruined as dealers struggled to fix a problem they didn’t understand. When ethanol is placed in marine fuel it can infect your engine with troublesome maladies too numerous to mention. Let’s call them ETDs (Ethanol Transmitted Disease). ETDs include clogged fuel filters, fouled fuel systems, vapor lock, cracked valves due to a lean fuel mix, and even worse things. Happily you can keep the worst from happening, and your boating summer running smoothly, if you take some simple, low-cost, precautions 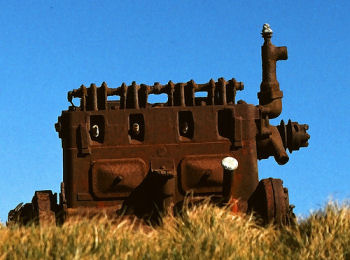 Your engine and its fuel system wasn’t designed for ethanol, but you can keep both working with a few precautions.

If you are burning ethanol in your fuel we guarantee that it is affecting your engine’s performance. Further, the chances are good that it may be doing more than that. Don’t wait for the tell-tale signs of ETD trouble—

Don’t be distracted by the debate over the pros and cons of ethanol because those, for the most part, are political and economic issues. This is no red herring – just ask any engine manufacturer. What you need to know is what E-10 can do to your engine. 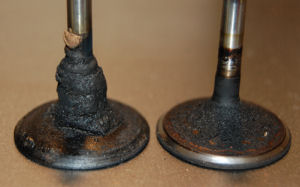 This picture shows where the resin that ethanol dissolved from a fuel tank ended up.

Ethanol is a strong solvent.

It can dissolve some types of rubber and plastic, and it can even dissolve the resin in fiberglass fuel tanks built before the early ‘80s. If you own a boat with a fiberglass fuel tank built around 1983, we advise you to call the manufacturer and ask if it is safe to use E-10 in the tank. If the builder is out of business or you can’t get an answer, then proceed carefully. Be alert to smoking, new engine noise, and loss of performance, all of which may indicate that you have a problem of resin dissolving in your fuel. 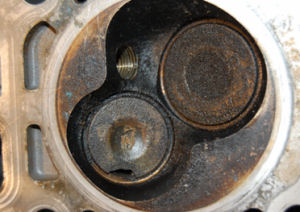 The chipped valve was caused by a lean ethanol mix.

This characteristic can cause all sorts of problems due to “phase separation” which is the actual separation of water in the fuel mix. When the water is separated out its ingestion can cause lean fuel mixtures which can crack your valves. It reduces lubrication in 2-stroke engines.

Remember that water will settle to the bottom of your tank – where the fuel pick up is located. In 70-degree ambient temperature an E-10 mix can absorb .5% of its mass in water. The warmer it is, the more water can be absorbed. Water mixed with your fuel will cause your engine to run lean and hot and that is when valves are typically burned.

During the season it is recommended that you keep your fuel tank 7/8ths full. That is so there is less space in your tank for humid air. Remember the fuel tank in your car is pressurized and does not have a fuel vent as does your boat.

Ethanol has a short lifespan.

It was designed for automobiles, where fuel is typically used every day or so. In boats, typically the fuel will sit for a week or two, or even more, before it is used. The longer it sits the more apt it is to pick up humidity from the air (through the air vent). Over time the fuel will begin to degrade. Winter storage is problematical.

Ethanol has a lower BTU count.

Depending on who you listen to, ethanol has from 34% to 30% fewer BTUs in a gallon vs. gasoline. That means your boat will not perform as well with ethanol added to its fuel mix. The more ethanol that is added, the more a boat’s performance will suffer.

Even the National Renewable Energy Laboratory (which is a pro-ethanol organization) states that “…the miles per gallon you can travel on ethanol is less than the miles per gallon for gasoline…Thus, your mileage will drop in direct proportion to the energy contained in the fuel - which amounts to a reduction of about 30% in the miles delivered per gallon of fuel ethanol versus gasoline.” [This is comparing 100% ethanol to 100% gasoline – which is not what we are burning these days.]

A fuel mix of E-10 has about 3.5% fewer BTUs than 100% gasoline, so an engine burning it will suffer a similar loss in miles per gallon. This is so small as not to be noticeable by most boaters. Boosting the percent of ethanol to 15% of the fuel mix will result in a reduction of about 5.2% in performance.

In order to test the amount of ethanol in your fuel mix, you need to test it yourself. Fuel vendors are not required in some states to report the amount of ethanol they are mixing in the fuel. There may be more than 10% ethanol in the fuel you are buying. You need to check. The kits cost from $15 to $25. Get several of them. Find them on the Internet. Amazon.com has one for $19.

Note that this fuel mix has about 8% of ethanol. This mix is safe to use in marine engines.

Use a brand that you trust to stabilize your fuel.

Leading fuel stabilizers feature enhanced chemistry which reacts with fuel immediately upon contact, working chemically within the gasoline to halt the aging process and slow phase separation. Stabilizers are typically used in fuel during winter storage, but should now be used any time your boat will be sitting for more than a couple of weeks without use. Fuel stabilizers also have a lifespan which rarely exceeds a year. Check the bottle you buy.

But before going to the trouble, carefully read the description of the filter, what it will do, and at what flow rate. Typically fuel filters are not 100% effective at all flow rates. Some are only 50% effective. You must install the micron filtration that your engine company recommends.

In 2005, when marinas in the northeast began getting E-10 fuel, gum and varnish was clogging injectors and carburetors in marine engines. Each engine manufacturer reacted in its own way to solve the problem and this is why you must follow their directions rather than simply buying an off-the-shelf filter. The engine makers have been there and done that.

Check your filter after each 25 hours of use until you are confident in the fuel you are using.

It Could Get Worse!

We have said that ethanol in your fuel is a political problem and from now until May 21, 2009, the EPA is listening to the public about whether or not it should approve moving the mix up to E-15 – 15% ethanol.

Not surprisingly, people living in farm states are generally supporting the move to E-15, and people whose economic ox is being gored by E-15 are against it.

But we think that there is a third position (at least) and that is one from a boat owner’s point of view. Because the engines and fuel systems in boats are different than those used in automobiles the effect of E-15 on our recreational investment needs to be given fair consideration. Just as E-10 has relegated virtually every boat built before the early 1980s with a fiberglass tank to the junkyard, so, too, could E-15 have deleterious results and unforeseen consequences for boats built since that time.

We urge you to write a short note to the man at the EPA in charge hearing the public’s opinion on raising the ethanol content in fuel to 15%. His name is James W. Caldwell, and we are told he is a nice guy with a very open mind on the subject. Please drop him an email or give him a call.