Even in the Midwest, the area of the
country that is benefiting most from the ethanol fiasco, opposition is growing to
the further expansion of ethanol in fuel. Not only because this solvent is playing
havoc with outboard motors, but also because people are beginning to realize that
even OPEC supports the ethanol cause in the U.S. because it takes more gasoline
to make than it replaces. Recently, Rep. James Oberstar, D-Minn., introduced a bill
in Congress to study the affects of adding E15 to our fuel. 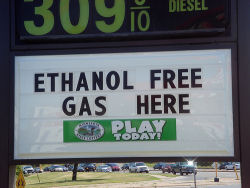 Opposition in growing all across the country to increasing ethanol content in
fuel. This sign was seen in Minnesota.

Soundings Trade Only, a leading boating industry trade journal, reported last week:
A bill headed to the U.S. House of Representatives calls for a study of blended
fuels in marine applications. H.R. 2652, the Maritime Safety Act of 2009, is sponsored
by Rep. James Oberstar, D-Minn., and Section 23 of the bill calls for the study.
The bill received a favorable report from the Committee on Transportation and Infrastructure,
which is chaired by Oberstar.
NMMA Leads the Fight

Boating industry officials are concerned about a request to the U.S. Environmental
Protection Agency that seeks to raise the amount of ethanol blended into gasoline
from 10 percent to 15 percent. The boating industry says it harms marine engines
and that no tests on the impact of E15 have been conducted.

"We think this is a good study, we think its doable and we think that in general
there should be more studies, research and investigation into the impacts of mid-level
ethanol and E10," Matthew Dunn, legislative director for the National Marine Manufacturers
Association told Soundings Trade Only. "We would be interested to see what the Coast
Guard could do and what they would find out based on the relatively narrow scope
here, which seems to be safety and consumer applications of blended ethanol," he
added. "But we would emphasis with respect to the federal government allowing a
new blend, like E15, that additional research would need to be done to make that
determination and it would need to be done by the appropriate federal agencies."
A Study Called For

The act appropriates $1 million for the survey and study.

Dunn noted that the study does not specify what kind of ethanol blends would be
studied, though the question today is should the government move forward with higher
ethanol blends, such as E15.

The EPA recently announced it was extending the comment period on the issue to July
20. The agency says it is required to make a decision by Dec. 1.