The Sea Ray L650 Fly is the flagship of the Sea Ray fleet of 39 models stretching down to 19’.

Yesterday afternoon, the Chairman and CEO of the Brunswick Corp., Mark Schwabero, announced that Sea Ray boat company would be sold. The company’s press release stated that the transaction is expected to be completed within the first half of 2018. This will likely be the largest U.S. boat company acquisition since Brunswick bought Sea Ray in November,1986 for $350 million – just a month after it bought Bayliner for $425 million. These two purchases made Brunswick Corp. the largest boat builder in the world. At the time, Sea Ray built boats from 14’ to 46’ and is said to have had annual sales of 28,000 units a year. Today, Sea Ray’s annual unit volume is about 10% of that number. 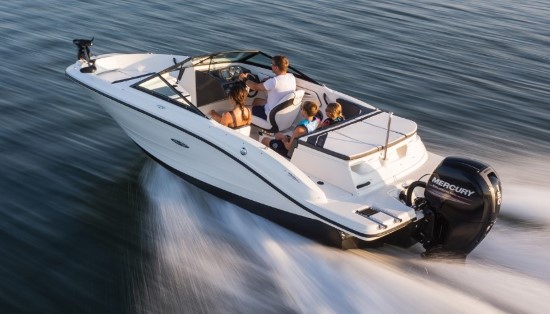 Sea Ray’s SPX 19 OB is the smallest boat in the Sea Ray line and exhibits the trend to outboard power, and away from sterndrive engines, which was Sea Ray’s mainstay.

Sea Ray Boats was founded by Cornelius Nathaniel "CN" Ray III, in 1959 in Oxford, Mich., at the dawn of the fiberglass boat-building era. When he sold the company in 1986, it had 4,500 employees and sales of $400 million.

In 2016, fewer than 2,500 Sea Rays were sold in the U.S., according to a reliable industry source. During a conference call after the announcement yesterday, a Brunswick spokesperson said that projected 2017 Sea Ray sales are $380 million and that volume in terms of units will be flat. Further, it was said that Sea Ray had been operating at a loss. 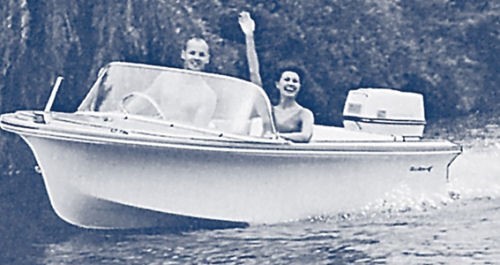 A vintage 1961 Sea Ray. The company got off to a fast start.

When Brunswick bought Sea Ray in 1986 the boat business was booming, as pent-up demand exploded after the austere years of sky-high interest rates. Boat builders expanded, and built boats as fast as they could -- until the market was literally glutted with new boats searching for owners. In the summer of 1989 dealers’ yards were full of unsold boats, and the party was over. But worse was to come.

In Sept. 1990, just before the November election, Congress passed the 10% luxury tax on new boats over $100,000. This was to demonstrate that Congress was out to soak the rich, not just the middle class. Unfortunately, virtually no one needs a boat, not even rich people, and they put their money in bonds, stocks, and elsewhere. The law was repealed a couple of years later, but not before dozens of boat builders – Trojan, Uniflite, Tollycraft, Pacemaker, Jersey Yachts – had gone out of business. The number of large boat dealers declined significantly, as life-long boaters simply gave up the sport as too costly. 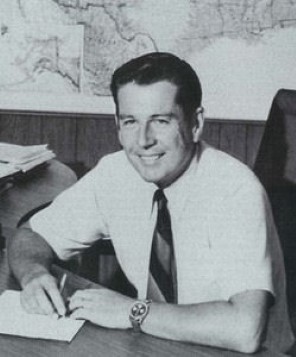 Boat Sales in the 21st Century

But the 21st century hasn’t been any better for boat builders. It seemed that every couple of years there severe bumps in the road for the boat business -- the bust of the Dot Com bubble, 9-11 and its aftermath, credit tightening -- and then, the industry’s coup de grace, the Great Recession. It took annual boat sales down to a trickle. Many boat builders with great old names, and long-established dealers, went bankrupt. Anyone with a large amount of debt found that cash flow could not cover it, and banks put these companies into receivership.

Sea Ray was a survivor as were a number of other brands, but the devastation of the recession took its toll on both the boat industry and the boat buying public. The industry survivors continued to keep up a good front, but behind the pretty magazine ads, and shinny new boats at the boat shows, only a skeleton crew of under-paid and over-worked company-faithful kept the boat companies functioning – something that goes on still today.

Phoenix from the Ashes

One would think with all of the bankruptcies, Sea Ray would have a lot less competition and could thrive. The trouble was that vulture funds, venture capitalists, private equity investors, hedge funds and just plain rich guys who like boats, swooped in and bought these brands for pennies on the dollar -- besides, “owning a boat company is a sexy business,” one M and A executive recently told us (along with vineyards.)

Few of the small boat old brands really went away for good. They live on with a few ads in the boating magazines and appearances in the big boat shows. They each sell a few boats, staying alive, and slicing the ever-shrinking market of buyers thinner for companies like Sea Ray, which has an infrastructure of engineers, designers and customer service personnel to support.

Consolidation. Now, instead of a brand having its own factory, staff and designs, as many as four or five brands are built in one factory by the same shop floor personnel, with everyone in the front office wearing several hats, and in some cases with the hulls the same under different name plates. It’s called consolidation.

At one time Sea Ray exported a large number of boats, in fact during some lean years in the U.S., foreign markets kept some boat companies alive. No longer, as Europe’s boat sales have been in the doldrums for years. So, it’s not surprising that European builders looked to the American market for their survival.

Azimut was one of the first foreign brands to successfully land on American shores in the 1980s, but few others got traction back then. But, the last several years has seen increased competition from Beneteau, Jeanneau, Bavaria, Princess, Sunseeker, Riviera, Galeon, Absolute, Ferretti and many others.

Just as boats sales began to climb back from the recession and Sea Ray was gearing up its L series of luxury yachts from 59’ to 65’, exotic foreign brands became more serious competition. All targeted Sea Ray because it had the largest installed base of owners in the U.S. While once moving up in the Sea Ray line was a given, increasingly its owners looked elsewhere at new options. 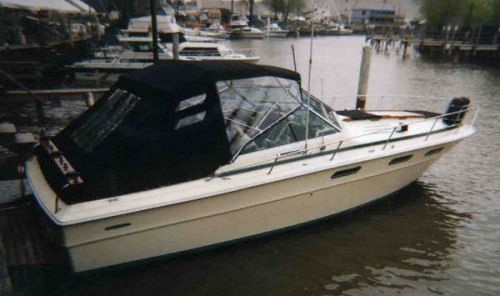 A 1974 Sea Ray 300 Weekender is still going strong. Sea Ray’s own used boats are perhaps its biggest competition – and they don’t go away.

The Trend to Outboards

While all of this was going on in the large-boat segment of the industry, the American boating public in the 2000’s increasingly viewed outboard engines as a desirable alternative to sterndrive power. At the same time, engine makers were building ever-higher horsepower outboards for larger boats. Indeed, Sea Ray recognized this shift fairly early on and introduced the 37’ Venture express cruiser which received phenomenal interest from the boating public. At the same time the company began re-tooling its smaller boats for outboard power, and today 8 of its 39 models are outboards.

The general public has always had a misconception of how many new boats are actually sold in the U.S. In 2000, there were 342,000 new boats sold in the U.S. – outboard boats of all kinds, inboard ski/wake boats, inboard cruisers, and sterndrive boats. Today, new boat sales, in the same categories, total less than half that number.

Hardest hit has been the sterndrive category – Sea Ray’s strong suit -- where industry-wide sales were 78,000 in 2000 and are fewer than 20,000 today. And, sales of inboard-powered cruisers are about 70% of what it was just 17 years ago. Both of these categories were Sea Ray’s bread and butter, and the markets had shrunk to a shadow of its former size.

During a post announcement conference call, Brunswick spokesmen emphasized that the company was trying to move away from the more cyclical aspects of its business and toward more resilient categories such as parts and accessories, distribution, and outboard engines.

The spokesman also said that Brunswick was fully supporting its other boat companies, most of which are largely outboard oriented. He also said that the company will “diligently support” Sea Ray, its dealers, customers and employees during its sale process.

METTAWA, Ill. - Dec. 5, 2017 - Brunswick Corporation (NYSE: BC) today announced it intends to sell Sea Ray, one of the 15 brands that comprise the Brunswick Boat Group. Lazard's middle market advisory group is acting as Brunswick's investment banker for this transaction, which is expected to be completed in the first half of 2018.

"Our marine strategy is focused on developing, manufacturing and distributing market-leading products to recreational and commercial marine consumers through our portfolio of engine, boat and parts and accessories businesses," Brunswick Chairman and Chief Executive Officer Mark Schwabero explained. "This decision was made after careful consideration, and reflects the evolving contribution that the Sea Ray brand has made to our marine portfolio.

"Our remaining brands will continue to be important elements of a robust, balanced marine business, with our boat portfolio serving healthy, expanding market segments," Schwabero explained. "This more focused strategy will provide the best opportunities for growth and will complement our other marine offerings, including engines, parts and accessories. This shift will also improve our risk and margin profile and is consistent with our commitment to drive shareholder value.

"We believe that the Sea Ray business, through its leading brand and exciting product line, offers attractive value creation opportunities to a new owner," Schwabero added. "Sea Ray is an iconic brand that is rich with history, with a reputation for craftsmanship, quality and styling. Sea Ray's manufacturing facilities are among the most advanced in the marine industry, with talented and dedicated workforces."

During the sale process, "we will continue to diligently manage Sea Ray by executing its business and product plans in support of our dealers and customers," Schwabero concluded.

Brunswick will report the results of Sea Ray, as well as its Meridian boat brand, as discontinued operations for accounting purposes going forward. Finally, Brunswick is reaffirming its recent EPS guidance and target ranges for 2017, 2018 and the 2020 plan.

To listen via the Internet, go to ir.brunswick.com. Please go to the website at least 15 minutes before the call to register, download and install any needed audio software.

Certain statements in this news release are forward-looking as defined in the Private Securities Litigation Reform Act of 1995. Forward-looking statements are based on current expectations, estimates and projections about Brunswick's business and by their nature address matters that are, to different degrees, uncertain. Words such as "may," "could," "expect," "intend," "target," "plan," "seek," "estimate," "believe," "predict," "outlook" and similar expressions are intended to identify forward-looking statements. Such statements are not guarantees of future performance and involve certain risks and uncertainties that may cause actual results to differ materially from expectations as of the date of this news release. These risks include, but are not limited to: adverse general economic conditions, including reductions in consumer discretionary spending; negative currency trends; our ability to complete and integrate targeted acquisitions; our ability to implement our strategic plan and growth initiatives; adequate financing access for dealers and customers and our ability to access capital and credit markets; maintaining effective distribution; retaining our relationships with dealers, distributors and independent boat builders; credit and collections risks; retaining key customers; protecting our brands and intellectual property; absorbing fixed costs in production; managing expansion or consolidation of manufacturing facilities; meeting supply objectives; meeting pension funding obligations; managing our share repurchases; higher energy and fuel costs; competitive pricing pressures; developing new and innovative products at a competitive price, in legal compliance; maintaining product quality and service standards; outages or breaches of technology systems; competitor activity; product liability, warranty and other claims risks; increased costs of legal and regulatory compliance; having to record an impairment to the value of goodwill and other assets; international business risks; attracting and retaining key contributors; and weather and catastrophic event risks.

Additional risk factors are included in the Company's Annual Report on Form 10-K for 2016. Forward-looking statements speak only as of the date on which they are made, and Brunswick does not undertake any obligation to update them to reflect events or circumstances after the date of this news release or for changes by wire services or Internet service providers.