The Downeast design is executed nicely on the 248 Islander with a pleasurable comfort level. It’s a good combination of workboat and pleasure craft that has a lot of appeal. 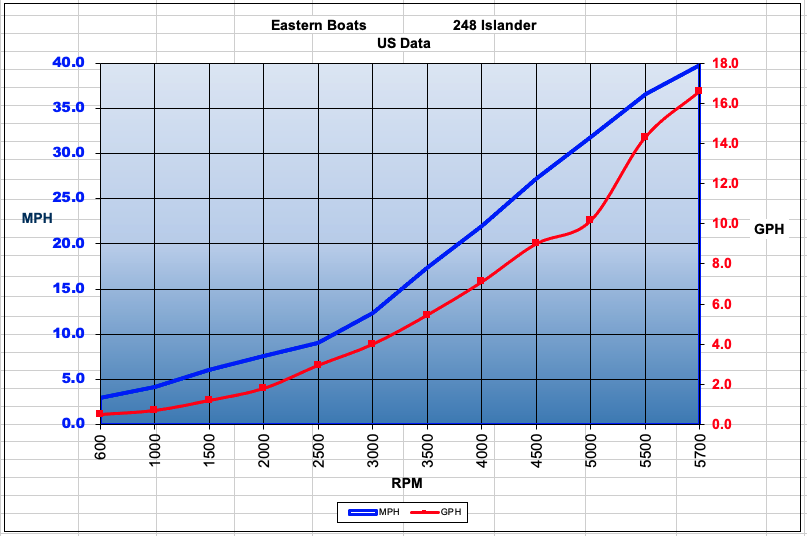 Eastern Boats is a company that started out making commercial boats and then morphed into making its designs for the general public.  When a company does something like that, you still get the strength of build, the quality, the lines and the handling characteristics carried over into the recreational market.  It’s a win/win, and mostly for the customer.  Commercial boats must withstand a higher level of punishment brought on by near-daily use and hard work on the water.  So, when we see a situation such as this, we tend to take a little more of a forensic look at the end result.

With the 248 Islander, my first glance revealed that it still has that workboat utilitarian look to it.  That is to say, we don't have the Teak and Holly sole, we don't have the finished teak caprail, items along those lines. Certainly, you can get them but then the question becomes why would you?  With its workboat character still intact, this is an easy to maintain boat, and to my eye, that's what's so appealing about it.

Now it's important to note that I've been on a lot of boats, and there oftentimes seems to be a compromise between having functionality on the deck or space, not both. But the 248 Islander seems to present a nice balance between the two.

The main deck consists of a bench seat across the transom plus opposing seating just ahead and to port that accommodates a cooler underneath.  The 248 Islander is also available with an open layout to accommodate deck chairs.  With this layout, the seats are molded in and they’re in the form of modules so customers can replace any or all with any kind of a change desired.  Choose from L-seating in the front, delete the back seat… just let them know and it’s done.  Naturally, there’s storage underneath each seat and one of the things I might add would be some grab rails along the sides, and Eastern again would be happy to accommodate.  There's a removable pedestal table just ahead of the transom bench seat.  The opposing seating just ahead makes for an intimate gathering onboard.

Another nod to the utilitarian quality of this former workboat design is a fuel filter, a priming bulb and the battery switch positioned in the bulwarks under the starboard caprail.  All are easily accessible and unapologetically out in the open.  It’s certainly not in the way of anything but, the point being, there’s now no requirement to dig way down into a hole somewhere just to change the fuel filter.  In the center of the cockpit deck is a hatch held open by a gas strut with plenty of storage inside.  The little pull-up knob was a bit difficult to use, so a switchover to a lift and lock latch, or even a turn and lock, would be appropriate.

Ahead and to port, there’s a bit of a galley-up arrangement with a solid surface counter.  There are raised teak fiddles, a stainless-steel single basin sink and refrigeration underneath.  The open counter can remain as a serving area or opt for either an electric or propane grill.

Just to the port hand side of the forward seat, there’s a 30-amp shore power connection.  What is it connected to?  In the case of this layout, it's a dual-voltage refrigerator and a battery charger along with some 110-V outlets located around the boat.   And of course, the big item that we could get, but is not on our test boat, is air conditioning and heat.

Continuing with the pilothouse area, we start with the helm seat that swivels around to join the seating just behind.  It’s also on a slider, includes a flip armrest and it's amounted to an 18” (45.72 cm) platform acting as a footrest.  Underneath this platform is open storage.  The hardtop is 6’7” (2.01 m) off the deck, and while this area also maintains a little bit of the practical and easy to maintain features, there are still some nice touches of nautical flair by way of teak trim.

But what is most noticeable is the ventilation capabilities.  The two side windows open, as well as the two forward windows that open up all the way to the horizontal.  So too can we close all these windows, plus there’s a standard enclosure that goes all the way across the back creating a distinct comfort level in the shoulder seasons.  It should also be stated that the ease of use continues with these windows in that they're all manually opening.  No button pushing… no electrically actuated… nothing to fail.

The helm is starboard side-mounted and presents a clean and uncluttered look to it.  There’s room for a 9” (22.86 cm) display in the center.  Electrical switching is to the left-hand side.  There are only two gauges… a tach and fuel.   Bow thruster and trim tab controls are up ahead along with the windlass control and the throttle and shift binnacle is over to the right-hand side.  The steering wheel is mounted on the vertical and it has a steering nob that's going to come in handy, and the wheel drives hydraulic steering.

There’s a molded-in footrest with teak treads and below, at deck level, are two hinges that allow the whole console to tip back with the release of two latches.  This makes for easy access for electronics installation and certainly any maintenance.  I already mentioned that there are opening side windows, but this starboard one also allows for easy access to a midship cleat facilitating short or single-handed tie-ups.  To port, the observer gets a 33” (83.82 cm) wide seat with a flip-down footrest.  A trash receptacle is just underneath and accessed from the side.

The bow area is strictly for line and anchor handling and as such, the side decks are 12” (30.48 cm) wide.  The rails come up 20” (50.8 cm) and they maintain that height all the way up to the inclining foredeck.  For safety, there are teak grab rails both low and high.  Fully forward, there are two 10” (25.4 cm) cleats that flank a Lewmar Pro Fish windlass.  The anchor is resting on a roller mounted on top of the deck.  Because this was originally a workboat design, there's a collision bulkhead behind the rode storage.

The 248 Islander also serves as a functional weekender, and as such, there’s a comfortable cabin for the overnights.  A bi-fold door opens up and leads us to the cabin area.  There's V-style seating and a filler cushion will convert it into a berth 80” (203.2 cm) long by 80” (203.2 cm) wide at the stern, tapering to 17” (43.18 cm) fully forward.   Headroom is 58” (147.32 cm) with 39” (99.06 cm) over the berth.  There's a hanging locker to port with shelf space above surrounded by a teak railing.  There’s a battery switch at the forward end of the seating for the bow thruster.  There’s a marine toilet that we can get as a porta-potty or a ceramic toilet.  Shelves to both sides of the berth are trimmed in teak and there's plenty of ventilation from opening portlights and an overhead hatch.

At the stern, there’s a 28” (71.12 cm) deep swim platform with a reboarding ladder to the port side.  The engine is a 150-hp Yamaha four-stroke.  Eastern will supply any brand and of course options to go higher than 150.  But… this boat isn't really about getting it into a higher speed.  It's a Downeast design, so it's more comfortable with a 150.  With a larger engine, the boat is going to be trying to oppose the seas rather than accommodate them.  And it does that quite well.

This boat is a flat-out absolute joy to drive.  She’s not a speed demon and slowing down to sedate cruising really improves things.  Yes, she'll go almost 40 MPH but that's not what this boat was intended for.  Drop her into the high teens/low 20s and cruising takes on a whole new meaning.  Turns are sedate but make yourself aware that hard turns to port will completely block visibility as the hardtop drops down into the line of sight.  Not a big deal, but clear the turn before initiating.

Back at the dock, if the wheel is turned hard over, forward will turn the boat while reverse will pull the stern in the direction you want without turning the whole boat.  It’s basically a short and gentle side maneuver and a touch of the powerful bow thruster has her walking right over to the dock.  Now I said “just a touch of thruster.”  It’s powerful, so more is too much.

Options to Consider and Pricing

This was one of those boats that I just didn’t want to leave at the end of the day, and that doesn’t happen often.  I am a fan of the Downeast design and here it’s executed nicely with a pleasurable comfort level.  It’s a good combination of workboat and pleasure craft that has a lot of appeal.  I think it’s summed up well in the test and review video with the term “gentleman’s lobster boat.”  I couldn’t have said it better myself.