The MCY 76 Skylounge is the second model in the manufacturer’s Skylounge series. The enclosed flying bridge adds a third climate-controlled gathering area and having the helm on the upper level opens up the salon. Her open bow is one of the most spacious in class and she sleeps eight belowdecks.

Monte Carlo Yachts’ 70 Skylounge was received so well that the manufacturer expanded the line with a new flagship, the MCY 76 Skylounge. The helm is in the enclosed flying bridge, which offers panoramic views for passengers seated on the aft lounges. On the main deck, an owner can choose forward or aft galleys and belowdecks, the full-beam master stateroom is amidships separated from the VIP quarters in the bow by two guest cabins.

The Skylounge. Let’s start at the top. The Skylounge is accessed via stairs forward to starboard that lead up from the salon. Having the stairs indoors rather than outside provides for safer passage. To port within the climate-controlled skylounge is a sofa-style lounge with a table in front. Opposite, our test boat had a small office area with a desk and a chair that was requested by the owner. MCY will also put a bar or loveseat-sized lounge in this area. Overhead, the hardtop opens to let in natural light. Forward, the helm has twin high-backed captain’s chairs. The seat that’s positioned in line with the steering wheel has controls for the engine displays and for the autopilot on the armrests. The dash has triple Raymarine multifunction displays with a compass between the center unit and the steering wheel. Engine controls are to the right with thrusters to the left. Stainless-steel-framed sliding doors access the open-air aft deck that has move-able furniture plus a bar with a grille.

The Bow. Working our way down, a Portuguese bridge leads to the MCY 76 Skylounge’s bow. Two large lounges flank a central passageway and tables on each side are on robust bases. They can be lowered and filled with cushions to create extra-large sunpads on each side. Forward, the windlass is centrally positioned, and hatches on each side open to access the rode. The anchor passes through the stem and there are large cleats on each side with chocks and scuff plates ahead.

The Stern. Working our way down the side decks, stairs on each side lead aft to the hydraulic swim platform that can be lowered into the water to facilitate tender loading or create a private beach area. The MCY 76 Skylounge can be configured with a tender garage or the area can be customized to an owner’s preference.

The Aft Deck. Gates close the passage from the swim platform to the aft deck where we found a forward-facing lounge across the stern with a solid wood table on a fixed base just ahead. Movable deck chairs provide flexible seating for al-fresco dining. Outboard on each side are warping winches and ahead, glass inserts between the deck and the underside of the skylounge protect the area from wind and weather.

The Salon. Monte Carlo offers the MCY 76 Skylounge with a choice of galley locations. Our test boat had the galley aft, which sacrifices a formal dining area but positions the galley between the aft deck and the salon so it can serve both for entertaining. Located to port, the galley has a full complement of modern appliances, a large side window and a plethora of storage options. To starboard is a long credenza that can serve as a buffet area. A smoked glass partition separates the galley from the salon and farther forward is a raised horseshoe-shaped dinette that provides excellent views out the windshield.

The Master. The stairway to the accommodations deck is just abaft the skylounge stairs to starboard. At the bottom, turn left to enter the full-beam master stateroom that has a king-sized berth on the centerline with dresser-style drawers outboard on each side and a walk-in closet to starboard. The entry to the head is to port.

Guest Accommodations. On each side of the companionway leading forward from the master stateroom are guest cabins with twin berths and en suite heads. In the bow, the VIP cabin has an island berth with hanging lockers aft on each side and the entry to the head aft to starboard.

Crew Quarters/Engine Room. Access to the crew quarters is from a hatch in the starboard-side deck. The laundry room is off the crew accommodations and a watertight door leads to the engine room. Monte Carlo Yachts powers the MCY 76 Skylounge with twin MAN V-12 diesels rated at 1,550 or 1,600 hp each. The more powerful engines reportedly push the boat to speeds exceeding 30 knots.

The MCY 76 Skylounge is the second of four models the manufacturer is planning for the new Skylounge series and it makes sense to us. Enclosing the flying bridge adds a third gathering area and creates a boat that can be used year-round with the engine room and the stairs that lead to its helm being located indoors. Additionally, having a choice of galley locations should appeal to a broader scope of customers. 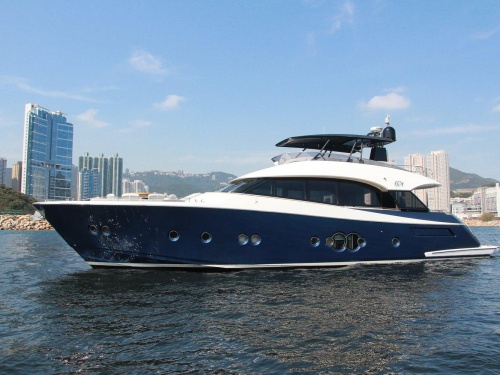 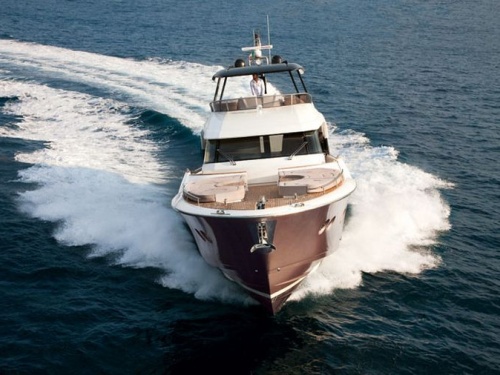 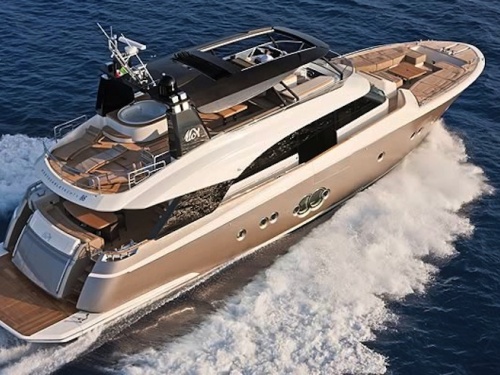 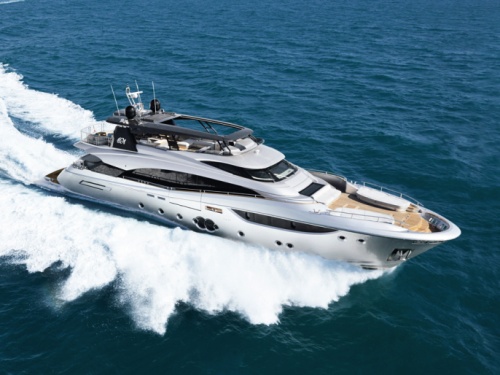