Recently, Monte Carlo Yachts announced the introduction of its newest creation — the 105 (32 m) motoryacht. This is the first MCY over 100' and she follows the exterior styling and aerospace construction methods pioneered in the company's four earlier models that range from 65' to 86' (19.8 m to 26.2 m). Again, Carlo Nuvolari and Dan Lenard were the naval architects. The builder offers virtually unlimited customization possibilities within the confines of its exterior shell seen above. 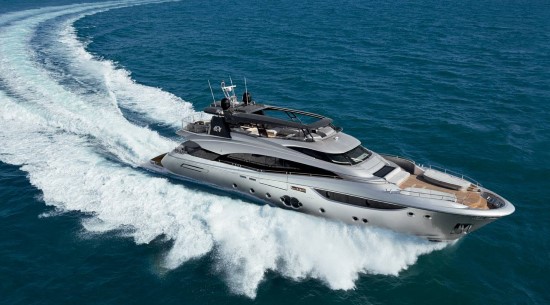 The first Monte Carlo Yachts 105 is scheduled to be launched in the summer of 2015 and already the first hull has been sold. The image above has been computer-generated. 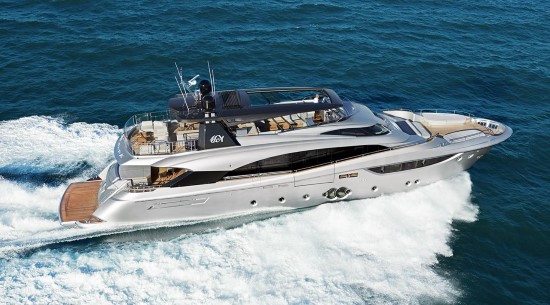 The lines of the Monte Carlo Yachts have proven themselves to be popular all over the world and the distinctive exterior styling is at once recognizable.

The 105 will be the 5th new large yacht introduced by Monte Carlo Yachts within five years, and the first one with a separate pilothouse. That, together with the main deck owners stateroom forward, give her two important signature attributes of large, custom-built motoryachts. Her beam is 23'4" (7.12 m), which is one of the greatest in class.

Light But Strong. The folks at MCY tell us that the new 105 will be laminated with 8,800-lbs. (4 t) of Kevlar and carbon fiber and her decks will be supported by 1,760 lbs. (800 kgs.) of aluminum beams. These materials plus the vacuum infusion lamination process and the coring strategies used in the Monfalcone, Italy plant will allow her to be "15% lighter than the market reference", according to the builder, who has yet to disclose her displacement.

Speed and Fuel-Efficiency. Of course reduced weight translates into higher speeds from a given pair of engines and better fuel efficiency at cruising and displacement speeds. MCY has established itself as a builder which aims for a high top speed for its vessels, but not the highest possible. The reason is that in order to push a boat of this size much faster than 30 knots requires either a narrower beam or prodigious horsepower -- or more likely both. Most veteran motoryacht owners we know agree that high speed for speed's sake is a fool's errand, best left to one-off builders with eccentric clients. 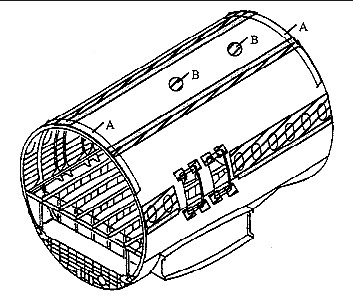 Monocoque (/ˈmɒnɵkɒk/ or /ˈmɒnɵkoʊk/) is a structural approach that supports loads through an object's external skin, similar to an egg shell. The term is also used to indicate a structure in which the skin provides the main structural support. For example, most commercial airliners use a monocoque design for the fuselage as seen in the image above.

Highly Customizable. Because MCY uses an aerospace monocoque structural concept, the hull and the deck provide most of the vessel's strength, thus reinventing the structural bulkheads and flooring with innovative materials. This allows the builder to be able to offer customers virtually any interior layout that they want. A secondary advantage of this construction concept is that high, longitudinal stringers can be reduced, allowing the actual living spaces to be lowered somewhat in the vessel giving her a more sleek profile.

Typically, the interiors of most motoryachts in this class are built in situ. Anyone who has ever visited a yard where boats in this size are built knows the scene of workers climbing up scaffolding, then down ladders into the hull of the boat, then maneuvering through the fixed bulkheads to install absolutely everything that goes inside. On boats this size, 100,000 man-hours or more are usually needed. A large percentage of those hours are expended on workers just moving around, and squirming to get into hard-to-reach spaces.

Fast Construction Times. It is for this reason that even fiberglass boats of this size can take from one to three years to complete and are terribly expensive. Because of MCY's monocoque design the interiors of its boats are built in modules outside the hull on the shop floor where the craftsmen can attack all four sides of a project at once with tools and materials easily at hand. Not only is critical work done faster, it is also done better because the installations are not done in confined spaces. Wiring and plumbing is designed to be "plug-and-play". This all results in a tremendous savings in human effort. MCY says that the 105 can be built with just 40,000 man-hours. 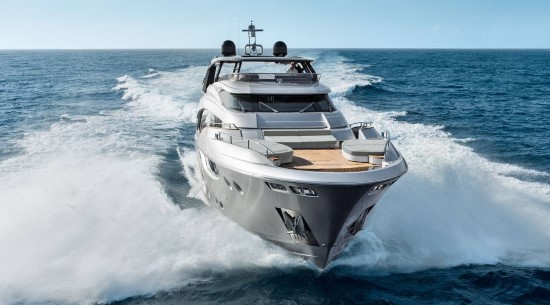 The high bow and imposing bulwarks of the Monte Carlo Yachts 105 should appeal to any boater looking for a large motoryacht with gravitas.

Time Waits for No Man (Even Rich Ones). Most people we know that buy boats of this size usually want the boat "now", either because they are getting on in years or because there is a significant family event they want to celebrate aboard a new, large motoryacht. Because of MCY's building concept, several boat interiors can be built at the same time and be ready to be dropped into the hull once lamination is completed -- thus saving even more time for the customer in a hurry.

For most people the overall style and looks of the boat are the most important factor in making a purchase decision. If a new yacht is ugly, or out of date, or too radical in design, most people we know in this income category don't want it no matter how low the price. (The used boat market is awash in yachts with these failings.)

The MCY Look. Several years ago MCY commissioned the internationally-known, award-winning design team of Nuvolari & Lenard to create the "MCY Look". It had to be distinctive, yet not ostentatious or contrived. The N&L creation was tested first on the MCY 76 over three years ago, then on three other models from 65' to 86' (19.8 m to 26.2 m) that have been introduced in the meantime.

In just four years MCY's four models have shaken up the fiberglass megayacht industry like nothing that has come before. By creating a distinctive look that was not too radical or "flavor-of-the-month", and one that was anchored in practical motoryacht function accented with classic design cues, yet was obviously modern MCY captured the imagination of discerning yacht buyers all over the world. The "MCY Look" speaks for itself and its world-wide acceptance is obvious in the size of Monte Carlo Yachts' order book. 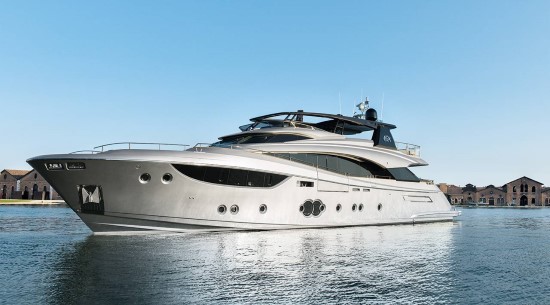 Monte Carlo Yachts offers virtually unlimited options for interior décor materials to suit the taste and culture of any customer.

The Right Style at the Right Time. Often people don't quite know why they like the lines of the MCY models, so let us explain several of the subtle, or even subconscious, reasons. First of all, it is not an old-fashioned "wedding cake" design with one deck stacked on top of another. Second, it is not a "wedge" of angular lines that came out of the Turin automobile coach design houses in the 1970s and '80s, and has now become tired. Third, it is not a classic, Northern European design that harks back to the early days of megayacht construction in the 1960s and '70s when boats of this size had horizontal straight lines which were conservative, sober, and to many customers' eyes today, a bit boring.

Demanding it All. People who buy 100' (30.5 m) boats can be demanding. For example, some of the things that they often want is a master cabin on the main deck, a raised pilothouse and Portuguese bridge, lots of large entertaining spaces, and a yacht on three decks not on four, in order to minimize climbing. To get all of this into a 105' (32 m) motoryacht that doesn’t look like a pregnant whale can be a challenge. But the MCY and N&L design collaboration has been able to incorporate all of these requirements -- and many others -- into a yacht that is low, sleek and graceful-looking, at least to our eye.

We look forward to learning more about the Monte Carlo Yachts 105 as she goes through her gestation period. 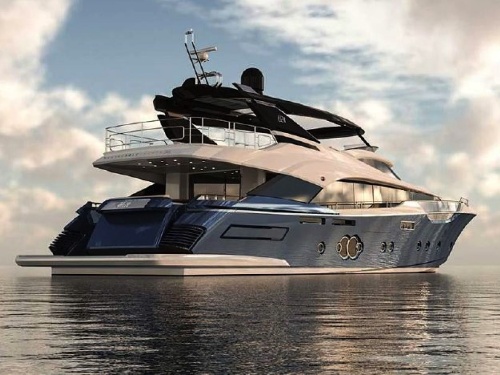