Dauntless is Boston Whaler’s bay boat line and is a more versatile platform than its Outrage line of center consoles, which are primarily designed for offshore fishing. The new Boston Whaler 250 Dauntless replaces the 240 Dauntless for 2021 and is a keel-up redesign that was focused on making its ride more comfortable in choppy conditions. 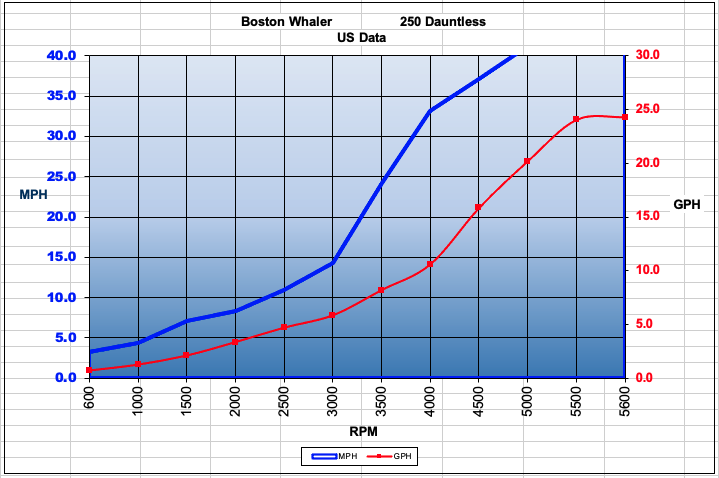 The layout on the 250 Dauntless has more people-friendly seating for up to 10 passengers and can even handle watersports duties. Though it has enough fishing features to satisfy avid anglers, it’s designed to be a multi-purpose boat best-suited for inshore waters but with more capability than most bay boats.

The hull of the 250 Dauntless is 25’ 8” (7.09 m) and is one foot longer than the 240. The 250 has an 8’ 6” (2.59 m) beam for maximum cockpit space without the need to jump through wide-load trailering hoops. With a deadrise that increased from 16 to 18 degrees and a sharper entry, she sliced through the waves cleanly. Hard turns were very stable and predictable, and no spray entered the cockpit thanks to features like the newly increased bow flare. The optional Active Trim system kept her trimmed properly no matter what speed we went and when we threw the 250 into a turn, the slight reduction in speed automatically trimmed the Verado down for better traction. 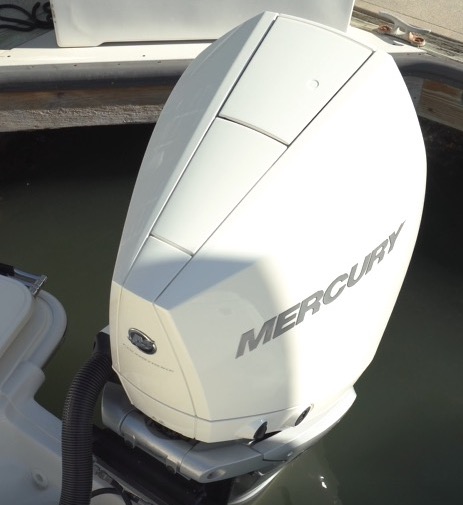 At the stern, the biggest improvement was to make the rear casting platform larger and all one level. The swim “platformettes” extend past the engine well and angle outward, which places the starboard-side, four-step boarding ladder farther away from the outboard’s lower unit for safety. Underneath the ladder is a hatch that gives access to one of two standard batteries. Under the companion hatch on the port side is the other battery along with plumbing fixtures and the battery selector switch, which is a little hard to access.

The twin stern jumpseats are a new design that allows the rider to sit higher for better ergonomics thanks to the thick seat bottom that’s held in place with forward snaps and magnets toward the rear. When it’s time to fish, the seat bottom can be removed, revealing a hatch lid underneath that when flipped forward creates a place to stow the seat bottom and backrest, which flips down into the recess and is hidden when the hatch lid is closed.

In between the twin jumpseats is a 35-gallon (132.49 L) livewell that has a lid that’s held open with a strut and is gasketed to avoid splashing water into the cockpit when running. The livewell is insulated and can be used as a cooler when in recreation mode.

An optional freshwater shower supplied by a 12-gal (45.42L) tank resides at the transom near the starboard jump seat and there’s a fixture for an optional raw water washdown within the engine well.

Our test boat had the optional 42” (106.68 cm)  wide leaning post that has flip-up bolsters to allow the driving crew to stand or sit, and there are twin armrests that can be flipped up out of the way. The back of the leaning post has three drawers on the left for storage and a large cabinet to the right that has dedicated storage for a 5-gal (18.93 L)  bucket. On top are four Yeti-ready cupholders and two rod holders.

The standard leaning post has a reversible backrest that locks in four positions and a cooler is underneath. There’s also an option to add another livewell.

We measured 23” (58.42 cm) of cockpit depth at the stern that increases to 25” (63.50 cm) inches farther forward. For added safety, there are low-profile grabrails fore and aft and on the side of the console. The gunwale cap rail measures a minimum of 6” (15.24 cm) wide and has non-skid all around.

Whaler designers used D-rails that are integrated into the console to support the hard top. Though more expensive to manufacture and install, they help create an unobstructed, 20” (50.80 cm) walkway space on either side of the console that is among the roomiest of many larger center consoles we’ve tested.

The helm’s dash has enough real estate to mount a 12” (30.48 cm) multifunction display (MFD) in front of the operator and another 9” (22.86 cm) MFD to the right (our boat had a glove box) with enough room left over for a VHF radio, a Fusion Stereo head unit, Mercury VesselView display and an accessory panel with lighted rocker switches.

On top of the console is a recessed area covered in SeaDek that’s perfect for tossing loose items like cell phones and wallets. There are two USB plugs: one for charging and another to connect with the stereo and there’s also an induction charging plate for newer smartphones.

Our test boat had the optional hardtop that was color-matched to the hull’s Glacier Green gelcoat. There are four other gelcoat colors available including the standard white and 11 painted hull color options. The supports are powder-coated, and an owner has a choice of white or black. The hardtop has an overhead light, readily accessible storage for life jackets and four rocket-launcher style fishing rod holders along with a ski tow attachment in between to add to this boat’s versatility.

Access into the center console’s 52” (132.08 cm) high head compartment has been improved by widening the top of the door to 18” (45.72 cm) so the shoulders fit though more easily and there’s a standard Porta-Potti with pump-out within.

In front of the center console is a new double-wide loung with flip-down armrests, which is a feature usually found only on much larger boats. The lounger creates a 27” (68.58 cm) x 30” (76.20 cm) storage compartment underneath that is tall enough for scuba tank storage racks and has a fishing rod butt holder for storing rods up to 7’ (2.13m) long (the tips protrude into the head compartment).

All of the upholstery has been upgraded on the 250 Dauntless and features denser foam for better support along with more upscale vinyl and double stitching.

At the bow is another sun lounge fitted with only two cushions that can be removed to form a large bow casting platform. There is a pair of flip-up backrests to form chaise lounges and unlike many boats, there’s enough backrest angle for extra comfort, which is true of every seat on this boat.

Underneath the cushion is a large insulated compartment that’s perfect for holding the catch of the day.  There’s an anchor locker but we’d like to see a cradle to prevent the anchor from scratching the gelcoat-finished interior. There’s also no bow cleat for tying off the anchor line but this can be remedied by ordering the optional bow roller. An optional sunshade, supported by carbon-fiber poles, keeps the bow section cool on blazing days and is recommend for family use.

Kudos to Boston Whaler for offering such a wide range of power. While 250 seems like too little, 400 hp seems like overkill. Although the Verado 300 was a good match, having 350 hp would push this boat’s top speed into the 50s and would give the extra performance needed if the passenger load came close to its 10-person maximum. Because of the superior flotation designed into all Boston Whalers that give them level flotation when swamped, the 250 Dauntless is a great choice for safety-conscious buyers. This boat will appeal to casual inshore anglers and will give them the confidence to go offshore when conditions are moderate. 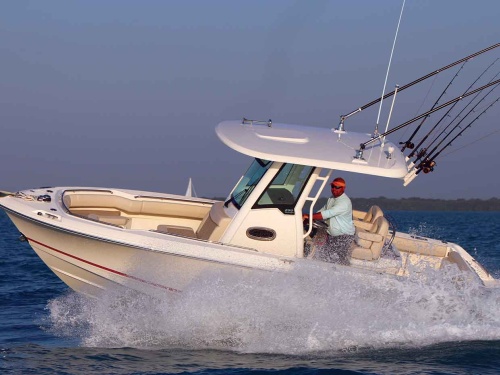 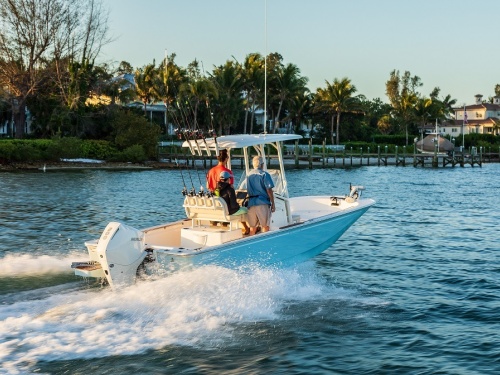 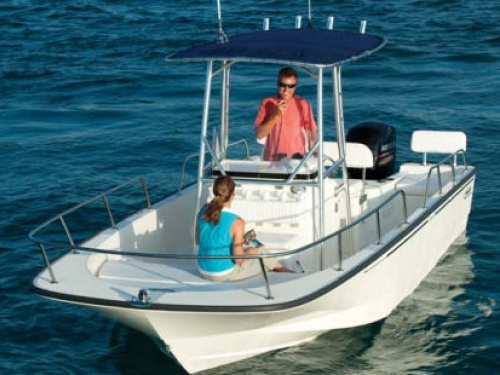 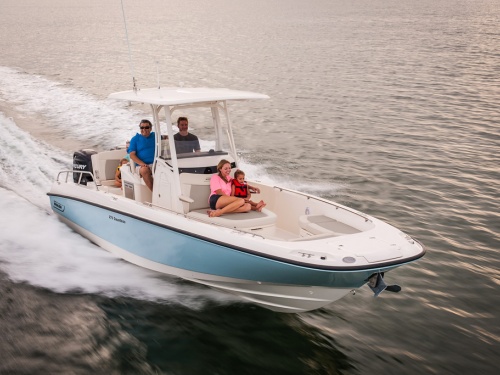