Until last year when Boston Whaler introduced its new 370 Outrage, the 345 Conquest was the largest boat in Whaler’s fleet. While we and just about everyone else have been raving about the 370 and all of the innovations that are built in, it is easy to forget that the Whaler 345 Conquest is still a lot of boat and able to go virtually anywhere that one would take the new 370 – and possibly in even more comfort. As you can see in the picture above, the 345 Conquest has a very unusual coupe design that keeps you out in the fresh air but protects you from wind and spray. The 345 is the largest Whaler in the Conquest line and is not a walk around like its smaller siblings, but has grown into an express cruiser. We think it is an exciting concept in this size and type of boat.

The 345 Conquest is designed for serious long-distance cruising to exotic fishing spots or a deserted sandy beach in places like the Turks and Caicos. (Nassau to the Turks on one tank of fuel is possible at best cruise.) With this boat you can think big.
The Boston Whaler 345 Conquest is built with the same Unibond construction the company has been famous for since day one. Yes, it’s unsinkable and yes, you can probably saw one in half and float around the harbor on it if you want to. But at a base price of $347,709 with twin 300 XXL Verados you might want to take out your aggressions on something cheaper.
Now, that you have caught your breath over the price, let us hasten to add that with the 345 boat Boston Whaler has entered into a different class of boat than it has ever built before. The 345 is not a walk around like the rest of the Conquest series, nor is it a center console on steroids like the newer 370 Outrage. Rather, it is an outboard-powered express cruiser. Further, she is designed and built to handle blue water and go long distances in sloppy conditions.

The 345 Conquest is more fuel-efficient with the three 250-hp outboards shown here, than with twin 300s.

To our way of looking at things, this is a bold departure for Boston Whaler. In most respects this boat is much more of a radical departure than the 370 Outrage, and it is a boat that we would much rather take for long-range cruising or deep-sea fishing. Suffice it to say the Conquest is one of the best-built boats you’ll find in class, and she is one of the few (if any) 34’ express cruisers on the market that claims to float level if swamped. Boston Whaler says that its 345 Conquest can be swamped and still support 4,900 lbs. (2222 kgs.) of weight (such as passengers and gear). That single attribute provides an incredible amount of peace of mind to anyone wanting to take their boat on some serious blue water trips.
In addition to unsinkable build, the 345 is also loaded with equipment that almost never comes standard in boat of this type and size, things like a diesel generator, A/C, and bow thruster. (FYI – Whaler’s bow thruster is a new patent-pending design that eliminates the tube in the bow of the boat.) You can even have Whaler install electronics for you off of its option list, so then all you need to go fishing is your gear and soda.

This view gives you a good idea of the size of the interior. By the looks of things, Harry might want the forward berth all to himself, and that sweet thing on the right could sleep on the dinette bench seat which makes into a bunk – or in the mid cabin.

Boston Whaler designers enclosed the bridge deck and helm with a no-nonsense pilothouse or coupe – when something like this comes along one never knows quite what to call it at first. In any case, whatever you call it, this enclosed bridge area will keep things cozy (or livable, at least) even on winter’s margins in the Pacific Northwest, southern Alaska, in Maine or Georgian Bay. We like any new idea that can extend the boat season, or make boating more comfortable for Mom and the kids in northern latitudes where you can get a cold day in the middle of August. Conversely, if you are in the tropics in August, you’ve got the A/C. Full marks to the Whaler design team on this one.
Obviously, this permanent hardtop and enclosure looks a lot better, and is a lot more durable than having some sort of jury-rigged cruising canvas with isinglass. You can’t have windshield wipers with isinglass, so what to you do in a heavy down pour or when you are powering to windward in stiff breeze and you are taking sheets of spray every five seconds? If you are a serious boater – either cruising or fishing – the 345 Conquest is a boat to be considered.

The gun rack is handy and decorative as well. The boat can sleep five people.

The centerline helm has room for mounting two 15” multifunction screens. Two overhead hatches provide a breeze when running. Windshield washers, integrated stereo speakers and six rod holders are standard. The center windshield has a full pane of safety glass and it opens outward by electric actuation to provide breeze at the helm. The aft “bulkhead” is a curtain rather than a solid door, so in warm weather the cockpit and bridge can be made almost one space by rolling up the canvas.

The cockpit is a fisherman’s paradise, with four gunwale-mounted rod holders and three more across the transom. Coaming bolsters are standard, as is a prep center with a sink, cutting board, carry-on cooler and lots of stowage space. There’s a refrigerator/freezer in the cockpit, too. A hot/cold shower is also standard.
The cool thing about Boston Whaler is that they put all this stuff aboard as standard equipment, so the base price doesn’t take off into the stratosphere when you actually start to equip the boat; most of the equipment you will want is already included.

Pretty much a typical galley for this size and type of boat.

Below decks, the Conquest is set up for comfortable cruising, with a centerline island berth forward and U-shaped seating under the helm that easily converts to another double. A settee, usually seating for the table, becomes a single berth when necessary. There’s more rod stowage here, too. The galley includes a microwave oven, 12v/120v. refrigerator, electric cooktop and coffeemaker.
You’ll find a VacuFlush toilet in the head, plumbed for both dockside pump-out and overboard discharge. For entertainment, there’s a 20” flat screen TV, Clarion stereo and Sirius satellite radio receiver. What’s not to like?

Power by Mercury, Of Course

Since both Boston Whaler and Mercury outboards are owned by the same company – the Brunswick Corporation – it is not surprising that Whalers come equipped and rigged only for Mercury power. Twin 300-hp Mercury supercharged Verado four-stroke outboards are standard, but if that’s not enough you can opt for triple 250s (adds $30,119). If, for some reason, you want triple 300-hp Verados, the boat is rated to handle them.
We have not tested this boat so we can’t give our 3rd-party performance measurements and Captain’s appraisal of handling, ergonomics and other issues. The kind folks at Whaler tell us that the 345 Conquest with the twin 300-hp Verados will produce a WOT of over 37 knots (and, 46 knots with triple 300s). Whaler says that its best cruise with the twin 300s is 22.5 knots and gets .72 nmpg (2.7 lpnm).
The triple 250s are actually more economical at cruise, according to Whaler: At 4000 rpm, the boat runs at 24.7 knots and burns .96 nmpg (3.6 lpnm), for a cruising range of about 390 nm, with a 10% fuel reserve. That is very good range, indeed, for this type of boat, thanks to its 421 gallon (1599 L) fuel capacity. 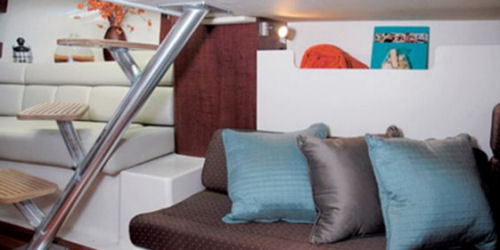 This is the mid cabin tucked in under the bridge deck as is standard design on an express cruiser.

Top end with the three Mercs is 44 knots, Whaler says. In either case you get an 8-kW diesel generator with a 15-gallon fuel tank, a 4-kw bow thruster, cockpit and cabin A/C, dockside water hookups and dual 30-amp shore power inlets with isolation transformers. The way Whaler has rigged the 345 Conquest, you can buy the base boat, add electronics and go; it’s ocean-ready out of the box.
This express cruiser has a 20-degree deadrise which should make her relatively comfortable at best cruise in normal conditions. At 14,200 lbs. (6,441 kgs.) you have a lot of beef under you. The depth of the cockpit is 28” in the stern, which is a nice compromise between making it easy to boat fish, but not so low as to make easy to fall overboard. The boat’s beam is 11’8” (3.6 m).

Hopefully by this time you have gotten a better picture of the totality of the Boston Whaler 345 Conquest. This boat is not for the casual weekend fisherman who only wants to go out on the bay or the sound, or just a few miles offshore. For those purposes, we say the 345 is over-kill, unless you just like the idea of owning a boat that could do most anything you wanted. Rather, this boat was designed for the boater who wants a relatively small boat for reasons of easy maintenance and low operating expense, but also wants to be able to take it most anywhere, most any time, just as one might with a far larger boat. For example, if you want to 150 miles offshore to the canyons, or cruise down the Dalmatian coast, or go from Chicago across Lake Michigan to Mackinaw Island, the 345 conquest can do it. As the name implies, the 345 Conquest was intended for adventure. 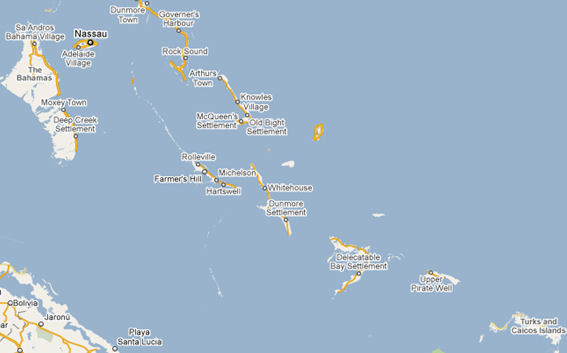 Because of its 421 gallon fuel tank the 345 can make it from Nassau to Turks and Caicos on one tank of fuel when powered by triple 250 Mercs at best cruise. Sounds like a great trip to us. Nassau is less than 200 miles from Miami. 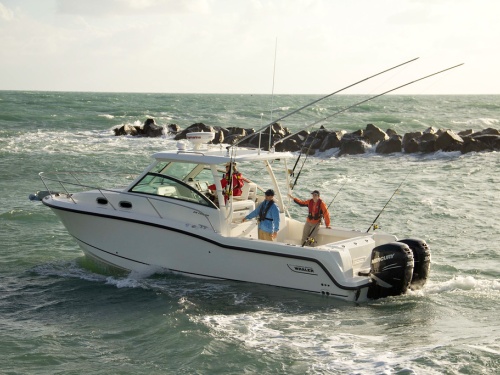 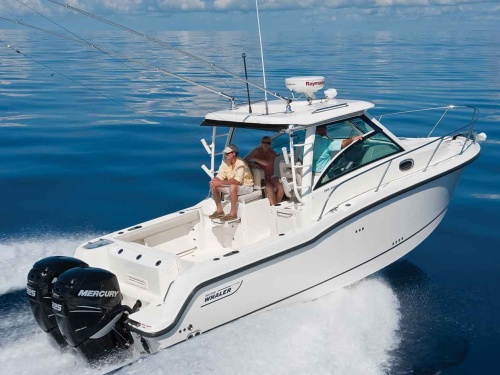 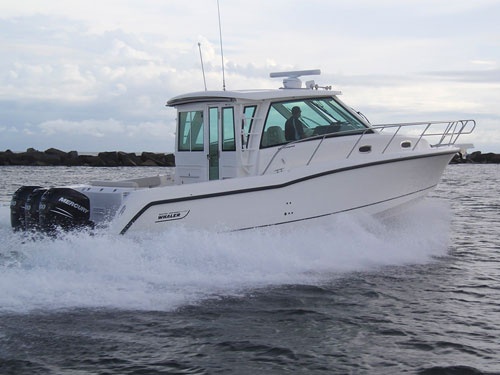 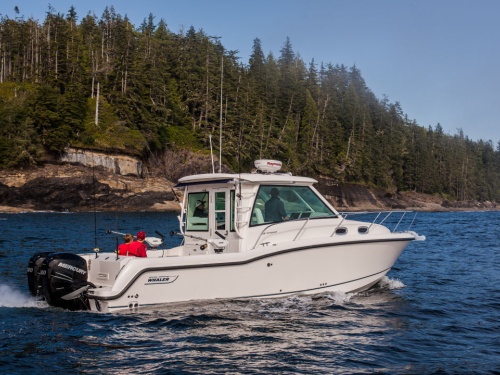