Boston Whaler’s 420 Outrage 50th Anniversary toured last fall’s boat-show circuit as part of the company’s celebration of 50 years of the Outrage series. Special graphics and upholstery colors give her a head-turning appearance and triple 600-hp Mercury V12 Verado outboards take technology to the next level. 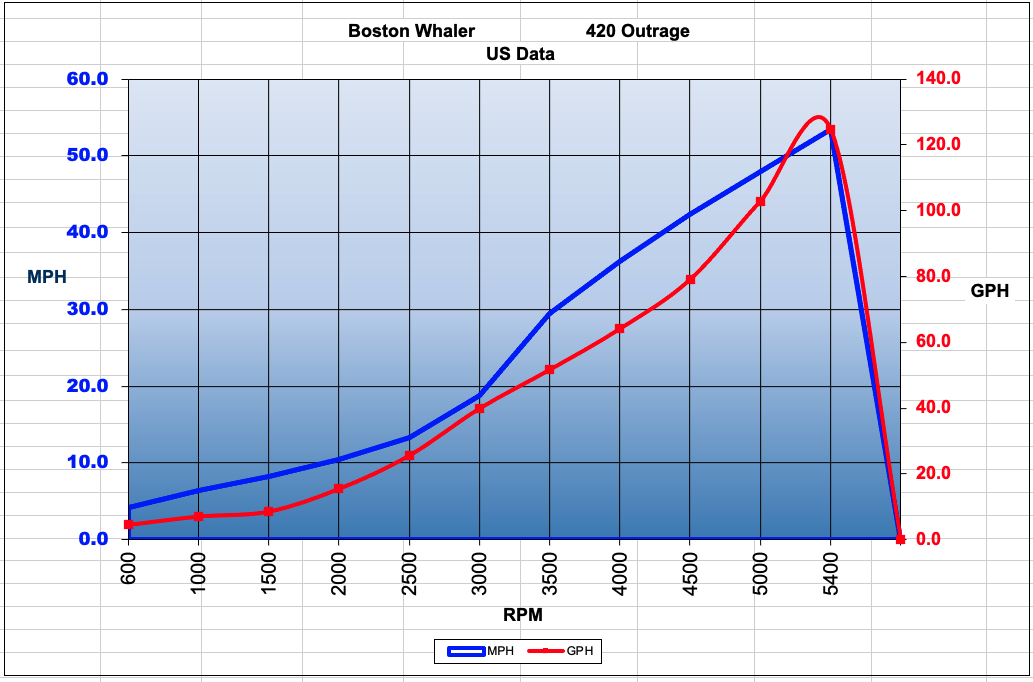 The mission of the Boston Whaler 420 Outrage 50th Anniversary Edition is to be the centerpiece of a celebration of the Outrage line. She’s the flagship of the vaunted Whaler fleet and is a proven bluewater boat upgraded with 1,800 hp of Mercury V12 technology, upgraded upholstery and finishes and graphics that are sure to grab extra attention at the docks. The optional second station and tower are worth considering for serious anglers.

The Cockpit. Boarding the 420 Outrage 50th Anniversary Edition is most easily done via the port hullside door that can also be used for landing large fish or reboarding after a dip or dive. There’s also a swim platform just ahead of the triple Mercury V12 Verado outboards with enough space to pass in front of them. The cockpit has 28” (71.12 cm) of depth and that depth increases to 35” (88.9 cm) alongside the console. The 40-gallon livewell that is an upgrade on the 50th Anniversary Edition is in the aft port corner. Fish boxes in the deck on each side have cooling plates so they don’t need to carry ice. A bench seat folds in from the transom. Outboard on each side are teak racks in the gunwales for rods, longer accessories like boat hooks or gaffs and downrigger balls.

When the fish aren’t biting or it’s time to host friends, fold in the transom bench and install the two teak tables on posts in the cockpit deck. Forward, the cockpit bar has a cutting board for bait or limes, an electric grill with a hinged solid-surface cover, a freshwater sink and 2.3-cu.ft. (.07 cu. m) refrigerator to starboard. Indicative of the boat’s dual-purpose nature, there are three slots for tackle storage on each side. In one of the more clever designs we’ve seen, a 59” (149.86 cm) wide bench seat that stows in the gap between the bar and the base for the helm seats pivots up and the backrest folds up so easily we could do it with one hand. For convenience, the tables stow on the bottom side of the hatch for the 420 Outrage’s mechanical room in the cockpit. With the wide hatch open, there’s access to the batteries, pumps, strainers and generator.

The Helm. Moving forward, the captain and two companions travel in individual captain’s chairs, all of which have fold-up bolsters and slide fore and aft. The seatbacks are finished in teak as part of the anniversary package and the outboard seats rotate to aft-facing if guests want to chat with passengers behind. Below, a fold-down step creates a platform that’s 6” (15.24 cm) off the deck to accommodate shorter captains.

The glass dash has triple 16” (40.64 cm) Raymarine multifunction displays with a new graphical interface that makes running on board systems as easy as playing a video game. There’s also a 7” (17.78 cm) Mercury VesselView screen for the engines, the latest version of the company’s digital controls and a joystick. Overhead, the underside of the hardtop is finished in the same color as the hullsides and it has storage for the cockpit enclosure.

Our Test Boat had the optional second station that had a bench seat with three fold-up bolsters that permit driving from a standing or seated position. If a captain chooses the latter, there is a fold-down footrest. The upper helm has a 12” (30.48 cm) chartplotter, a VesselView screen, tilt steering wheel and digital controls.

The Bow. Passageways between the console and the gunwales are 23” (58.42 cm) wide. We headed forward and found large chaise-style lounges on the front of the console with flip-down armrests on the outside and two more in the center. Fully forward, there’s wraparound seating in the bow and there’s a table that can be raised and lowered with the push of a button. An optional sunpad can be added. In addition to the storage compartments in the bulwarks, there’s more space beneath the cushions on the console, under the side cushions in the bow and two more hatches in the deck. In the forepeak, the 420 Outrage 50th Anniversary Edition comes with a windlass, 44-lb. (19.96 kg) stainless-steel anchor and 400’ (121.92 m) of chain rode.

Before we head out on the water, let’s take a look at the 420 Outrage 50th Anniversary Edition’s cabin. Entry is via a sliding hatch to port of the helm station. Average headroom in the belowdecks area is 6’5” (1.96 m) and there’s a skylight plus side windows that let the sunshine in. The skylight has a shade and a blackout version when privacy is preferred. A modest galley has a sink, Isotherm refrigerator and microwave oven, which is fine because of the fully equipped bar in the cockpit. There’s also a 24” (60.96 cm) TV.

The head is to starboard and Boston Whaler provides as much space as possible by using a curved door. Inside, there’s a mirror, a solid-surface counter, an electric flush toilet and a shower integrated into the overhead.

In the bow, the dinette has a folding table plus the forward-most backrest is hinged and folds up to extend the sleeping area to 7’ (2.13 m) long. The port-side lounge extends another 6’ (1.83 m) aft to the stairs.

Due to her tower and higher center of gravity, there’s noticeable lean in turns, but that’s to be expected. We didn’t have heavy seas to test her offshore performance, but crossing wakes of heavy yachts passing us gave a good feeling that she has the characteristic Boston Whaler traits of no pounding or hull slap that we would expect.

The upgrade to the Mercury V12 Verados and the exterior and interior treatments made our test boat worthy of the Anniversary Edition badge. Fifty years is a major milestone for most companies never mind a single model line, but Boston Whaler is no typical company and the Outrage series is a big reason why. The best news is that fans of the legendary manufacturer and of the 420 Outrage can actually buy this model and enjoy all that technology themselves. 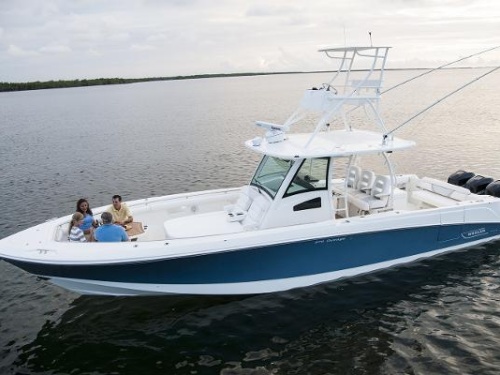 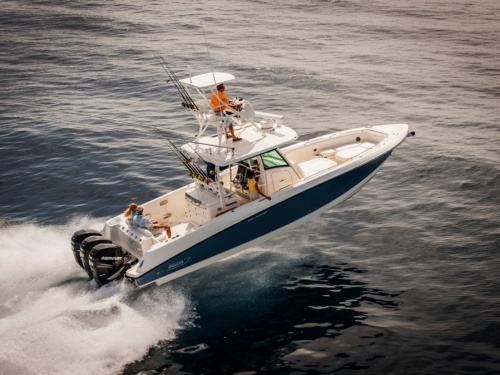 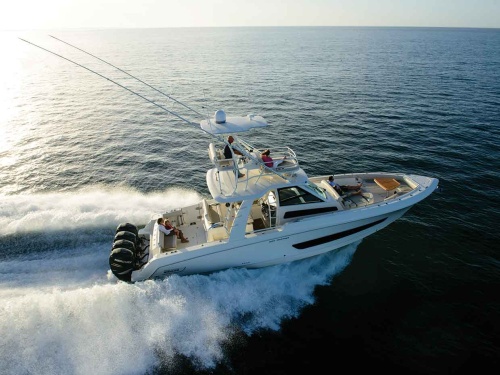 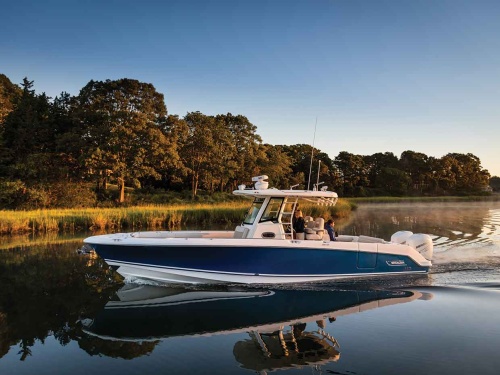