Formula has entered the center console market as it was a logical next step from the company’s highly successful crossover family of boats. It launched two models: the 387 CCF (Center Console Fish) version that we tested and the 387 CCS (Center Console Sport), which is more family oriented.  Power choices for each range from triple 300, 350 or 400-hp Mercury Verados, triple 450-hp Mercury Racing or dual 600-hp Mercury V12 Verados flanked by 54” (137.16 cm) swim platforms. 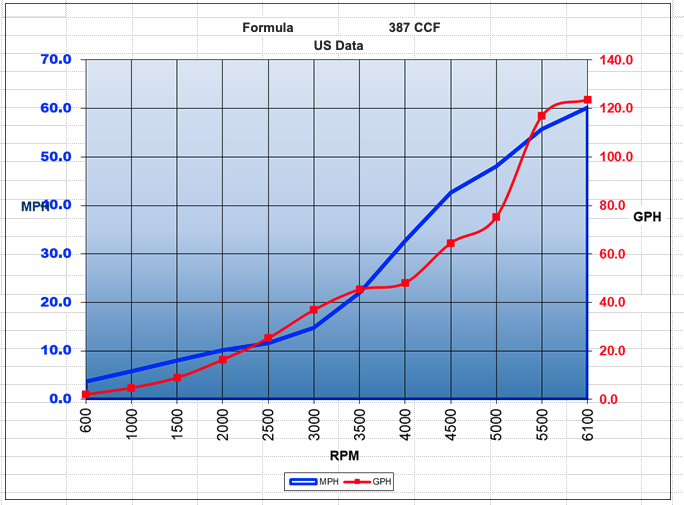 The 387 models were designed to bring flexibility and cross-platform boating to the premium market that Formula enjoys.  Both are offshore capable and include the walkaround versatility of the center console design.  With a cabin, these models also make excellent overnighters and weekending platforms.

Now to be fair, we should mention that Formula Boats tested this exact model in more ideal conditions of half load, flat calm fresh water and two people onboard. The company reported a top speed of 62.7 MPH and being only 2.5 MPH faster, we certainly find no reason to question that.

As for her handling, it’s easy to tell that this is a Formula.  At 20,000 lbs. (9,071.85 kg) she's heavy and that gives a good solid feel as she’s going through the waves.  Even with our 1’ (.3m) of windblown chop, there was no pounding or no slamming into the waves. She just sliced right through it. I found in these conditions that the best and most comfortable speed was at about 40 MPH.  While she'll do over 60, 40 had her pushing right through the waves with no adverse effects whatsoever.

She's quite responsive to the steering as well.  I needed only 1/2 turns to get it to respond how I wanted and that’s out of four turns from lock to lock.  There’s no need to be aggressive with the steering.  For acceleration, she’s not quick to come on plane but you don't want her to. Just bring the throttle up, let her get up on plane, get that bow down and she's good to go. I relied on automatic trim and that seemed to take care of everything nicely. I took the trim off and started handling it myself a little, but that allowed for getting just a little more top-end speed.  Cruise was unaffected.

As for the Seakeeper, not much to contend with here either. Turned off showed us rolling only 2-4 degrees. With it turned on, it immediately snapped down to 0-1 degree.  Maybe if conditions get worse, she’d be rolling a little bit more, but I don't suspect so. It’s an inherently stable boat. She remains docile in turns but if a (test) captain were to get heavy-handed she’ll roll about 20 degrees into the turn and dig her forward shoulder in causing her to bleed off speed. Just back off from the aggressive handling. Freeboard is 40” (101.60 cm) at the stern and 55” (139.7 cm) at the bow.  This, in addition to the FASTech hull design, provides a dry ride offshore.

Because this is a fishing battlewagon, we’ll start our inspection in the cockpit.  It measures 9’7” x 5’ (2.92 m x 1.52 m).  Safety is provided by 30” (76.2 cm) high bolsters that exceed ABYC (American Boat and Yacht Council) standards.  Padded bolsters surrounding the cockpit add to the comfort.

Forward, there’s a leaning post with plenty of storage, including dedicated tackle storage. With the touch of a button, we can bring out an electrically-actuated 170-can cooler with a padded top to the lid.  This also acts as a footrest for the aft-facing mezzanine seat just atop the leaning post.  The seat slides out of the way to reveal the sink, cutting surface and open counter space.

At the transom, there’s a pull-out bench seat with five rod holders across the top of the transom behind two 40-gallon (151.42 L) pressurized livewells with adjustable fills and drains as well as red and white interior lighting.  To port of the bench are two storage drawers with top drawer concealing switches for cockpit lighting and livewell pumps.  Just above is an electric grill.  To the sides of the cockpit are large in-deck fishboxes and each has macerators and freezer plates.  No half measures here.

To the starboard bulwarks, there’s under-gunwale rod storage with a toe rail just beneath.  Ahead there’s a raw water washdown with the hose on a retractable cord reel.  Behind there are automatic flush-out ports for the engines.  At the port quarter, there’s a transom gate to the swim platforms and there’s a panel ahead of the engine well for walking from one side to the other.  A hullside dive door is standard and to the port side.  The dive ladder stores right alongside.  Because the cockpit is as much a social zone as it is a working space, there’s an option to have an electrically actuated retractable shade overhead.

To the sides of the leaning post, there’s a full 22” (55.88 cm) of walking space.  Storage is in the deck to both sides that include a molded receiver for a 5-gallon (18.93 L) bucket.  More storage is in the bulwarks.  To the port side, there’s a compartment for lines with another compartment just ahead for the stanchions that support the bow shade.  To the starboard side, there’s fender storage that even includes dedicated holders for the optional fender clips.  To the starboard side of the leaning post, there are doors leading to paper towel storage, cockpit climate control, fish box freezer plate control and a trash receptacle.  To port is a 35-qt (33.12 L) pull-out cooler, line spool storage and a temp control for the port in-deck fish box freezer plates.

At the bow, there’s another social zone consisting of dual lounges ahead of the console.  Both include contoured seating, four Corian accented rod holders in the side armrests, a flip-down center armrest with connectivity and insulated storage below the seats. Safety is enhanced by the side bolsters topping out at 29” (73.66 cm) and rails topping out at 32” (81.28 cm).

In the center of the deck, there’s another fish box.  This can be swapped out with additional bow seating with removable cushions that will create a casting deck.  In the arrangement with the seating removed, it’s much easier to work the ground tackle at waist height.

Under a hatch at the foredeck is the concealed electric windlass that includes a chain counter.  It handles the 300’ (91.44 m) of rode and 30’ (9.14 m) of chain that leads to a polished stainless-steel anchor.  To the side, there’s a connection for a freshwater washdown and the windlass control switches.  At the bulkhead just below, there are two speakers and a subwoofer.

The 387 is a capable overnighter with a full cabin. Access is via a door to the port side of the console. The full-length console-side grab rail eases the entry. Inside there’s headroom at the entrance of 6’5” (1.96 m), increasing to 7’ (2.13 m) as there’s a step down into the main seating area.

This features wraparound seating surrounding a removable pedestal table.  A 32” (81.28 cm) TV is mounted to the forward bulkhead and two speakers are mounted alongside. Natural light comes from two opening side windows that include pulldown shades and a smoked-glass panel behind the flip-down bow armrest.

The table can lower to form a berth 6’5” (1.96 m) deep.  Behind the port side seatbacks, there is the vessel’s electrical panel and house batteries.  Behind the starboard seatbacks are storage and a standard hot water heater.  A drawer under the TV houses the table, pedestals and filler cushions.

A modest galley includes a microwave, a sink recessed into a Corian counter, plenty of storage and a refrigerator.  A Rockford Fosgate stereo provides entertainment in addition to the TV.

Even with a center console design scheme, we still see the “Formula Difference” in the fit and finish.  All bulkheads are upholstered.  There are wraparound padded bolsters for headrests.  Cabinetry is hardwood with dovetail joinery.  The aft bulkhead is upholstered in Chiliwhich material.

Saving the best for last, we come to the helm.  And what a helm it is.  It’s triple wide so think in threes.  As is three seats, three displays…

The molded composite dash is available in Charcoal or Mocha with Liquid Black panels.  A Ritchie compass is atop and in line with the center-mounted wheel.  A Garmin or Raymarine 16” (40.64 cm) color chartplotter is standard and a triple-screen installation is optional.  Even with the single, it includes a depth sounder with a 1,000W CHIRP B175M transducer.  There’s a remote keypad and Formula mounted it right next to the wheel, in reach of the main screens anyway.  We’d like to see that mounted on one of the seat armrests.

For controllability, there are the latest-gen Mercury Digital Throttle & Shift (DTS) controls linked to a 7" (17.78 cm) SmartCraft VesselView monitor.  Also standard is the Mercury Joystick Piloting for Outboards (JPO) with Active Trim.  Switching throughout the boat is digital and linked to the display screens. 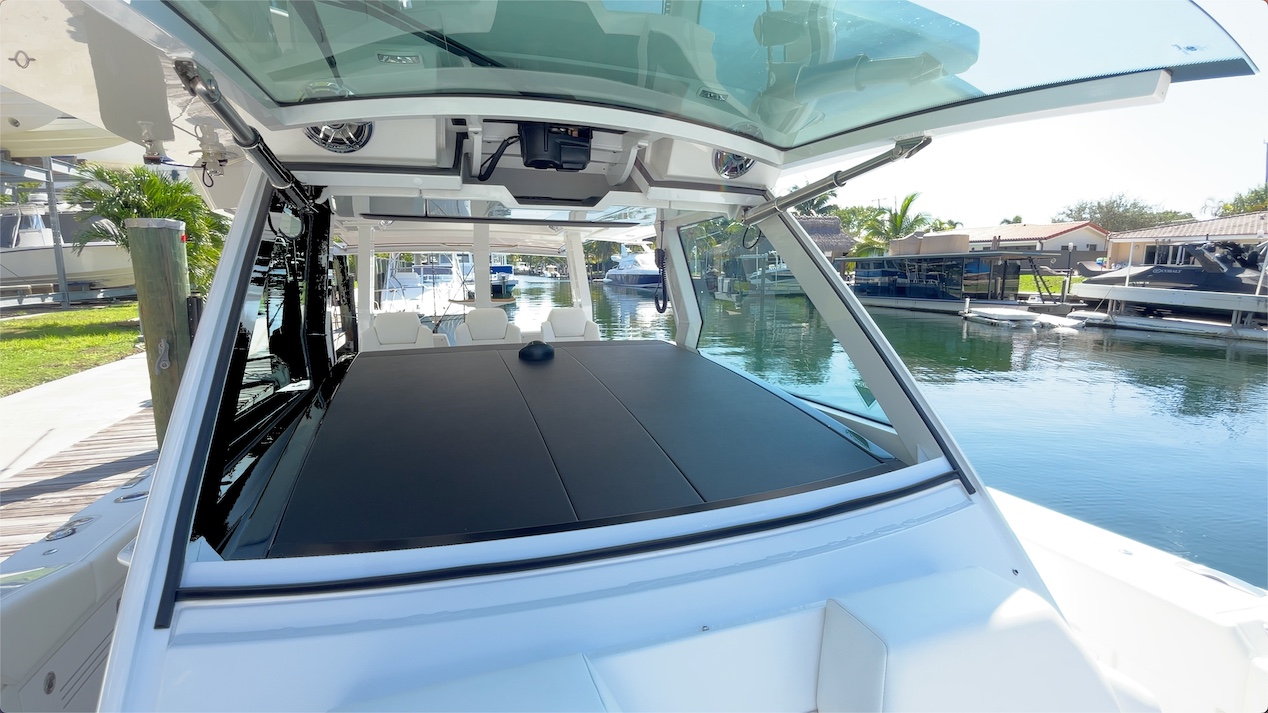 Keep in mind that all of this is standard. Most are offered as options on virtually every other model in class.  Aside from the additional displays, owners can also choose a 48” (121.92 cm) open array radar, a dual-band CHIRP transducer, a FLIR thermal camera, Sirius weather and Fish Mapping.  For the triple helm seats, all include flip bolsters and armrests.  The center seat is electrically adjustable fore and aft.  Optional electric adjustability is offered for the port and starboard seats.

The premium-level hardtop is also standard.  It’s a three-piece with compound curves and includes an access hatch with a center ladder above the leaning post.  Multi-color LED lights are fitted and there are air horns as well.   Rocket launcher-style rod holders are mounted to the trailing edge.  Gemlux outriggers with 18’ (5.49 m) poles are on both sides.  Twenty-two-foot (6.71 m) poles are optional.

This new model from Formula designer John Adams brings a top-tier center console choice to the world and expands the offerings for established Formula’s dedicated customer base.  With two models to choose from, we think the hardest decision will be... which one. 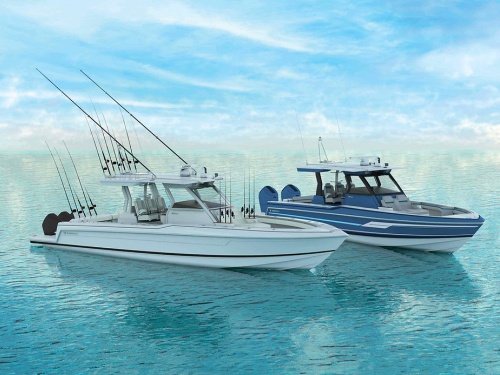