There are still “T’s” to cross and “i’s” to dot, but it appears that we’ll be testing the Fountain 38 CC soon to verify its performance and handling. It’s no secret that this boat will be fast, after all… it’s a Fountain and the very name is synonymous with speed. But we do have some reader questions to answer on a full test, not the least of which is “what’s her top speed really?” And, what is her top speed if Reggie is NOT at the helm – can mere mortals squeeze the kind of speeds out of these boats that Reggie can? For some of the other questions that we’ll be answering, check out our report on the 38 CC.

The Fountain 38 CC is obviously going to be a fast boat. After all this is the boat that set a world record on the Hatteras to NY run some years ago. A mere 410 miles in 6hrs 10 min 08 seconds. That’s an average of 65 miles an hour while burning .9 mpg. Not setting any records for economy, but in all other aspects, it’s a notable trip to be sure -- and in a stock boat.

But first and foremost, this is a fishing machine. A “get-you-to-the-fishing-grounds-first” fishing machine, but fishing nonetheless. Her features start out with no less than seven in deck fishboxes, all macerated with overboard drains, having a total capacity of 1400 qts.(1325 L).
The transom holds a 50 gallon (189.3 L) livewell. Six rod holders are mounted in the gunwales, storage for four rods is under the gunwales, and six more store under the deck. Nine more rods can reside in the T-top rocket launchers. And there’s additional storage under the forward V-berths as well as the back of the leaning post.
But the question we want answered is: Is all of this fishy stuff just lipstick on a race boat, or is it really a fishing machine?

The Helm Is White

The helm is laid out for performance and is a testimony to white, so wear your sunglasses. Personally, we’d like to see a slightly less glare inducing color, but otherwise, it’s a very orderly office. One item of note is the aft facing bolster. Obviously a very handy feature at high speed, when bracing yourself is a concern. When we test this boat, we’re going to find out how secure that exposed center console helm is in high speed turns. 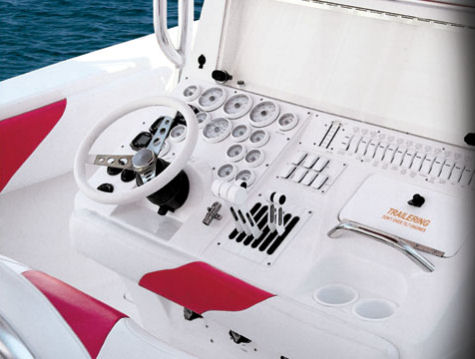 While glare inducing, the helm is very orderly. Check out the bolster below the controls.

Recommended power is triple Mercury 300 Verado’s. 900 horsepower? Does it really need that much? And another question, why not put triple 350-hp Mercs on this baby?

Below the waterline is where the real heart and soul of a Fountain lies. Fountain calls it a “Super Ventilated Positive Lift running surface”. Multiple lifting strakes combined with dual, full-beam hull steps to inject aerated water under the hull to break the bond between the water surface and the hull. Combined with the notched transom, Fountain claims its hulls achieve “10-20% faster” ride with better handling than the competition. Another item to add to the “we’ll see” list. (We’ll have some competitive boat test numbers with us as a benchmark. When we test.)

The Fountain hull is one of the most highly developed we have seen in class.

We’re also curious to see if the dual steps have a downside, which we’ve seen before in stepped hulls. With their inherent ability to inject aerated water under the hull, some stepped-hulled boats also become squirrelly in the turns, lacking the ability to cling to the water. This is another question we need to put to rest on test day.

With all of these lifting strakes and steps it will interesting to discover if the boat now pounds, instead of giving a soft entry in chop that BoatTEST.com captain’s noted years ago. In other words, has Reggie given up riding comfort in the name of “speed”? As with all hulls there will likely be a sweet spot where the soft meets the hard, but where exactly will that be?
There’s also the matter of fit and finish. How well designed and finished is the interior (an area where Fountains didn’t shine five years ago)? Does the eye-catching gel coat work stop at your line of vision, or is it carefully executed all over the boat? Are the opposite sides of the hatches and doors back-gelled or is that attention to detail lacking in obscure areas? These are just some of the questions we’re aiming to answer.
Chances are you have your own questions, and we welcome them in the comments section below. 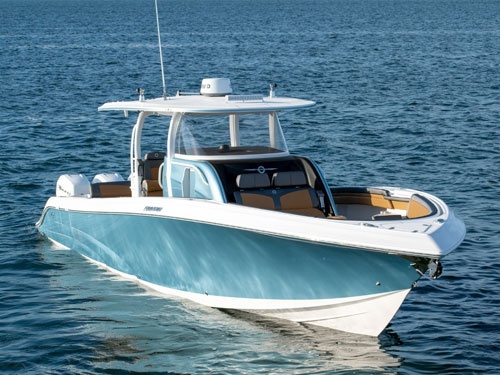 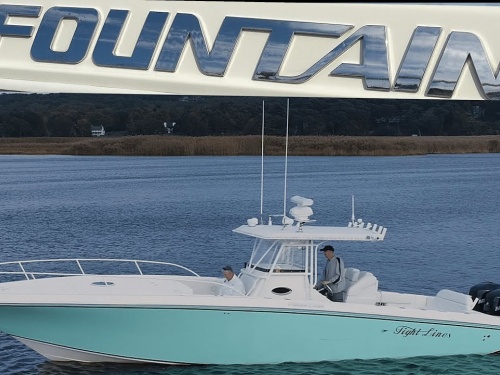 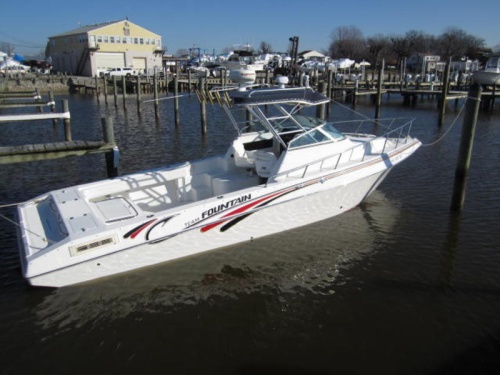