Grady-White has introduced the all new Freedom 235, which utilizes the Sea V2 Hunt & Associates hull shape used on all Grady-White boats. The Freedom 235 is set up not only for fishing, but for seating comfort, entertaining, skiing and family entertaining as well. She comes standard with a Yamaha F300 horsepower model, which we were provided on our test boat. With convertible seating arrangements, a large head compartment, and generous storage space, the Freedom 235, with her bowrider configuration, provides seating for ten, along with a multitude of functions and features which make her a versatile competitor in the popular dual console category. 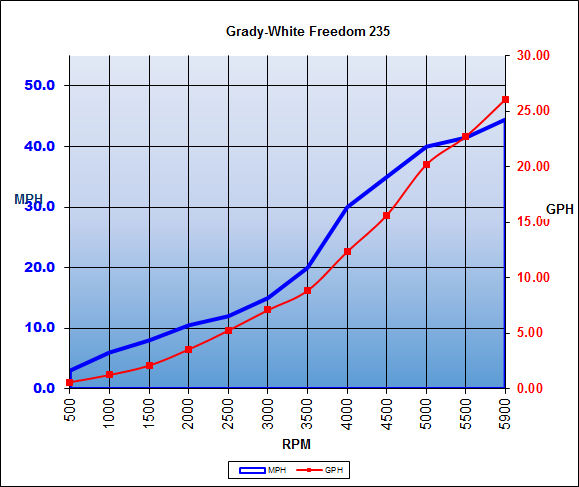 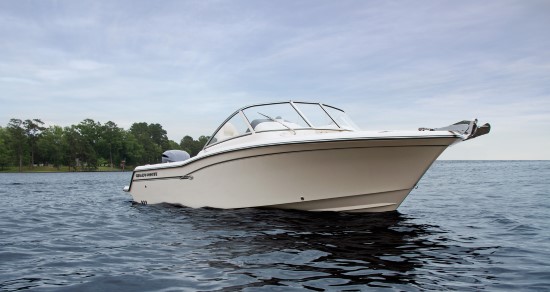 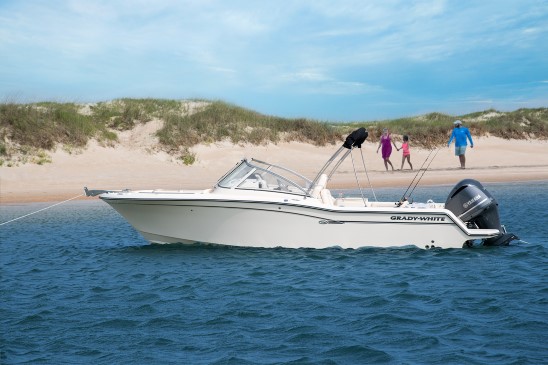 This all-new dual console answers the need for multifunction capabilities of swimming, water skiing, snorkeling and the pure pleasure of enjoying a boat while still holding true to its fishing roots. At 4,070 lbs. (1,837 kg) dry and approximately 5,350 lbs. (2,426 kg) equipped, her stability and solid build are immediately apparent upon stepping aboard, and even more so once underway. With her trademark “Rybovich” sheer line, even from a distance, she is unmistakably "Grady-White.’’ 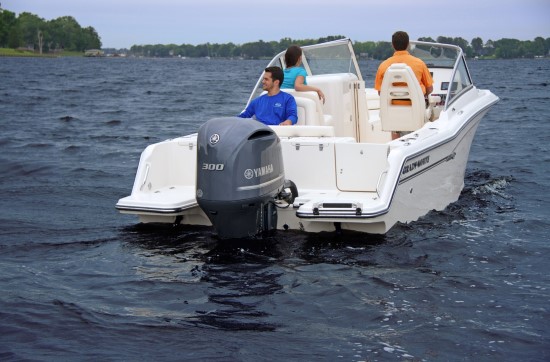 Stern perspective of the Grady-White Freedom 235 with the standard Yamaha F300 horsepower engine.

Any review of a Grady-White would be incomplete without a discussion of its construction. Each Grady-White hull has been exclusively designed by C. Raymond Hunt and Associates since 1989. Known for their solid build and durability, this brand new model incorporates full foam flotation, a Continuous Variable V hull, and true self-bailing.
In addition, her composite multi-layer dense foam stringer system provides extra stiffness and her all-composite hull contains no wood. Her Carolina flare and wide chine flats ensure a dry ride. Her sharp pointed entry and varying deadrise cushions the ride. Her deadrise is 20-degrees at the transom which is a good compromise of comfort and stability. 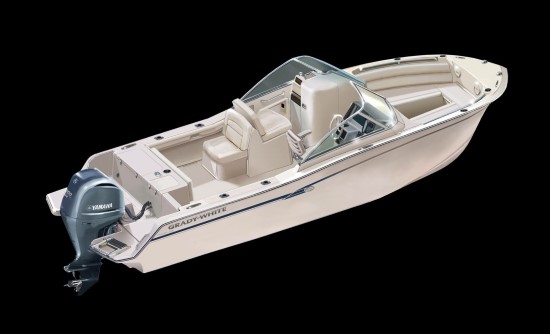 The Freedom 235 is all about seating, and has a bowrider configuration, with port and starboard reclined seating. The port and starboard lounge seats are connected forward by an additional cushion, creating a U-shaped bench seat, which, when the padded insert is put into place, creates a sun pad. In addition, a table can be mounted in place creating a space for enjoying lunch and snacks at the bow. Below the forward cushion is access to the anchor locker. There is 22.25 gallons (84 L) of storage beneath each seat. 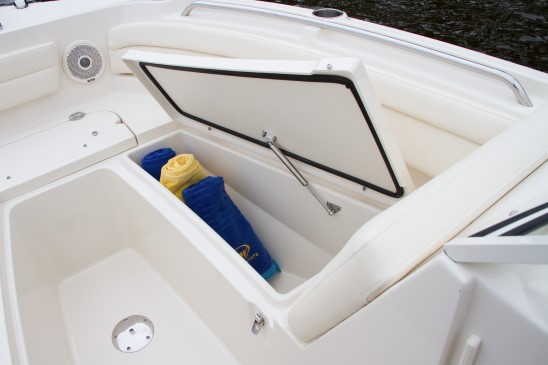 Storage locker to starboard is self-draining and can be used as a fishbox or a cooler.

The bow can be closed off from the cockpit and console area with a fiberglass door and window, sealing the console and aft cockpit from wind and rain at higher speeds.

Passing through the bi-fold door and windshield into the console area, there is a lockable head which is accessed by a corner door with a cut-out overhead, making for easier entry. The head includes the toilet, vertical wood storage compartments, a wood framed mirror with a medicine cabinet and towel holder, and dome and rope lighting.
The decking is teak and holly. As an added feature, there is a sola-tube above and to port which fills the space with natural light. An optional 10 gallon (38 L) holding tank is offered by Grady-White, to include a marine electric flush system, macerator and overboard discharge pump. 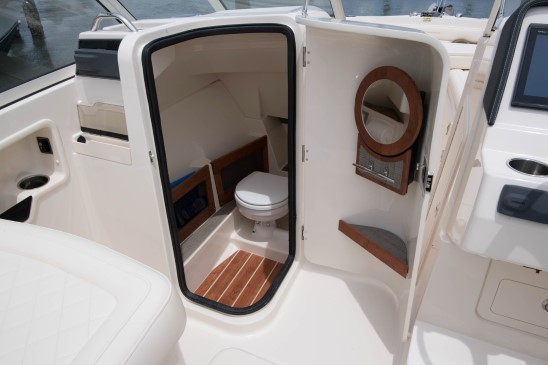 The head compartment of the Freedom 235.

Aft of the head console, is the extra-wide port companion seat, which consists of 5” thick foam padding and backrest, with storage beneath. From this seat, the Fusion stereo system is accessible to the left of the head door, with a storage pocket for a tablet beneath. Two USB charging ports as well as an iPod interface for the Fusion stereo are installed alongside. 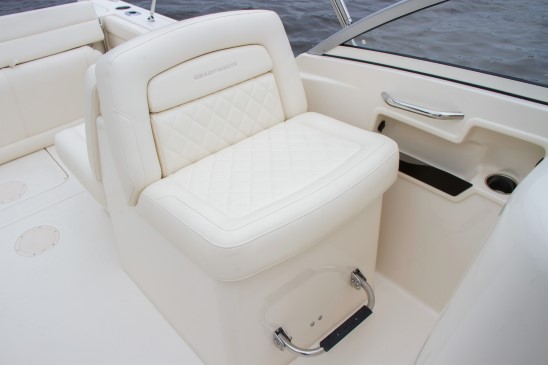 The port console companion seat is extra wide and solid.

Located behind the optional companion seat is an electromechanical adjustable seat facing aft that extends into a chaise lounge utilizing a remote switch to the left of the companion seat against the sidewall. 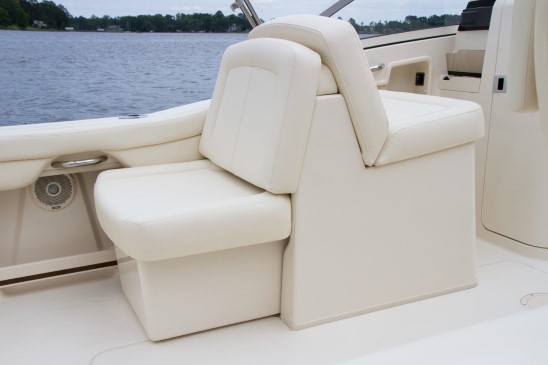 The aft facing seat in the upright position. It is ideal for spotting wakeboarders or watching a troll. 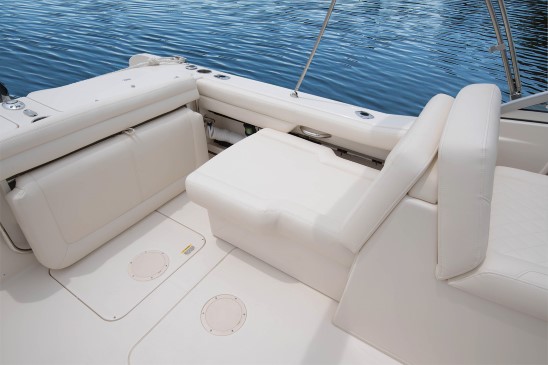 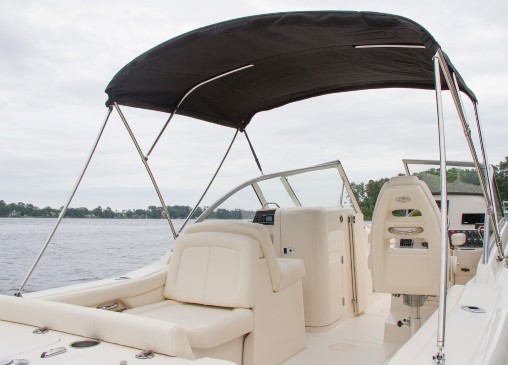 Against the transom is a fold-away bench seat with backrest, that, when fishing, can be conveniently retracted against the transom bulkhead. When deployed, it can comfortably seat three. To include the helm, this rounds out a seating capacity onboard the Freedom 235 for nine passengers and her operator. The USCG capacity rating is for 10 people.

The substantial fiberglass transom door is on the starboard side, and provides access to the extended swim platform which is easily accessed around the engine on both the port and starboard sides. The four step swim ladder to starboard will ease entry and exit to and from the water. The standard integrated, spring loaded ski pole is mounted into the transom. 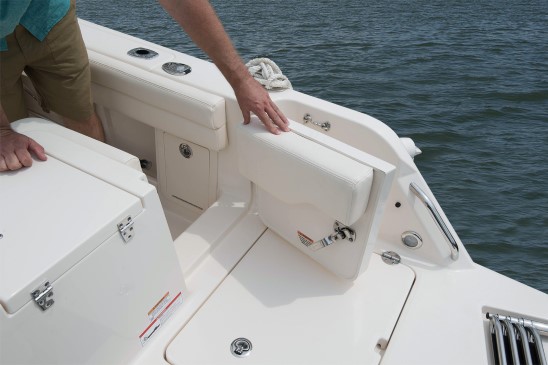 The transom door is substantial and has a positive latch. 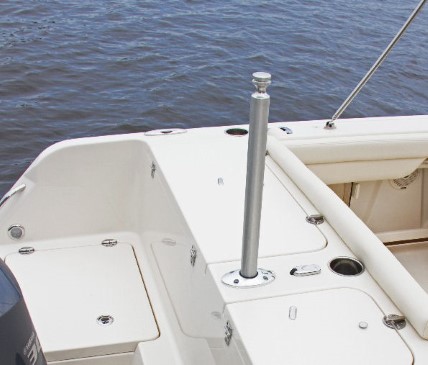 The tow pylon will make the boat popular with watersport enthusiasts.

There are two storage lockers in each side of the swim platform area, ideal for snorkel gear and an auxiliary stern anchor, which is useful when anchoring the boat astern to the beach to hold her into position. This of course should never be used as a primary anchor, and the boat should never be anchored solely from the stern offshore. 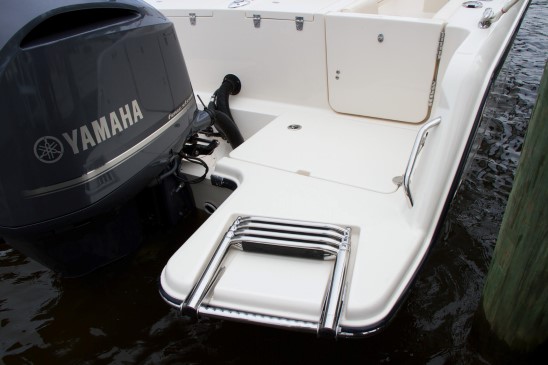 The telescoping four step swim ladder from the starboard platform. 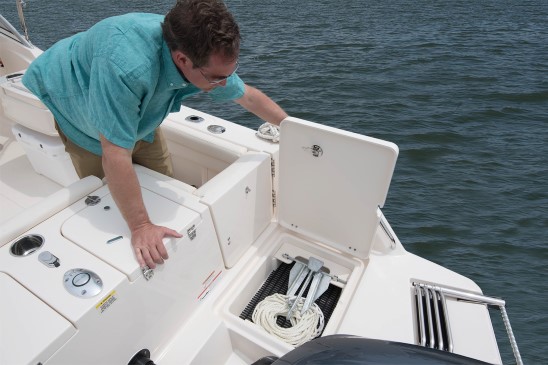 The starboard swim platform storage, housing a stern anchor, with matching storage to port. Never anchor from the stern offshore.

To starboard in the aft cockpit, is the optional feature of a wet bar, which includes a sink, with a retractable cutting board as its cover, and a Yeti cooler beneath. The Freedom 235 comes with a 20 gallon (76 L) fresh water tank and there is also a cockpit shower at the transom to starboard. 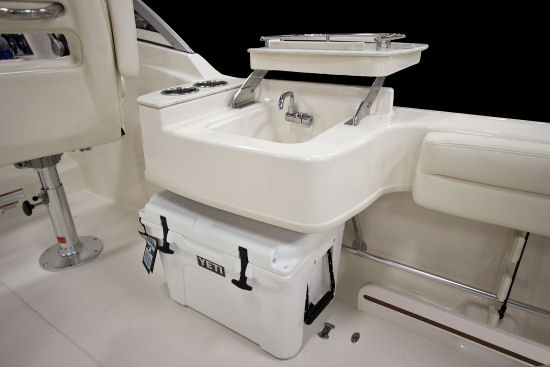 The optional wet bar with retractable cover and cutting board, sink and Yeti cooler beneath.

Sunset brings added enjoyment to the Freedom 235 experience with optional underwater lighting mounted beneath the swim platform. Blue courtesy lighting is also provided throughout the interior of the cockpit.

Fishing remains a mainstay of the function of this dual console. She has four gunwale rod holders, two on each side, for trolling and the aforementioned retractable transom seat allows floor space to move freely about the aft cockpit, which has 25” of depth. Toe rails to port and starboard, below the three in-wall rod storage racks (six total), provide footing for leverage. 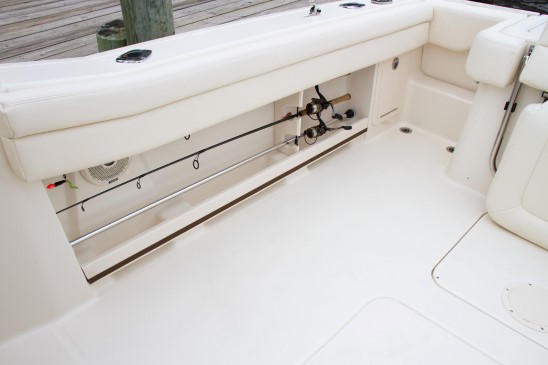 Shown are the rod holders. Note toe rail beneath.

In the transom, she has a 160 quart insulated fishbox, which can also serve as a cooler, along with an optional 62 quart, insulated raw water lighted livewell, with a full column distribution inlet and overboard drain. 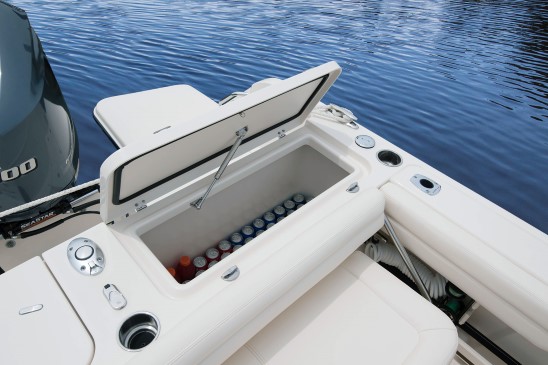 Transom fishbox that doubles as a cooler. 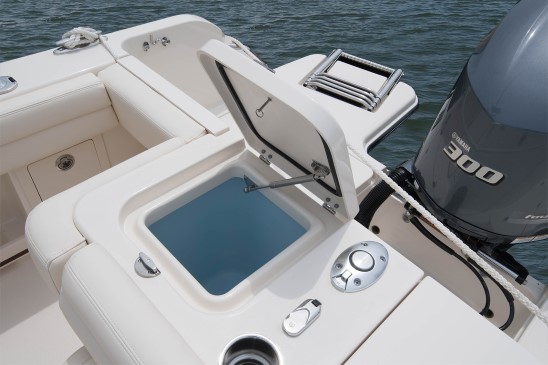 The livewell is offered as an option.

In addition there are two, port and starboard, downrigger ball/cup holders. The lockable starboard console compartment, which is lighted, houses a storage pocket and the tackle trays. The Freedom 235 is offered with an optional hardtop, and with this comes the additional option of either 15’ (4.57 m) mounted crank or radial outriggers, along with four rod holders.

The helm of the Freedom 235 has an adjustable captain’s chair, comfortably placing her operator within reach of the controls. 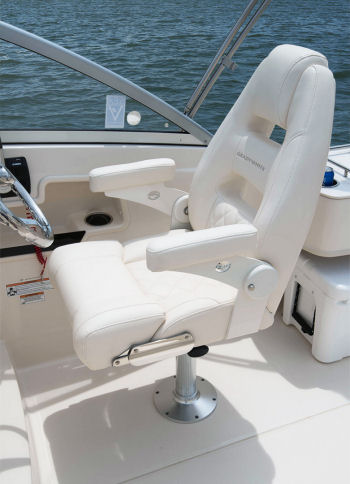 The adjustable captain’s chair with folding armrests and bolster. This is an unusually well-designed helm chair.

consists of the adjustable stainless steel wheel for the hydraulic tilt steering, a Yamaha EVC diagnostics display, Fusion remote display, hydraulic trim tab controls and all DC switches for the boat’s electric controls and lighting. There is room on the console for a flush mounted, dealer installed, 11” navigation display. Two cupholders create an extra convenient holding space for items such as keys and a cell phone. Her windshield is tempered glass with a windshield wiper to starboard for the operator. 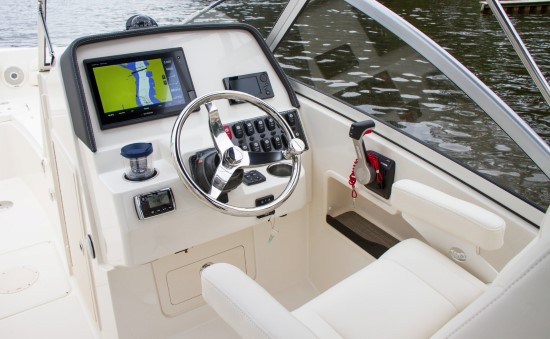 The helm and instrument console is simple and functional.

Our test of the Grady-White Freedom 235 was conducted in Morehead City, North Carolina outside of the inlet in the Atlantic Ocean. The seas and winds were calm and it was a warm and clear day in the high eighties. Our total boat weight with two onboard was approximately 5,700 lbs. (2,585 kg).

Dialing back to 4000 rpm, we achieved our best economy at 30 miles per hour, burning only 12.4 gallons per hour. This gave us a fuel economy of 2.4 miles per gallon, and, keeping 10% of fuel in reserve, this gave us a range of 251 statute miles.

The time to plane

for the Freedom 235 was 3.8 seconds and we reached 20 miles per hour in 5.1 seconds. Continuing to a cruising speed of 30 miles per hour took an additional 3.9 seconds, for a total of 9.0 seconds from the point of acceleration. Once on plane and trimmed up, the visibility while seated and with the bolster down, from the bow to the horizon, was unobstructed.

We put the Freedom 235 through a series of tight turns at full power, both coming out of a straight run and at take off, and she was both stable and responsive, with no slippage. All in all, the operation, stability and turning characteristics were first rate.

With this all new model, Grady-White has introduced a competitive and versatile multifunction dual console that possesses “big boat” features and good performance. Whether it be entertaining, cruising, skiing, or fishing, to name just a few potential functions, the Freedom 235 addresses each with the level of detail and quality Grady-White has come to be known for. 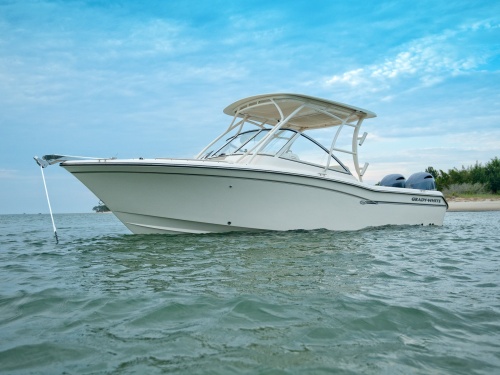 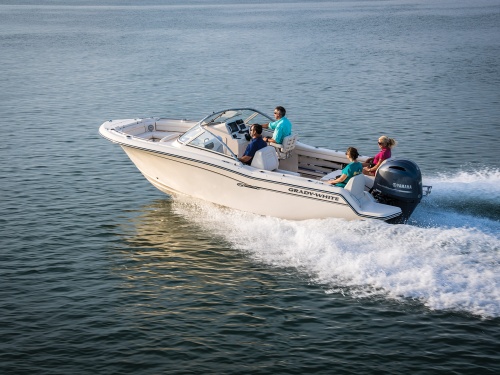