The competition in the 20-something range of boats is stiff and, for most manufacturers, only focused on providing an entry-level boat at a minimum price-point. Regal takes a different approach. It has taken its entry level boats, maintained the quality of the brand, and now added some “edginess” to them to attract a younger demographic. The result is the ESX line. We recently tested the 2000 ESX and found a fun boat with exciting looks that performed well thanks to Regal's proprietary FasTrac hull. 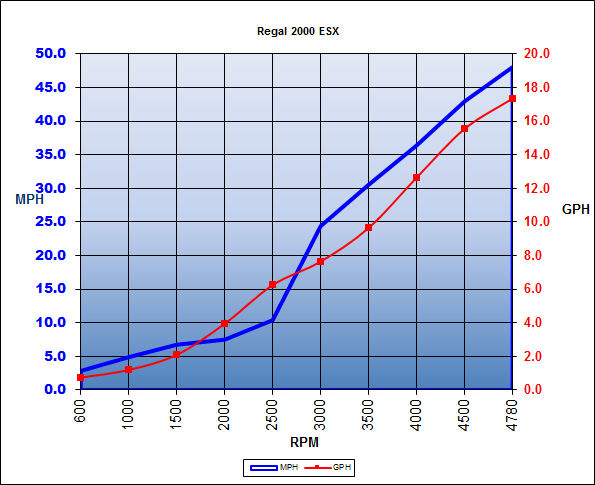 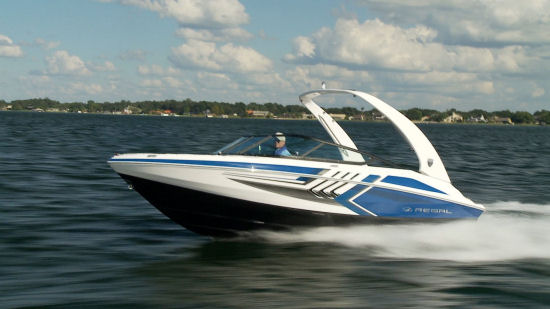 The mission of the Regal 2000 ESX is to add some extra “pizzazz” to a basic entry-level that’s already up-market. The ESX moniker means that she has some new interior colors and exciting exterior graphics, and all boats in the ESX line are powered by Volvo Penta sterndrives. 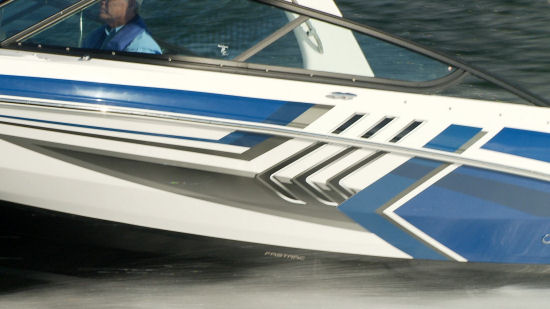 Exciting hullside graphics add the sharp features of the 2000 ESX.

Historically, Regal had shifted away from interior colors, preferring the gray tones for its base boats. With the ESX line, these new color choices highlight the bolsters and seats, plus the optional carpet ($455) will be a contrasting gray with piping that matches the upholstery. She’s offered in 3 different color schemes: Newport Blue, Electric Green, and Flame Red. 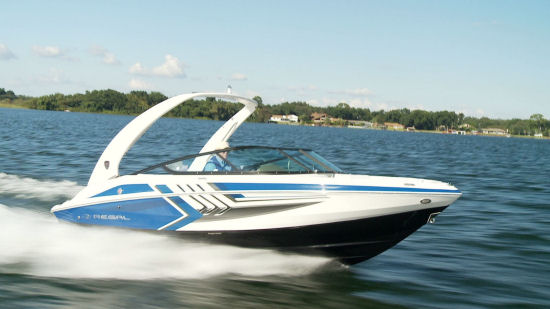 The Power Tower not only provides an elevated towpoint but a racy look to the profile.

This is Regal’s version of the stepped hull. By drawing air in from the sides of the hull, the friction between the hull surface and the water is broken, resulting in better speed and less fuel burn.

L-shaped seating across the port and stern, along with the swiveled helm seat creates opposing seating for intimate conversations. The observer’s seat flips from forward to aft facing and is adjustable for tall or short occupants.

Something that is usually missing in boats in this class is a storage locker for the anchor. In the 2000 ESX, Regal included one under the forward seat cushion at the bow.

The 2000 ESX is powered by the Volvo Penta V6-225 and no other options are available. We would have expected a V8 version to be offered but Regal made the decision to stick with the V6, with its smaller profile, which allows more room in the cockpit. By limiting the space required for the engine, Regal was able to create a full 78 cu. ft. of space in the cockpit.

Of course this may seem like the performance was limited as well, but to the contrary, we found the performance to be right on par with others in class, and that’s thanks in part to the qualities of Regal’s FasTrac hull, but more on that in a moment.

A major aspect of this new line appeal is to be found in its aggressive hull graphics.

, which produced a 17.4 gph fuel burn for a range of 100 miles. Best cruise is subjective. If we were to consider best cruise from an economy standpoint, then we would have to say that it was achieved at 3000 rpm and 24.4 mph. That generated a fuel burn of 7.7 gph and a range of 115 miles. However, bump the throttle up to 3500 rpm and the speed increases to 30.6 mph while only giving up 1 mile from the range. Fuel burn will now be 9.7 gph, a reasonable tradeoff to adding just over 6 mph. 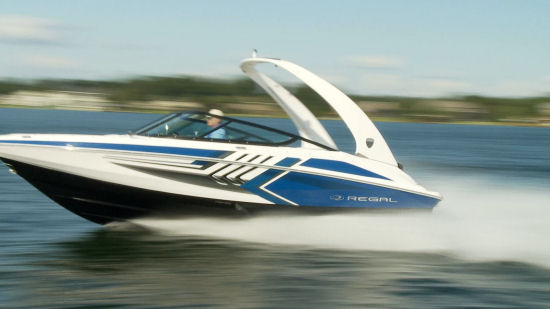 Top speed during our tests was 48.1 mph.

The engine in our test boat

was the Volvo Penta V6-225 tuning an SX drive. Lifting the aft bench seat accesses the engine as the seat and sun pad lift as a single unit. The installation is spacious, there’s plenty of room to work around the engine and certainly enough for the daily engine checks. 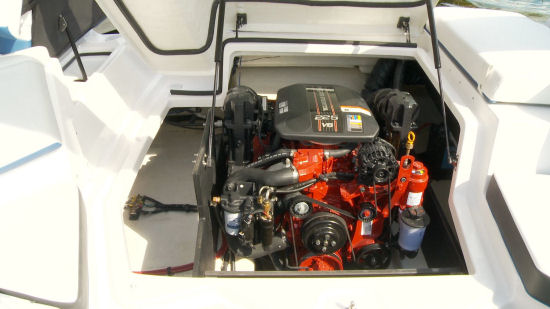 The only engine option is the Volvo Penta V6-225. The installation leaves plenty of room to the sides. We’d secure storage bins to the starboard side. 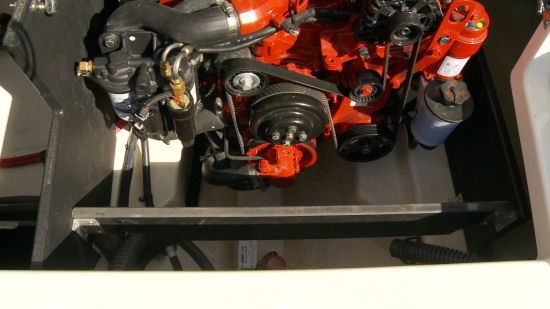 At the forward end of the compartment there’s a bulkhead leaving a few inches of open area before the aft seatback. We’d like to see this area enhanced by adding a base to the bulkhead, making a convenient place to put rags, oil, anti-freeze and perhaps some basic tools.

The handling characteristics are a direct result of Regal's proprietary FasTrac hull. With full beam steps drawing air in and under the hull the surface friction of the water is broken up and the result is more speed with less fuel burn. 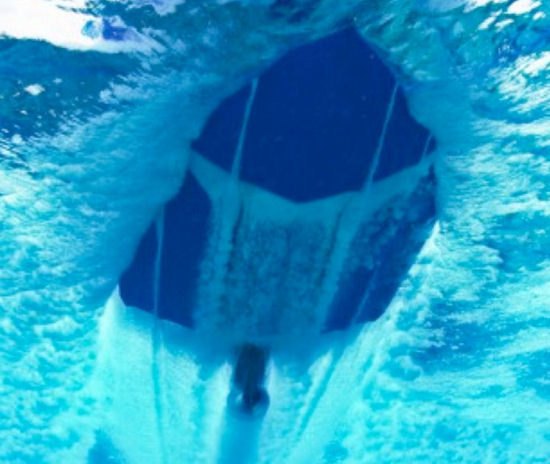 With air being drawn in under the hull there is less surface friction, less drag, and more speed with less fuel burn.

And our tests have shown that the technology certainly works. And to Regal’s credit, it doesn’t just “cookie cutter” the technology from one boat to the next. Each hull is specifically engineered for best performance and this can be seen as one looks from one model to the next. The curve of the steps are different, the geometry of the strakes is different, and some carry the strakes back past the step, others will move to a smooth hull past the steps.

the handling is light and quick. With a heavy hand she’ll show just a bit of chinewalk in hard over turns, but with a more relaxed approach to operations she turns quite sedately with no tendency to fall off the turn or slide out. She has a gentle bank into the turns and a relaxed acceleration. She’d make a great tow vehicle as there’s plenty of power onboard and wake is minimal at planing speed. For wakeboarding, slow down and get that stern to drop and the wake increases for catching air. 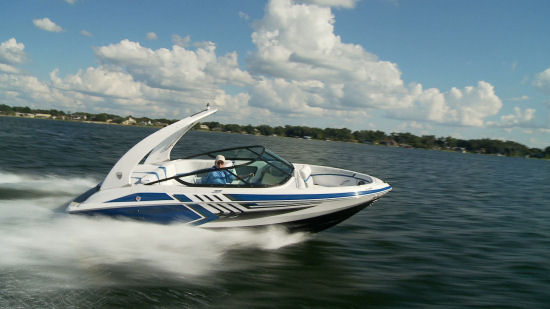 Turns were gentle with a slight 8-degree bank remaining comfortable throughout. 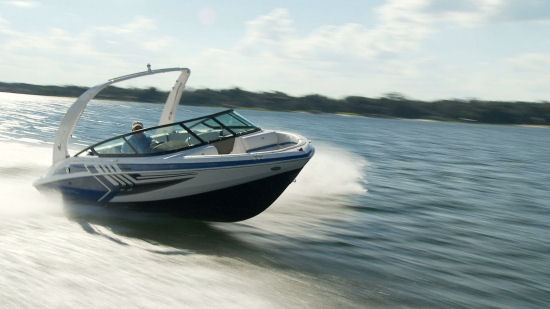 Slicing through wakes shows that the 2000 ESX keeps spray low and wide for a dry ride.

The bow inspection has to start with the anchor locker under the forward seat cushion. Both side seats were comfortable allowing an average sized person to stretch out with no problem. 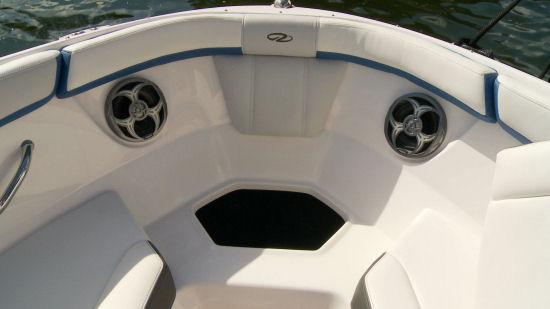 Regal even included anchor storage under the forward seat cushion.

Storage is under the seat cushions and here’s an area where Regal makes a difference. Nearly all boats in class will have lift out seat cushions to access storage, but Regal uses articulating hinges to keep the cushions secure while underway. Additionally, the console storage is accessed from the bow seatbacks and both this area, and the under seat storage, are interconnected making for one long storage compartment that can swallow up gear. 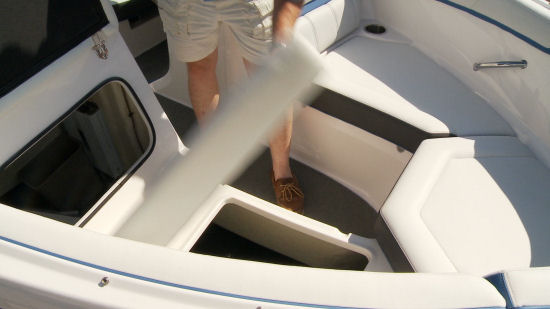 Bow storage runs under the seats and into the consoles where flip-up seatbacks are raised for access.

A bow filler cushion is offered as an option ($375) and will turn the entire area into a sun pad.

The helm is basic, as expected, but there’s still a look of class to it. It’s fabricated with soft tones. Three black-faced gauges are surrounded by stainless bezels and mounted front and center. 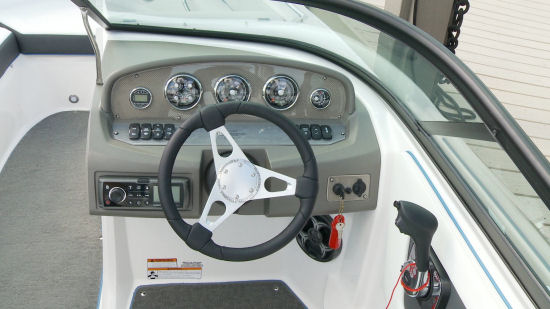 The helm is loaded with standard features that others include on the options list.

Several items are present as standard

equipment that typically are left to the options list on competing boats. To the left is a digital depth indicator. In our opinion, this is far and away the most important addition to any panel. The wheel is mounted to a tilt base. To the lower left is a premium marine-grade Fusion stereo with an MP3 port behind the hinged faceplate and it’s connected to 6 stereo speakers…all standard.

L-shaped seating highlights the features of the cockpit. The forward section of the seating area is the double-wide observer’s seat. It features a flip seatback allowing it to convert from a forward facing seat to an aft facing seat with no latches to lift, and no levers to release…just the way it should be. 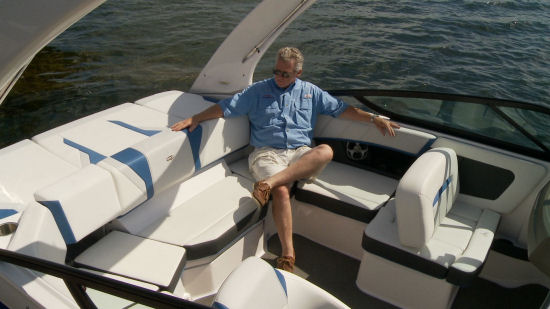 L-shaped seating wraps from the back of the helm seat to the forward observer’s seat.

The seatback also slides fore and aft, allowing it to accommodate both short and tall occupants, a first that we’ve seen of this adjustment being fitted on any boat, let alone on an entry level boat. 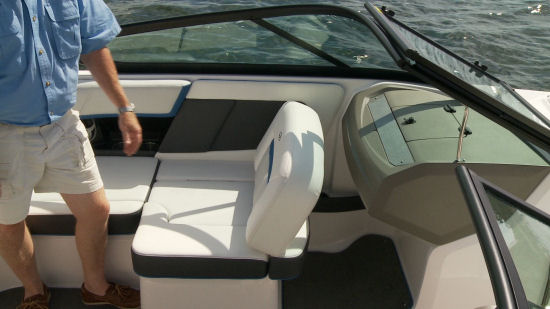 The observer’s seat has a flip seatback that accommodates forward or aft facing. It also slides to adjust for short or tall people.

A Bimini top is standard

on this model, but an interesting option that our test boat was fitted with, was the Power Tower ($5,275). This is offered in either black or white and provides an elevated tow point 6’8” (2 m) off the deck for wakeboarding, or tubing where the front of the tubes needs to be raised to keep from plowing. The tower also includes its own Bimini.
Of course that doesn’t address the “Power” part of the Power Tower. A switch at the helm activates an electric actuator that lowers the tower forward to the helm seat. In this manner the boat’s profile is lowered for getting under bridges or to facilitate storage in a marina rack or home garage. Underneath the tower are blue LED courtesy lights. 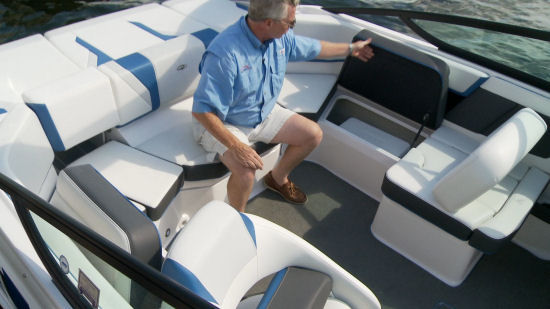 Storage compartments are under both side bench seats and the one to port contains a 25-quart (23.7 L) carry-on cooler.

A full beam sun pad was fitted to the aft section of the L-shaped seating, just atop the engine compartment. The port side of the pad lifts to form the raised seatback of a chaise lounge but it’s woefully low and is in need of supports allowing it to be raised not only to a higher elevation but for multiple positions as well. 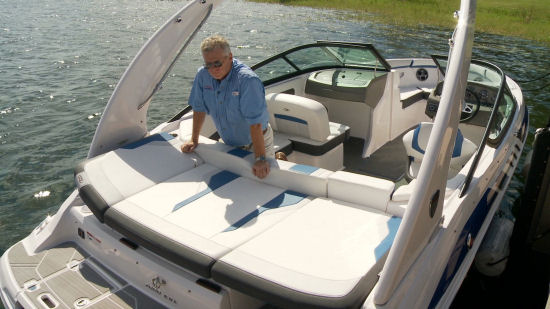 The sun pad has a chaise feature but we’d certainly like to see this seatback be raised further. 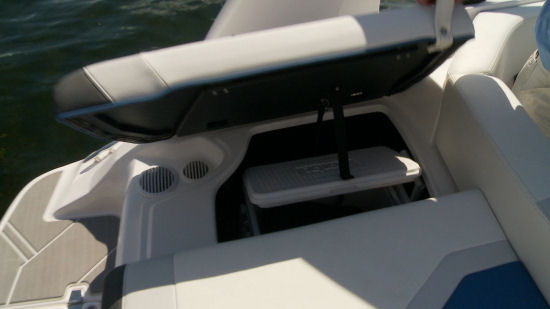 Lifting the cushion from the inside of the pad reveals a second 25-quart (23.7 L) cooler. This is a convenient feature as it eliminates the need to leave the stern to get a cold drink. 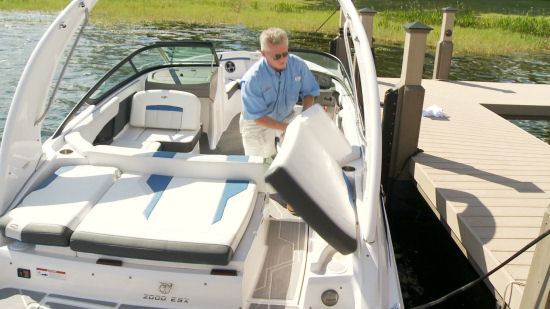 For walkthrough access to the swim platform, just lift the starboard side of the sun pad. Two seat cushions can be moved to reveal a non-skid step to the walkthrough.

Two steps to the walkthrough and onto the platform make for an easy transition. The decking on our test boat was treated with the optional SeaDeck synthetic non-skid ($380) and it was even enhanced with a Regal logo. A synthetic teak SeaDeck is also available.

Certainly any boat in this class focuses on the basics, even with an up-market entry-level model. Among the optional items we would definitely add to our purchase order are, depending on how she was going to be stored, either the bow and cockpit cover ($965) or the trailer/storage cover ($745) and the removable pedestal table ($665).

There are some other options to consider

, but these are certainly less essential. SeaDeck rubberized matting for the walkthrough and platform are important ($380). Regal makes them available in gray or simulated teak. Sea Grass matting ($730) would further add a touch of class. Docking lights would be a great bonus for night operations ($285).

We think the Regal 2000 ESX has killer looks. But looks are only part of the battle. Thanks to her FasTrac hull she’s got the performance to go with the looks. If the goal was to add some “edginess” to her in order to attract a younger demographic, then we think the mission was accomplished. 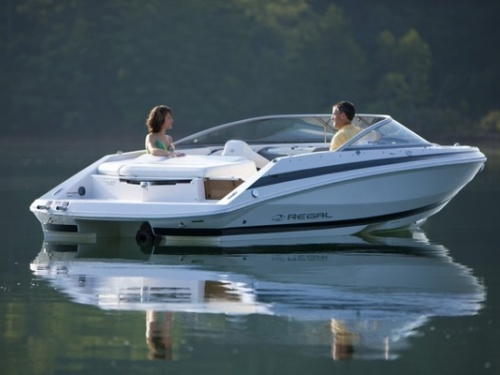 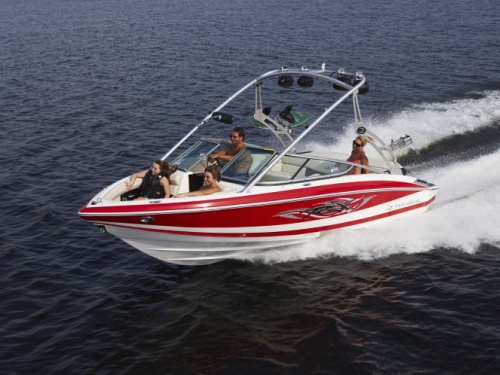 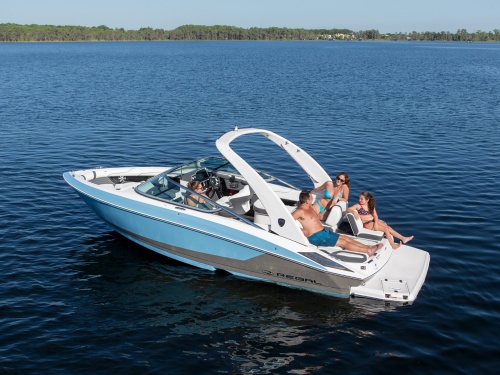 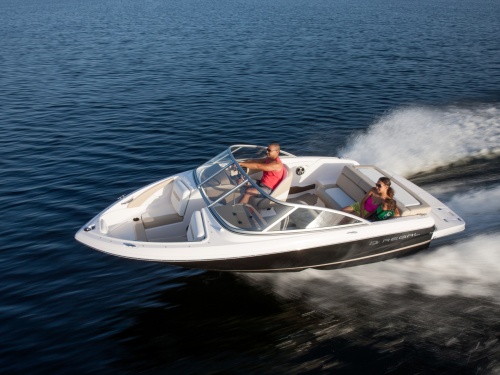