The Sailfish 272CC combines the best fishing and cruising attributes in a well-rounded center console. The boat is basically divided by purpose with cruising amenities in the bow, a cockpit set up for fishing and a private head compartment in the console. 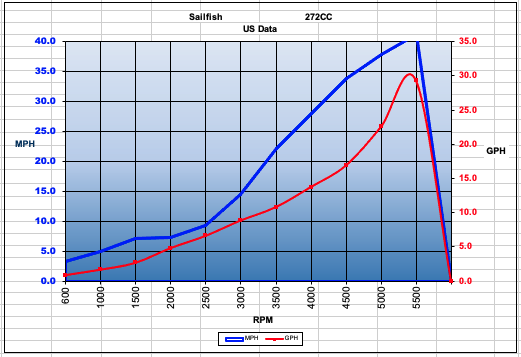 Sailfish designed the 272CC to mix fishing features and cruising amenities in a center console that’s big enough to head offshore on the right day and still be efficient to own and operate with twin 150-hp outboards.

Handling. The 272CC has Sailfish’s variable deadrise design that’s designed to work well in a variety of conditions. From the helm, she felt nimble in turns and around the docks, the twin outboards helped us put the boat exactly where we wanted her to go. A bow thruster is an available option.

The Stern. Twin swim platforms flank the outboards on each side with a four-step ladder beneath a hatch to starboard and a wet locker to port. There’s space to pass between the engines and the transom, but it’s an angled walking surface in the splashwell. The transom has four rod holders and a tool rack. To starboard is a gate that leads forward into the cockpit and just alongside is a pull-up shower.

The Cockpit. With the exception of some rod holders and forward fishboxes, the majority of the fishing features on the 272CC are aft in the cockpit. To port is an aerated livewell with an acrylic cover, rounded corners and a blue finish. We like that Sailfish provides an access panel in the base if any work needs to be done on the livewell pump. There are toe rails to port and starboard, and bolsters line each side of the cockpit so anglers can lean against them when fighting a fish. Rods and items like gaffs can store in gunwale racks. Of the 19 rod holders throughout the boat, six are in the standard hardtop in a rocket-launcher-style configuration. The top also has spreader lights. On the back of the leaning post is a bait-prep station with a sink, another livewell, two storage drawers and a cutting board that’s held in place by magnets. When the fishing is done, a seat folds inboard from the transom and our test boat had the optional extra folding seat to port.

The Helm. Moving forward, our test boat had the optional LP14 leaning post with twin high-backed bucket seats that slide fore and aft electrically and have folding bolsters and armrests. Down low, each seat has its own folding footrests on the front of the base. On top of the helm console are Sailfish’s signature sectional storage compartments beneath an acrylic top, and forward are the full-height tempered glass windshield and side windows. The dash has plenty of real estate for adding electronics. Our test boat had a centrally-positioned compass up top, a Yamaha Helm Master screen and accessory switches across the top. To port of the tilt wheel is the control for the Fusion stereo while to starboard are the digital binnacle-style Yamaha controls with trim tab buttons placed so the driver can reach them with his throttling hand. Inside the locking glovebox are a USB port and 12-volt plug. Overhead are the Garmin VHF radio, a switch panel for the lights and a locking storage compartment.

The Console. A hatch in the port side of the console opens a compartment that includes a head. Also inside the compartment are the ladder for the hullside door, a freshwater sink and the table that can be erected in the bow. Battery switches and circuit breakers are on the forward bulkhead, which also had access panels to the helm rigging.

The Bow. On the front of the console is a seat with a fixed backrest. The bottom cushion is hinged and raises on a gas strut to reveal an insulated cooler. On each side, the bow has forward-facing lounges with clever backrests that raise air lower instead of needing to be removed and replaced. There are insulated fishboxes under each seat, but they can also be used for dry storage, too. The forward-most bottom cushion in the bow has the socket for a table to be installed. In the foredeck is an anchor locker that has a Lewmar windlass and the stainless-steel anchor connects to the rode via a pass-through plate in the bow.

Options To Consider (Not discussed in the report)

The Sailfish 272CC continues the manufacturer’s record of building a quality center-console that will please a family that wants to fish one day and hang out at the sandbar the next. Standout features include the full hardtop and tempered glass windshield and side windows that are on the standard-equipment list. The retractable bow backrests and folding transom bench seat are also on that list and notice that all these are cruising-focused items. Sailfish had the fishing pedigree and by stepping up its cruising-comfort game, the company makes the 272CC even more appealing. 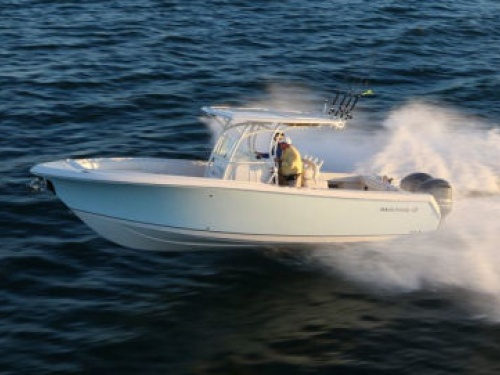 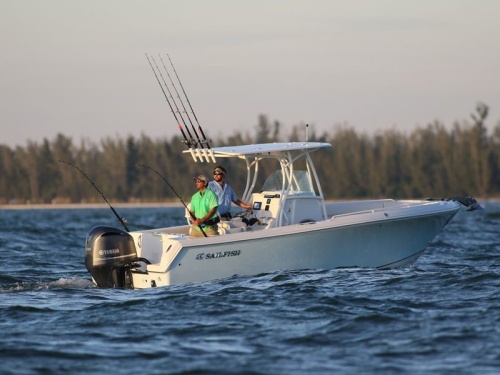