The Aquila 32 is a versatile cruising catamaran that is set up with a focus on dayboating with a swim platform, cockpit, and bow. A highlight is the clever transom and platform design that integrates the twin outboard motors into the stern. The small cabin to port should comfortably sleep two and there’s a private head to starboard. 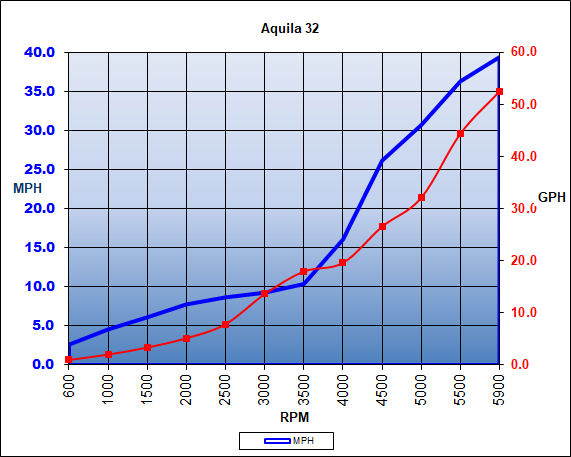 After the positive response the company received for its 36’ (10.97 m) catamaran, Aquila unveiled its 32’ (9.75 m) version at the Fort Lauderdale International Boat Show in November 2018. The boat is designed for day cruising with a large swim platform, cockpit, bow, including the wet bar that comes with a refrigerator, sink and can be equipped with an optional grill. The boat has a private cabin with a double berth to port and a separate head in the starboard sponson. 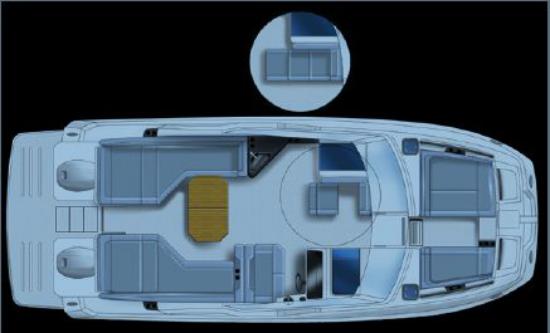 The lounges in the cockpit and bow offer many seating options and check out the swim platform and stern design.

The Stern. The easiest way to board the 32 will be by stepping on the swim platform that extends 3’ (.91 m) abaft the motors and spans 11’4” (3.45 m) across the stern. Our test boat had the optional hydraulic lift that raises and lowers the platform with the push of a button. When the platform is in the raised position, on the trailing edge is a four-step ladder with sturdy rails on each side. The four rungs are compliant with American Boat and Yacht Council standards for recreational boats. Additionally, there is a set of stairs between the outboard motors that lower with the platform to make it easy to reboard and they lie flush as part of the deck when the platform is raised.

While it appears that the 32 is designed with the twin outboard motors integrated into the stern, a more accurate way to describe it is that the swim platform extends abaft the motors. There’s a center passageway between the motors and then the platform is unobstructed behind them. 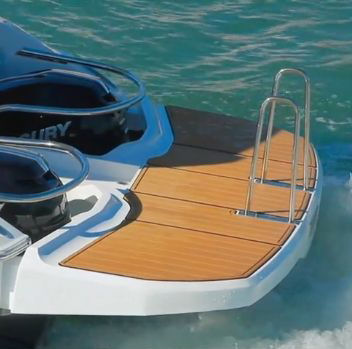 The swim platform extends a full 3’ abaft the motors to keep swimmers clear of the propellers.

Aquila designed the stern and platform so that the motors can still be raised out of the water, and because the platform is 3’ (.91 m) aft of the propellers, it’s highly unlikely that a swimmer would come anywhere near them. The motors have stainless steel guards that encircle the powerheads and the cowlings have anti-scuff strips on them that lift hinged sections of the cockpit lounge when the motors are raised. Future models will have gas struts on the seat cushions to help lift them when the motors are tilted. 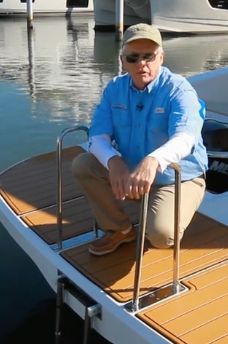 The centrally positioned boarding ladder has four steps and the sturdy rails should make it easy for even a SCUBA diver in full gear to climb up.

Three stairs make it easy to descend from the stern passageway to the swim platform when it’s lowered into the water. 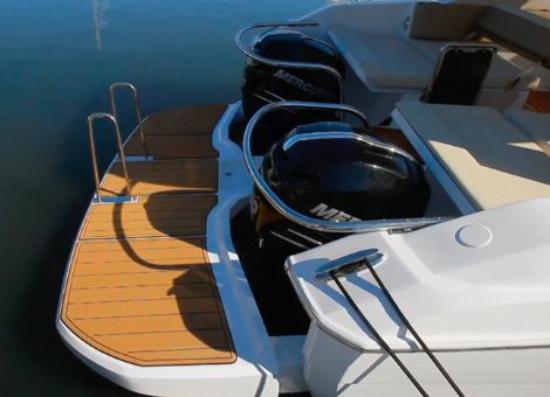 The design provides the unobstructed swim platform we expect from a sterndrive with all of the efficiency benefits that come with twin outboards.

This anti-scuff strip on the motor’s cowling keeps the cover from getting scratched when it pushes up the cushion over the splash well. 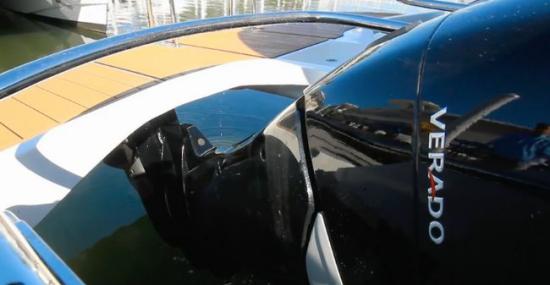 The swim platform is designed so that the motor can be tilted out of the water.

A gate closes the passageway from the stern to the 32’ (9.75 m) cockpit. The EVA foam decking feels good underfoot and the way the cockpit is laid out gives the boat a conversational and entertaining atmosphere. It’s clear that Aquila’s designers took full advantage of the boat’s 12’8” (3.86 m) beam to create a cockpit as large as possible given the dimensions of the vessel.

To enhance the versatile feel, the rear seat backrests can be moved to create aft-facing chaise-style lounges. Additionally, the hardtop has 6’8” (1.78 m) of headroom and when the time comes to pull a tube or adventurous boarder, the ski tow is installed on the trailing edge of the hardtop. Our test boat had speakers and manual skylights in the hardtop.

Optional electrically actuated skylights are available. Because of the depth provided by the sponsons, there are nine extra-large lockers under the seats throughout the Aquila 32. 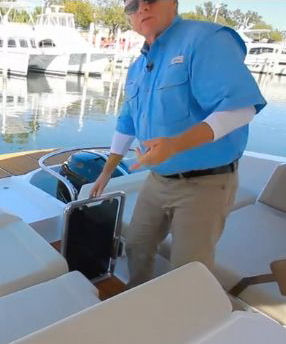 The stern gate opens and closes easily and secures firmly in either position.

This photo gives an idea of just how large the cockpit is. Our test captain looks small in the surroundings. 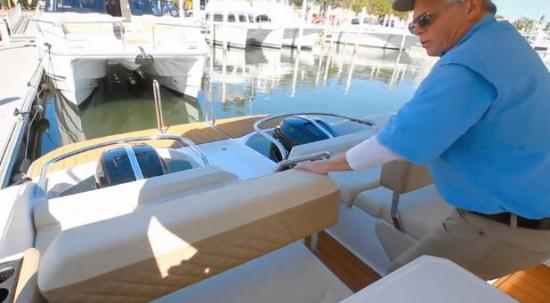 The backrests for the cockpit lounges can be positioned for forward or aft-facing travel. Notice the quality diamond-stitch pattern in the upholstery.

In this photo, the port cockpit seat is set up booth-style. 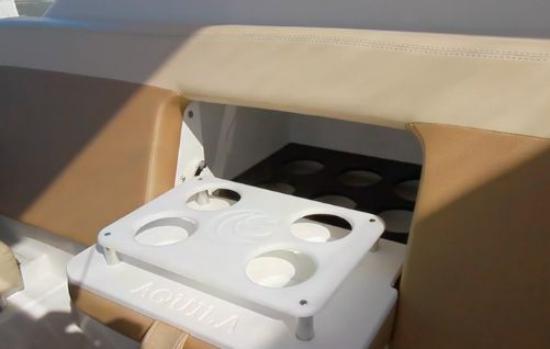 Cup holders fold out of the port backrest and inside the compartment is a rack for six bottles.

To starboard, the portable table can be set up quickly to create a spot for enjoying lunch or a post-cruise cocktail or it can be lowered and covered with a cushion to create a large lounge.

We like that the cockpit and helm deck are all on the same level. To port, the backrest for the booth-style lounge can be adjusted so two people can sit facing forward. Just ahead in the walkway to the bow is the outdoor galley, which has a refrigerator, a sink, a wastebasket and storage. The cover for the sink has a hole so that a person can stick in his fingers to remove it.

Aquila took the plug that was cut out to make the hole and glued it in place so there’s dedicated storage for the cover. With it secured, the cover now becomes a fixed cutting board. 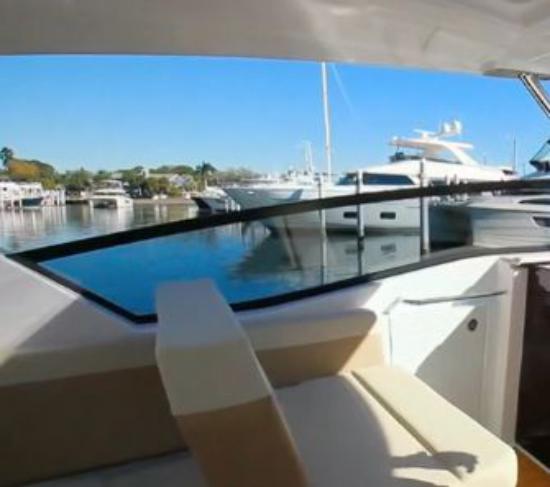 The backrest to port can also be positioned so two people can sit across from the helm facing forward. 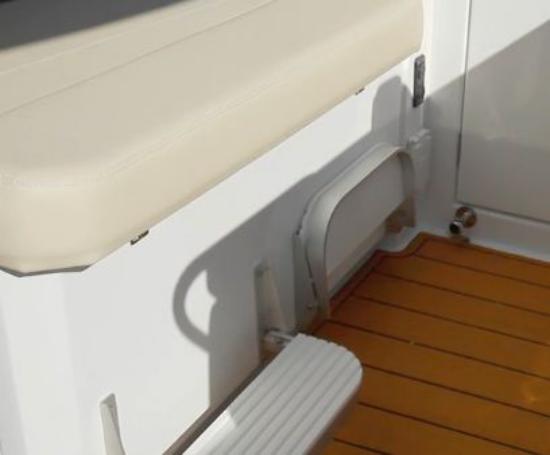 For added comfort, there are folding footrests for the passengers seating on the port amidships lounge. 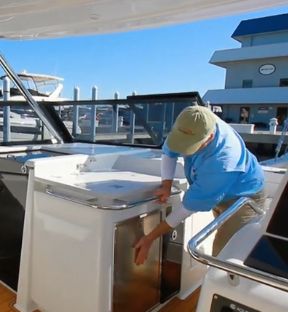 The cockpit galley is compact and has the refrigerator in the base with the pull-out wastebasket alongside. 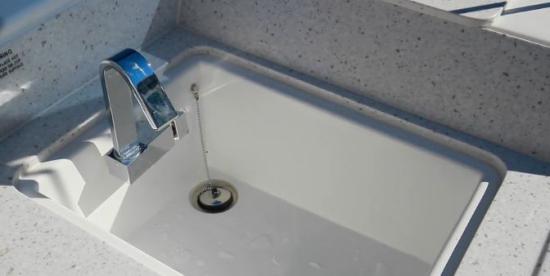 The faucet for the sink folds away when not needed and a cover slips into the recess in the countertop.

The removable sink cover secures in place on this knob, creating a secure raised cutting board.

A sliding cover unveils the grill that’s right next to the sink.

To starboard, the helm has a 12” (30.48 cm) Raymarine multifunction display and a 4” (10.16 cm) Mercury VesselView screen in the faux carbon-fiber dash panel. There’s space for Aquila to install twin 12” (30.48 cm) screens. Our test model also had Mercury’s ActiveTrim control.

Accessory switches are clearly labeled and illuminate when lit and the glovebox has storage plus connectivity plugs. The helm seat is a 48” (1.22 m)-wide doublewide model with separate fold-up bolsters and the angled footrest is finished in the same EVA foam as the cockpit decking. 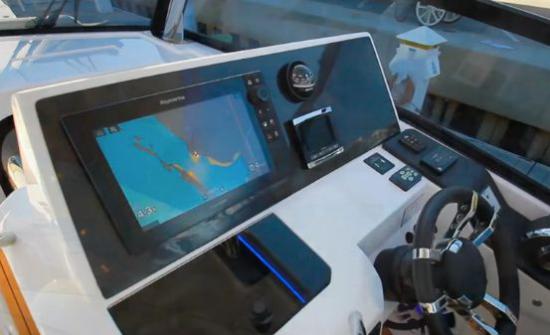 Our test model had the single Raymarine 12” (30.48 cm) screen plus the compass and 4” (10.16 cm) VesselView screen. There’s space for a second multi-function display should an owner want one.

Mercury’s digital controls are to starboard in comfortable reach. 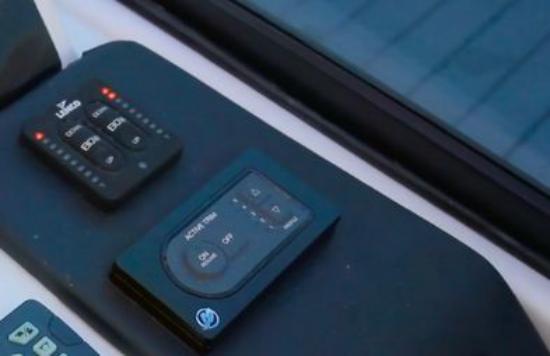 Outboard to starboard, our test model had Mercury’s ActiveTrim for the motors with Lenco trim-tab buttons that have integrated position indicators just ahead. 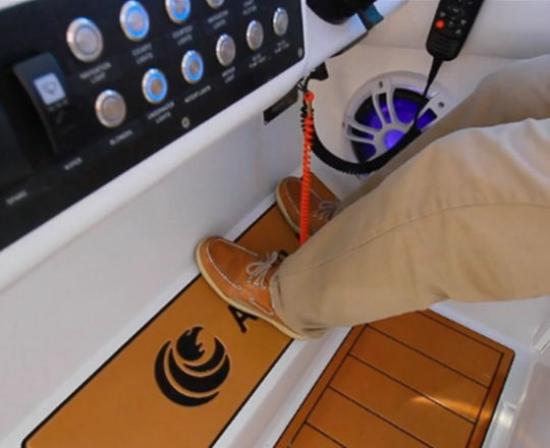 The driver can rest his feet on the raised angled support just ahead and to the left of the tilt steering wheel all the accessory switches illuminate when activated. 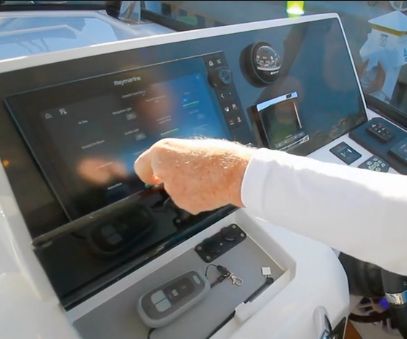 Beneath the Raymarine screen, the glovebox has a cushioned bottom to smooth the ride for cell phones plus connectivity plugs in the upper-righthand corner.

The Area can also be Filled in with a Sun Pad. There’s storage under the cushions and in large fender compartments outboard on each side forward. They flank an anchor locker that houses the windlass. In the gunwales there are grabrails and speakers.

The Aquila 32’s bow has a narrower seat to starboard and a wider one to port. Grab handles are outboard and across the bow.

The bow can be filled in with a cushion to create an area where adults could stretch out to tan or kids can hang out and play.

Aquila covers all of the details with raised grabrails, beverage holders, and speakers on each side in the bow. 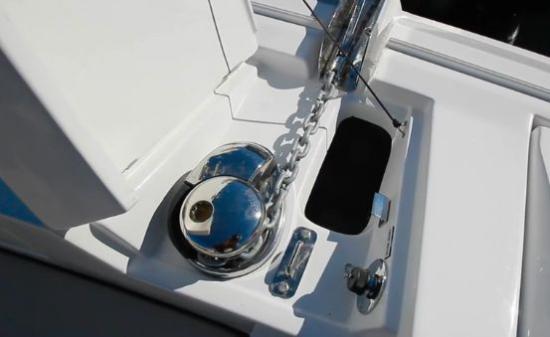 The centerline ground tackle system needs some work. There is no cleat to tie-off the anchor rode, and even though a bridal from the port and starboard bows will be used in most cases, we’d like to see one here for the lunch-hook. The access to the rode locker is too narrow, but there is a washdown bib at the right to clean chain and anchor. 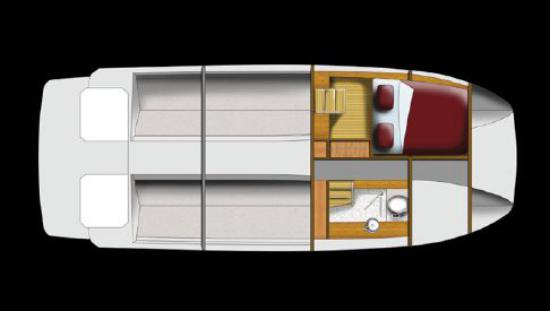 While the Aquila 32 is primarily a day boat, the belowdecks area has a cabin and head that could accommodate a couple for a weekend.

Outboard of the cockpit galley, a hatch opens to access the Aquila 32’s cabin, which has 6’1” (1.85 m) of headroom. We measured the berth at 80” by 55” (2.03 m x 1.4 m), which is close to queen size (80” x 60”/2.03 m x 1.52 m). There are hullside windows, a fan and a microwave oven if someone needs a coffee. A switch panel has the climate and battery controls and monitors. Removable covers provide access to the hydraulic lift pump and air conditioning and required batteries.

The berth is 5” (12.7 cm) shy of a queen but should be comfortable for two average-sized adults getting away for the weekend. Feet go forward where the pillows are.

The hullside window has an opening port so fresh air can be let in. 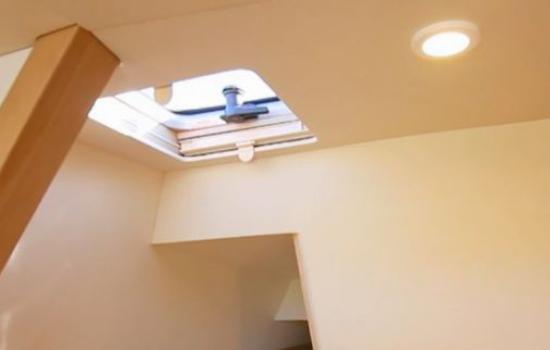 To get some ventilation, there’s also an opening skylight in the cabin.

Ahead of the helm in the console, the private head has 5’10” (1.78 m) of headroom and there is a forward window that lets in natural light. The toilet empties into a 21-gallon (80 L) holding tank and there’s a pull-up shower plus storage. 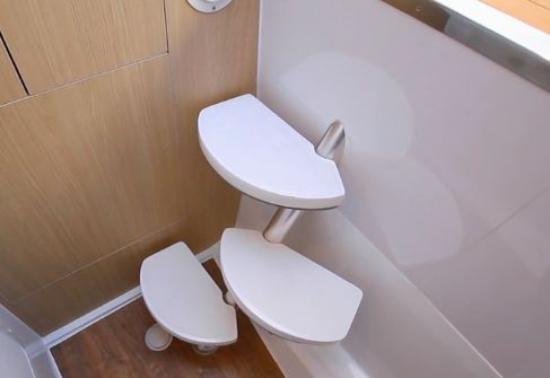 The outboards spun 15” pitch Mercury Revolution 4 four-blade stainless-steel propellers. Revving them up to 5900 rpm, we hit a top speed of 39.4 mph.

The Aquila 32 maintained a level ride even when we headed offshore.

The Aquila 32 has a CE Category B Offshore rating. Her twin hulls have integrated spray rails that worked well, producing a dry ride. Between the hulls under the deck, a wave-breaking pod eliminates the sneeze effect when a wave traps air beneath the hull and shoots spray forward, according to the builder.

During our test, we had calm conditions so we headed offshore to find some waves. She had plenty of buoyancy and the deck remained dry when we took on head-seas and re-entry was gentle. The ride in following seas was stable and the sharp bows cut through the waves easily. In turns, she maintained a level attitude and even in harder turns than most captains would attempt, there was no ventilation of the propellers. She did not sneeze during our tests. 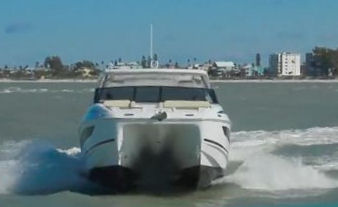 With her reversed chines and wave-breaking pod in the tunnel, the Aquila 32 is designed to keep the deck dry.

We can see the Aquila 32 being a popular vessel for day boaters. It has cleaner lines and better styling than fishing-focused offshore catamarans. The swim platform that extends past the motors is sure to be a hit and the cockpit has versatile seating and lots of it. The manufacturer lists passenger capacity at 16 and forward-facing seating at 10.

The depth of the sponsons gives the boat exceptional storage capacity and provides reasonable headroom in the cabin and head compared to V-bottoms of similar length.

Aquila offers the boat with three engine horsepower choices: 225, 250 and 300 in twin configurations, and Mercury’s Joystick Piloting System is an available option. The 250s on our test boat pushed the boat to decent speeds and had the power to move the boat where we wanted in tight quarters.

Although her 12’8” (3.85 m) beam seems quite wide, the Aquila 32 will still fit alongside another boat in a slip at most marinas. 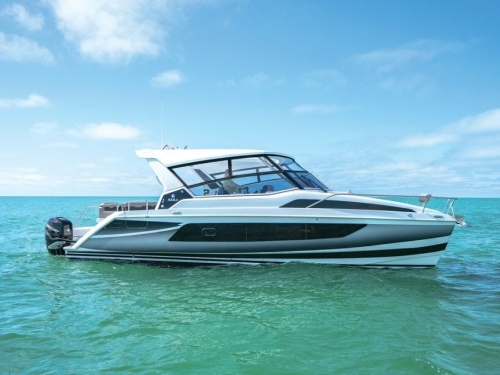 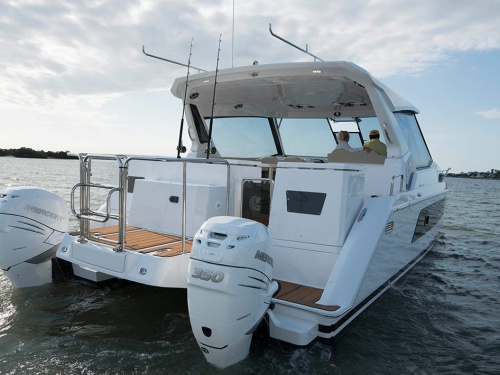 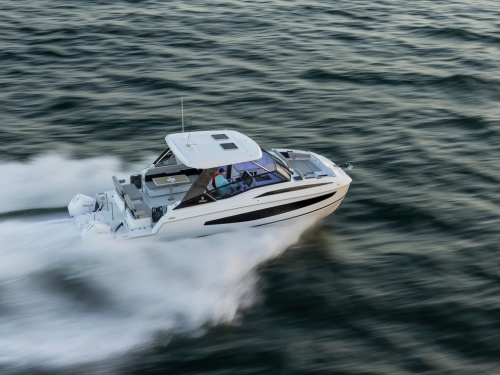