With a draft of just 15'' (0.38 m), the Grady-White Fisherman 180 is a good Coastal center-console, but with considerably more freeboard than most models in class. She's also economical to run according to company tests, delivering 4.70 mpg at 3800 rpms with a 150 Yamaha 4-stroke. Like all Grady-White's, she comes fully-loaded for fishing. 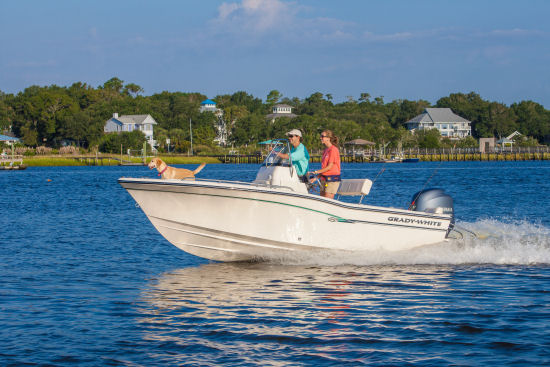 The Grady-White Fisherman 180 is a classic center console with a Rybovich-type sheer and lots of flare forward making her better able to handle sloppy conditions. Built with the same quality as Grady-White's larger boats, the Fisherman 180 is a premium-level CC that should appeal to anglers who have knocked around the waterfront for a few years and understand the difference between price and value in an open boat. She is the smallest boat that Grady-White makes and with the addition of a few options, she can be a fun towing boat. Because she is light and nimble, her 150-hp engine will get skiers up fast. In this way she becomes an all-around family boat for those who want to do fishing, swimming, beaching, and just cruising along in the cool breezes of early evening. All at a reasonable price. 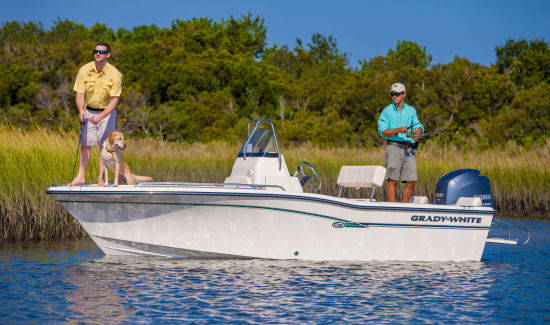 This picture illustrates how most angler buddies will use the Fishermen 180 when in shallow water.

The Fisherman 180 is a tried-and-true design in the Grady-White line, but this year's model offers some upgrades that may catch the eye of those who buy it for family fun as well as for hard-core fishing.

There's plenty of room underneath to stow a large cooler without taking up valuable deck space, though you'll probably want to add a couple of brackets or the ever-present bungee cords to keep the cooler from jumping around on long runs. 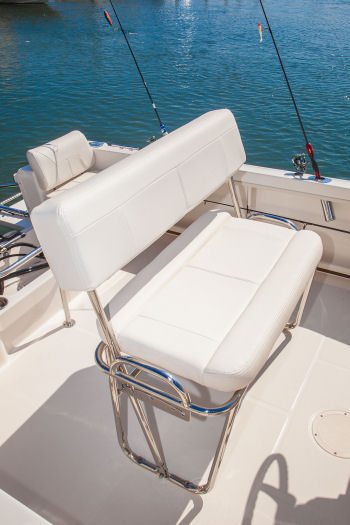 The helm’s bench seat has a reversible back with a stainless steel frame.

The big (89-quart) fishbox forward is characteristic of the care Grady-White takes with everything on its boats -- for example, hatches are finished inside as well as out to prevent mildew/mold from getting a foothold. These hatches are thick and strong to handle the pounding of heavy feet as anglers standing on them. Standard on the Fisherman 180 is an 11-gallon (41.6 L) insulated raw water livewell with light and overboard drain, located under the forward console seat. The raw water livewell has a full column inlet plenum, which prevents “dead spots” and allows for water circulation throughout. 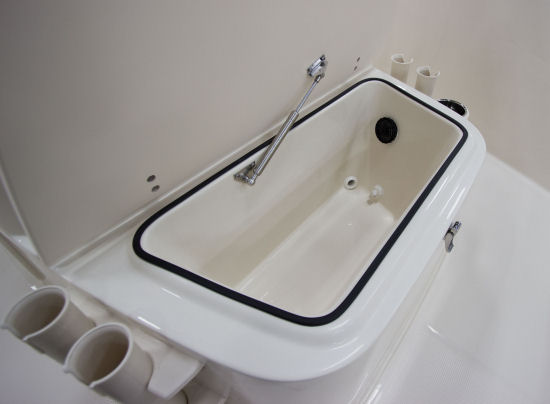 The lid is also gasketed, so that ice will last longer. The box drains directly overboard instead of to the bilge. (This box may wind up being a storage box on most boats, and when used for that purpose, the gasket should keep stuff inside as dry as anything can be in a center console boat.) It can also serve as a beverage cooler for an all-day party with a gang of people aboard. 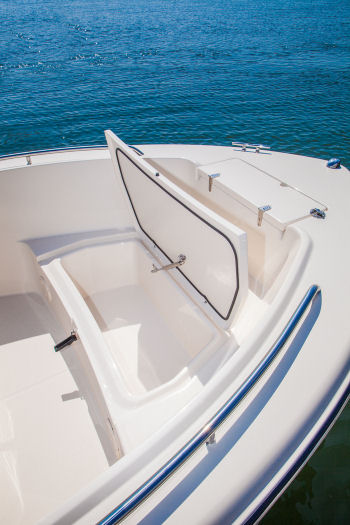 This 89 quart (84 L) fishbox is insulated and has a piston support strut and an overboard drain. Ice will last longer due to the gasketed lid.

The anchor locker at the bow includes stainless steel clips to fit the typical Danforth anchor when hung upside down, a thoughtful extra feature to help the hook from getting tangled in the rode. There's plenty of space here for the extra line that might be needed on those days when 5:1 is the minimum that will hold the boat in place. 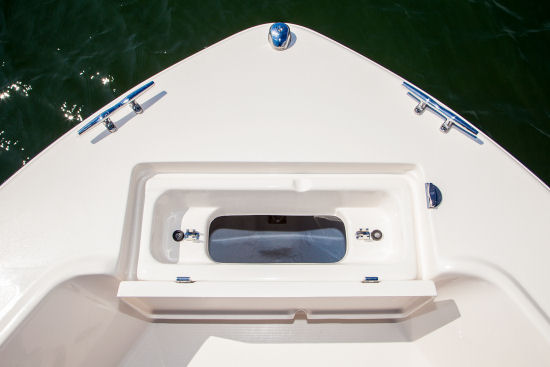 All the angling amenities are here, right where most anglers will want them; there are two vertical rod holders on each side of the console, four stainless steel trolling holders inset into the gunwales, and two horizontal racks with gasketed tubes on each side inset under the gunwales. 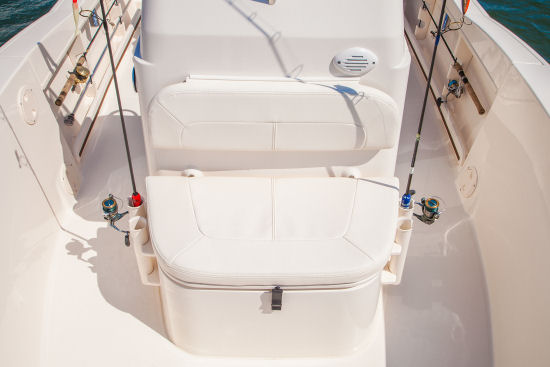 The console seat has everything handy for an angler: 2 rod holders on each side, 4 stainless steel trolling holders, 2 horizontal racks with gasketed tubes, as well as a cooler underneath the seat.

Toe rails along each inwale give anglers a place to brace when they're slugging it out with muscular species like AJ's or tarpon and the fact that the cockpit is self-bailing means that washdown can be accomplished by bucketing some water across the decks as needed. (Optional freshwater and saltwater washdown hoses are available.) 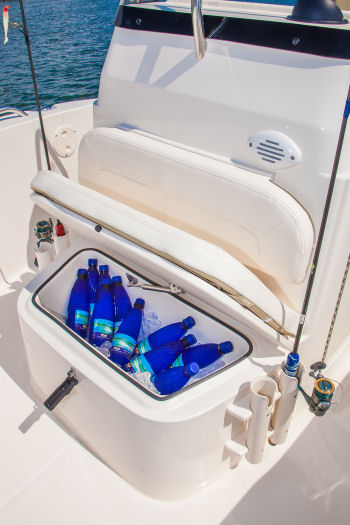 The console’s front 45-quart ice box also includes piston support and has rod racks to the side.

The 45-quart insulated ice box on the front of the console can be plumbed as a livewell. Though it would be small for fragile baits like scaled sardines, it's just the right size for shrimp, crabs or killifish, among other likely morsels. The top of this compartment is a heavily padded seat.

While there's no question that the Fisherman 180 is a dedicated fishing boat, she can also double as a watersports platform by ordering a few options. Add the swim platform, the ski pylon and the bow cushions, along with the Bimini top and the Fisherman 180 becomes an all-around runabout/tow boat that offers plenty of speed and sporty handling to please the kids who might want to go swimming or get involved with towing sports.

Most boat builders don't like to call any of their boats a "utility" boat, but the simple fact is that an open boat such as the Grady-White Fisherman 180 can be used for all sorts of boating activities, including just plain-old cruising around. With places to hang out all over the boat, the muscle of a 150-hp engine that can make the boat go 46-mph, there is very little that she cannot do. That gives the 180 great "utility" in our book. 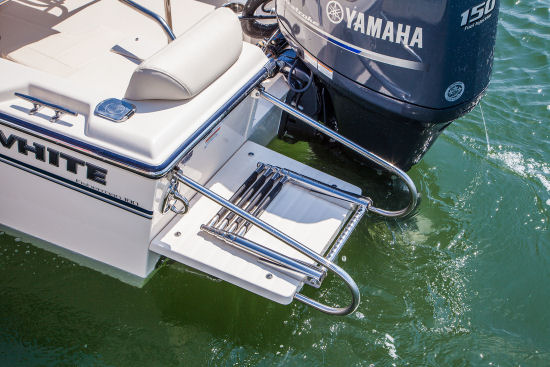 If watersports are part of the boating mission, then the optional swim platform with a stainless steel ladder is something that should be considered.

The Fisherman 180 is rated to carry 7 passengers. Starting aft, there are two jump seats port and starboard of the outboard well. They are probably the most comfortable places on the boat. The leaning post is also a seat for two, and with its reversible backrest, it can be used for trolling and watching baits, or for spotting a skier. Forward of the console is the customary forward-facing seat that almost all center consoles have. And forward is a casting platform that has optional cushions. With this cushion in place, two people can comfortably sit here. 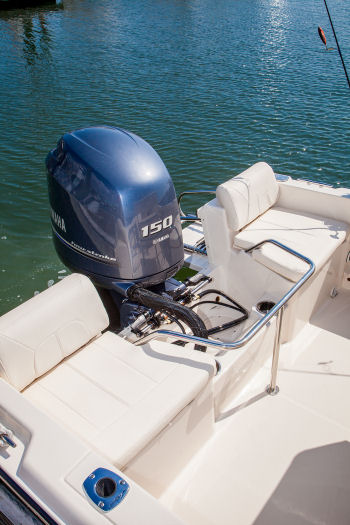 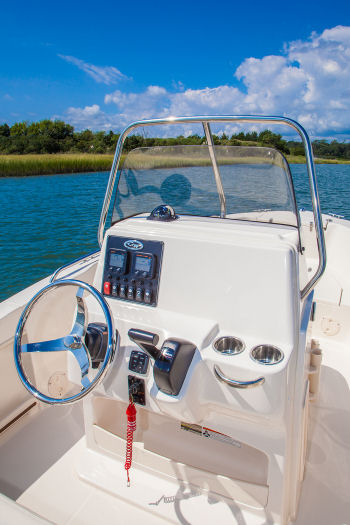 The broad vertical space on the console offers plenty of room to flush-mount a 12’’ sonar/GPS system. A self-leveling Ritchie compass, mounted in the captain's direct sightline, is standard, as is the stainless steel steering wheel and a pair of stainless drink holders on the starboard side. The Grady-White panel includes digital readout of engine functions and fuel levels, with lighted rocker switches and waterproof breaker trips on the face for quick access -- that means no headstands when a wire overloads on this boat. 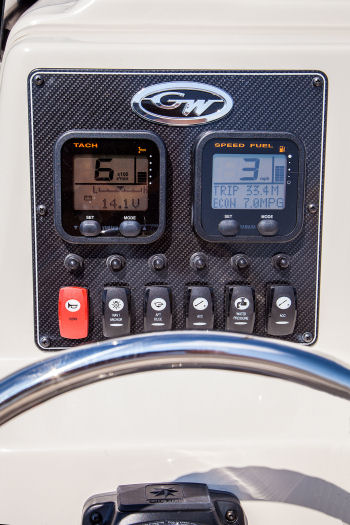 The acrylic windshield has no frame, usually a negative, but in the case of the Fisherman 180, a heavy-gauge stainless steel railing runs just outside the edges of this shield, protecting it as well as providing a very usable grab rail for anglers standing at the console during an offshore run.

We have not yet tested the Fisherman 180, but Grady-White offers these test results, based on F150-hp Yamaha power turning a 14 1/4 x 18 Reliance SDS prop: 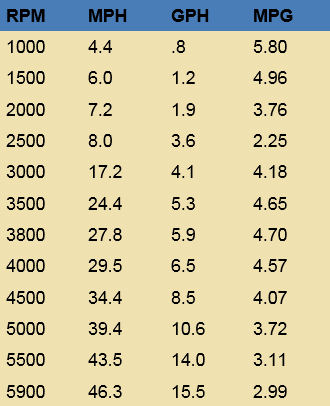 As can be seen in the table above, best cruise was at 3800 rpms and 27.8 mph, where the package consumed 5.9 gph and delivered 4.7 mpg -- a number that will make owners happy when they visit the fuel docks. Note that with a 54-gallon fuel tank, this boat has some serious range. Top speed, 46.3 mph at 5900 rpm, is about as fast as any boat in the genre with 150 horses.

Grady-White uses what it calls the SeaV2 bottom on its entire line. It is a C. Raymond Hunt & Associates design that combines a 19-degree deadrise at the transom with a progressively steeper angle running forward to the entry in order to cut through waves. This is a good compromise between a good ride and good performance. With a 19-degree deadrise and hard chine flats the boat has stability at rest, certainly more so than a boat with a deeper V-bottom. 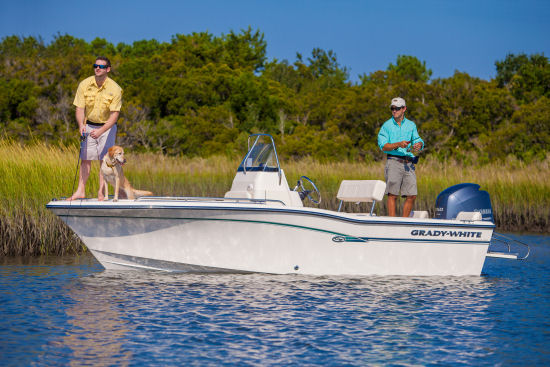 The Grady-White Fisherman 180 is made to fish. Note her tall freeboard and nautical sheer line.

Everything is top-grade in Grady-White construction and that is why the brand has been so popular over the years. The quality of the stainless steel used by Grady-White is a case in point: it is 316 stainless steel, not lesser grades (such as 306) that we sometimes see. The hardware has a shine and deep luster that not only looks great when new, but that will last for many years around saltwater.

Below decks, all wire runs and hoses are neatly run and carefully clamped to stay put during long, hard service in the briny. All thru-hull fittings are stainless steel. Also worth noting is that Grady-White uses a cored deck for strength. The piston-assist lids on the ice chest/livewell in front of the console and on the bow fishbox are premium pluses, making access much easier.

The Fisherman 180 is fully self-bailing, which is a huge plus for security when headed offshore. And for those nights when you have to leave the boat in the water, there's no need to worry about a big rainstorm sinking her at the docks. In fact, we won't buy an open boat that did not have a self-bailing cockpit.

Grady-White offers only Yamaha power. The company has had a long and successful partnership with Yamaha, and though some dealers offer other outboard engines, it's rare to see a Grady-White anywhere in the country with anything other than a Yamaha on the transom. The boat is rated for a maximum of 150 horses, and given the 2,150-lb. (975 kg) weight, it would probably be wise to stick with the maximum to assure good hole shots with a full load of anglers, fuel, gear and ice. (Yamaha just released an upgrade of its F150 that's even lighter than before, and also is an engine that reportedly delivers increased torque as well as top-end speeds.) 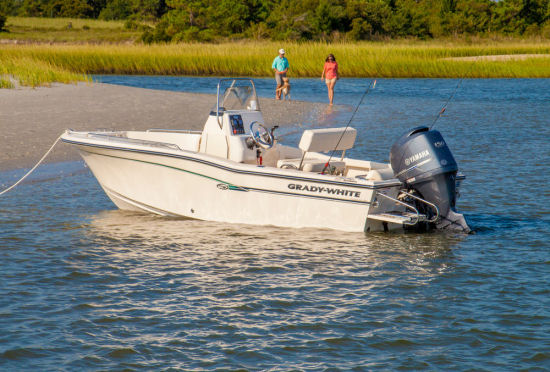 A Bimini top is an option for well-needed shade.

Grady-White does not make pricing available on either its boats or its optional equipment: Prospective customers can find a list of nearby dealers at www.gradywhite.com. 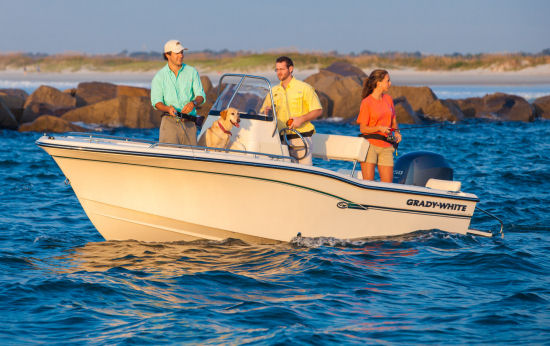 Note the freeboard height at the bow, something that sets this 18-footer apart from many 18' (5.49 m) bay boats.

The Fisherman 180 has higher freeboard than many in this size range, moving her into an all-around coastal center console, as far as we're concerned. In capable hands, she can take on a fairly serious chop in near-shore waters and on the large lakes, as well as running moderately rough inlet. The resulting added cockpit depth adds to security for those aboard, too. A 15’’ (0.38 m) draft makes her backwater capable, though one wouldn't take on an ankle-deep bonefish flat in this hull. Finally, there is something very intangible and personal -- it is the pride of ownership. Owning a Grady-White for most people we know -- no matter what size it is -- is a matter of personal pride in owning a boat well done. 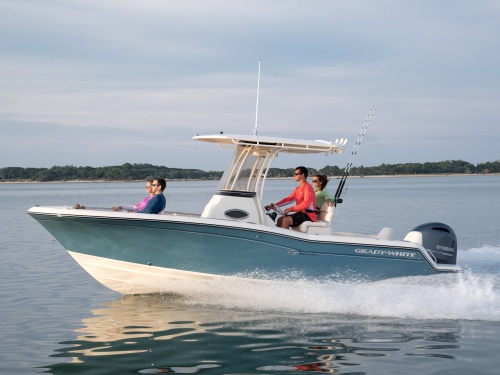