Ocean Craft Marine is known for building military vessels that may have to endure rugged conditions, and their Hypalon RIB needs to be a tough, durable craft and light weight. It also must have high performance and shallow draft. The 9.5 M we tested was specified with twin Evinrude E-TEC G2 300-hp outboards. She ran 55.0 mph in our tests, jumped on plane in 3.3 seconds, and went 0 to 30 mph in 5.5 seconds. This, for a boat with a very substantial test weight of 6,920 lbs. (3,139 kg) is impressive indeed. 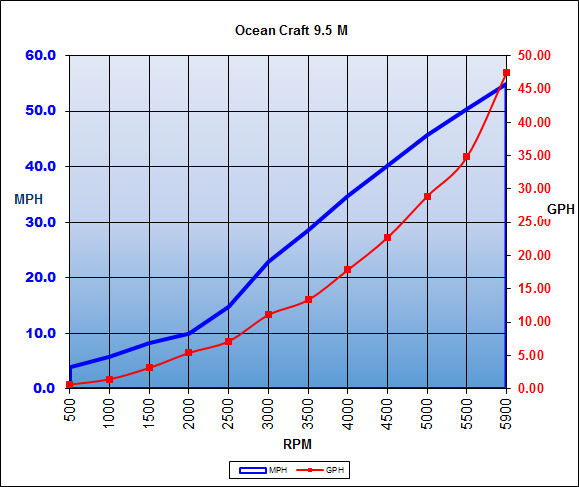 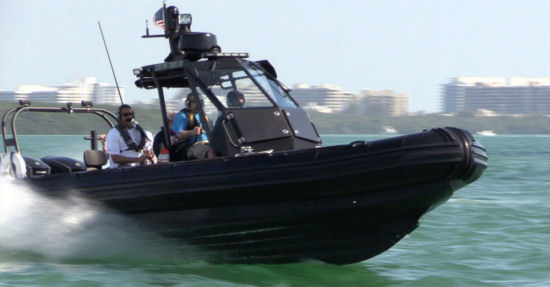 Ocean Craft Marine specified a pair of Evinrude E-TEC G2 outboards on the 9.5 M VI-BTD because of their fuel-efficiency, reliability and low maintenance requirements.

Ocean Craft Marine designed the 9.5 Meter Vessel Interdiction and Boarding Team Delivery Craft (9.5 M VI-BTD) to be a rigid hull inflatable boat that can be pulled alongside another vessel to transfer a boarding team underway at speed. She measures 31’2” (9.5 m) with an inflated beam of 10’5” (3.17 m) and a deflated beam of 8’3” (2.51 m), which means it can be loaded into a C 130 cargo plane or trailered on-road without wide load permit.
When powered by a pair of 300-hp Evinrude E-TEC G2 outboards, she tops 55 mph and can run through just about anything thanks to her V-bottom design and shock-absorbing seats and helm console. 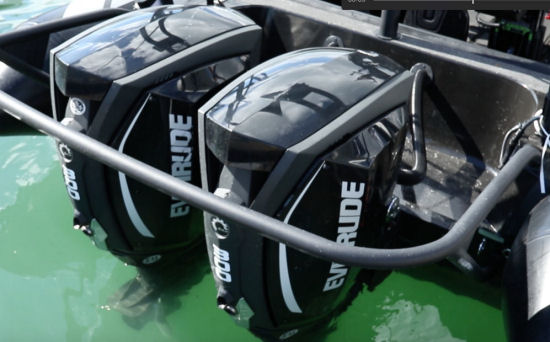 With twin 300-hp Evinrude 2-stroke outboards, the boat hit a top speed of 55 mph and can maintain that pace in ugly conditions.

Ocean Craft Marine (OCM) builds boats for military and commercial applications which are in the “no-failure” zones of operation. That means that everything going into these specialized boats must meet high standards of strength and reliability.
It was for that reason that the builder specified twin Evinrude E-TEC G2 300s for the 9.5 M VI-BTD. Because these engines have over 100 fewer parts than conventional 4-stroke outboards, internal steering and gear shift that are impervious to the elements, a magneto electrical system so that it is not vulnerable to slipping belts, and an internal lube reservoir, among other features, the builder deemed these engines to be the best for this particular 9.5 M application.

The entire helm console is engineered with a system that absorbs shocks on three axes, fore to aft, side-to-side and corner-to-corner. As conditions worsen, the shock absorbers stiffen to better dampen the ride.

Each crewmember wears a wireless headset with a voice-activated microphone. The radio can interface with the VHF and a total of four different communication networks including a cell phone.

It can see what’s behind the boat at all times.

The Concave Reverse Chine Designed hull bottom is designed to be able to execute turns at full throttle without incident. 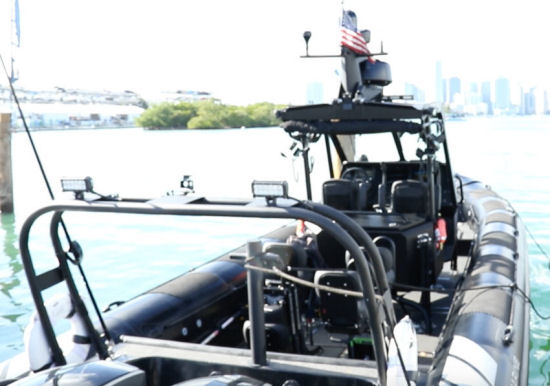 Our test boat’s cockpit is equipped with four Shockwave shock-mitigating seats that feature shock absorbers made by Fox Racing, a manufacturer best known for its work in motocross and off-road racing. The boarding team members straddle the seat as he would if riding a horse and has a grab handle to hold onto.
The seats fold down if more aft-deck space is needed and there’s a conventional bench-seat running across the stern that could seat three or four people.
Running along the tubes on each side are large hooks to which passengers can secure tactical gear brought onboard. The inflatable tube-set has large nonskid pads that facilitate stepping aboard and the entire deck of the boat is finished in a nonskid rubber mat. 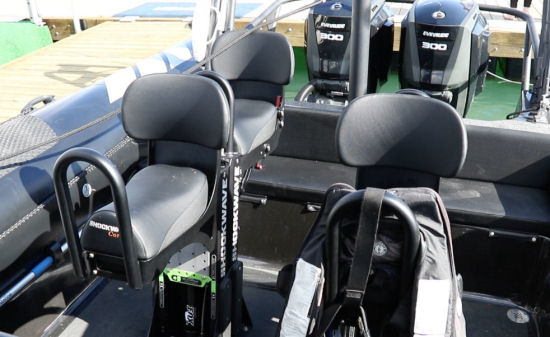 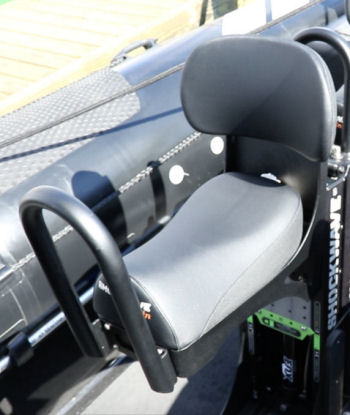 This close-up photo shows how thickly padded the saddle-style seat is. 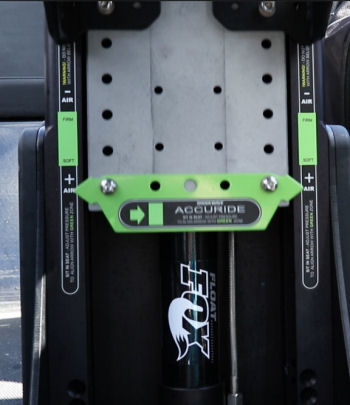 Each seat’s shock absorbing system can be fine-tuned for the size and weight of the passenger and the prevailing sea condtions. 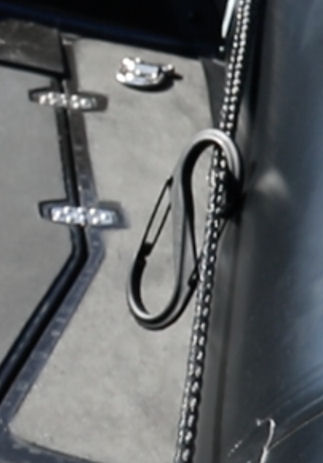 These large carabiner-style hooks are secured to a rope on each inwale. They provide a means for securing tactical equipment underway.

While the individual seats in the cockpit have their own shock absorbers, the entire helm console is on its own shock-mitigating system also developed by Fox Racing. The whole structure sits a full 12” off the deck and has four large pneumatic shocks on each corner plus a series of smaller pneumatic pistons underneath, all of which dampen the ride in rough conditions. 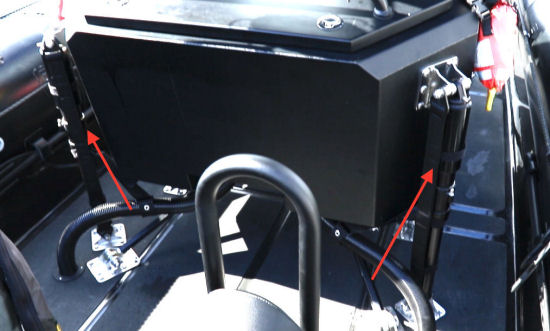 These are the shock absorbers on the aft corners of the console. 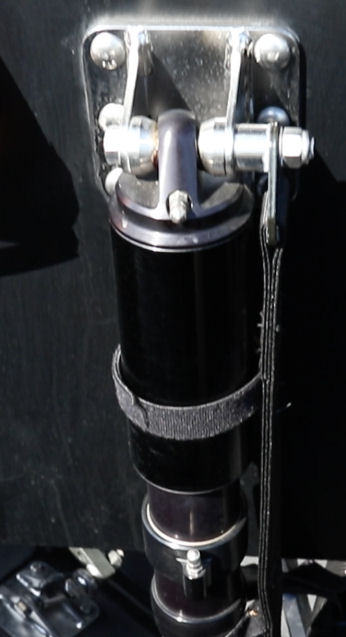 This is the upper half of one of the two heavy-duty shock absorbers on the front of the console.

The boat coxswain and a navigation-officer transit in high-backed shock-mitigating bucket seats also made by Corbin Seats. They’re angled slightly aft with the thigh supports raised to position the occupant in as secure a riding position possible. Each has padded armrests and folding grab handles equipped with motorcycle handlebar grips that let the rider hang on during a rough ride.
Ocean Craft Marine equips the boat with seatbelts, but our test captain, a former powerboat racer, opted not to wear his. 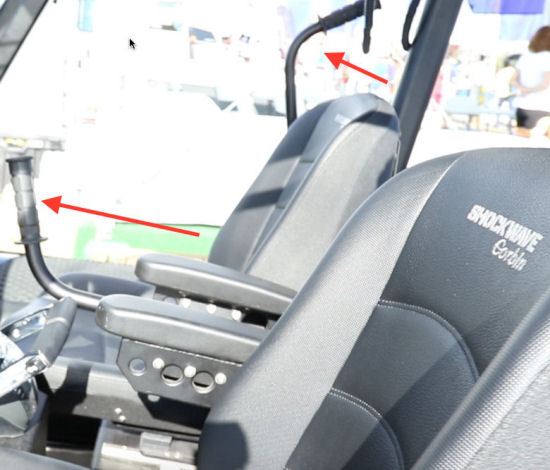 The captain and a companion ride in aft-angled seats designed to keep them in place and these fold down grab handles provide extra security.

We would expect the dash of a boat designed for such serious use to be equipped with a plethora of equipment – and it is! For navigation, the carbon-fiber panel includes two Garmin 7610 multi-function touch screen display that serve multiple functions including chart plotter, side scan sonar, high-definition radar, engine telemetry and more.
There are also two cameras on board, a FLIR M-324XP articulating thermal camera that is operated with its own control, and a Garmin GC-10 color-video and low-light infrared capable camera that faces aft and acts as a rear view mirror. It’s displayed on the Garmin multi-function screen.
The steering column telescopes and tilts so the driver can customize his operating position. The digital shift/throttle controls is mounted on an ergonomic bump-out. The boat is equipped with 100 watt loud hailer, Whelen Siren System and police LED light bar on the hinged, folding mast. 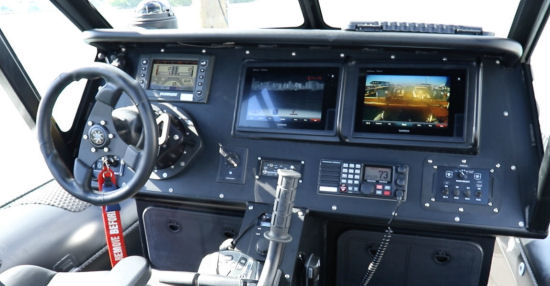 The Evinrude ICON 7 screen is just above of the steering wheel while navigation information is provided on the center screen and the aft-facing camera is shown to starboard. 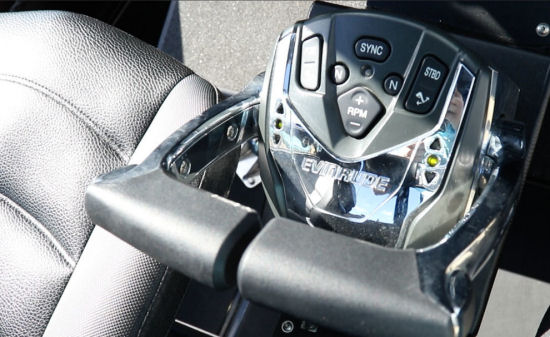 The Evinrude digital shift and throttle controls are close to the driver’s seat so he can place his hand low on the binnacle and operate both motors with a single lever while the engine sync is engaged. This gives him more precise control in rough sea condtions. 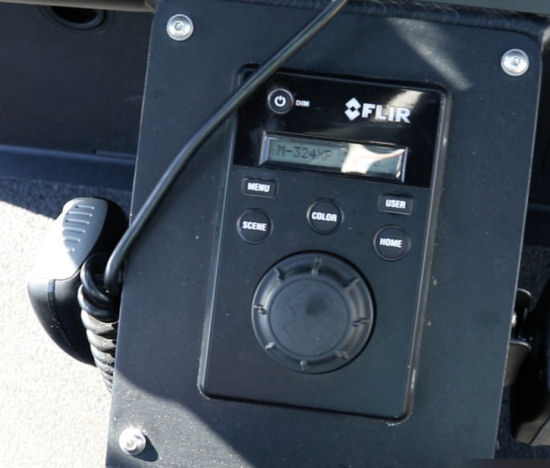 Just ahead of the shift and throttle levers is the control for the FLIR thermal camera.

The vessel’s communication system is provided by David Clark Company, which makes systems for the aviation, marine and other industries. Each passenger wears a wireless headset with voice-activated microphones and if a tactical unit is boarding a hostile vessel members can stay in touch with the driver of the 9.5 M VI-BTD throughout the operation. Additionally, the VHF radio, cellular phones and other devices can all be interfaced into this network. 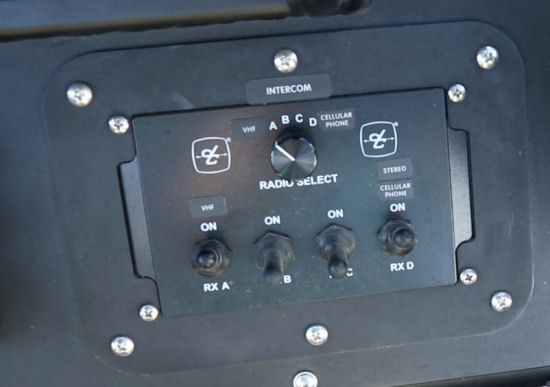 This switch panel controls the on board communication system that can be interfaced with up to four networks. 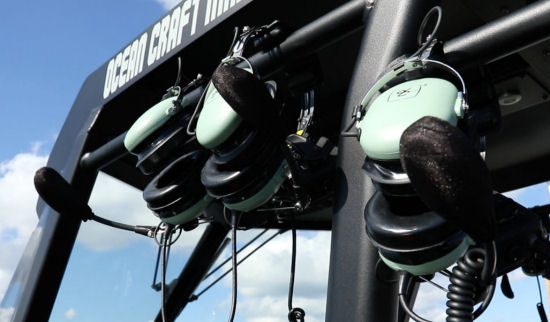 Each passenger wears one of these wireless headsets and even the on board stereo can even be piped into them, provided everyone can agree on a style of music. 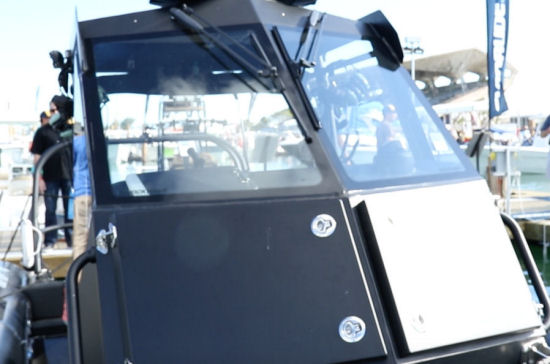 These hatches close on watertight seals with double latches. 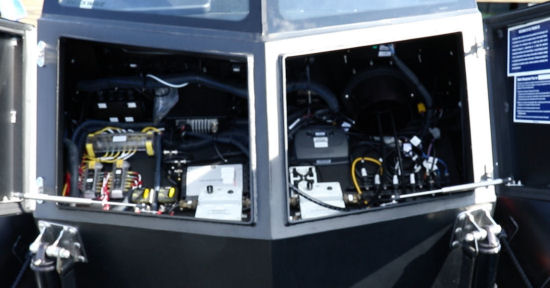 It’s important that no water enter this compartment because basically all of the connections for the navigation and communications systems are stored in here. 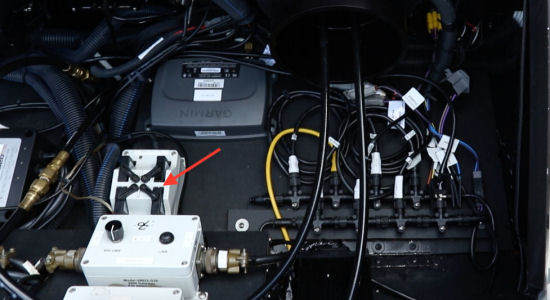 The charging base for the headset batteries is in the console so there will always be fresh ones at the ready.

A hatch in the step up to the bow opens to reveal a good-sized locker. The anchor locker is in the foredeck and it has plenty of space for ground tackle and a rode. Just forward of the anchor locker is a heavy-duty bollard. There’s a similar taller bollard aft ahead of the outboards. 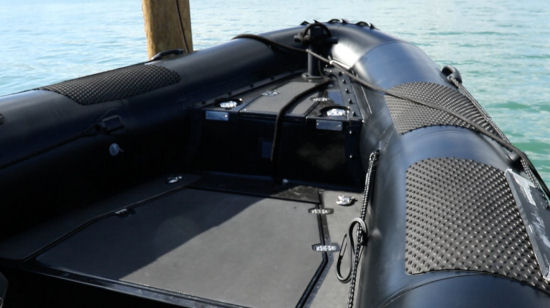 The bow has lockers in the two steps and a heavy-duty bollard. 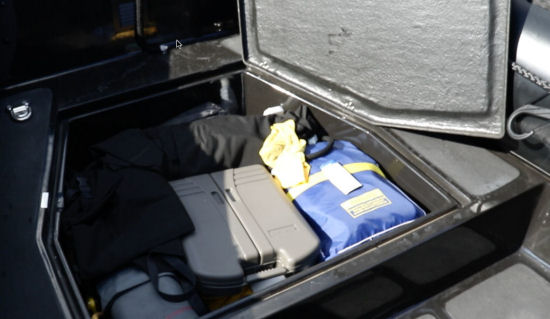 This locker in the bow has a deep scupper around the opening to ensure that the contents stay dry. 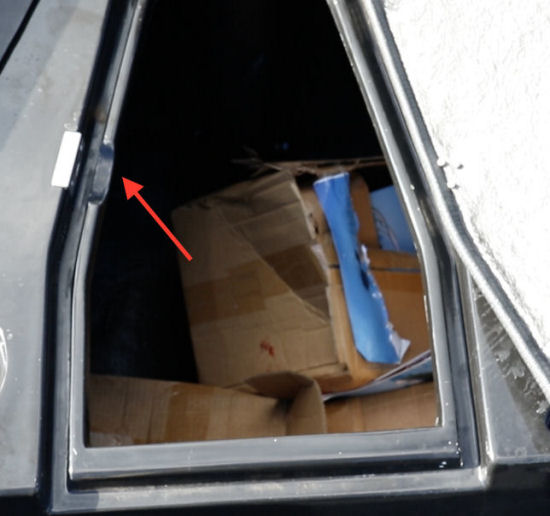 The opening for the anchor locker is notched for the rode to pass through when the hatch is closed.

The Evinrude E-TEC G2 300 is probably the most technically advanced outboard engine on the market in class. In a nutshell, this 3.4 L engine provides 4-stroke fuel economy at cruising speeds with 2-stroke torque at the low and mid RPM ranges. Its strongest suit, however, is its low-maintenance design which integrates this steering and gear shifting into the body of the engine with no external rods or cylinders. Scheduled maintenance isn’t required for 5 years or 500 hours.
The E-TEC G2 has an internal oil reservoir, an 81-degree tilt range, and has auto-winterization. Its beltless magneto system is more reliable than the automobile-type alternators used on most other outboards. The engine was designed from the beginning to be saltwater-ready and carries a 5-year factory backed warranty which includes corrosion. 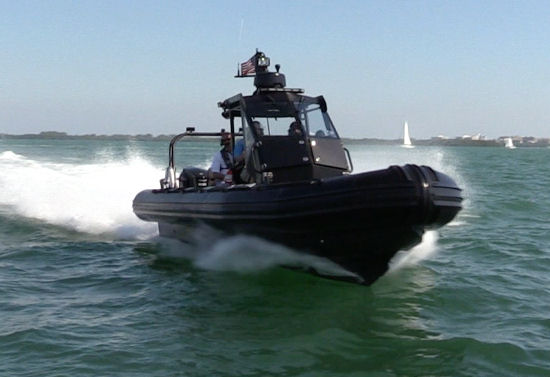 Ocean Craft Marine designs the boat with what it calls concave reverse chines and two lifting strakes per side. When we were running at top speed, Ocean Craft’s representative basically dared our test captain to crank the wheel hard over. He did so in each direction and the boat came right around cleanly.
The 9.5 M VI-BTD is one of the best handling boats we’ve driven. When running in rough water, the hull’s V-shaped entry carves through the waves and the tubes dampen the impacts. With the shock mitigating seats doing their job, the physical effects on the crew are minimalized. 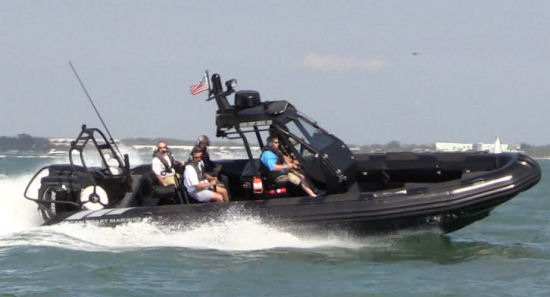 With her reversed, concave chines, the 9.5 M VI-BTD can turn as hard as a driver can crank the wheel. 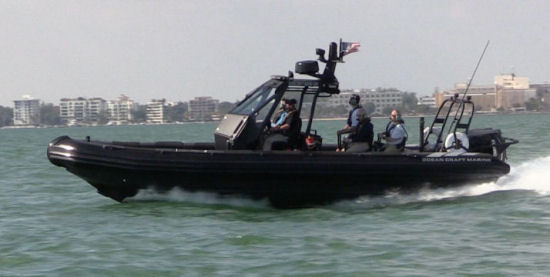 When running in waves, the tubes dampen the impact on re-entry, making the ride much smoother.

The 9.5 M VI-BTD’s rigid hull and deck are formed out of fiberglass. The tubes are Hypalon 1670 Dtex material with seven air compartments and intercommunicating inflation/deflation and pressure relief valves. Nonskid step pads are on top of each top to improve traction when the boarding team is transferring to another boat during an operation.

This photo of another Ocean Craft Marine hull shows what it calls its “double concave reverse chine” design. The builder says gives it the ability to make sharp turns at high speed. 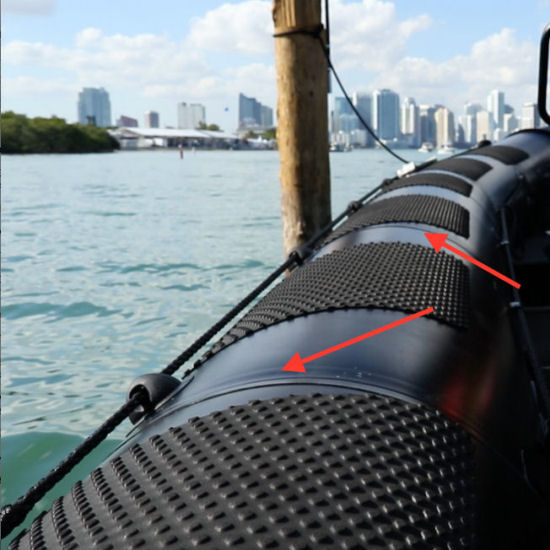 Each tube has seven individual chambers so damage from a puncture will be limited to a small area.

Obviously, this is a craft designed for a unique purpose, but some elements of the 9.5 M VI-BTD’s design and some of the equipment on board our test boat could be applied to a pleasure craft.
The RIB design with the inflatable collar or tubes could be a good choice for yacht club tenders or other boats that are frequently used to ferry passengers between vessels. The shock mitigating seats could be a consideration for owners of boats who spend much of their time in rough water and the aft-facing camera can serve many purposes.
With its high-speed handling and cushioned rough-water ride, this is a boat that we could recommend for commuting around islands in such places as the Bahamas, Virgin Islands, Indonesia, the Maine, Norway British Columbia Coastal Island, or other applications. Certainly this is not a boat for everyone, but for those who need something reliable, fast and with considerable range off shore, the 9.5 M VI-BTD could be the answer.

Ocean Craft Marine began by building rigid inflatables for the offshore racing circuit world-wide. Later it got into the commercial, workboat, military and recreation inflatable markets. The company makes inflatables with high load-carrying capacities (in excess of 1.5 tons in some cases) and it says it can make inflatables that will run in excess of 100 kph in 1 meter seas.
The company says that it builds boats in a ISO 9001 state-of the-art facility and its headquarters is in Annapolis, Maryland.