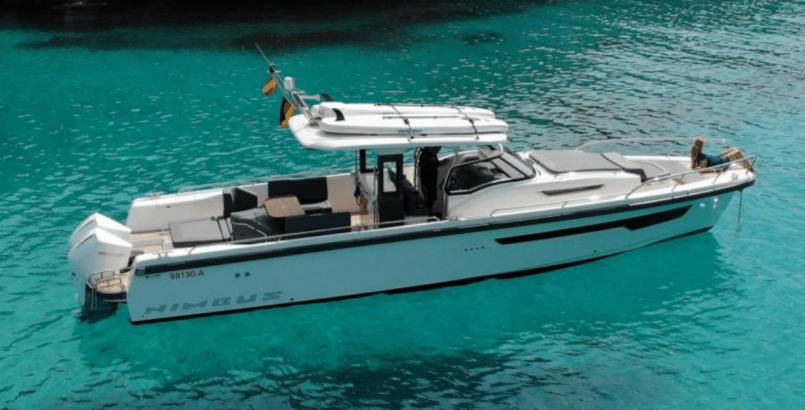 During the second half of the 20th century, thanks to the advent of fiberglass, boat building took off in Europe just as it did in the U.S.  Scandinavia, having a long tradition of sea faring, and literally thousands of islands to explore was natural place to take an early lead in recreational boat building in Europe.

The term “Scandinavian Design” in the 1970s in both sailboats and powerboats were, of course, designed and built in the Nordic countries for the people living there – not for Americans. These boats had distinctive characteristics. Powerboats, for example, tended to be in the 20’-30’ (6-9.14 m) range, propelled by single, small diesels (because gasoline was so expensive) that would push the boats at displacement speeds.

These boats tended to have high freeboard, protected cockpits and cozy, if cramped, accommodations for a family of four. This suited families in Northern Europe in the 1970s as a boat became their summer cottage, and adventure vacation vehicle at the same time.

Today, “Scandinavian Design” connotes something quite different.  Currently, its new boats have captured the imagination of boaters around the world. This is the story of the leading Swedish builder – Nimbus.

A Short History of Nimbus

In the 1960s Volvo Penta ran into a brief period of trouble over finding customers for their engines. A suitable pleasure boat was required and managing director Harald Wiklund ordered the perfect boat designed by Olympic sailor Pelle Petterson. Pelle called the boat “Nimbus” and in September 1969 the first test drive was made over the waves of Lake Vänern.

Lars and Hans Wilklund, sons of Harold, had been avid boaters all of their lives in both racing powerboats and sailboats. Almost overnight, they found themselves in the boat-building business, and the following year the Nimbus 26 won the European Boat of the Year award. Over three decades, assisted by the most knowledgeable and loyal people in the Swedish boat building industry, they built up one of the largest boat building concerns in Europe.

An aside: Hans and Lars’ father as General Manager of Volvo Penta headquartered in Gothenburg, led the engine company from 1949 until 1977. Wiklund is generally credited with taking a small Swedish engine company and turning it into an international powerhouse supplying engines and related product for hundreds of industries, making Volvo Penta what it is today..

He is the one who set in motion Jim Wynn’s design for a sterndrive which Volvo Penta introduced in 1957, calling it the Aquamatic.

Building on that early success, by the 1980s Nimbus had consolidated its position as the leading Swedish producer of leisure boats. A partnership with another Swedish powerhouse, the tennis superstar Björn Borg, was an obvious marketing program.

Also in the 1980s, a group of Norwegian buyers traveled to the Nimbus head office in Långedrag, and then sailed their new yachts home in convoy, covering 475 nautical miles in a three-day voyage back to the Norwegian port of Bergen. That crossing in 1984 kicked off a tradition that would last for the following 15 years, strengthening the bond between Nimbus and its customers.

Nimbus soon became a marquee name throughout Europe, where it joined forces with the legendary Italian designer Nuncio Bertone to create the limited-edition Nimbus 26 DC Epoca, which became a classic and one of the most sought-after boats in the company’s history.

The Swedish King celebrated his 50th birthday on the 30th April 1996. Because he and the queen were ardent boaters, members of the royal yacht clubs spotted around Sweden took up a collection to buy the King a present.  They selected a Nimbus 19 Nova fitted with an Evinrude 115hp outboard.

In 2000, the Nova R series was introduced, and it was the first serial-produced model with step hulls for Nimbus. Four years later, serial production of vacuum-injected hulls was started in connection with the launch of the Nimbus 380. One year later, Nimbus E-power was introduced with the launch of the fully electrically powered prototype Nova 27 – years ahead of the current crop of electric boats.

After the Great Recession, Hans and Lars sold Nimbus to R12 Kapital AB. During the period from 2012 to 2018, the product portfolio was updated in its entirety through the development of new boat models. Nimbus Group also expanded its dealer network. At the same time management executed is strategic decision to create a “House of Brands.”

This infusion of fresh capital put Nimbus on a course to be where it is now, one of the most advanced builders in Europe.

Nimbus Group has been in a growth phase since 2018, partly through the acquisitions of Alukin Boats Sweden AB, an established manufacturer of aluminum boats, and Bella-Veneet Oy, with the Bella, Flipper, Aquador and Falcon brands. These brands are generally smaller boats than what Nimbus is building these days, and they give the company’s European dealers a full line of boats, from small to large.

The brands from Bella-Veenet, which accounted for 35% of net sales in 2019, are a significant part of today’s Nimbus Group strategy. We’re told that it won’t be long until some of these brands will follow the mother ship Nimbus to North America. Generally, these boat brands are practical and value-oriented, and in tune with the future of boating.

North American Landing. In 2017 Nimbus entered the U.S. in a quiet way with just a couple of outlets.  The idea was to gauge the acceptance of the product and its suitability for satisfying the desires on American boaters. In 2019, Nimbus sales in the North America were about $5 million. With the official launch of an office in North America, Nimbus Group hopes to reach even more boaters in the US for years to come.

The Nimbus Culture of Boat Building

When it comes to the design and build, Nimbus has what it calls a “holistic” view, in which functionality is central.  That means they are no one-trick ponies in its fleet, and practicality trumps gimmicks. It also means that they are built to the highest standards.  Not just CE standards, or ABYC standards, which go without saying, but also to a still higher authority.

The three letters “DNV” -- Det Norske Veritas – are proudly displayed on Nimbus boats in an understated way, but their meaning is hugely important. DNV is one of the most highly renowned marine certification agencies in the world. They have standard and certification from everything from Nimbus boats, to superyachts, to ocean-going commercial shipping. All Nimbus boats are tested and certified by DNV.

We know of no other production recreational boat builder in the world that has anything like this degree of certification.

Nimbus Coupé hull designs are based on what the company has termed the “smart speed concept,” which places comfort and safety ahead of speed. This design concept aims to optimize comfort and reduce fuel consumption at cruising speeds from 0 to 22 knots (25.3 mph), with relatively deep hulls to improve handling in head seas. This design, the company says, also enhances maneuverability and performance at low speeds. (Perhaps move this section after “The Nimbus Design Concept” where we then see the photo of the 365 Coupé?)

The hull shape is hard chine with concave cross sections to cushion the ride and provide lift. The transom is lifted with a propeller tunnel that kick upwards at the transom, which keeps the bow down.

Above the chine there is an additional chine to offer additional stability and better spray deflection. At the center of gravity, the deadrise is 21.5 degrees, but towards transom the hull flattens out to enhance fuel efficiency and increase speed.

Design for Commuting and Entertaining

The lifestyles of boaters in Nordic countries have evolved since the 1970s, when a boat could double as a summer cottage. Today, a full 25% of Swedish households have summer cottages on land – many on islands in the archipelago on the eastern side of the country.

The result is that their boats now serve two purposes: 1) commuting from the main house or work, to the summer house, and 2) dayboat entertaining when at the beach house, or moored in a city marina.

The “commuting” function of Nimbus boats means that to get the family home, sometimes the boat must be taken out in sloppy conditions. That requires that the boat ride well at reasonable speeds, be dry, and stable.

Scandinavians are also very quality conscious. They are not extravagant, and shun garish bravado.  Rather they highly prize exquisitely designed and built boats that that signal elegance and class in an understated way.  That is what one will find on any Nimbus boat.

For the first time ever, Nimbus Group will present its own factory display at the 2022 Fort Lauderdale International Boat Show. With the recent opening of the US office in Annapolis, Maryland, the Group is officially planting a flag in the States and in doing so, hoping to reach more boaters interested in the Nimbus product offerings.

Be sure to visit the brand-new Nimbus exhibit on Dock B210-216 on the Southside of the Bahia Mar and discover the Nimbus Tender 11, Tender 9, Tender 8, and the 365 Coupé. Product experts from Sweden as well as representatives from dealerships around the US will be present.

Nimbus has asked us to invite all BoatTEST members to join them on Thursday, October 27th at 3PM for a Swedish-inspired “Fika Launch Party” where they will offer coffee and sweets and a chance for our members to get to know the Nimbus Family.