Yes, you can have it all. And it's all in one package with the Canyon 336. This model has been around for quite some time, but Grady-White has recently upgraded the boat to include a boatload of features thanks to listening to the voice of the customer. The result is a 336 that's better than ever. 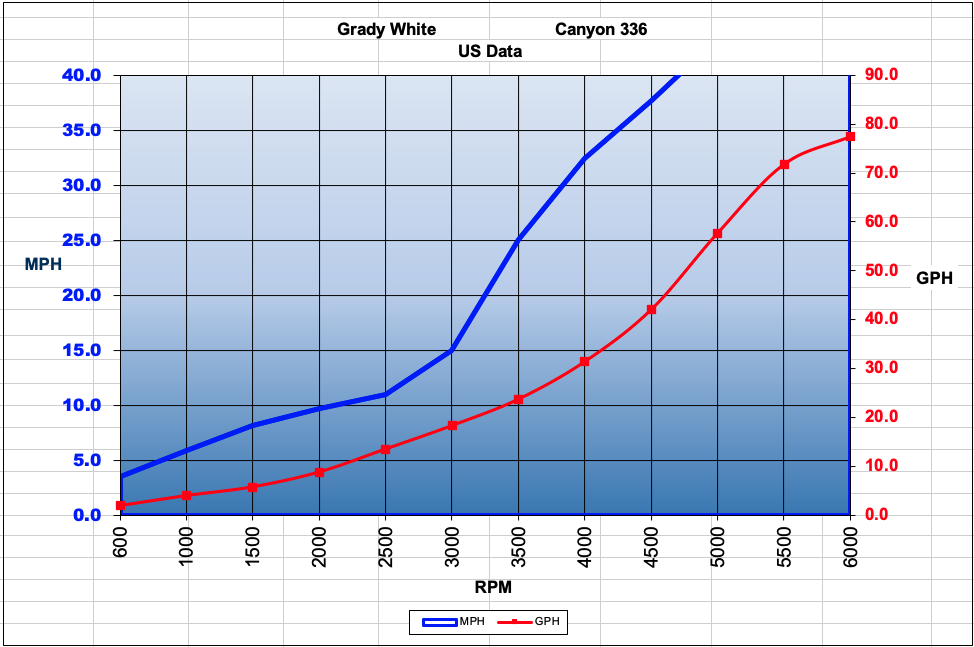 Yes, you can have it all. And it’s all in one package with the Canyon 336.  This model has been around for quite some time, but Grady-White has recently upgraded the boat to include a boatload of features thanks to listening to the voice of the customer.  The result is a 336 that’s better than ever.

The build quality is a lot of what separates a Grady-White from the competition. They all have the characteristic wide flared bow, ala Carolina flare, that conjures up images of the big game fishing boats. There’s a 50+ degree deadrise at the bow for excellent wave penetration. Her trademarked SeaV2® hull design varies that deadrise that reaches 30 – 35 degrees at midships and continues to flare until it reaches 20-degrees at the stern, providing her offshore handling characteristics.

One of the first things Grady-White focused on, in its list of improvements, was the console.  It’s much bigger now and therefore can accommodate new and larger electronics displays.  Our test boat had a pair of 17” (43.18 cm) screens, and if the Yamaha and VHF were to be relocated, the panel could easily accept three 12” (30.48 cm) units.  Because it’s a larger and higher panel, I’d like to see the addition of a step at the deck to elevate the operator.  I’m of average height at 5’8” (1.73 m) and I was occasionally losing sight of the horizon ahead.

The T-Top has been given a re-design that now accommodates integration into the full wrap-around windshield, protecting the operator and observers without having to look through curved glass.  An electrically actuated opening vent is at the top, adding much appreciated ventilation to the helm area. But if that’s not enough, there’s also an option for air conditioning with vents aimed right at the helm seat area.   This will also require the 5kW generator upgrade.

An electronics box is located just above the helm and a zippered PFD storage is just behind.  In addition to the LED spreader lights, there are speakers, courtesy lights, grab rails integrated into the supports, and there is an option to add outriggers.

The top was also redesigned to accommodate the optional SureShade® electrically retractable awning w/Sunbrella® canvas that extends well out to the aft section of the cockpit at the trailing edge.   The new arrangement makes the awning much less bulky, and now the mechanisms are well hidden and protected.

By redesigning the console, Grady-White was able to pick up almost 2’ (.61 m) of headroom inside the cabin, bringing it to 6’2” (1.88 m).  The old electronics box used to drop down and impinge on the available space.  No more.  Now it’s more of a flush overhead.  The 7’4” (2.34 m) berth has also benefitted from a re-design so that it’s not only roomier, but a ratcheting cushion in the middle converts the berth into a sitting area.  Additionally, thanks to more space overhead, six vertical rod racks have been added to this lockable compartment.

Previously an option, the inward opening side door is now standard.  The latching system is exceedingly easy to use, and the door swings on heavy duty hinges.  Because it opens inward and is low to the waterline, there is the added advantage of using it as a boarding location from a floating dock or a tender.

A big change is that the Canyon 336 now comes with a full upgraded control system thanks to the Yamaha Helm Master EX system.  It includes...

The joystick also has +/- buttons so we can adjust the thrust while maneuvering on the joystick.  This isn’t a remarkable feature as all joysticks have adjustable power, but what is remarkable is that others only have a hi/low setting.  This unit, however, allows adjustment through five individual power settings for extremely precise maneuverability.

It gets better.  When trolling at idle speed, start dropping the speed down even further with the – button, and the system will actually start taking the engines in and out of gear… 90% in and 10% out, right on down to 10% in and 90% out for really slow troll speeds.

Those are the major changes.  Some are much more subtle.  All the upholstery has improved stitching that’s not only more appealing, but stronger.  The sound system has been upgraded to a Fusion Apollo series with top of the line Signature Series speakers and a subwoofer to the port bulwarks.

Now let’s go over the rest of the boat’s features, starting with the principle mission of the 336… fishing.

The 28-sq.-ft. (2.60-sq.-m.) open cockpit is the business end of the fishing features.  Padded bolsters run all the way around the boat, and in the cockpit, they top out at 28” (71.12 cm).  Horizontal rod storage is in the bulwarks as is a convenient toe rail.

There’s a 291-qt. (275.39 L) transom fishbox that can be upgraded with a digitally-controlled refrigerator/freezer option.  Alongside the transom door to the swim platform is a freshwater washdown, so cleaning rods is not an issue.  To the port bulwarks, there’s both a fresh and raw water washdown so we can get the whole boat cleaned in short order.

Just ahead at the rigging station, there are two livewells (45-gallon (170.34 L) and 26-gallon (98.42 L)).  The smaller is optional and without that option chosen, it will be a standard 104-quart (98.4 L) cooler.  Between is a cutting board and a freshwater washdown, and all water gets channeled down the angled deck to the aft drains that lead overboard.  Tool holders are just above.  Below is storage that includes a set of four tackle sorters.

Rod storage is the least of the concerns on the 336.  There are six rod holders at the rigging station, four more across the trailing edge of the T-Top, 11 more in the caprails surrounding the boat and we could increase that by six if Grady would swap out the caprail-mounted beverage holders for combination rod/beverage holders.

Speaking of the T-Top, it’s state of the art.  Aside from the plethora of LED spreader lights, there’s an option for adding the Taco outriggers.

At the bow, there’s the ability to remove the cushions and insert a lowered table that will then create a full casting platform.  Under the V-seats, there are 204-qt (193.06 L) fishboxes that, along with all the livewells and aft fishbox, all drain overboard.

Family features have to start with the patented fold-away transom bench seat.  Grady-White was smart to get a patent on this design.  It’s flat-out the easiest we’ve seen to deploy and stow.  At the entrance to the swim platform, there’s a freshwater shower with a hot/cold mixer to clean off after reboarding.

At the bow, the V-lounge seats have standard swing-away backrests that provide either additional comfort or more room for moving about.  Storage is underneath.  A table can be added to increase the functionality, and this can be lowered to form a sunpad with the addition of a filler cushion.  Receivers are built into the caprails to accommodate carbon fiber stanchions that will support a bow sunshade.  A double-wide seat is ahead of the console.

We discussed the improved features of the cabin, such as the new berth layout and higher headroom, earlier in this report.  Further accommodations include a VacuFlush toilet plumbed to a 10-gallon (37.85 L) holding tank.  A sink with Corian counter is right alongside and the pullout sprayer allows for showering in this “wet-head” compartment.  This is plumbed to the boat’s 38-gallon (143.85 L) freshwater tank.  At the aft bulkhead, there’s an enclosed microwave.  If the 5kW generator option is chosen, there is also a water heater option available, and the air conditioning can be run offshore.  Otherwise, the AC is powered from the standard shore power.

We’ve discussed the improvements to the helm console earlier in this report.  Now let’s discuss the remaining features.

Starting at the top of the console, there’s a recessed, padded area for putting the quick drop items. Grady-White thoughtfully added channels to the sides to direct any water that may collect in this area out the sides and onto the deck.  Just below are two carbon fiber panels holding rocker switches with breakers right alongside each switch.  It’s also nice to see the important horn switch standing out in red.  All these switches are flanking a center, dash-mounted compass with heading displays at both the leading and trailing edge.

Below the main 17” (43.18 cm) displays and to the left of the console is a cubby with a padded surface and connectivity.  An Apollo series Fusion stereo is below that.  The helm seats are three across, which allows Grady-White to incorporate a center-mounted helm station for better all-around visibility.  And it’s always nice having extra eyes watching out when underway.  All seats are well-padded and ventilated, slide fore and aft, and all include flip armrests and flip bolsters.  Below are two flip-down footrests in a 1/3-2/3 configuration.  The wider is because there’s a hatch behind that opens to reveal the vessel’s battery banks.

Inside the cabin, there’s an aft storage compartment that is designed to accommodate an optional SeaKeeper 3 gyro stabilizer.  Just above is the vessel’s main power panel.  Battery switches are at the port quarter of the cockpit.

At the bow, there are two 8” (20.32 cm) pull-up cleats and these are the first of six located throughout the boat.  These cleats flank a hatch that opens on a turn and lock latch to reveal a Lewmar windlass leading to a through-the-stem anchor roller.  Two control switches are just to the right.

As for her handling, she’s an exciting boat to drive.  Shove the throttles to the stops and she’ll come up on plane in an average 4.4 seconds, accelerate to 20 MPH in 6.5 seconds and blow past 30 in 11.4 seconds.

Once she’s up on plane, bring the outboard trim up to about the halfway mark on the scale to put her into her optimum running attitude.  There won’t be much change in her running angle, but the props will be more efficient.

Turns are a non-event with an average 15-degree roll into the turn.  There is no chine walk or prop ventilation during the turns, but hard performance turns will have an effect of gripping the water, so a good hold on a grab rail is required.  Average turns eliminate this need.

Any boat with Canyon in her name has to perform well offshore.  And it’s here where the 336 delivers the goods.  Her wide flared bow with its narrow entry delivers.  She’ll slice through the waves with the spray being thrown low and wide for a dry ride.  In a following sea, there’s no hint of stuffing the bow, thanks to the flare providing so much buoyancy.  In head seas, she shows no pounding or hull slap, and if she does catch air, she remains in a level attitude and produces a smooth reentry.

The Canyon 336 is a boat that continues to impress, more so with these latest changes.  Grady-White has always been a company that listens to the customer, and these improvements are an example of exactly that.  She’s an excellent performer, and as an offshore fishing platform, she leaves nothing to be desired. 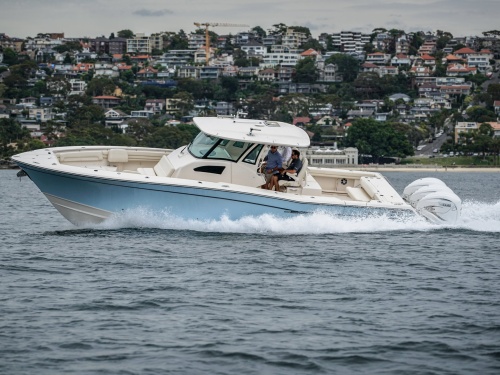 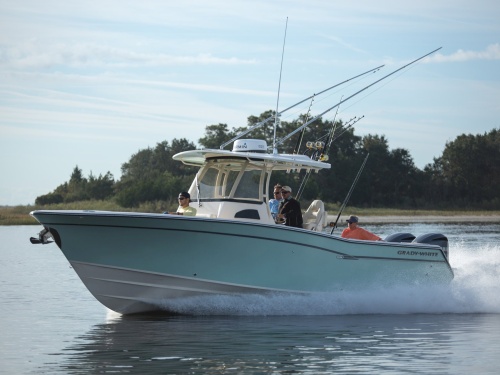 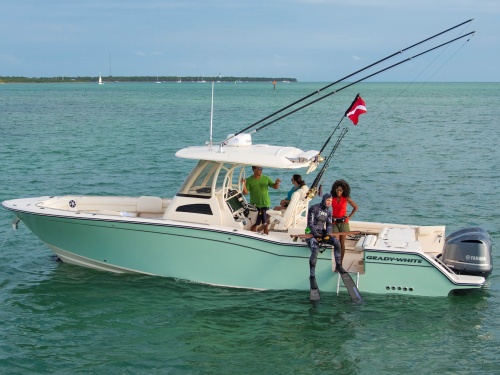