The Pursuit S248 is an “entry-level” center console that’s quite hard to consider entry-level since it’s so loaded with features that belie that moniker.  Probably the only thing that is entry-level about it is its trailerable size.  Even in the standard version it’s well equipped to compete in this highly aggressive market segment. 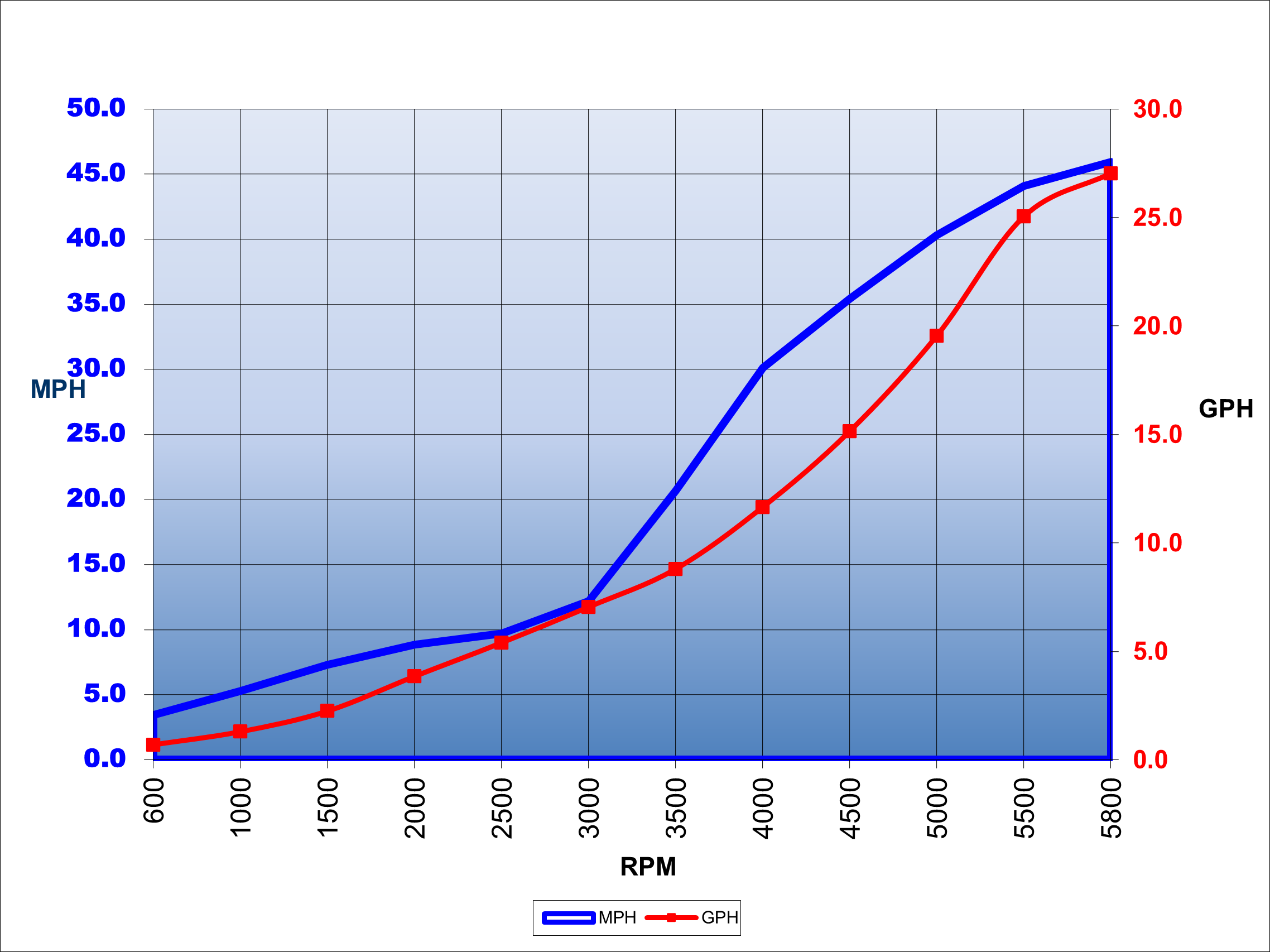 The Pursuit S248 is an “entry-level” center console that’s quite hard to consider entry-level since it’s so loaded with features that belie that moniker.  Probably the only thing that is entry-level about it is its trailerable size.  Even in the standard version it’s well equipped to compete in this highly aggressive market segment.

Now, this is an S-class boat… the S248.  Pursuit used to have its center consoles known as C-class for obvious reasons.  But as the type evolved and more features were added, it became evident that they were much more than just center console boats.  They were true sport boats… and as such they became S-class.

Storage is a big part of the S248.  There’s a lot more storage here that others in this size range simply do not have.  Deck storage to both sides of the cockpit, in the center of the cockpit, in the side bulwarks at the bow, inside the console and at the back console bulkhead, under the two bow seats and between the two in the bow deck.  There’s even storage under the gunwales at the bow.  Places we typically see on larger boats, but in a 25/26-foot range… not so much.

This boat replaces the popular C238 and many improvements have been made.  Most notable would be that Pursuit lengthened the hull by 11” (27.94 cm).  That may not seem like much, but it gave more room in the cockpit, an area that either wins or loses the battle, and behind the helm so heavier captains won’t be sucking a steering wheel into their guts when driving.

As this is the smallest of the Pursuit lineup, the intention is to introduce entry level boaters to the brand and cement the brand loyalty that Pursuit is so well known for.

This was a fun boat to drive for several reasons. First, she doesn't grab into the turns so that you've got to hang on for dear life and brace yourself. Rather, she's got a nice slide that eases across the turn, so you really don't get thrown over to the side. There's also enough banking to that turn so that you're more planted down into the deck. It's quite comfortable.

The electric steering from Yamaha is excellent, so very easy boat to drive and she's very responsive to the helm.   I did notice that I had to drop the trim all the way down when I got into the turns so that we didn't ventilate the props.   Once on plane, bring the trim up to around half on the gauge and that’s where she feels best and runs best.

Another interesting facet is in the 10-15 MPH winds of our test day she tends to lean a little bit into the wind when it’s coming from the port side. I can correct that with the trim tabs and level it out easily enough. Coming from starboard, the torque effect of the propeller seems to cancel that out without needing the trim.

Since the cockpit is the area that wins or loses the “battle of the center consoles”, that’s where we’ll start our inspection.

11” (27.94 cm) have been added to the length of the S248 over the previous C238, and part of that additional space was used in the cockpit.  This space is opened up a bit more by not falling prey to the convention of adding rod holders to the back of the helm seats that always are in the way and causing shirts and elbows to get into a tussle with the reels.  Here the rocket launcher style rod holders are just fine up at the trailing edge of the hardtop.  Now we’re left with an open workspace measuring 35” (88.90 cm) x 76” (193.04 cm) with padded bolsters going all the way around.

At the leaning post there’s a tackle (or napkins and plasticware…) storage drawer with a 45-Quart (42.59L) Yeti cooler on a slide-out tray underneath.

At the transom there’s the usual flip transom bench seat and this one also includes an elevating bolster that rises when the bench is deployed.  At 33” (83.82 cm) it’s double-wide.  At the caprails behind there are rod holders and an optional retractable ski tow pylon ($1260). Alongside and to port is a 24-gal (90.85L) livewell.

In the deck there are two 11-gal (41.64L) fishboxes and both are not only insulated but emptied with a diaphragm pump with a diverter to direct draining to each one or both.  This diverter is in a center mechanical compartment, and we’d like to see that in a more accessible location.  This compartment also includes the bilge pumps, the 4 GPM (15.7 LPM) livewell pump, batteries… etc.  Additionally, Pursuit measures those fishbox capacities by the size of the interior bin only, not from the bottom, all the way up to the lid, as we’ve seen some other builders squeak in.

To both sides there’s under gunwale rod storage holding 9.5' (2.9m) rods in the lower holders and 7.5’ (2.29m) rods in the upper.  There’s dedicated storage for the carbon-fiber poles that support bow ($2155) and stern ($2140) Mediterranean style sunshades.  A freshwater washdown is to one side and raw water to the other.  Rod holders are in the 10” (25.40 cm) caprails that top out at 26” (66.04 cm), exceeding ABYC (American Boat and Yacht Council) standards.  The caprails mounted beverage holders can also hold the typical 30 oz (.89L) insulated cups.

Access to the platforms is via a starboard side door that opens to an 18” (45.72 cm) wide walkthrough.  The door is held open via a magnetic catch and most impressive is the “doggie-door” style opening at the bottom to help shed any shipped water in short order.  This, in addition to the large deck drains to both sides.

As for the platforms themselves, they’re probably the largest in class.  Pursuit measured the entire swing of the Yamaha F300 outboard and from that they built the molded platforms just outside that swing range.  The result is immediately noticeable as each platform is a full 30” (76.20 cm).  They come out from the transom 45” (114.30 cm).  The platform to the port side has an in-deck aft anchor storage locker that is self-draining.  In addition to the compression latch there’s also a post and socket arrangement to hold the hatch and that seems a bit of an overkill and just makes the hatch harder to open.  But high marks for the extra effort.

In the center of the two platforms there’s a hatch that is usually used to accommodate tilting the engine out of the water, but this is just to cover the already orderly rigging.  Flip it open to access the rigging and close it to create a service platform or make for easy transitions from one side to the other.

Even with the large leaning post there’s still 16” (40.64 cm) to each side to accommodate the transition forward.  Keeping with the theme of “storage everywhere”, by bringing out the bulwarks just a bit Pursuit was able to create storage compartments under the bulwarks to both sides.  As the sides jog back in it creates a recess for the swivel seatbacks for the bow seating.  Even with the bulwarks jutting out there’s still 19” (48.26 cm) of walk space.  More than we typically see in boats in this class.  Cockpit depth is 30” (76.20 cm).

As for the forward social zone, it starts with 4’ (1.22m) lounges to both sides, again with optional swivel seatbacks ($1630) that lock into position thanks to the notched pedestal.  They don’t quite meet at the bow but instead remain 15” (38.10 cm) apart.  While others may put an aft-facing seat across the two, Pursuit kept the forward area open allowing easier access to the foredeck and working the ground tackle at waist high.

Both lounge seats have insulated storage underneath and they’re self-draining.  There are padded bolsters to the sides with storage shelved underneath making an ideal location for those rolled up beach towels.  Order either the optional bow table ($1610) with its dedicated storage in the head compartment, or the filler casting platform with filler cushions ($855) that converts the whole area into a sunbed.  Cavernous storage is in a deck compartment.

The seat ahead of the console is a full 39” (99.06 cm) wide so it extends fully to the outer limits of the console.  There are flip armrests to both sides and the upholstery is diamond stitched.  The seating is part of a forward door that opens to access the compartment inside.  Here, there’s a standard Porta-Potti that is, by definition, easily removable for those who choose to utilize the compartment more as another storage space.  For those that want to upgrade the head functionality, choose the electric marine toilet with a 6-gallon (22.71L) holding tank and macerator ($3105).  There’s also an option to add a stainless-steel framed opening portlight with a removable screen ($675).

At the foredeck there’s a hatch over the ground tackle.  Our test boat had the optional anchor windlass ($1475) and polished stainless-steel anchor ($595).  Most times we see the installation of the mounted anchor and windless or a beach reboarding ladder, not both.  Pursuit managed to get them both together by offsetting the optional bow reboarding ladder ($1200) to the starboard side.  Again, something unheard of in this class.

The helm starts with tempered glass to three sides of the powder-coated frames.  The compass is correctly mounted in-line with the helm and there’s a small cubby alongside with a padded base that we’d like to see fitted with an inductive charger.

Below, there’s room for dual 12” (30.48 cm) Garmin displays ($12,795 + $8535).  It’s interesting to note that Garmin representatives that work in-house at Pursuit are the ones doing the electronics installations.  This practice allows for certain benefits from Garmin to Pursuit customers.  For example, Garmin techs audit each application, present system certification of approval and sign Quality Control reports. A Garmin representative also provides a two hour onboard orientation for every customer who purchases factory-installed Garmin Electronics.

These displays are mounted high on the panel, and then the electrical switches are mounted below.  This gives visual priority to the displays and as such they’re not blocked by the wheel.  As for the switches, even they are grouped accordingly with the more often used ones in the higher row.

The helm seat is 46” (116.84 cm) wide and includes flip bolsters and armrests to the outsides.  An upgraded helm seat ($3510) includes four armrests, articulating flip up bolsters and fore and aft adjustment.  It also includes the Premium Edson wheel with stainless-steel knob.

The hardtop is standard on this “entry level” boat and includes powder-coated frames and grab handles.  There are also speakers, courtesy lights, spreader lights and an overhead E-Box.

One could ask what reason there is to focus on the S248 instead of the hundreds of other center console’s flooding the market, and that’s a fair question.  The answer is simple but multi-faceted.  Aside from the build quality of a Pursuit, this center console is among the most loaded and feature packed that we’ve seen.  Pursuit doesn’t do anything piecemeal, and this is another example of taking something, that should be so simple, and making it better than the rest.  And therefore, more attractive. 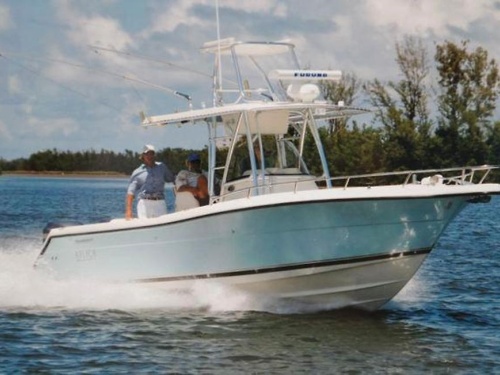 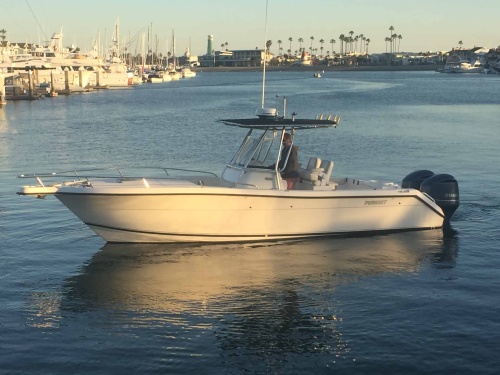 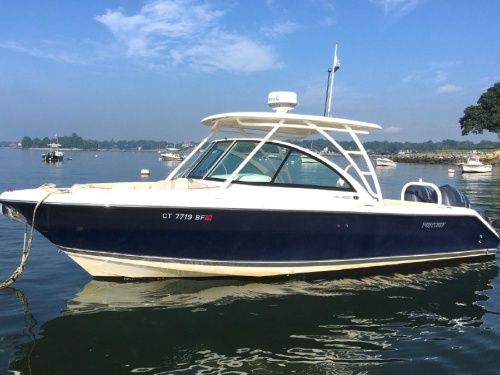 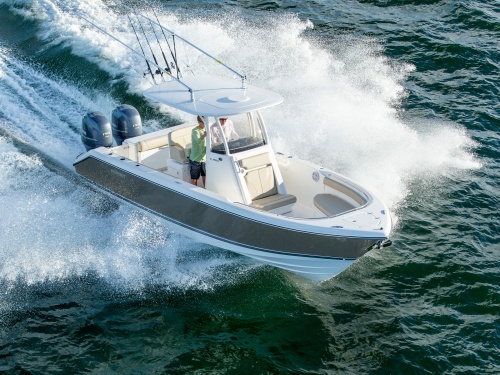